The world’s most Instagrammable bathrooms

‘Where have they gone?’

That’s what your dining or drinking partner might wonder after you step into one of these bathrooms.

MailOnline Travel has toilet-hopped around the world to find the most Instagram-worthy loos which, were you to visit, would keep you snapping away for quite some time.

For a taste of the bizarre, Sketch in London has installed giant egg-shaped cubicles in its dining establishment, making it feel as if you might have stumbled upon a dinosaur’s nest.

Or if you’re after something a little more opulent, the mirror and marble-clad restroom at the Brasserie of Light restaurant, also in the British capital, promises to impress.

For the ultimate hipster snap however, head to the graffiti-riddled loos at Welcome to the Johnsons in New York’s Lower East Side, once frequented by Lady Gaga. Scroll down… urine for a few surprises.

You might need your sunglasses for the mirrored marble bathrooms at the Brasserie of Light restaurant in London.  The interior design was completed by the renowned Martin Brudnizki. Along with impressive bathrooms the restaurant, which is located within the Selfridges department store, features London’s largest-scale artwork by Damien Hirst – of a flying horse 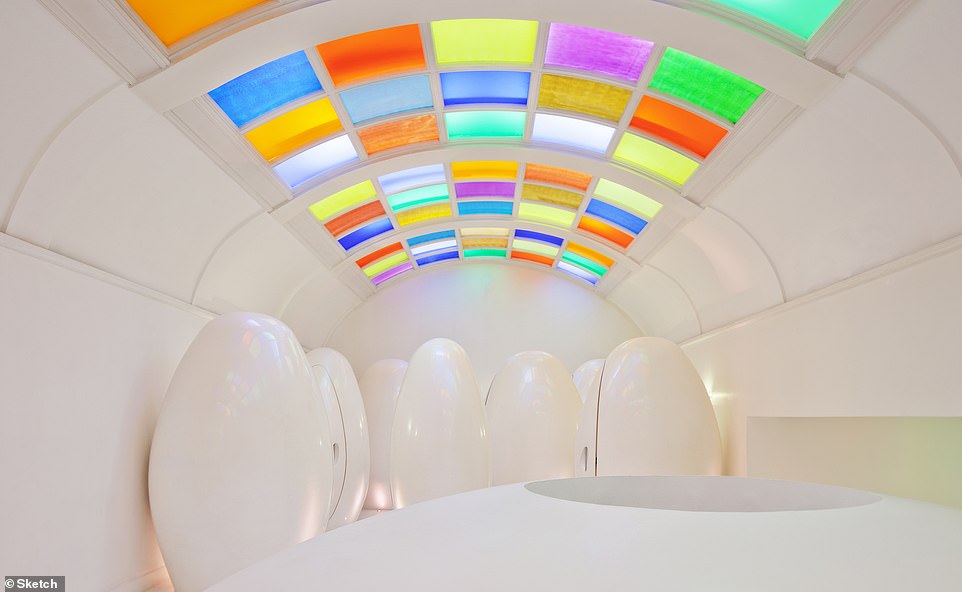 You might think you’ve stepped on to another planet after venturing to the kooky bathrooms at Sketch in London. The restaurant and bar complex features egg-shaped male and female cubicles, with a clinically-white colour theme running throughout the toilet area. Conveniently placed mirrors enable customers to capture Instagram-worthy snaps 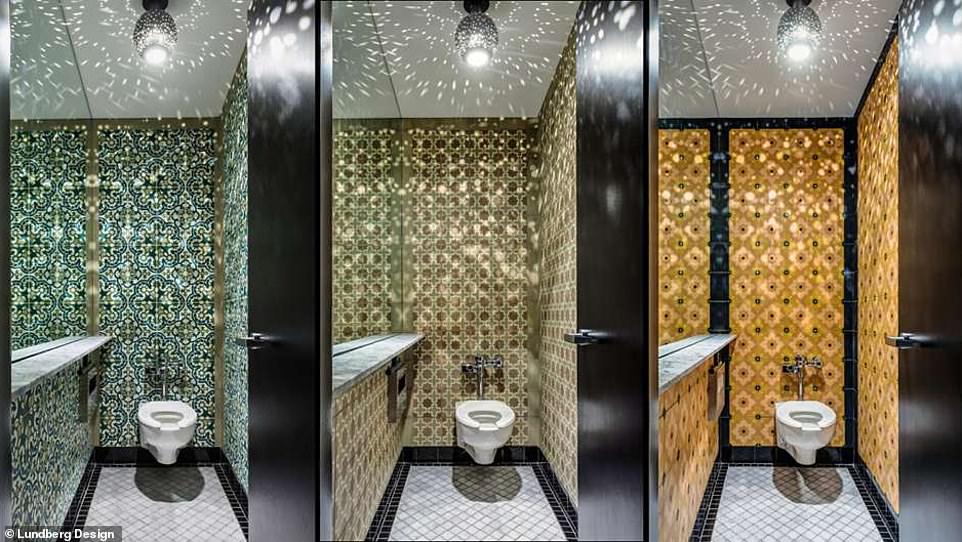 Transport yourself to Morocco with a trip to the bathrooms at Mourad in San Francisco. The restaurant washrooms feature intricate mosaic tiles running from floor-to-ceiling and twinkling lanterns. Mirrors inside the unisex stalls create a kaleidoscope effect and give the feeling of more space 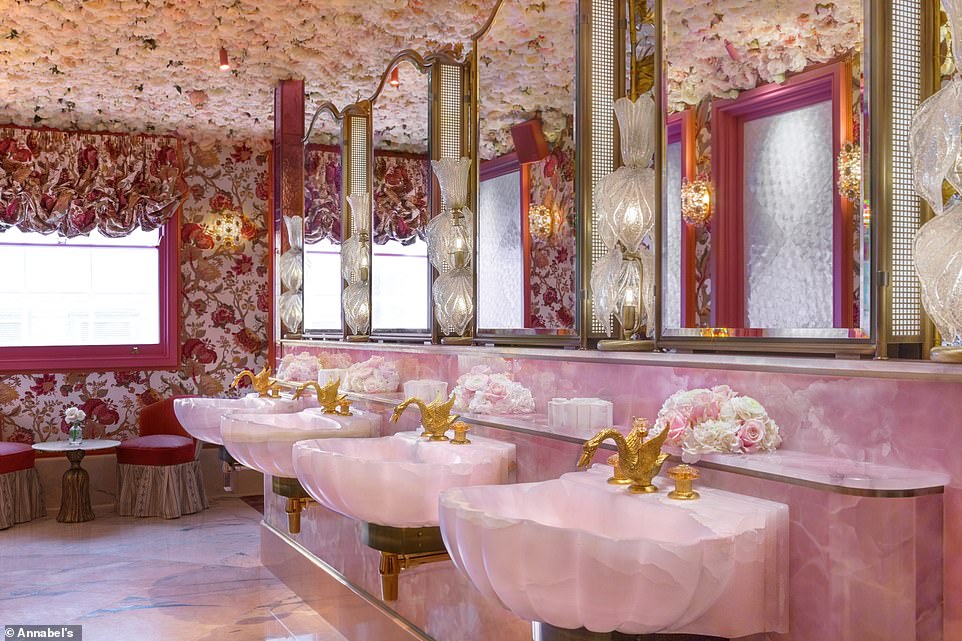 The women’s powder rooms at top London private members’ club Annabel’s – which has hosted everyone from Frank Sinatra to Leonardo DiCaprio – could keep you entertained for quite some time. The bathrooms, designed by Martin Brudnizki, the man behind the breathtaking innards of Sexy Fish and The Ivy, feature a ceiling carpeted with fake roses, gold bird-shaped faucets, natural stone wash basins and a marble floor 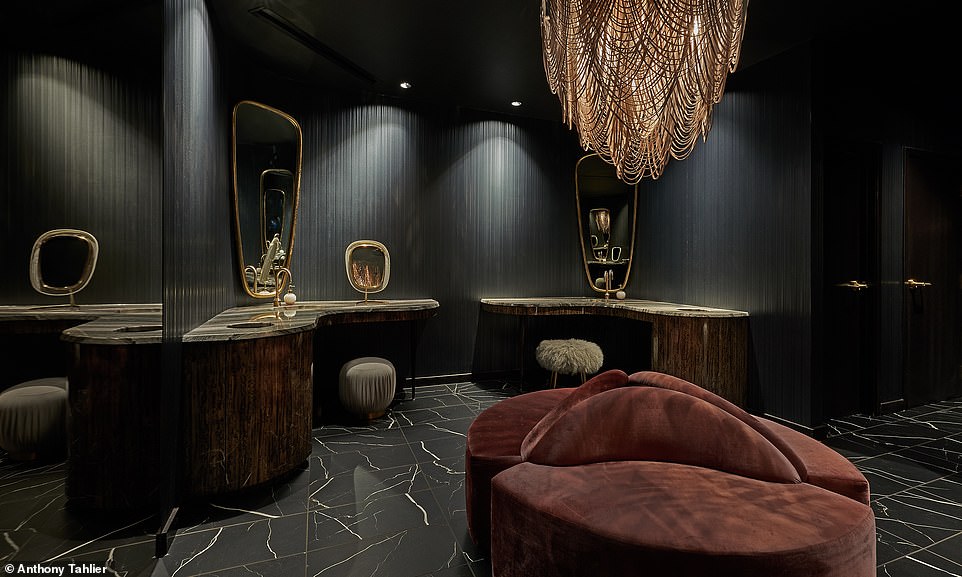 Looking more like a sultry lair than a place to powder one’s nose, the toilets at Blvd restaurant in West Chicago ooze Art Deco chic. The eatery draws inspiration from the Golden Age of Hollywood, with brushed brass detailing, ebony interiors and impressive light fixtures. The restroom includes a circular banquette to recline on and dressing tables so you can make sure your hair and lipstick is in check 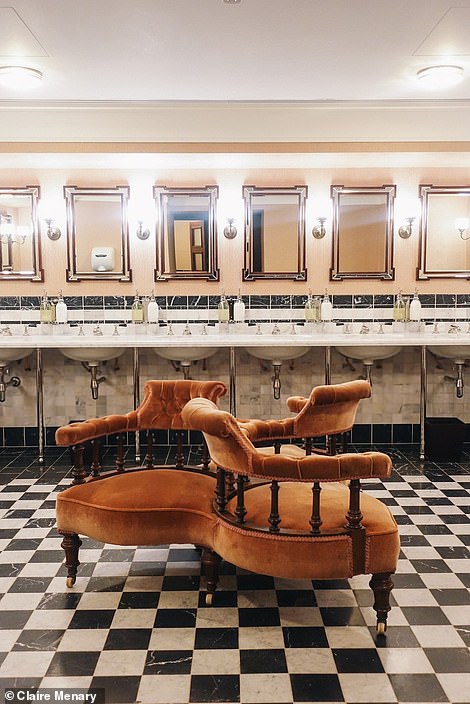 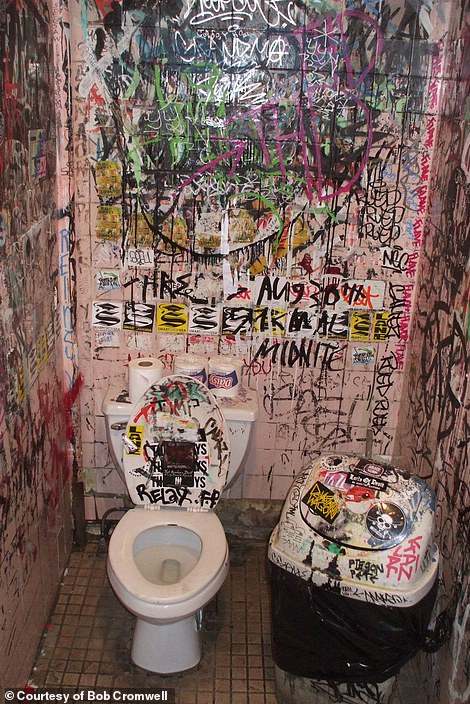 The Ned in London is one of the city’s hottest venues with eight different restaurants to choose from and a buzzing Great Gatsby-esque atmosphere. This makes the toilets (pictured left) a popular place for Instagrammers, who want to prove they were there. Right, for the ultimate hipster snap, head to the graffiti-riddled loos at dive bar Welcome to the Johnsons in New York’s Lower East Side, once frequented by local Lady Gaga 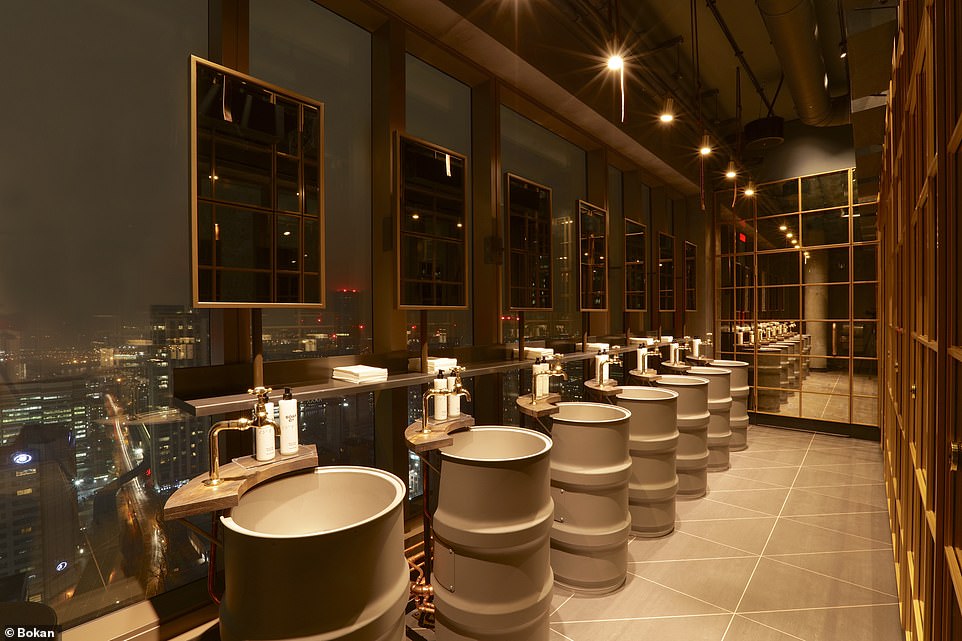 You might be delayed in the bathroom at Bokan in London, as you stand transfixed by the sky-high views. The trendy restaurant, located on the 37th floor of a tower in the City’s financial district, boasts floor-to-ceiling windows in its toilets 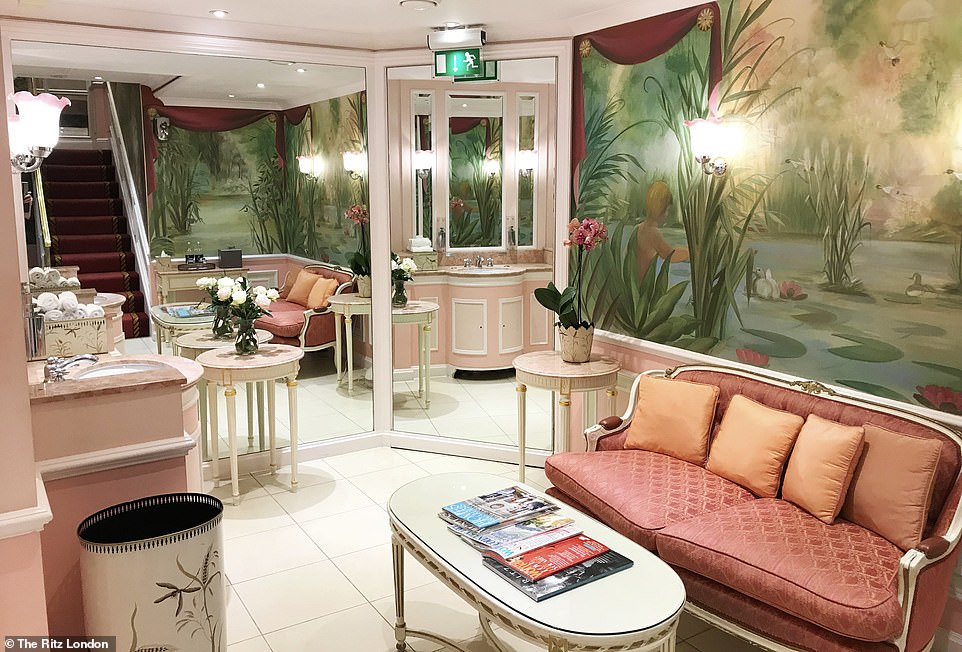 The classical bathrooms at The Ritz London invite guests to take their time, with mirrors to freshen make-up, a sofa to recline on and magazines to peruse.  Many people head to the hotel and restaurant to snap a photo of the famous establishment, which Jackie Onassis once described as being ‘like paradise’ 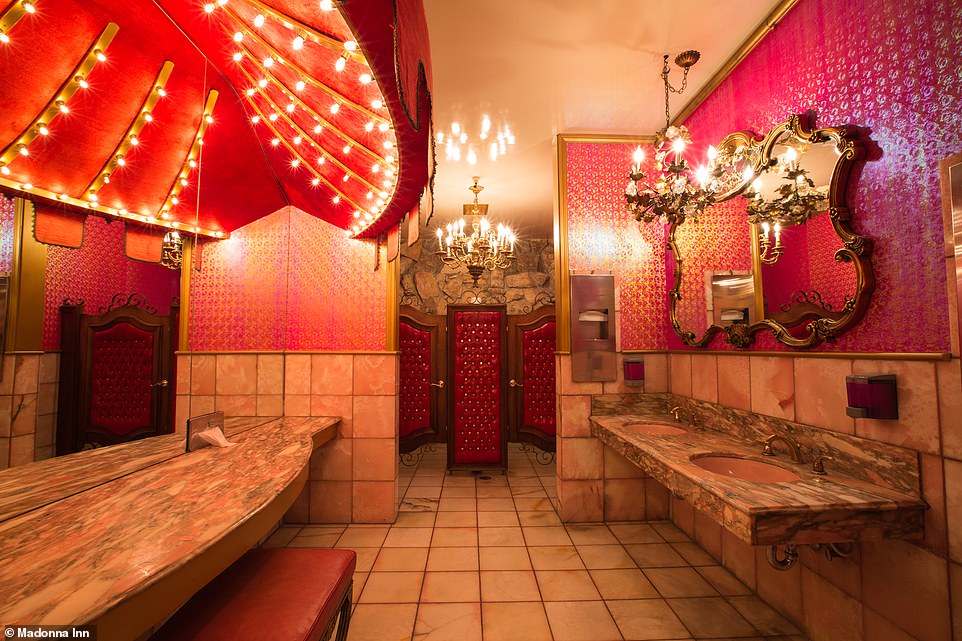 The Madonna Inn in San Luis Obispo, California, has a hot pink theme in its utterly eccentric restaurant bathroom. The washroom is decked out with theatrical gold framed-mirrors, chandeliers and buttoned leather-clad cubicles 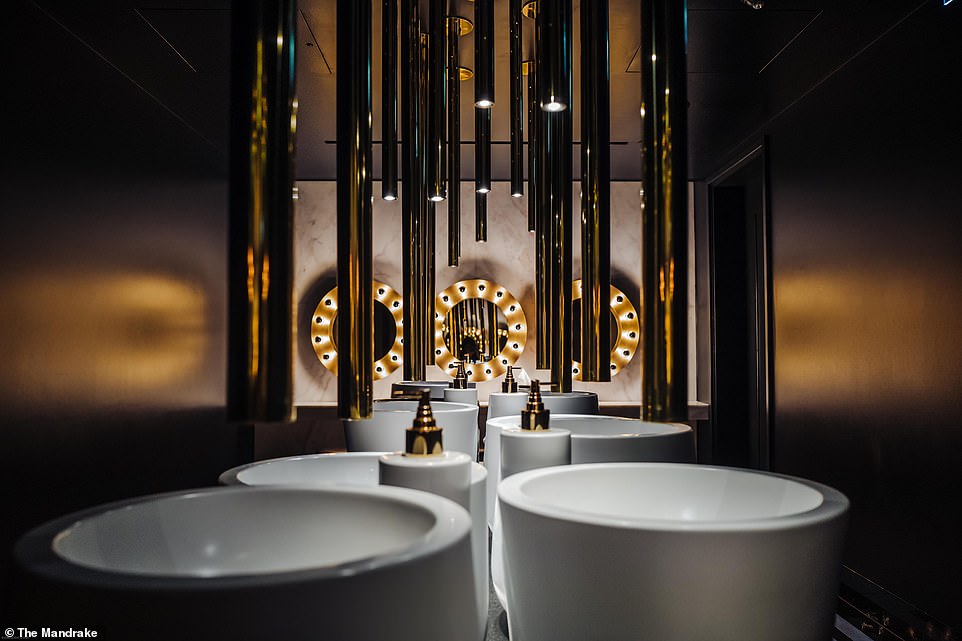 The Mandrake hotel restaurant bathrooms regularly pop up on Instagram for their sultry interiors. The wash basin area is dimly lit with a contemporary light fixture dominating the space. Instagram user @sforester86 took a photo of the space, captioning it: ‘If Carlsberg did a bathroom, The Mandrake has absolutely nailed it’ 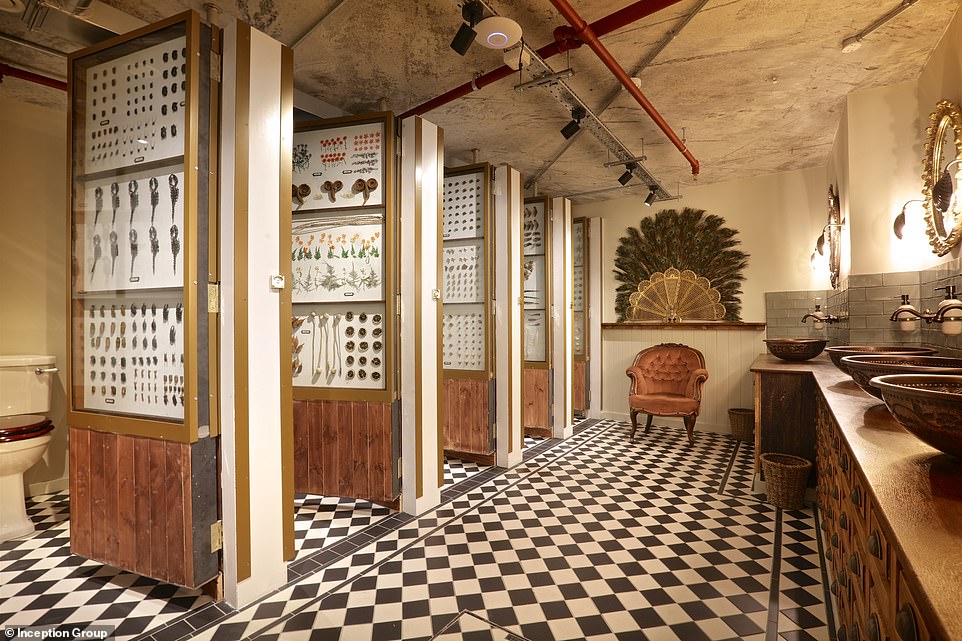 More like museum archives than lavatories, the bathrooms at the exploration-themed Mrs Fogg’s bar in London feature old collectors drawers and the toilet doors double up as display cabinets. The cases feature an eclectic mix of items from wild flowers to exotic-looking beetles 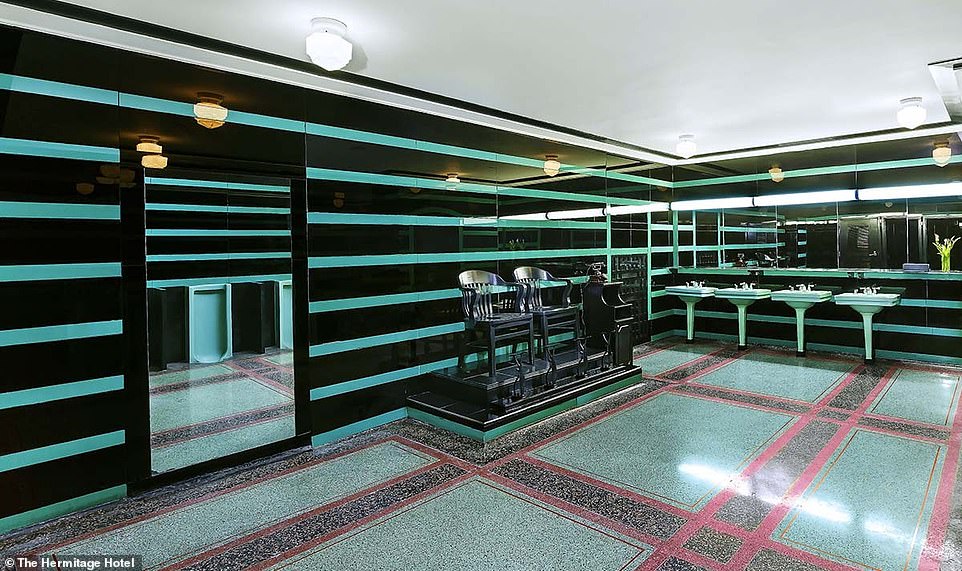 The Hermitage Hotel in Nashville, Tennessee, has some pretty nice rooms and restaurants but many visitors pop in to catch a glimpse of the zany ground-floor men’s bathroom. The unique toilets are art-deco in style with gleaming lime-green-and-black leaded glass tiles, lime-green fixtures and a two-seat shoeshine station. There is also a working telephone that connects to the front desk. It was once voted ‘America’s best restroom’ and continues to be a popular pit stop 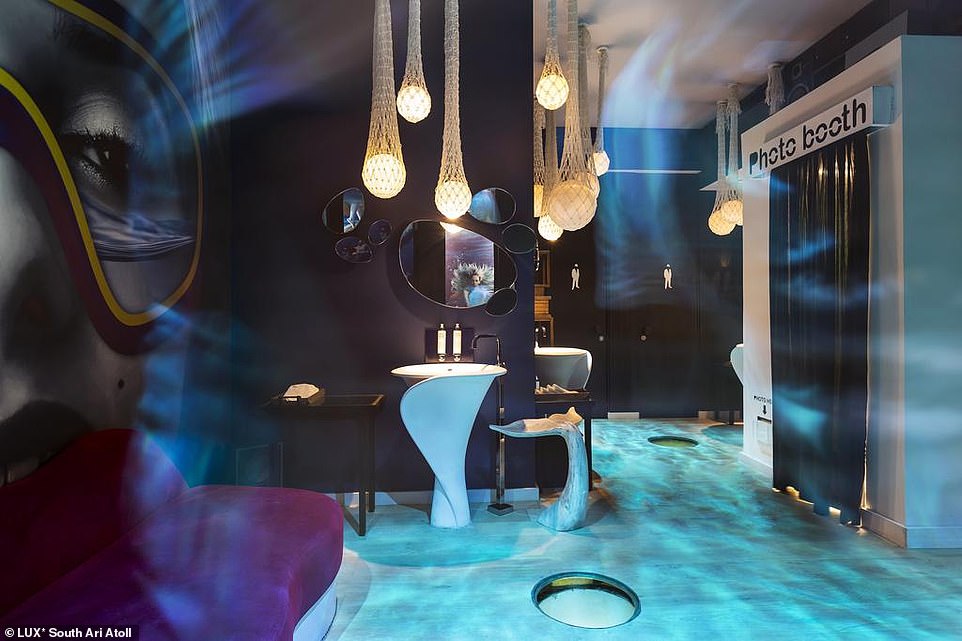 One of the restaurant bathrooms at the Lux South Ari Atoll resort in the Maldives is pretty bizarre, with old fishing buoy-themed light fixtures and a whale tale-shaped seat in front of the wash basin. Pebble-shaped mirrors allow toilet-goers to snap selfies in the surreal space or there is a photo booth by the unisex cubicles that does all of the work for you 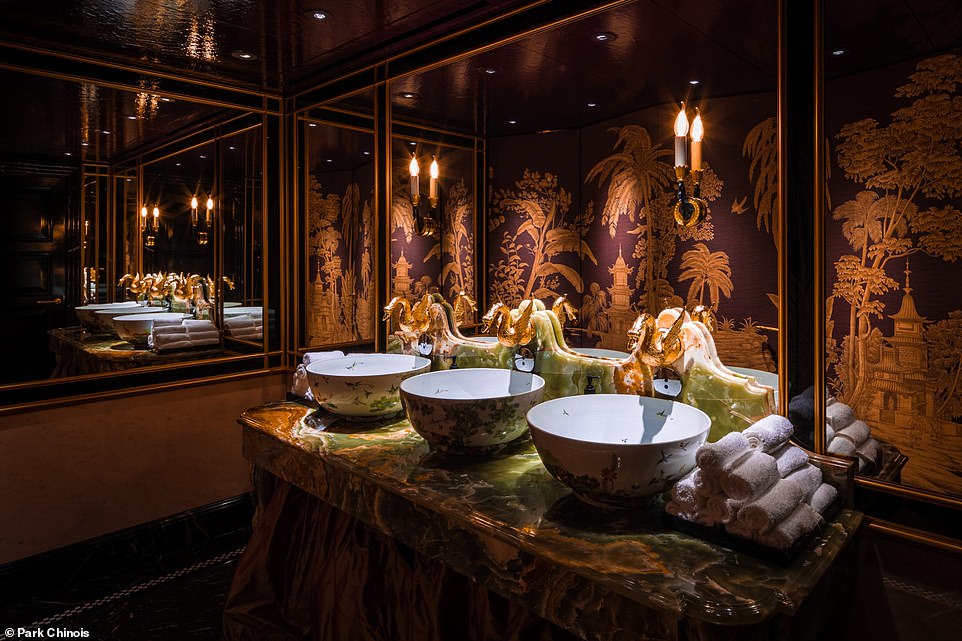 The managers at one of London’s hottest Mayfair venues, Park Chinois, say that the bathrooms have become quite the haven for Instagrammers. The swanky washrooms at the restaurant and cabaret venue are pretty lavish, with a washbasin stand fashioned out of thick chunks of marble, washbasins adorned with delicate Chinese-style art and gold faucets shaped like swans. To top it off, there is exotic chinoiserie wallpaper and candle flame light bulbs to add to the sultry 1930s Shanghai feel