The Writer review: A fiercely intelligent swipe at the status quo

In one of several grimly recognisable scenes in Ella Hickson’s electric new play within a play, a male director dismisses a female writer’s sexism-slamming scene as merely ‘a rant’.

Happily, you’d have a hard time slapping such a reductive label on the real-life production, which takes a swipe at the patriarchy and capitalism with anger, yes – but also with a coruscating intelligence and a great deal of humour.

We begin with another male theatre bigwig needling a young female audience member about why she didn’t like his play. 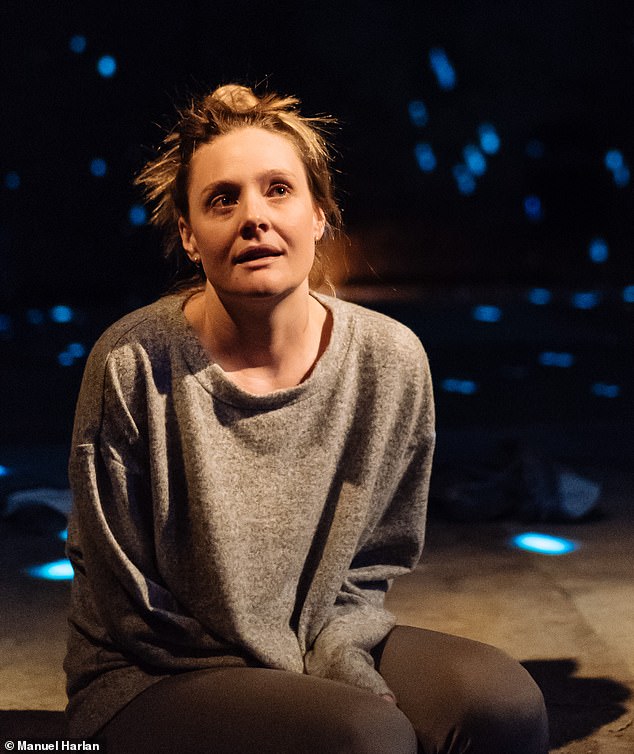 She launches into a tirade about everything that’s wrong with theatre – ‘It’s just famous people doing boring things badly.’ Titillated by her rage, he asks her to write something for him.

But it turns out that they’ve met before; when she was 18, he demolished her confidence by offering her a job and then trying to kiss her.

This exchange feels over-egged but it soon transpires why: it’s a performance. The next moment the sparring pair are actors taking part in a Q&A session about whether the scene ‘has legs’ as a full production. 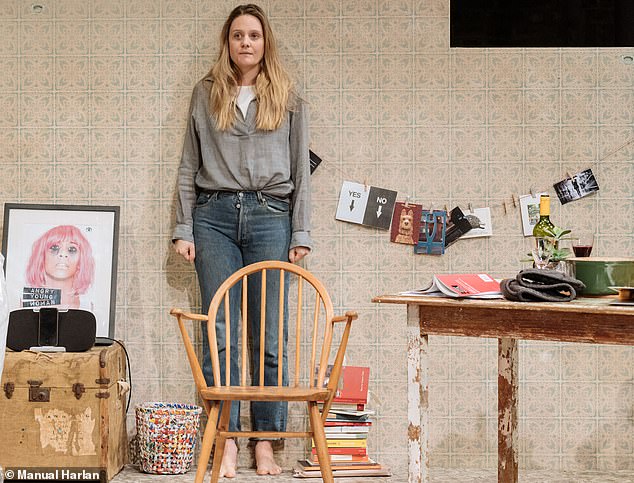 This is a play fizzing with ideas – about the function of theatre, the way women’s voices are silenced or stolen by men, and how humans are drawn ineluctably to power

What follows is an account of a nameless woman, the eponymous writer (Romola Garai), pushing back against the status quo while her play gets staged, although a linear narrative is rejected in favour of allowing disparate scenes to melt into one another with time, place and character undefined.

But, as is fitting in a play about dismantling prevailing power structures, the women are the real stars here. 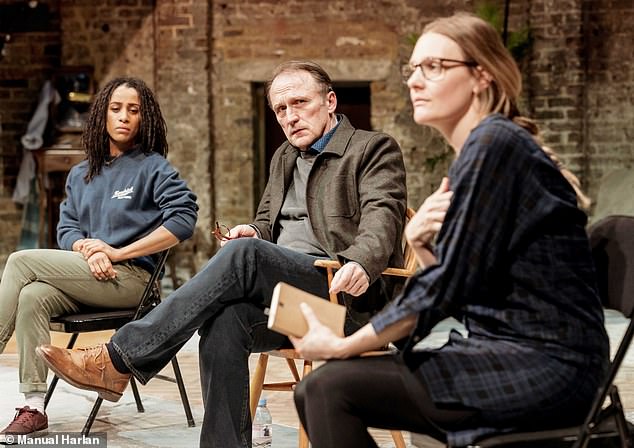 Samuel West and Michael Gould are equally robust as slimy art world elders. But, as is fitting in a play about dismantling prevailing power structures, the women are the real stars here

Lara Rossi radiates calm candour as a fiercely articulate artist and a wounded lover; Garai gives a masterfully subtle portrayal of her character’s progression from nervy idealist to blokeish rebel.

This is a play fizzing with ideas – about the function of theatre, the way women’s voices are silenced or stolen by men, and how humans are drawn ineluctably to power – and Blanche McIntyre’s beguilingly staged production provides room for them all to be explored without (until the final scene) sacrificing pace.

Theatre is ‘meant to heal us’, runs one of the writer’s lines. In an era of sexual-misconduct revelations and the gender pay gap, this passionate, progressive play is an invigorating tonic.

First you put on headphones. Then Simon McBurney, of Complicité, tells us a story based on the adventures of Loren McIntyre, an American photographer who went to Brazil in 1969 and made contact with the Mayoruna tribe.

McIntyre eventually discovered that not knowing their language didn’t matter, as they conversed using wordless telepathy.

The same happens with the audience. The stuff coming into our ears is newfangled ‘binaural’ sound. 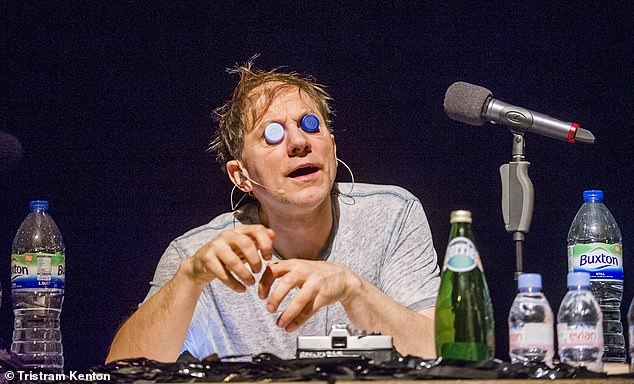 Simon McBurney (above) tells us a story based on the adventures of Loren McIntyre, an American photographer who went to Brazil in 1969 and made contact with the Mayoruna tribe

It’s 3D noise. So you don’t need a theatre set. You are right there in the steaming forest, with howler monkeys, bird calls, crashing rain, jaguar growls. The jungle becomes hallucinogenic.

McBurney acts all this out. Theories of neuroscience and shamanism are explored, and you get a bit lost – but in your own imagination – in this jungle of a narrative under a tree canopy of almost tangible sound. This show is astonishing.

The BBC has a lot to thank Baz Luhrmann for – it was his much-loved 1992 film Strictly Ballroom that helped (in title at least) inspire the light-entertainment behemoth that is now known simply as ‘Strictly’.

It was the Aussie’s debut movie too, a knowing tale of true love and the struggle for self-expression against authority set in the glitzy, bizarre ballroom bubble of fake tans, tortured hair and rictus smiles of over-bright gnashers.

It’s really The Ugly Duckling by way of Cinderella as Fran the gawky, plain beginner is taken up by wannabe champion Scott. 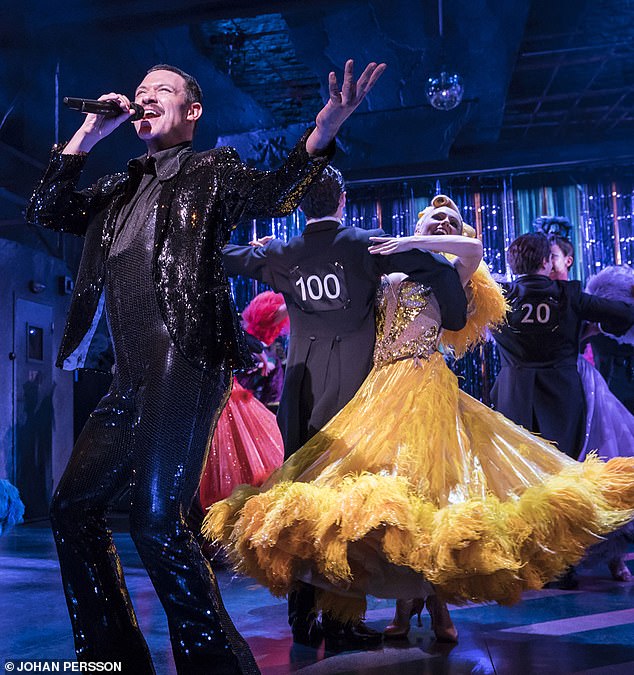 He’s been dumped by his bratty partner after losing a contest for using his own rule-breaking dance steps and defying the Federation chief, a dodgy type in a Trumpish toupée.

A mischievous figure, all moustache and black sequins, he pleasingly performs the iconic pop songs that make up the score (like that other Aussie hit, Priscilla). 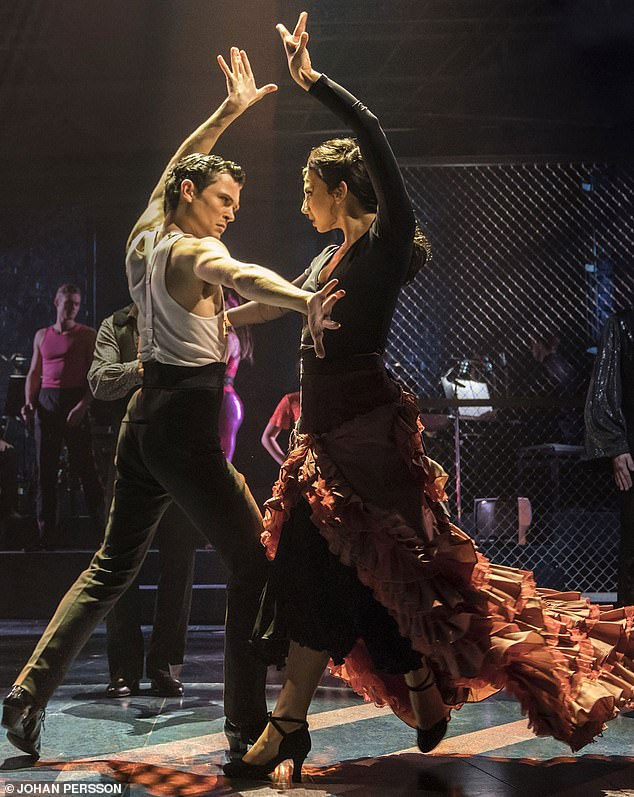 The budget seems to have been splurged on the costumes, though the overall visual flashiness dilutes the show’s emotional content. It also lacks satirical subtlety and charm. Some of the jokes are awfully laboured too.

The show’s upbeat tone, as decency waltzes off in triumph, will please many. But in Strictly judge Craig Revel Horwood’s parlance, it’s neither a ‘disaaaaaaster, dahling’, nor ‘fab-u-lous’.

Much Ado About Nothing

This (mostly) breezy Shakespeare comedy that takes us from ado to ‘I do’ is set, in Simon Dormandy’s sunny production, in a spa in Sicily.

It’s a neat concept, Sicily emphasising the patriarchal elements of the play, and there’s a mafioso Don Pedro returning from a turf war.

The focus as always is the will-they, won’t-they relationship of Beatrice and Benedick, all bons mots and barbs, until they are brought together by trickery. 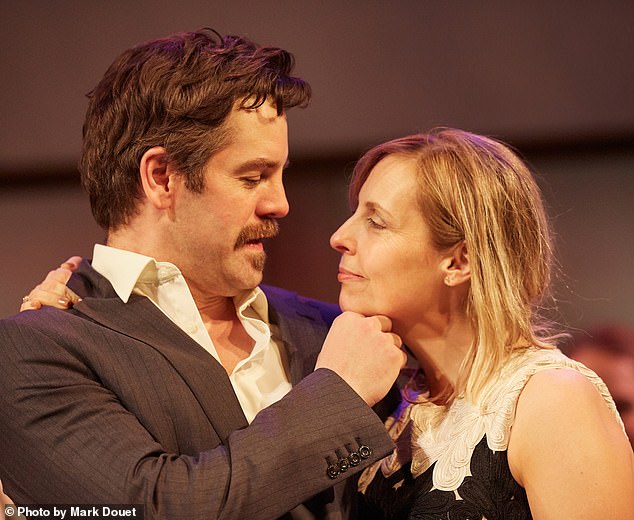 As Beatrice, Bake Off ex Mel Giedroyc over-eggs this particular cake, relying too much on comedy shtick (Catherine Tate did the same in 2011).

John Hopkins’ Benedick, though, transforms appealingly from misogynist to infatuation with goofy charm.

The subplot of Claudio’s betrayal of Hero at the altar might sit uneasily here, though as the bitter groom, Calam Lynch is a suitably callow yoof.

Much ado and fun – but not enough feeling.