One of the first patients to benefit, former pilot Sarah Brown, has revealed how the therapy has transformed her health

For patients with the incurable nerve condition multiple sclerosis (MS), there is often little hope. In the early stages, symptoms such as muscle weakness, fatigue, pain and even depression come and go.

As the disease progresses, patients lose their ability to walk and are often consigned to a wheelchair, facing an early death.

Medication can ease discomfort and improve physical problems but at present there is nothing that will stop the march of the illness.

But now, remarkable results from an NHS study into groundbreaking stem cell therapy has led experts to cautiously suggest it may halt MS from worsening, and in some cases lead to long-lasting remission.

The disease, which affects 100,000 Britons, occurs when the immune system turns on the body, attacking healthy nerve tissue. The stem cell procedure effectively resets the body and stops this process from occurring, experts claim.

About 60 patients have now been treated as part of the ongoing study at London’s King’s College Hospital and Imperial College Healthcare and doctors say that the effect has been dramatic for some.

At a cost of £35,000 per patient, the price is comparable to a single year of MS drugs.

One of the first patients to benefit, former pilot Sarah Brown, has revealed how the therapy has transformed her health. Once a keen marathon runner, Sarah was diagnosed in 2009, and her condition deteriorated rapidly. Two years ago the pain in her legs and hips was making walking for more than a few yards impossible.

The 42-year-old from Cheltenham said: ‘If it wasn’t for stem cell therapy, I may well have been in a wheelchair by now.

‘I’ve recovered sufficiently to go back to work, which is something I thought I would never be able to do. I won’t run marathons again but I’ve regained my independence. It has turned my life around.’

The procedure, hematopoietic stem cell transplantation (HSCT), is similar to the one used to treat leukaemia, and was once known as a bone marrow transplant.

After Sarah’s husband Bob, 47, came across the UK study while researching treatments online, her neurologist in Bristol agreed to refer her to haematologist Dr Majid Kazmi at King’s College Hospital, an expert in the field.

Dr Kazmi said: ‘We have known for some time that patients with multiple sclerosis who also develop leukaemia seem to experience remission from their MS symptoms after HSCT. Treating the cancer meant the MS got better too. 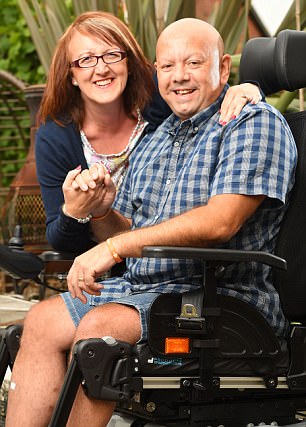 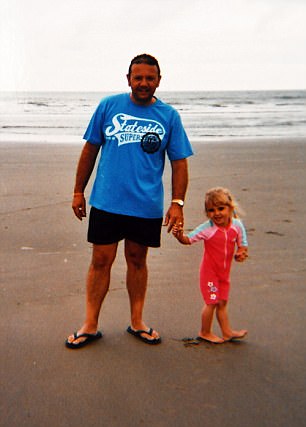 Desperate to walk again: Roy Palmer and his wife Helen (left) wish he was able to use his legs again (he is pictured right with his daughter in 2007)

‘Immune system cells are made in the bone marrow, and during HSCT the patient’s existing bone marrow is killed off with powerful drugs then replaced with a transfusion of stem cells.

‘After the procedure, we have seen the immune system return to a more normal state.

‘One of our first patients was treated in 2009. His MS was so bad that he would not have been expected to live more than a few years, but he is still alive today.’

HSCT is carried out in stages. First, patients are given low-dose chemotherapy drugs and medication to stimulate the bone marrow to secrete stem cells into the blood.

About six ounces of blood is taken and then processed in a laboratory machine to extract the stem cells, which are frozen and stored. Once this has happened, the patient is given more powerful chemotherapy, which kills off existing bone marrow, over a week.

As this knocks out the immune system, the patient must be kept in isolation as even a minor infection can be fatal.

Finally, the stem cells are defrosted and reintroduced via a blood transfusion.

These cells find their way through the circulation back into the bone marrow, where they reproduce and create new, healthy tissue.

‘We aim to give patients about two to three million stems cells per kilogram of body weight,’ explained Dr Kazmi. ‘In most cases, the small amount of blood we take gives us far more than we need.’

The patient remains in isolation for a further two to three weeks as their bone marrow begins to create immune system cells. ‘The main aim of this treatment is to halt further damage caused by MS,’ added Dr Kazmi. ‘For those with significant disability, we don’t expect a dramatic transformation.

‘If they are in wheelchair, they are likely to stay in one. But they may not get worse. And there have been very good results with patients with earlier-stage MS.’

Researchers from Imperial College London published results last year from HSCT trials in 25 centres in 13 countries. Out of 281 people who had the treatment, nearly half benefited for as long as five years, according to their paper in the Journal Of The American Medical Association.

Roy Palmer, 43, is about to embark on the second stage of his HSCT treatment after having his first round of chemotherapy. Next week he will have more chemotherapy, followed by his stem cell infusion and five weeks’ isolation.

The father-of-two from Quedgeley, Gloucestershire, has spent a decade in a wheelchair and has a form of the disease that will get steadily worse.

He said: ‘My daughter Aby, who is 12, was just a toddler when I went into my chair and she doesn’t remember her dad when he could walk. To be able to walk out of my front door would mean the world.’

lDetails of the criteria for inclusion on the trial can be found on the MS Society’s website, mssociety.org.uk.