Theresa May has ruled out calling a General Election before Brexit, saying it would not be in the national interest.

The Prime Minister moved to scotch suggestions of a November poll after reports that Downing Street officials had war-gamed a winter vote.

After losing the Conservatives’ overall majority in the House of Commons in the snap election which she called in 2017, Mrs May is generally thought to be wary of taking the risk of going to the country early again.

Under the Fixed-Term Parliament Act, no general election is due to be held until 2022.

But there have been reports that some within her administration believe a fresh poll could give her the comfortable majority she needs to drive through a Brexit deal in the face of increasingly robust opposition from both the Leave and Remain wings of her party.

Some Brexiteers have predicted that up to 80 Tories could vote against any deal based on the blueprint for future relations with the EU agreed at her Chequers country residence in July.

And there are believed to be enough pro-EU Tories in the Commons to block a harder Brexit deal by voting with Labour, Liberal Democrats and the SNP.

Mrs May’s comments come amid increasingly vocal demands from Labour for an early election, with shadow chancellor John McDonnell sending a challenge to the Government to ‘bring it on’. 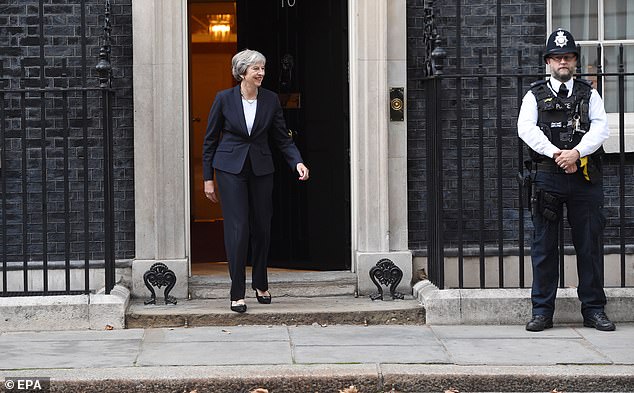 Mrs May moved to scotch suggestions of a November poll after reports that Downing Street officials had war-gamed a winter vote. She is seen outside Number 10 on September 17

Speaking at Labour’s annual conference in Liverpool, Jeremy Corbyn confirmed that his party is ready to vote down any agreement Mrs May reaches with Brussels if it does not meet six tests set out by shadow Brexit secretary Sir Keir Starmer.

Mr Corbyn told the BBC that in this scenario, ‘the greater likelihood is that the Government will then collapse itself and we’d have an election in which I hope the people of this country would make it a choice of a different government that was serious about our relationship and serious about protecting trade.’

Any Commons vote on a Brexit deal is expected to come after the middle of November, when a special Brussels summit is mooted to try to finalise the UK’s withdrawal agreement. 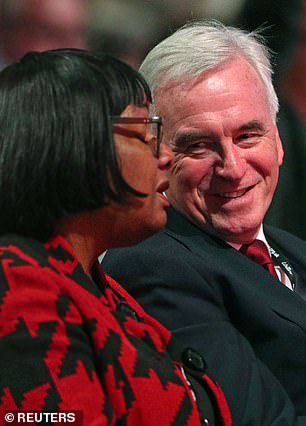 Mrs May also launched an attack on Labour, claiming the party would put its ‘hands in people’s pockets’ if it took power.

The PM is in the US as Labour holds its autumn conference in Liverpool, where shadow chancellor John McDonnell unveiled plans to create Inclusive Ownership Funds that would hand 10% of private-sector firms’ equity to employees.

He said the move would give staff annual dividends of up to £500.

‘One of the things that we’ve done of course is looked at the whole question of corporate governance and it can be done in various forms but there is that concept of workers’ representation at the board level in companies.

‘But just look at what John McDonnell’s proposal would be. In effect it would be both a tax on companies and potentially a tax on people because what he’s saying is if this is given to people he’ll cap the amount that people can actually take out of it and the rest of it will go to the state.