Who needs international travel when you can take a beautiful walk on one of the many incredible beaches, such as Camusdarach Beach, Rhu Point or the Silver Sands of Morar with their azure and aquamarine seas and immaculate white dunes that have seduced filmmakers for years, argues the #MyRoadtotheIsles campaign.

It adds: ‘With a variety of beaches to rival the Caribbean, all you must do is decide which one. You can stroll across the beach, leave only footprints in the sand and take away amazing memories, captivated by the majestic Island backdrops.’

Stunning Camusdarach Beach, one of many in Scotland that tourism bosses say rival the Caribbean

Traigh and try again – to get a hole in one

‘Play a game of golf with breathtaking scenery at Traigh Golf Course,’ says the campaign, ‘a course steeped in history, with avid golfers playing at Traigh’s nine-hole course since the 1900’s.

‘It is the most westerly course on the UK mainland, and presents the golfer with all the traditional challenges of a classic seaside links that would rival any course in the Algarve. Located seven miles from Mallaig, Traigh (pronounced “try”) means “beach” in Gaelic and is located in the most beautiful location imaginable.’

Mesmerising islands – and the most remote spot in mainland Britain 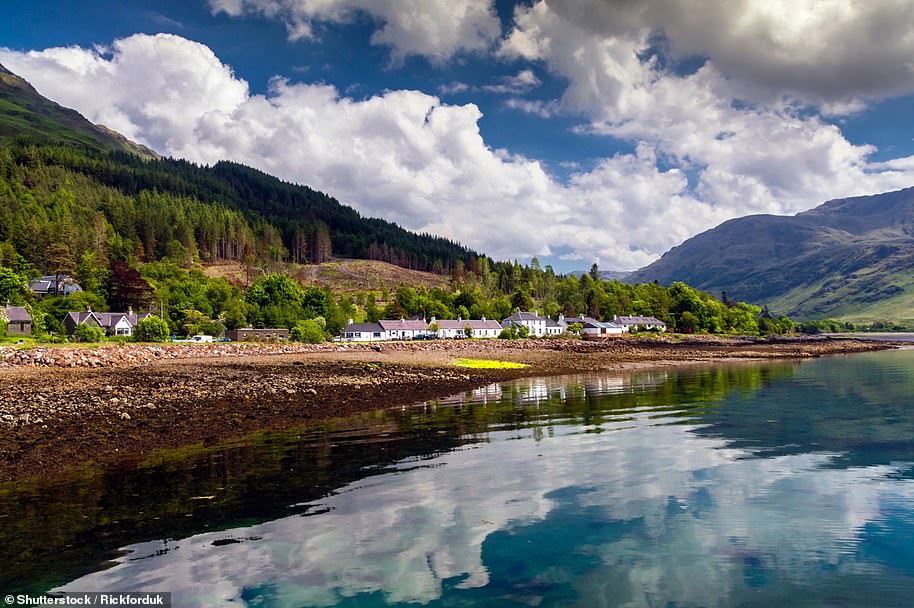 Knoydart, a community-owned peninsula described as the most remote spot in mainland Britain

Beyond the Harry Potter bridge lie the Small Isles (Rum, Eigg, Muck and Canna), the Isle of Skye and the Hebrides – ‘the Maldives, but in Scotland’.

There’s also Knoydart, a community-owned peninsula described as the most remote spot in mainland Britain.

The campaign says: ‘Hop aboard one of the incredible charter services from either Mallaig or Arisaig and explore. Daytrips with a picnic or an island adventure awaits.’

The Glenfinnan Viaduct is a must-see. This iconic ‘Harry Potter bridge’ was the first structure in Britain to be built with mass concrete, in the 1890s. The campaign points out that there’s also the Glenfinnan Monument, which marks the spot where Bonnie Prince Charlie first rallied the clans to his cause in 1745, the start of his ill-fated campaign to reclaim the throne.

It adds: ‘For culture vultures, the area is steeped in history and the celebration of the area’s heritage, wildlife and culture can be experienced in every unique location. Crofting, covert war opps, myths of buried treasure, churches and ruined monasteries, vitrified forts, traditional working fishing ports, music and culture are in abundance on the Road to the Isles.’

Some of the freshest seafood in the world

‘Incredible langoustines, mouth-watering mussels, hand-dived scallops, multi-award-winning smoked kippers and incredible artisan baking washed down with a locally brewed ale, gin or rum – no it is not the Greek islands, it is just some of the freshly landed seafood on offer from the clear pure waters around the beautiful Road to the Isles coastline,’ says the tourism campaign. ‘Dining out is part of the experience and all the restaurants offer impeccable quality, from the cosy inns to fine dining or takeaway fish and chips.’