Theresa May accused of wasting £230m in Parliament delay

Theresa May has been accused of wasting up to £230million of taxpayer money by putting off the refurbishment of the Houses of Parliament.

The Prime Minister is trying to delay the £4billion refit of Parliament, which was supposed to begin in 2022, until after a general election that year.

Meanwhile, nearby Richmond House, which was supposed to be used as temporary accommodation, has been empty since hundreds of civil servants were shifted to make way for MPs.

The Department of Health and Social Care was moved to a building half a mile away, which costs the public purse £6million a year in rent, according to The Times.

If the Prime Minister gets her way, MPs may not complete their move into Richmond House until 2030, adding another £100million to Parliament’s maintenance bill, once the cost of work to prevent fires, leaks or flooding is taken into account.

The original plans were thrown into doubt ten days ago when Downing Street and the whips decided to delay the decision until after the 2022 election.

Even though the delay could cost hundreds of millions of pounds extra, Downing Street argues the public would be against splurging £4billion on refurbishing Parliament. 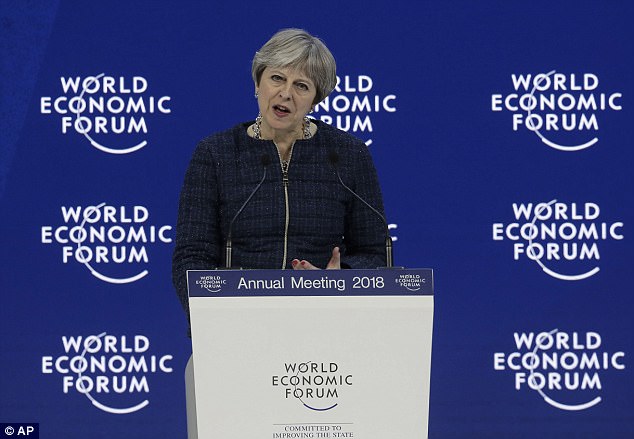 Mrs May, pictured speaking in Davos at the World Economic Forum this week, has sanctioned repeated delays to a vote on the Parliamentary refurbishment since entering office

MPs are set to vote on the issue next week, and one option could see work begin in 2027.

Mrs May will miss the vote as she will be in China.

A vote on the refurbishment was supposed to take place shortly after Mrs May became Prime Minister in 2016 but she gave the green light to repeated delays.

She has already been accused of wasting the taxpayer’s money and an analysis by the Times claimed the delay had already cost cost £230 million.