Theresa May believes she can resolve EU trade impasse

Theresa May is planning to turn to Angela Merkel and Emmanuel Macron to resolve the Brexit divorce bill dispute.

Amid increasing anger over the EU’s handling of negotiations, the Prime Minister believes she can broker a deal over the payment by going directly to the bloc’s leaders.

Tension increased yesterday when European Commission president Jean-Claude Juncker said it was ‘crystal clear’ trade talks could not begin until the UK caves in and pays the £74billion exit settlement the EU is said to want.

Theresa May is convinced she can split the EU’s negotiating team by appealing directly to leaders such as Angela Merkel, left, and Emmanuel Macron, right 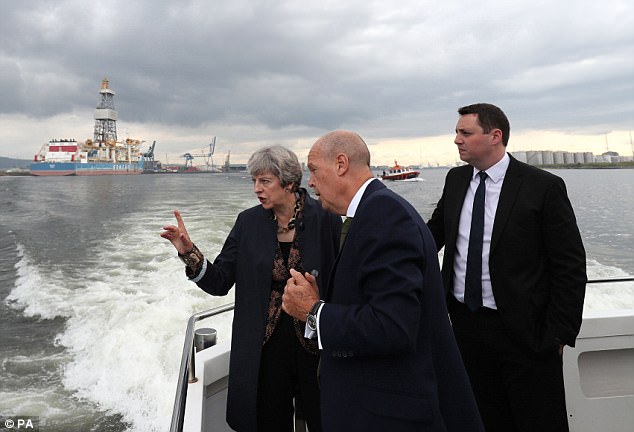 Mrs May, pictured left, does not believe Britain should have to wait any longer before opening talks about the country’s future relationship with the European Union

In a move that infuriated British officials after the hostile start to the latest round of talks, he also called Mr May’s approach to Brexit ‘unsatisfactory’.

His attempt at muscling in was immediately criticised by British officials who said the EU’s stranglehold on the timetable for finding a solution may threaten a deal.While the UK has promised to pay the EU as part of a Brexit deal, officials are concerned at the bloc’s inflexibility on the issue.

Brussels has insisted it will not discuss any future trade deal until the EU’s chief negotiator Michel Barnier judges ‘sufficient progress’ has been made in talks on the bill, citizens’ rights and Northern Ireland. While talks on the future relationship were expected to be given the go-ahead in October, EU officials have escalated threats to force a delay until the UK offers a stronger financial commitment.

Downing Street yesterday said the Prime Minister could ask EU leaders to overrule Mr Barnier and order that work begins on a trade agreement sooner. The Prime Minister’s spokesman refused to rule out Mrs May going on a round of ‘shuttle-diplomacy’ in Europe to persuade leaders that work needs to begin on a trade deal.

He said: ‘We believe the EU needs to show more imagination and flexibility when it comes to these discussions.

The EU’S chief Brexit negotiator Michel Barnier is earning up to almost £220,000 a year to oversee the UK’s split from the bloc.

The huge salary, partly-funded by British taxpayers, could see him earn around £76,000 more than his opposite number, Brexit Secretary David Davis.

Figures revealed yesterday that Mr Barnier, 66, is entitled to one of the highest categories of pay under EU rules after he was installed as a European Commission ‘director general’.

Mr Barnier, who will oversee the talks until 2019, is also entitled to a range of benefits and tax breaks offered to eurocrats.

Insiders have claimed that since being appointed to the job, the French former minister has often struggled to fill his schedule during negotiations. Revelations over his pay will add to criticism of the salaries and perks of the EU’s most senior officials.

‘Our desire is to discuss both [trade and divorce issues such as the bill] at the same time, we have repeatedly said that and that is what we are working towards.’

British officials also believe Brussels will be forced into a climbdown as EU leaders face a backlash from European businesses if they stall trade talks.

Insiders said it is ‘highly likely’ a compromise will be thrashed out by Mrs May with the EU’s most influential leaders.

Speaking to EU ambassadors in Brussels yesterday Mr Juncker said: ‘There are still an enormous number of issues that need to be settled. We need to be crystal clear that there will be no negotiations, particularly on trade between the UK and the EU, before all these issues, that is to say those under Article 50, are resolved.’

Mr Juncker said Mrs May’s refusal to give a clear figure over how much she is prepared to pay is a clear sign the ‘UK government is hesitating to show all its cards’.

He also criticised a raft of recent papers published by the UK setting out its position on key Brexit issues by saying: ‘None of those is actually satisfactory.’

He added: ‘There are a huge number of questions that need to be answered.’

Following claims by EU officials that Britain is using the Northern Ireland border as a ‘bargaining chip’, Mr Juncker said the UK has refused to provide a ‘definitive response’ to the matter.

Recent reports suggest a realistic ‘exit fee’ could be around £36billion, but 72 per cent of those surveyed rejected that amount.

Even a £20billion payment would be unacceptable to two thirds of voters, the poll suggests.

Only 18 per cent of voters would find that amount agreeable, according to the ICM poll of 1,972 adults for The Guardian.