Theresa May will in her party speech today call for ‘decent, moderate, patriotic’ Britons to unite behind the Tories to keep ‘appalling’ Jeremy Corbyn out of power.

In one of the most important speeches of her career, the Prime Minister will seek to rally her fractious party behind her by declaring that Britain’s post-Brexit future is ‘full of promise’.

The Prime Minister will also make a direct appeal to mainstream Labour voters disillusioned by Jeremy Corbyn’s left-wing agenda to switch to the Tories.

Theresa May (pictured reading her speech) will today call for ‘decent, moderate, patriotic’ Britons to unite behind the Tories to keep ‘appalling’ Jeremy Corbyn out of power 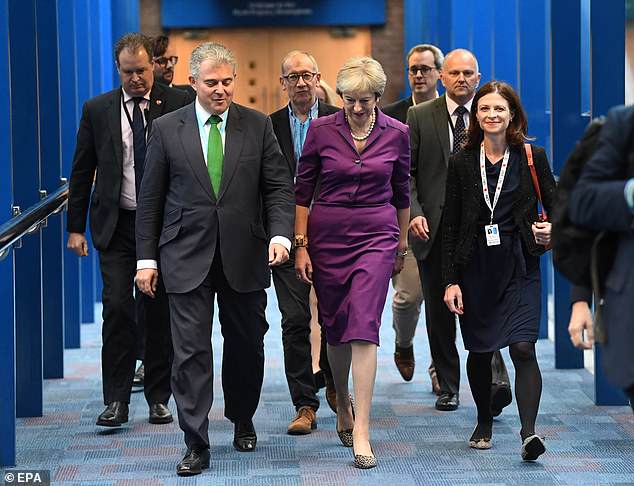 In one of the most important speeches of her career, the Prime Minister will seek to rally her fractious party behind her

And she will alter the Labour leader’s ‘For the many, not the few’ slogan as she declares that the Conservatives are ‘a party not for the few, not even for the many, but for everyone who is willing to work hard and do their best’.

The Prime Minister will say: ‘Millions of people who have never supported our party in the past are appalled by what Jeremy Corbyn has done to Labour.

‘They want to support a party that is decent, moderate and patriotic. One that puts the national interest first. Delivers on the issues they care about. And is comfortable with modern Britain in all its diversity.

‘We must show everyone in this country that we are that party. 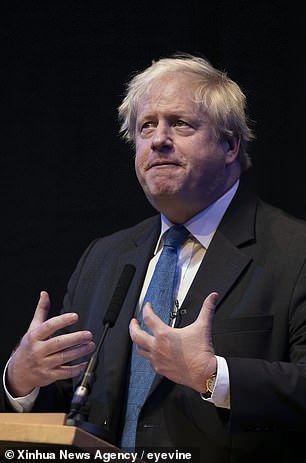 ‘Above all a party of Unionism, not just of four proud nations, but of all our people.

‘A party not for the few, not even for the many, but for everyone who is willing to work hard and do their best.’

Mrs May takes to the stage at the Conservative Conference in Birmingham less than 24 hours after 1,500 delegates gave a thunderous standing ovation to Boris Johnson as he branded her Brexit plans a ‘constitutional outrage’ that would humiliate Britain.

Mr Johnson’s demand for the PM to ‘chuck Chequers’ has echoed around the corridors and fringe meetings at a gathering riven by profound differences over the best approach to Britain’s EU withdrawal.

But he stopped well short of a direct challenge to her leadership, urging Tories to ‘back (her) in the best way possible’, by encouraging her to ditch the plan agreed at her country residence and return to her earlier hard Brexit blueprint.

Mrs May said she was ‘cross’ with her former foreign secretary, accusing him of being ready to ‘tear up’ her guarantee to the people of Northern Ireland that there would be no customs border down the Irish Sea.

But in her keynote speech in Birmingham, she will focus on her hopes for a brighter future after Brexit.

‘I passionately believe that our best days lie ahead of us and that our future is full of promise,’ she will say.

‘Don’t let anyone tell you we don’t have what it takes: we have everything we need to succeed.’ 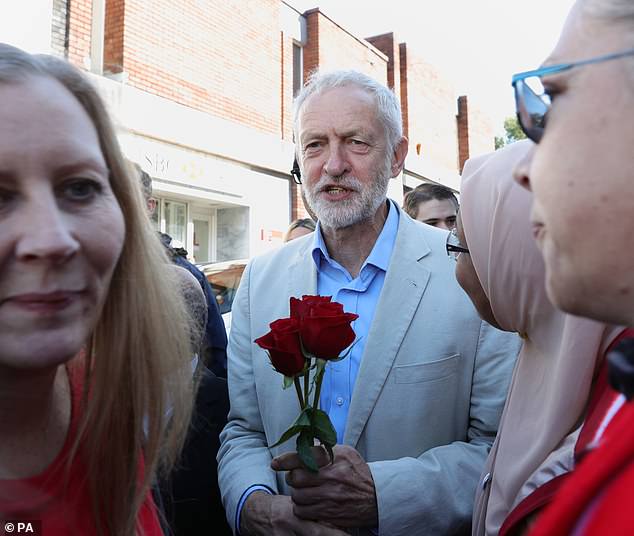 Labour leader Jeremy Corbyn arrives to deliver a speech on Labour’s plan to ‘rebuild Britain for the many, not the few’ in Halesowen in the Midlands on Sunday

The crucial address comes one year, almost to the day, since her catastrophic conference speech in Manchester, where she suffered stage invasion by a comedian, a persistent cough and a collapsing backdrop.

Observers will keep a close eye on whether she makes any reference to that calamitous performance, which led to speculation over how long she could last as Conservative leader.

She has already said she has taken steps to ensure she speaks ‘strongly’ this time round.

In a speech entitled Our Future Is In Our Hands, Mrs May will tell delegates that countries across the world stand ready to trade with the UK.

And she will promise that at this ‘moment of opportunity’ the Conservatives will always act in the ‘national interest’ and put the needs of hard-working people first.