Theresa May greeted Vladimir Putin with a frosty handshake at the start of their meeting in Japan as she was expected to confront the Russian president over the Salisbury spy attack and demand he hand over the two agents who are believed to have carried out the poisonings.

The outgoing Prime Minister, who is set to resign in less than a month’s time, was due to use what is likely to be her last major appearance on the world stage to go toe-to-toe with the Russian President.

Mrs May was expected to demand that those responsible for the Wiltshire chemical attack be ‘brought to justice’ but her request will almost certainly be rebuffed by Mr Putin as an attempt to thaw relations between Russia and Britain appeared to be doomed from the start.

The showdown at the G20 in Osaka was the first face-to-face meeting between the two leaders in nearly three years – amid signs the Kremlin wants to end its isolation after repeated fallings out with the West. 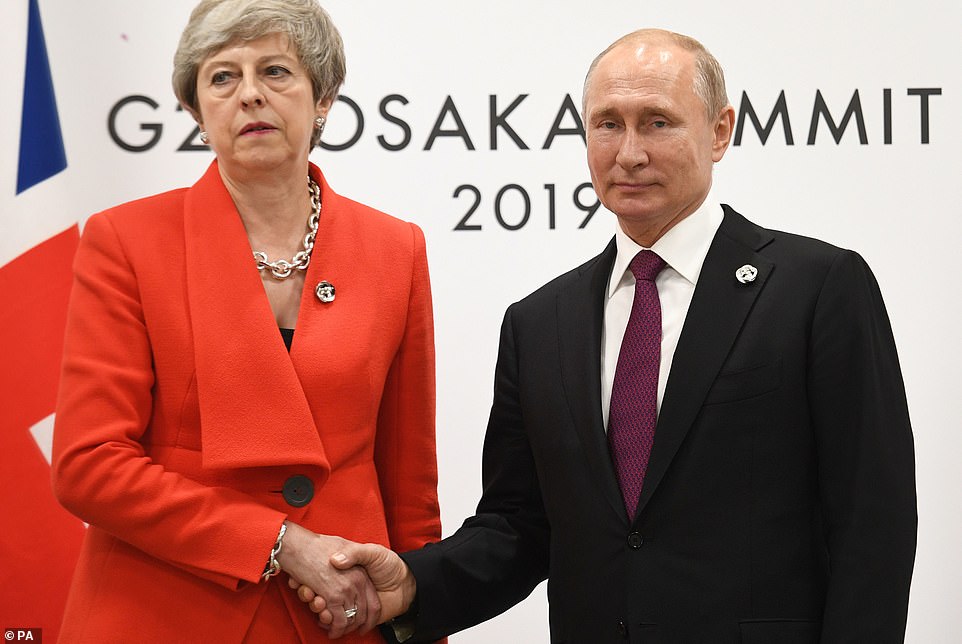 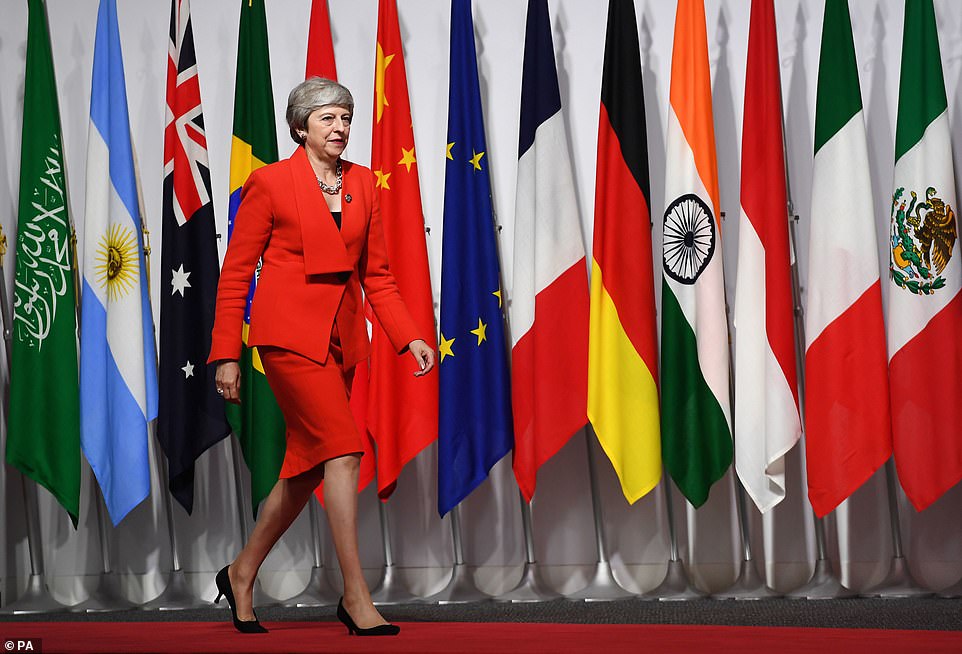 The Prime Minister, pictured today arriving for the welcoming session at the G20 summit in Japan, will formally resign on July 24 when her successor will be asked to form a new government

Relations were put in the deep freeze following the attempted assassination of Sergei and Yulia Skripal last year with the nerve agent Novichok which left one innocent Briton dead.

Britain, along with 20 of its international allies, expelled more than 150 Russian diplomats as relations sunk to a new low. Russia has always denied any involvement in the Salisbury attack.

Downing Street has repeatedly insisted that today’s meeting did not represent a ‘normalisation’ of relations between the two countries.

She said last night the UK’s position towards Russia ‘has not changed’ but she did open the door to a ‘different relationship’ between Britain and Russia if Mr Putin changes his ways.

Mr Putin’s expected refusal to hand over the Novichok suspects means any chance of a thawing in relations appears slim.

Asked about the prospect of extraditing Alexander Petrov and Ruslan Boshirov, who have both been accused of attempted murder over the Salibsury attack, she told reporters on the way to Osaka: ‘We believe we have identified the evidence and identified two individuals, we believe they should be brought to justice.

‘There are European arrest warrants out for these individuals and if they step foot outside Russia, we will be making every effort to ensure they are brought to justice.’

The chances of the meeting ending in success appeared to be slim from the outset after Mr Putin told the Financial Times in a rare interview: ‘Treason is the gravest crime possible and traitors must be punished.

‘I am not saying that the Salisbury incident is the way to do it. But traitors must be punished.’ 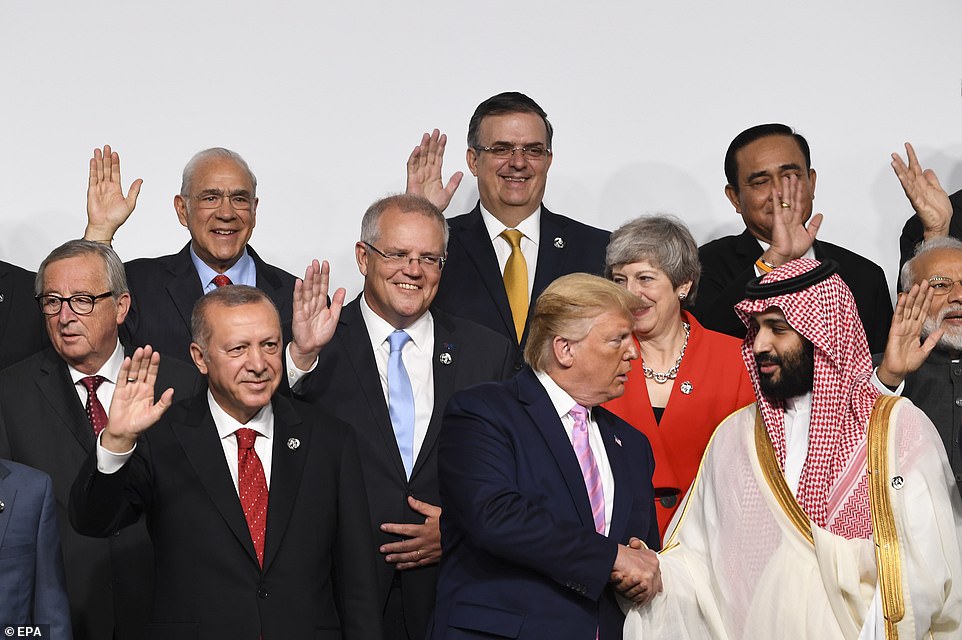 Despite being on the other side of the world, Mrs May was still dragged into the race to succeed her as she was grilled by reporters about comments made by Boris Johnson 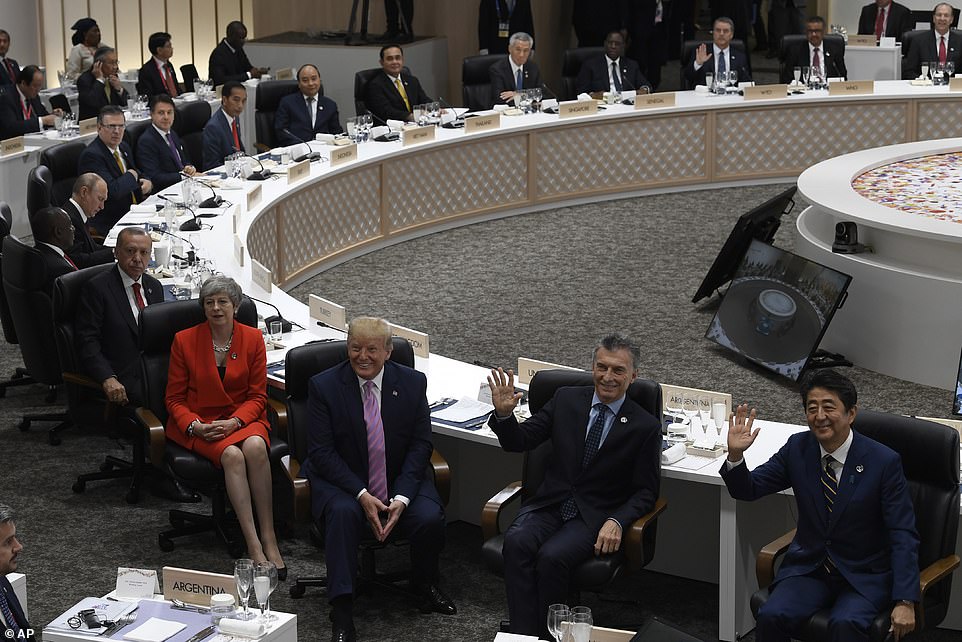 Mrs May, pictured today alongside Donald Trump, confronted Vladimir Putin during a bilateral meeting but she has also sought to lead the way at the G20 summit on the need to tackle climate change

Mrs May has sought to leave a lasting impression on the world stage during her trip to Japan as she prepares to leave Downing Street next month to make way for her successor.

As well as the combative meeting with Mr Putin, the PM has also tried to make big interventions on the need to tackle climate change and international terrorism.

She said walking holidays in the Swiss Alps had convinced her of the need to combat global warming.

She and husband Philip, who has accompanied her on the trip to Japan, had witnessed the Gorner Glacier retreating ‘quickly’ over the past decade and it prompted her to act.

Mrs May is expected to press other leading nations at the G20 summit to match the UK’s cuts to emissions.

However, despite being on the otherside of the world, Mrs May has been unable to escape the battle to succeed her.

Today she refused to be drawn on whether she was aware of a remark made by Boris Johnson when he was foreign secretary.

Mr Johnson, the favourite in the race to be the next PM, described the French as ‘turds’ over Brexit in a BBC documentary.

The remark was removed by the BBC after pressure from the Foreign Office amid fears it would damage diplomatic relations and harm the UK’s chances of getting a good Brexit deal.

Mrs May would not be drawn on whether she knew about the remark which had been due to be broadcast last November.

She told ITV: ‘I believe that whoever succeeds me as leader is going to be working with the European Union and with our Parliament to find a way through this to ensure that we can do what we wish to do, which is deliver on the vote of the British people.’

Pushed again on whether she was aware of the comment having been made at the time, she said: ‘What I believe whoever takes over will be doing is ensuring that they can work with the EU and with our Parliament to find a way through.’