Theresa May ended the year by thrashing Corbyn at PMQs

Theresa May ended a generally iffy year by giving Jeremy Corbyn a cheerful spanking at PMQs. She threw off her glumbucket persona and got stuck in to the old boy.

Thrashed him like a dusty carpet. Gents in Mayfair pay good money for that sort of thing. I am told.

‘Y’know,’ she said, all conversational as she danced away from the despatch box and held her ballpoint pen with the fingers of two hands, ‘not that long ago he was saying he was going to be prime minister by Christmas.’

Pause for uproar and hilarity from the Tory benches. ‘He was wrong. I am! And the Conservatives are in Government.’ More ballyhoo. Mr Corbyn bit on his front tooth.

Mrs May pushed her tongue into her cheek, leaned an elbow on the box and continued: ‘Not that long ago he said we wouldn’t deliver on phase one of the Brexit negotiations. Well he was wrong!’

She said this ‘he was wrong’ riff with a throw of the shoulders. I’ve seen similar during renditions of ‘Siddown You’re Rocking the Boat’ in the musical Guys and Dolls.

She was not yet finished. ‘And not that long ago he predicted that the Budget would be a failure.

In fact the Budget was a success and it is delivering more money for our NHS. Labour: wrong, wrong wrong!’ We all braced ourselves for ‘Conservatives: right, right, right’ but she avoided that, probably sensibly – it might have sounded a bit Nuremberg.

And so she settled for ‘Conservatives: in Government, delivering Brexit and a Budget for homes and the health service, Conservatives delivering a Britain fit for the future!’ Being Mrs May, it was spoken with several vocal checks, neck spasms and quite a lot of blinking but she managed to cough it out all the same and it sent her backbenches into orbit. 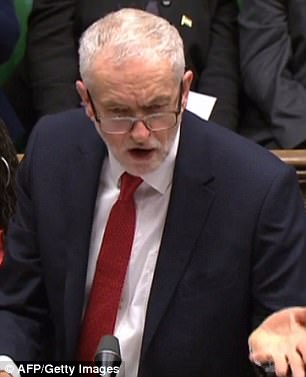 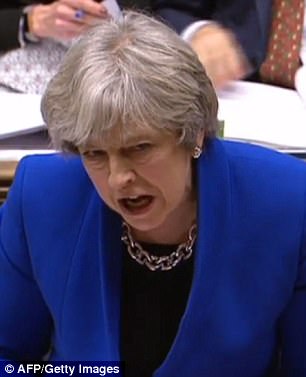 May taunted Corbyn  and applauded the Conservative party, saying how she believes that the budget was a success and is delivering more money for our NHS

Even Antoinette Sandbach (Con, Eddisbury), one of the infamous ‘mutineers’, managed to wave her Order Paper. Taxi for Sandbach?

That was the highlight of another self-indulgently over-long PMQs.

Speaker John Bercow seems determined to wring the life out of this weekly session. Yesterday it lasted for more than 50 minutes (it is meant to be half an hour) and was so long that the MPs were streaming out of the Chamber long before the finish.

John Baron (Con, Basildon & Billericay) had left his seat and was heading for an early lunch when the Speaker invited him to ask a question. There was a moment of Benny Hillish comedy as Mr Baron screeched on the brakes and stepped backwards to return to his seat in order to put his question to Mrs May.

The Commons stereotype is of blokes being the boors but it is often the women who are the most acid. Two sat just behind Mr Corbyn in identical red and black outfits. One was the new MP for Battersea but the other was from Lord knows where. Small fry. 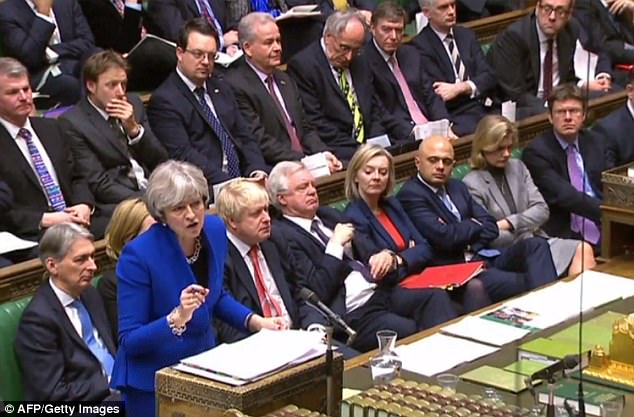 May said that the Conservatives in government are delivering Brexit and a Budget for homes and the health service, and are delivering a Britain fit for the future

These two heckled almost every Tory who spoke. Even Bercow tired of it and told them to cork their incessant ‘wittering’. Sharper to the Speaker’s left sat a grey-trousered blob from west Yorkshire.

When discussion turned to the NHS, she chose a moment of calm to shriek at Theresa May ‘shame on you!’ Another sister in that part of the House interrupted a May sentence to honk that the NHS was in ‘chaos’. This only set off return fire from Anna Soubry (Con, Broxtowe) who bellowed ‘shame!’ at the socialists. Is that the same Soubry who has this week been bleating about the Press not being respectful enough of MPs? It is!

Among the Opposition’s number sat Liz McInnes (Lab, Heywood and Middleton) and Rachael Maskell (Lab, York C). For much of the session those two gossiped with each other and pointed at Tory MPs, cackling and mocking, groaning when Tory stooges came out with sycophancy, snorting with derision when others made different points. When I last looked, Ms McInnes was 58 years old.