Theresa May flies into Berlin for talks with Angela Merkel

Angela Merkel today insisted she ‘deplored’ Brexit and warned the German position had not softened in the months since the referendum.

The Chancellor warned the Brexit negotiations were now under ‘time pressure’ as she warned agreements had to be put in place to keep planes flying and allow cross border healthcare to continue.

And Mrs Merkel said Germany has not changed its position on Britain leaving the EU, saying: ‘We deplore it.’

At the pair’s joint press conference in Berlin, Mrs May repeated her hopes for a ‘bold and ambitious’ partnership with the EU after Brexit.

But the Prime Minister was forced to rebuff claims Britain was not being clear about what it wanted from the negotiations.

Mrs Merkel insisted she still did not know what Britain wanted to achieve in Brexit talks and quipped: ‘I’m not frustrated, I’m just curious how Britain envisages this future partnership and obviously we also have our own vested interests.’ 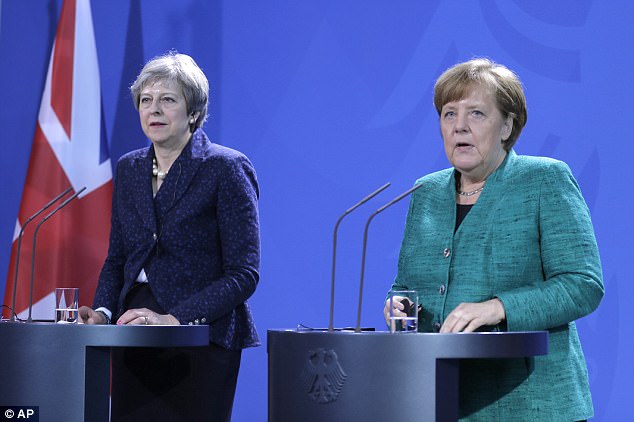 At a joint press conference in Berlin, Mrs May repeated her hopes for a ‘bold and ambitious’ partnership with the EU after Brexit 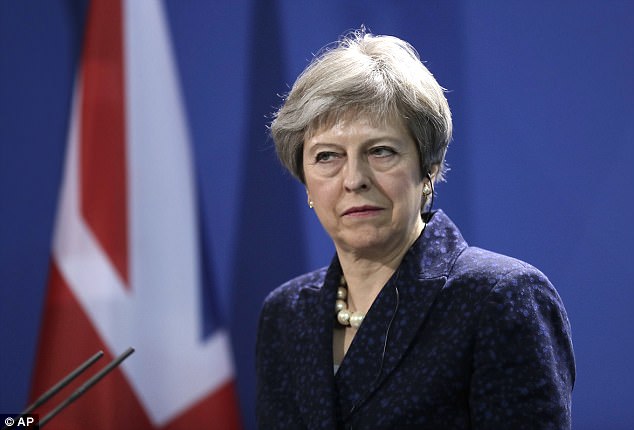 In response, Mrs May told the press conference: ‘It is not just a one way street… our future economic partnership is good for the UK and the EU.

Mrs Merkel said Germany has not changed its position on Britain leaving the EU, saying: ‘We deplore it.’

She said that she now wanted to hear from the British on their proposals for a Brexit deal.

‘We very much look forward to Britain again setting out its ideas,’ she said.

‘We would like to initiate those negotiations because we are under a certain amount of time pressure but we also want be very diligent and very careful in working on this which means we will have frequent exchanges of views.’

March 2018: Transition deal due to be agreed, running for about two years

October 2018: Political agreement on the future partnership due to be agreed

The Chancellor added: ‘We would like to preserve this close partnership.

‘Both sides, in a way, are in a process of learning and trying to figure out where we find common ground.

‘For this what we need is a permanent exchange, because sometime we don’t know how our opposite is seeing things.’

Mrs Merkel said there were still many issues to resolve. She said: ‘We have to be very careful we have the right rules and regulations in place for example to be able to enable tourists to meet, that planes can start, that we have proper healthcare systems in place – all of that has to be settled

‘And the we have to think if trade relations and service relations…all of that will come out in the course of negations.

‘There is not this one crux of the matter this one single bone of contention it is a complex structure of negotiations and we have to come to a fair balance for both sides.’ 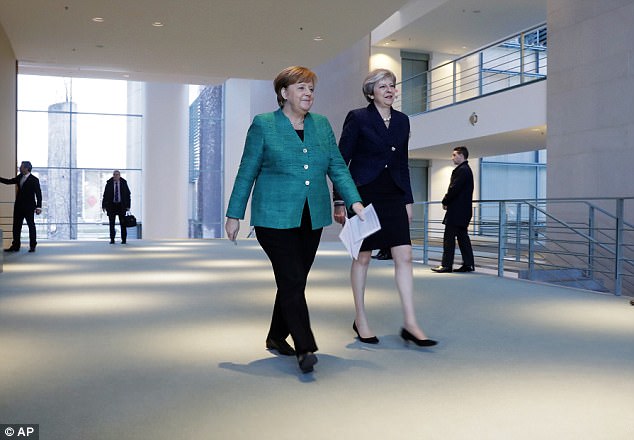 The German chancellor hosted Prime Minister Theresa May for talks on Brexit and European security. Mrs May is travelling to Munich later to make a security speech tomorrow

In response, Mrs May told the press conference: ‘It is not just a one way street… our future economic partnership is good for the UK and the EU.

‘I believe through negotiations we can achieve that economic relationship.’

Asked if it was time for Britain to make a clear offer and not wait on Europe, Mrs May said: ‘The point of negotiations is two partners sit down and talk about these issues and come to an agreement about these issues.’

She said she had clarified the issues at different points in the negotiation and tomorrow will flesh out what future security arrangement she wants.

She added: ‘I think that’s important because we are all facing the challenges and threats.’

‘This is not the time to reduce cooperation but to develop and extend cooperation.’

Mrs May said the next round of Brexit talks in Brussels would begin on Monday.

‘We have referred in our discussions to the UK’s vision for a bold and ambitious economic partnership once the UK leaves the European Union,’ she said.

‘I want to ensure that UK companies have the maximum freedom to trade and to operate in German markets and for German businesses to do the same in the UK.’ 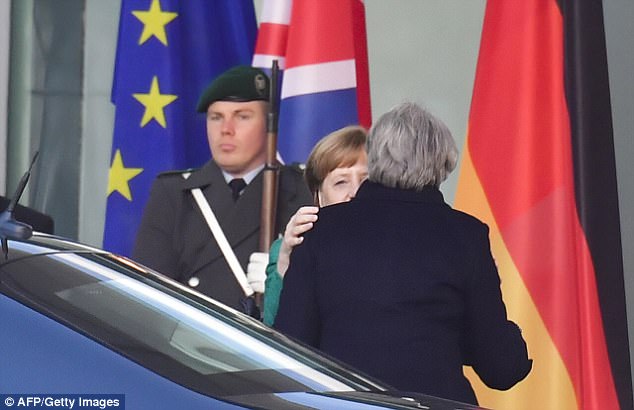 Mrs Merkel reportedly entertained a private meeting by joking that every time she asked her want she wanted, the Prime Minister replied: ‘Make me an offer.’

Ahead of today’s talks, former Nato secretary general Anders Fogh Rasmussen called for greater urgency in agreeing the post-Brexit security relationship between the UK and EU.

‘I am concerned that as far as we can see, security is not on the radar screen right now.

The former Danish prime minister said negotiations on a UK/EU security treaty should begin ‘right away’.

He added: ‘Even the UK must realise that in today’s world, its strength is very much dependent on co-operation with other countries.’

In order to continue data-sharing with the EU in the realm of security, the UK would have to continue to observe Brussels regulations, he warned. 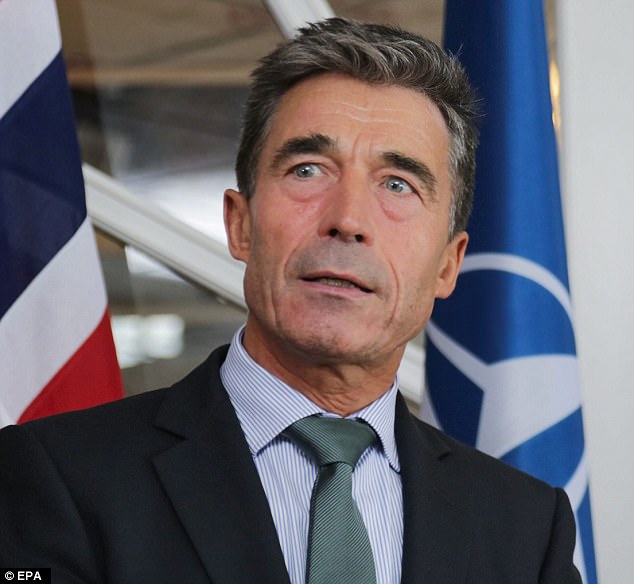 The former director of the Government’s GCHQ eavesdropping centre, Robert Hannigan, told BBC Radio 4’s Today programme that Mrs May should use her Munich speech to ‘give some detail and set out a plan’.

He warned that she will ‘disappoint’ her European audience if she simply restates her wish for a special security partership.

‘People now – as in every area of Brexit – want to hear some detail about what does that mean and on the really difficult issues what is the plan that is going to be put to Brussels,’ he said.

He warned that Britain’s defence industry ‘is likely to start a steady decline’ if it loses the ability to collaborate on research and innovation with the increasingly integrated EU defence sector.

‘Increasingly, our defence sector – which is incredibly important to us, hundreds of thousands of jobs right across the UK depend on that sector – has been collaborating with European partners, particularly on research and innovation, which is no longer really affordable for a medium-sized country,’ said Mr Hannigan.

‘To compete in the modern market and export outside of the EU – where most of our defence exports go – we need to collaborate. Will that be possible in the future?’