Theresa May has already made a MILLION on the public speaking circuit but won’t earn as much as her male peers – including Boris Johnson -because men are better at ‘chasing the dollar’, says expert

Theresa May may have already earned a cool million in public speaking engagements since resigning from number 10 in May 2019 – but she’s still unlikely to rake in as much as her male peers, according to one expert.

The former PM, who said she’d like to spend more time on hobbies such as walking and cooking after she departed Number 10, has been focusing instead on a rather more lucrative venture – entertaining well-heeled guests at big-ticket speaking events around the globe.

Eight engagements in a year have already brought in a million pounds for Mrs May, which works out at over £100,000 per gig, as she recounts stories from her three years as the British Prime Minister.

Former Prime Minister Theresa May was paid roughly £150,000 a year to run the country, but has made nearly five times that in the 12 months since leaving office thanks to the lucrative public speaking circuit

However, in a debate on Radio 4’s Woman’s Hour, Professor Heather Mcgregor, from Edinburgh Business School, said that women still fall short when it comes to earning power on the global circuit, which attracts high-powered business people and former government members with big sums.

She told the show’s host Jane Garvey: ‘She’s made over a million – that’s about ten to a dozen appearances that she’s done for that massive fee – it’s not that she’s going out five times a week.’

Professor Mcgregor added: ‘However much money Theresa makes, she is going to be a rounding error compared to the amount of money that the men in this game make.

‘Men seem to be much more single-minded about this and ‘chase the dollar'”. 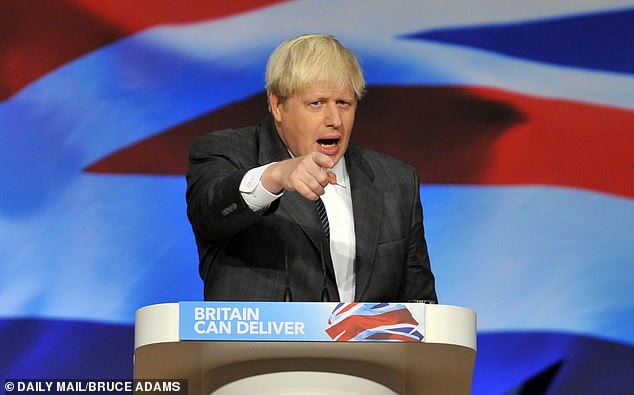 While Theresa May only joined the global circuit last year, Boris Johnson has long been a ‘prolific’ public speaker – regularly appearing at functions in a speaking capacity while London Mayor

Calling Boris Johnson’s public speaking record ‘prolific’, Professor McGregor said the current PM would ‘speak at the opening of an envelope’ prior to being Prime Minister and frequently spoke at events while the Mayor of London.

She also said that the same disparities that exist between the sexes in the boardroom when it comes to salary are ‘replicated on the speaker circuit’.

Public speaking expert Viv Groksop, also appearing on the Radio 4 show, told the programme that it’s rare insight that makes people a hit on the circuit, saying: ‘It’s not so much about how good a public speaker you are, it’s about how much people want to get you ‘off the record’.

She said: ‘You only really get those massive fees if you are in very high demand but low supply.’