Theresa May lays down gauntlet to Tory Brexiteers and Remainers

Theresa May is laying down the gauntlet to Tory Eurosceptics and Remainers as she fights to find a way through the Brexit standoff.

The Prime Minister is set to face down rebel MPs who want to stay in the EU customs union permanently.

But in return she will demand that Brexiteers swallow an extension in ties until 2023.

The high-stakes move emerged as the Times reported that the government will bring the crucial EU Withdrawal Bill back to the Commons within weeks – paving the way for a potentially decisive showdown.

Downing Street insisted today there would only be a single transition period that ends in December 2020.

In other developments, Labour leader Jeremy Corbyn claimed today there was a majority in the Commons to keep Britain in a customs union with the EU.

Mrs May has been scrambling to hold her party together amid increasingly bitter infighting over Brexit.

The Cabinet has been split on whether to back a ‘Maximum Facilitation’ customs scheme, favoured by Boris Johnson among others, which would rely on technology and trusted trader schemes to keep borders fluid.

Other ministers, including Mrs May, have been urging a ‘customs partnership’ that would see Britain collect duties on behalf of the EU and then offer businesses a rebate.

Jeremy Corbyn claimed today there is a majority in the Commons for his plan of keeping a customs union with the EU after Brexit.

The Labour leader insisted the Brexiteer vision was a ‘pipe dream’.

Speaking in Belfast he said: ‘Labour will not support any Brexit deal that includes the return of a hard border to this island. But we are also clear there must be no border created in the Irish Sea either.

‘That is why Labour has put forward a plan that would go a long way to solving this issue, a plan for which I believe there is a majority in Westminster.’

However, at least a dozen Tory backbenchers are thought to be ready to join Labour in demanding the UK stays in a full customs union – enough to overturn Mrs May’s wafer-thin Commons majority.

They say keeping close ties is the only way to prevent harm to the economy and avoid a hard Irish border.

Brussels has dismissed both the government’s options as ‘magical thinking’ – although Irish PM Leo Varadkar has hinted that a partnership could be made to work.

The difficulties facing Mrs May were underlined yesterday when the chief executive of HM Revenue & Customs warned that the ‘Max Fac’ blueprint could take three years to implement.

Jon Thompson also told MPs the model could cost business up to £20billion.

The Cabinet Remainers’ option of a customs partnership would take even longer fully to implement at five years, he said – but the costs would be significantly lower at around £3.4billion.

The transition period currently agreed in principle with the EU will last from March next year to the end of 2020.

Downing Street said today the Government’s ‘intention’ was for the future partnership to be agreed and ready to come into effect when transition ends. 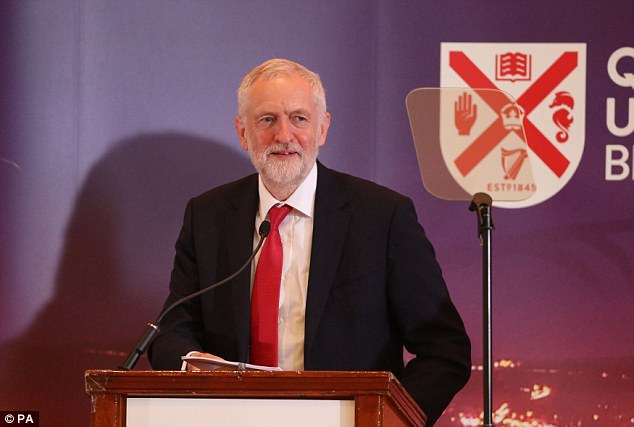 According to the Times, Mrs May is now expected to ask Brussels for an extended customs and regulatory alignment period that would stay in place from 2021 to at least 2023.

By that time technological solutions should be ready to ensure there do not need to be physical checks at the Irish border and elsewhere.

Mr Corbyn used a speech in Belfast today to claim there was a majority in the Commons for his plan to maintain a customs union with the EU after Brexit.

He said: ‘Labour will not support any Brexit deal that includes the return of a hard border to this island. But we are also clear there must be no border created in the Irish Sea either.

‘That is why Labour has put forward a plan that would go a long way to solving this issue, a plan for which I believe there is a majority in Westminster.

‘Let’s not give up years of hard fought cooperation and stability for the pipe dream prize of race-to-the-bottom free trade deals with the likes of Donald Trump.

‘Opposition to the idea of bringing back a hard border to this land isn’t just about avoiding paperwork or tariffs, important though that is, it’s about deep rooted cultural and community ties.

‘An open border is a symbol of peace, two communities living and working together after years of conflict, communities who no longer feel that their traditions are under threat.’ 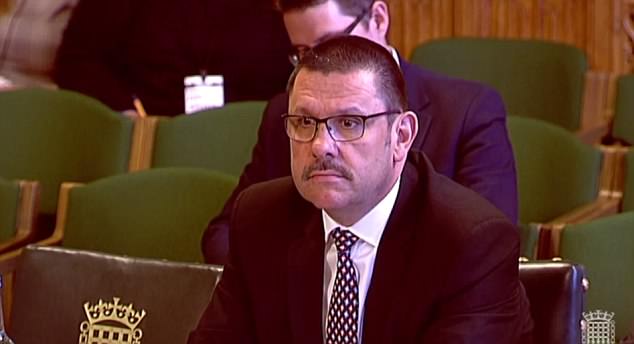 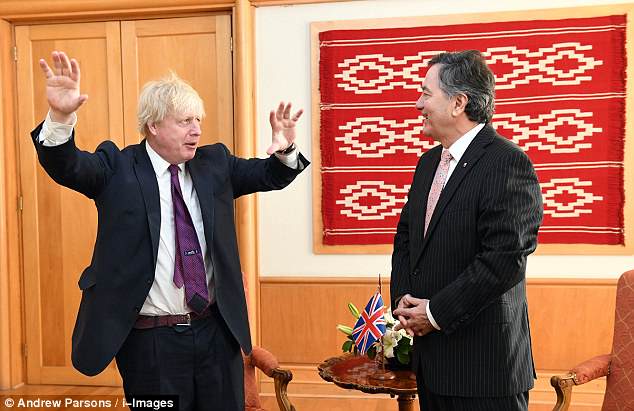 The Foreign Secretary Boris Johnson, pictured on a visit to Chile yesterday, has backed the Max Fac customs blueprint and urged Mrs May to ‘get on with’ leaving the EU

Amid continued uncertainty about the Government’s position in Parliament on Brexit issues, Commons Leader Andrea Leadsom today announced new business for MPs that makes no mention of leaving the EU.

Reports had suggested the EU Withdrawal Bill could return to MPs after the Whitsun recess as ministers try to strip 15 defeats inflicted by peers off the laws.

But there was no sign of the crucial legislation when she made her weekly business statement.