Theresa May has hailed the work of the Armed Forces from Salisbury to Syria in her Christmas message to UK servicemen and women.

Mrs May highlighted the work done after the Russian Novichok attack in Wiltshire as well as those serving further afield in her end-of-year message to those who will not be at home with their loved ones.

She said UK forces had ‘continued to demonstrate why you are the finest in the world’.

‘From playing a vital role in cleaning up after a sickening nerve agent attack on the streets of Salisbury, protecting our waters and our skies from Russian intrusion and strengthening our allies in Eastern Europe, striking at terrorism as part of the Global Coalition against Daesh, and along with our US and French allies – sending a message to the Assad regime that we will not stand by while chemical weapons are used, as they were in April on families, including young children,’ she said.

‘Time and again, you have stood up to aggression and those who flout the rules-based international order.

‘You should be incredibly proud of all that you do, just as the whole country is proud of you.’

She added: ‘Now as we approach the New Year, there will be new challenges ahead.

‘But I know you will continue to meet them in the same way that you have always done. With courage, determination, resilience, ingenuity.

‘Qualities that are as vital now as they have ever been.’ 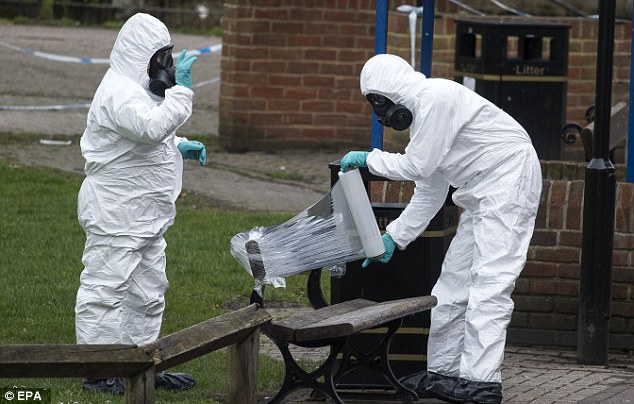 The Army was called into Salisbury in the aftermath of the assassination attempt on former spy Sergei Skripal in March.

Military personnel covered the crime scene with silver sheets and took away the bench where the Russian double agent and his daughter Yulia were taken ill.

The Skripals and Wiltshire Police officer Nick Bailey were left fighting for their lives after they were exposed to the Soviet-era nerve agent.

They survived but mother-of-three Dawn Sturgess died after she and her partner Charlie Rowley were exposed to the novichok in Salisbury months later.

In September the suspects were named as Alexander Petrov and Ruslan Boshirov, although police did not believe those were their real names.

Metropolitan Police said they would not apply for extradition as Russia’s constitution does not allow it.

The Met’s counter-terror squad took over the investigation after Skripal’s identity emerged.