Theresa May plea to make Brexit work for next generation

Theresa May arrives to speak at the UN General Assembly

Theresa May will today warn EU leaders they have a ‘profound responsibility’ to make Brexit work.

Making a ‘generous’ offer to secure a breakthrough in the deadlocked talks, she will propose a two-year transitional deal and pledge to pay up to 20 billion euros (£17.5bn) to ensure no hole is left in the EU’s budget.

The Prime Minister, who will not put a precise figure on the size of any ‘divorce bill’, will also set out how the rights of EU citizens living in the UK will be enshrined in the final Brexit treaty so British courts are directly bound by the agreement and there can be no doubt about their future.

Mrs May will tell Europe’s leaders they have a duty to future generations to strike a good deal, saying: ‘The eyes of the world are on us.’

And she will say that ‘Britain’s future is bright’ regardless of whether they agree to a trade deal, because of the UK’s ‘considerable’ economic strengths and ‘indomitable spirit’.

In a landmark speech in Florence, Mrs May will urge her EU counterparts to seize the opportunity to ‘write a new chapter in European history’ together so both sides thrive.

She will confirm Britain is to leave the EU in March 2019, but will set out plans for a ‘phased transition’ of up to two years as the new arrangements are put in place.

In a gesture that she hopes to move talks forward, Mrs May will for the first time pledge that Britain will continue to pay into the EU’s coffers during this ‘implementation phase’. 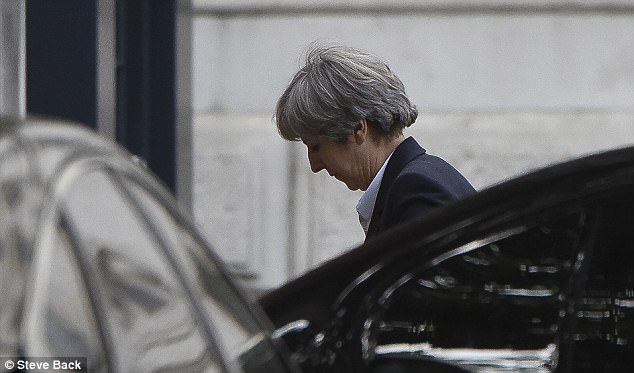 This will ensure there is no hole in the bloc’s current seven-year budget, which runs until 2020.

The Prime Minister’s offer will ensure that Eastern European member states will receive no less money from Brussels and others such as Germany will not be forced to pay more into the budget.

A precise figure will not be put on the money but it is expected that the payments would be for about £20bn over two years.

Talks in Brussels have ground to a halt over the summer as EU officials have claimed not enough progress has been made on the issues of the divorce bill, citizens’ rights and Northern Ireland for negotiations to move forward to a second phase, including trade talks.

By making substantial new offers on the key issues and striking a more conciliatory tone, Mrs May is hoping EU leaders will agree that negotiations should move forward to the next stage at a crunch summit in a few weeks. 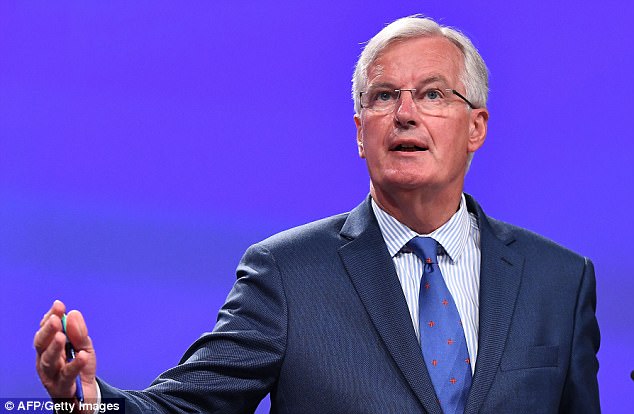 But the EU’s chief Brexit negotiator Michel Barnier last night put an immediate dampener on expectations by threatening to walk away from talks if Britain does not ‘settle the accounts’.

It was also reported last night that UK officials have told negotiators they are willing to consider European Court of Justice case law being ‘taken into account’ by British judges when they rule on disputes over the rights of EU citizens.

The Prime Minister’s speech will set out her vision for a ‘bold’ economic and security partnership with a ‘time-limited’ implementation period to avoid a cliff-edge change for businesses adjusting to the new arrangements.

But she is thought to have rejected a Swiss-style ‘European Economic Area minus’ deal, which could have involved ongoing payments to Brussels and potentially accepting the free movement of people, and will instead demand a bespoke deal. 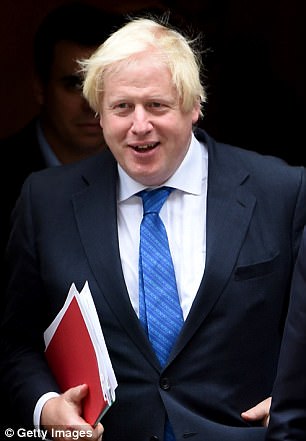 Boris Johnson declared it was ‘gonna be a great speech’

In a direct pitch to the continent’s leaders, Mrs May will emphasise the historic nature of the negotiations as she calls for an ‘imaginative and creative’ approach to securing a deal.

The Prime Minister will tell her counterparts that if a deal can be reached ‘then when this chapter of our European history is written, it will be remembered not for the differences we faced, but for the vision we showed’, and ‘not for a relationship that ended but a new partnership that began’.

She will acknowledge that Brexit is ‘inevitably a difficult process’ but it is in ‘all of our interests for our negotiations to succeed’.

The European Council has to decide next month whether sufficient progress has been made during talks so far to start negotiations on a trade deal.

Mrs May will hope that today’s offer is sufficient to end the stalemate.

The President said he had made a decision on the future of the nuclear deal with the country, but would not reveal it to fellow leaders at the United Nations.

Secretary of State Rex Tillerson said that when Mrs May asked Mr Trump what his plan was during a private 30-minute sit-down, he refused to tell her.

How May won over bullish Boris: Foreign secretary says PM’s Brexit speech is ‘gonna be great’ as he backs her promise for a ‘bright future’ outside the EU

Boris Johnson gave his seal of approval to Theresa May’s landmark Brexit address last night as she promised a ‘bright future’ for Britain outside of the EU.

The Foreign Secretary said ‘it is gonna be a great speech’ after a two-and-a-half hour Cabinet meeting designed to tie ministers to the Prime Minister’s Brexit vision.

In her speech today, Mrs May will hail Britain’s ‘exceptional national talent for creativity and an indomitable spirit’ as she insists the country will thrive away from the Brussels bloc. 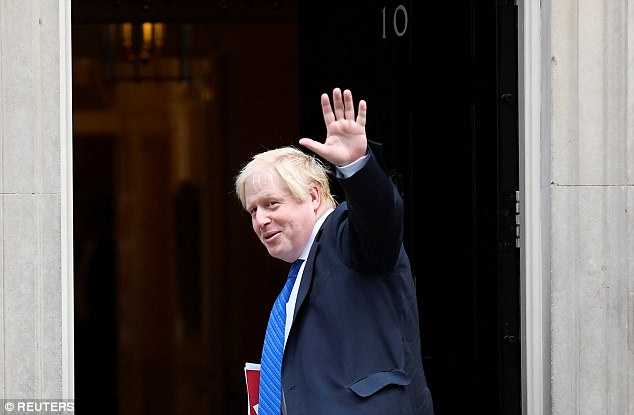 She will cite the UK’s ‘considerable’ strengths, including an ‘enthusiasm for innovation; an ease of doing business’ and some of the best universities in the world.

Her optimism appeared to have won the backing of all wings of her Cabinet, as Mr Johnson and Chancellor Philip Hammond – who have been at loggerheads all summer over Brexit – emerged from the meeting side by side.

After a reporter shouted, ‘Is he your new best friend?’, both men -–who will today flank the Prime Minister in Florence along with Brexit Secretary David Davis and Home Secretary Amber Rudd – smiled.

Mr Johnson appeared to have blown the Prime Minister’s preparations for the speech off course last week by setting out his own upbeat Brexit plan in a 4,200-word newspaper article.

It was suggested he felt compelled to offer an optimistic vision of Britain’s life outside the EU. 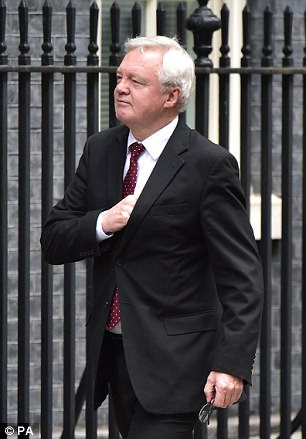 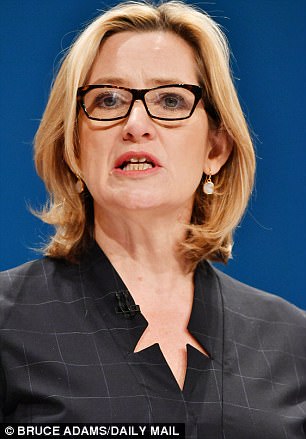 Over the course of an extraordinary few days, Mr Johnson was then forced to deny he was planning to resign if he did not get his way over his demands that Britain should stop handing big sums to Brussels.

Although he later backed away from the brink, the Foreign Secretary last night appeared to have helped force Mrs May to strike a positive tone in today’s address.

Mrs May gathered her ministers in Downing Street to brief them on the speech in a special session of the Cabinet after flying back from the UN General Assembly in New York. 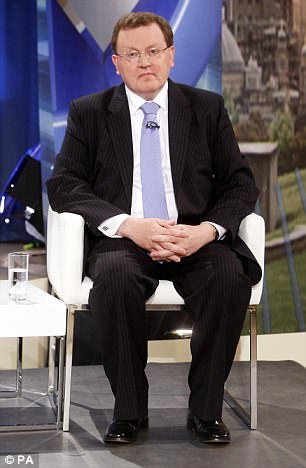 Scottish Secretary David Mundell was the only minister not to attend, as he is on a trade visit to Argentina

After they arrived at 10am, ministers were given half an hour to read Mrs May’s 5,000-word speech, before she joined them to chair the extraordinarily long meeting.

Each minister was given the chance to speak, with the whole Cabinet in attendance, except for Scottish Secretary David Mundell who was on a trade visit to Argentina.

A source said: ‘It was all very positive. Everybody had their say on the speech and the whole room welcomed the optimistic tone of the speech. Everybody seemed to leave content.’

Another source said ministers had shown their approval of the speech by banging on the desk as the meeting was drawn to a close.

Work and Pensions Secretary David Gauke said ministers were ‘very united, very good, all behind the speech’. Asked whether Mrs May had the support of the Foreign Secretary, he said: ‘She has the backing of the Cabinet, from all of us.’

Over the course of the summer, ministers had been divided between those such as Mr Hammond who favour a Swiss-style deal in which Britain would continue to pay for access to the single market, and those such as Mr Johnson, who want a looser arrangement along the lines of the EU’s free trade agreement with Canada.

But Mrs May has sought to bridge the gap, insisting it is not a ‘binary’ choice and she would be seeking a ‘bespoke’ arrangement rather than a pre-existing, ‘off-the-shelf’ model.