‘They don’t know what’s going to hit them!’ Trump rides through Maine in search of an electoral vote

President Donald Trump took his search for a narrow electoral vote path to victory to central Maine, where he toured an apple orchard and attacked the media.

The president flew north after a campaign stop in New Hampshire, where he signed hats and pumpkins and tossed mocking comments toward the press who trailed him for the photo-op.

‘They have no idea and they’re not happy about it,’ he said, gesturing toward the press.

Close to 1,000 supporters gathered at Trewordy Orchards. They loudly booed as reporters and photographers entered the event.

As he spoke a pygmy bleated in repeatedly in recurring bursts.

‘Does the press have any questions for you?’ Trump said, but didn’t allow the chance.

The president grabbed a bull horn and spoke briefly about stripping away environmental restrictions on 5,000 miles of ocean, and touted coronavirus aide payments for lobstermen hurt by the trade war with China.

‘We loosened it up and we got rid of it,’ he said.

President Donald Trump made a campaign stop just 10 days before the election in central Maine Sunday, where he toured an apple orchard proving for some very fall-inspired photo ops 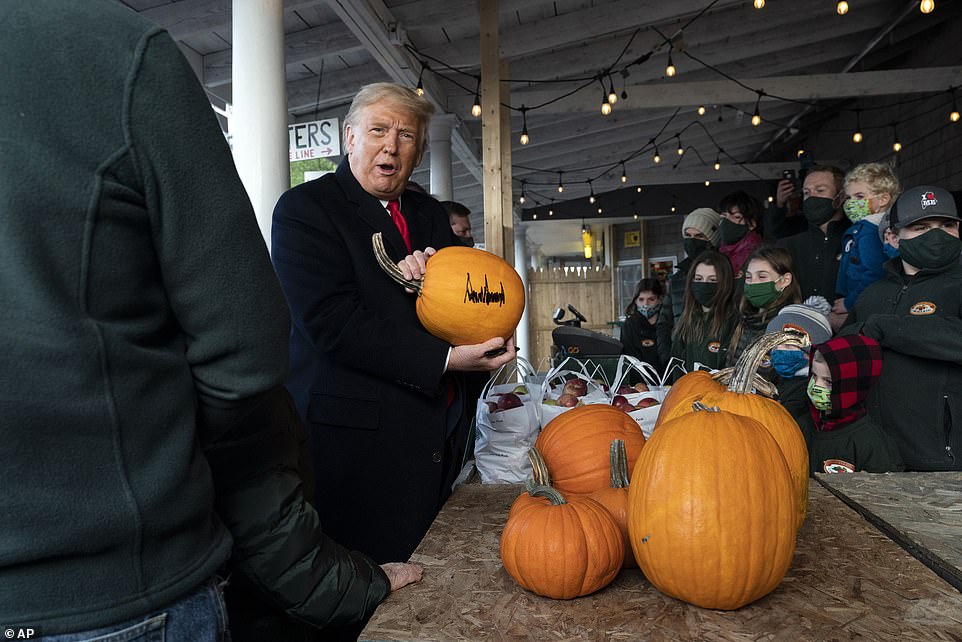 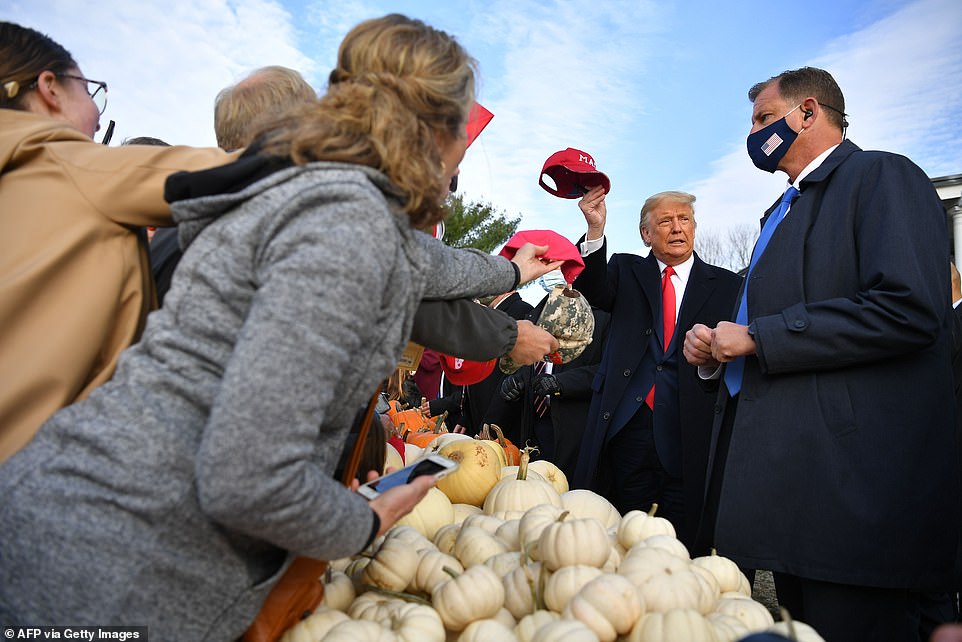 He was accompanied by aides Mark Meadows and Kayleigh McEnany, who didn’t wear masks at the event.

‘They got rid of the tariff,’ Trump said. ‘So now you’re free to go ahead and make money.

Fans chanted Trump’s name and threw out hits on the media, including ‘CNN sucks,’ ‘idiots,’ and ‘Report something on Sleepy Joe!’

‘We love you!’ one supporter

‘We said let’s go up and say hello. We were right next door in New Hampshire,’ said Trump, with apples and donuts for sale.

He noted that in 2016 he won ‘one section’ and said ‘let’s get the other section’ – referencing the 2nd congressional district. Maine splits its electoral votes for president.

After the event was over Trump’s supporters loudly booed the press again as they left.

One man yelled out to chief of staff Mark Meadows to ‘get rid of Schumer and Pelosi.’

‘I’ll work on it,’ he quipped, holding a small bottle of hand sanitizer but not wearing the face mask he had on at the White House.

Trump kept up his full-bore cross-country campaign swing with a Sunday trip to New Hampshire where he mocked social distancing guidelines even as the White House battled a coronavirus outbreak on Mike Pence’s staff.

Just minutes into his speech, Trump began tearing into ‘sleepy Joe’ Biden, who he ridiculed for calling an early ‘lid’ rather than going out to contact voters Sunday.

‘I was told in New Hampshire you can’t have big crowd,’ Trump said in his speech at an outdoor airport venue in Londonderry.

‘You have to go to everyone’s dining room and have dinner with them,’ he quipped. 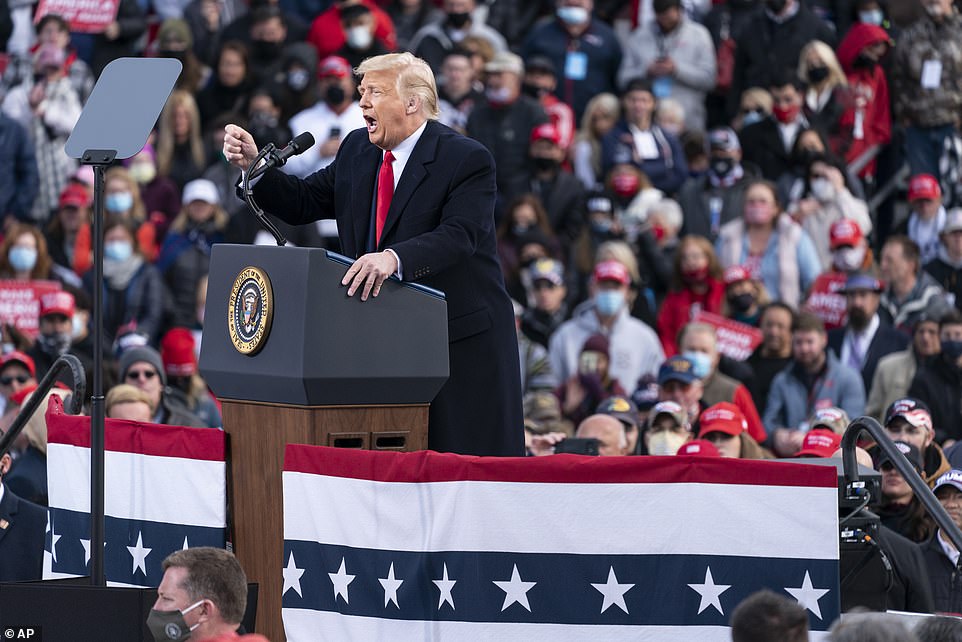 Earlier in the day Sunday, Trump held a rally at the airport in Londonderry, New Hampshire 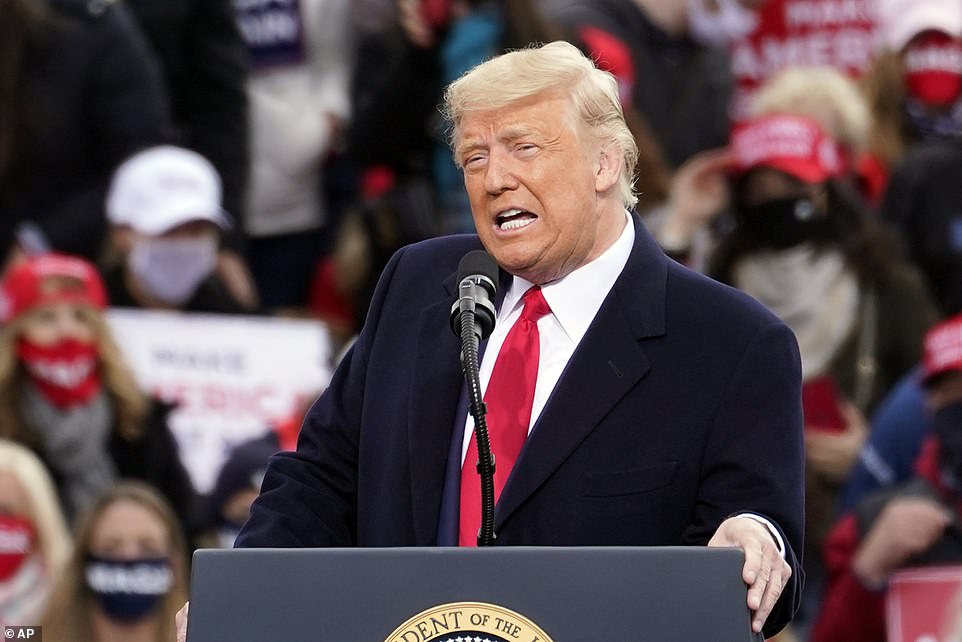 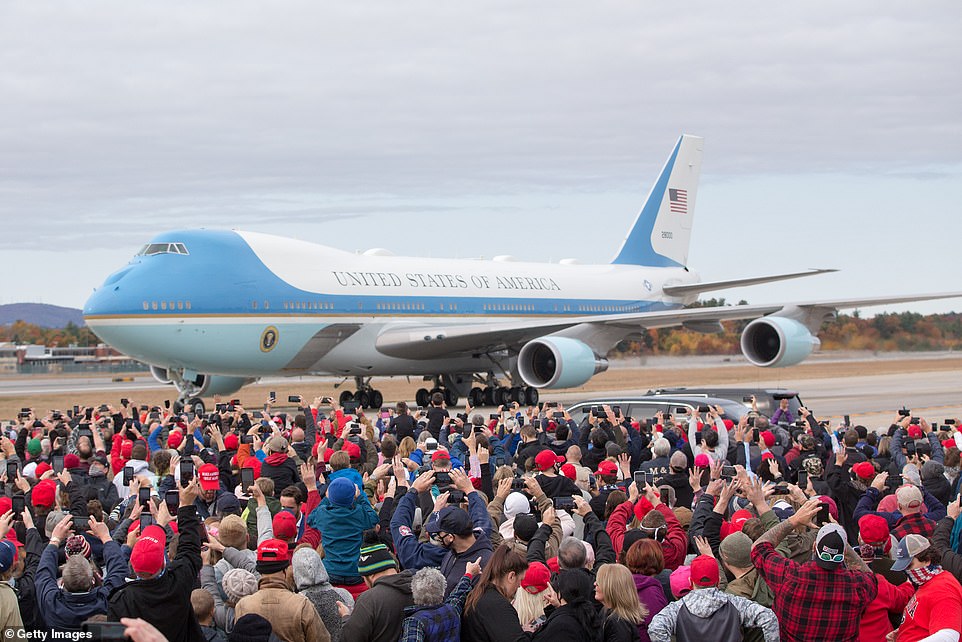 Trump is holding all of his rallies outdoors, even as colder months approach, as he flies into airports all over the country, walks off the plane, and delivers remarks on the tarmac with Air Force One as his backdrop

He talked up his busy schedule of campaign rallies, and contrasted it to Biden’s schedule, which the candidate drastically scaled back from campaign norms amid the coronavirus.

‘I’m doing three or four of these suckers a day. That’s not bad. And he’s got the lid on.’

‘But now with the COVID what do we do? They keep talking about cases,’ Trump said, complaining about media reports on rising U.S. coronavirus infections. ‘You know why we talk about cases? It’s all we do is tests.’

He made fun of Biden’s socially distanced events, including a ‘drive-in’ rally featuring former President Obama.

‘They don’t show Biden’s crowd when seven people show up,’ Trumps aid while complaining about the media. ‘And you know what? They don’t show Barack Hussein Obama’ – Trump said, using Obama’s middle name as he did repeatedly in recent days.

‘He drew flies. Did you ever hear the expression? Obama drew flies. But they don’t show that.’

Biden did call a ‘lid’ – meaning the end of in-person public events for the day – after going to church near his Delaware home. He is set to deliver remarks online for a virtual concert organized by his campaign.

As at prior Trump events, masks weren’t mandatory, and many crowd members eschewed face coverings.

‘We’d better win Corey. [If not] I’ll never speak to you again,’ Trump quipped when acknowledging his former campaign manager who is from New Hampshire.

Trump spent seven minutes of his impromptu remarks talking about modifications to Air Force One in an unexpected diversion with Election Day just nine days away.

‘That’s a long story on the beautiful Air Force One,’ he allowed while wrapping up. ‘Can you imagine after all that, I better win this damn contest.’

He said Biden ‘wouldn’t even know it’s a different plane.’

‘You have to see the striping, it’s incredible,’ he added. ‘I don’t want to see it. He won’t appreciate it.’

He was upbeat about his state-by-state prospects, brushing off polls that have him down in key battlegrounds.

‘You know we’re way up in Florida. We’re doing fantastic in Iowa,’ said Trump of two states that are up in the air.

‘We think really good in Pennsylvania. We’re doing great in the great state of Texas. And these aren’t polls – these are people now,’ he said, on a day when a new poll had Trump and Biden tied in Texas.

He once again ripped Biden and his running mate Sen. Kamala Harris.

‘They’re filled with rage and desperate for power,’ Trump said of the left-wing he casts as controlling his opponents.

Trump headed out for a pair of large airport rallies in New England Sunday as the White House contended with a coronavirus outbreak among Vice President Mike Pence’s staff.

Trump’s trip takes him to an outdoor airport rally in New Hampshire, a state where polling has been sparse but where Democrat Joe Biden leads him by an average of 11 percentage points.

The president also heads to Maine, which divides its electoral college votes by congressional district, and Trump has a chance of picking up a single vote if can can carry the district that includes Bangor like he did in 2016.

Short is one of four Pence aides plus an outside advisor who tested positive for COVID-19.

But Meadows struggled to explain why Pence would continue his own travel – he heads to North Carolina Sunday – after admitting he was exposed to his top aide. 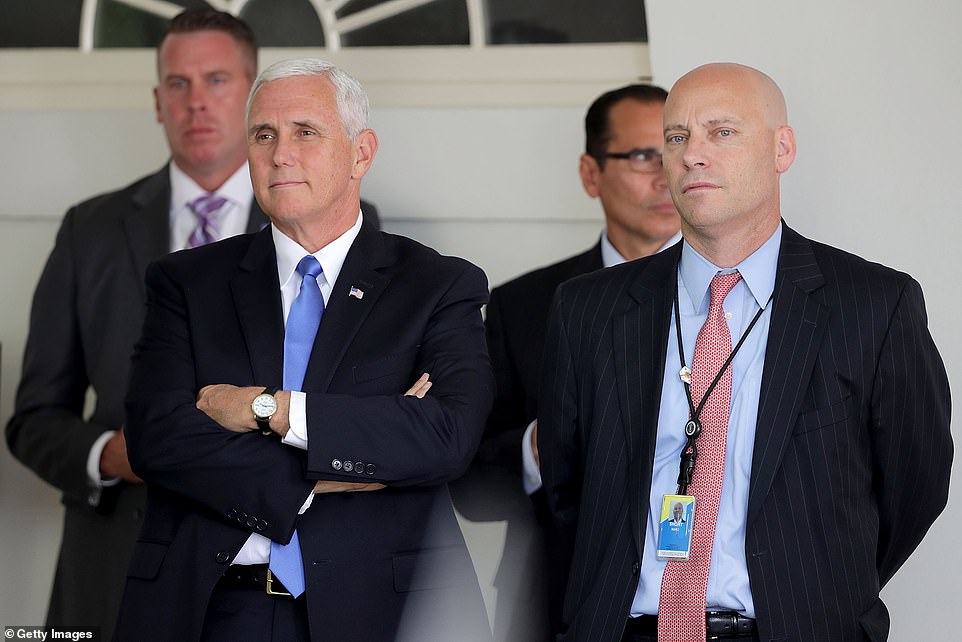 Vice President Mike Pence (left) will also continue to campaign  this week after his Chief of Staff Marc Short (right), along with four other staffers, tested positive for COVID-19 in the last few days 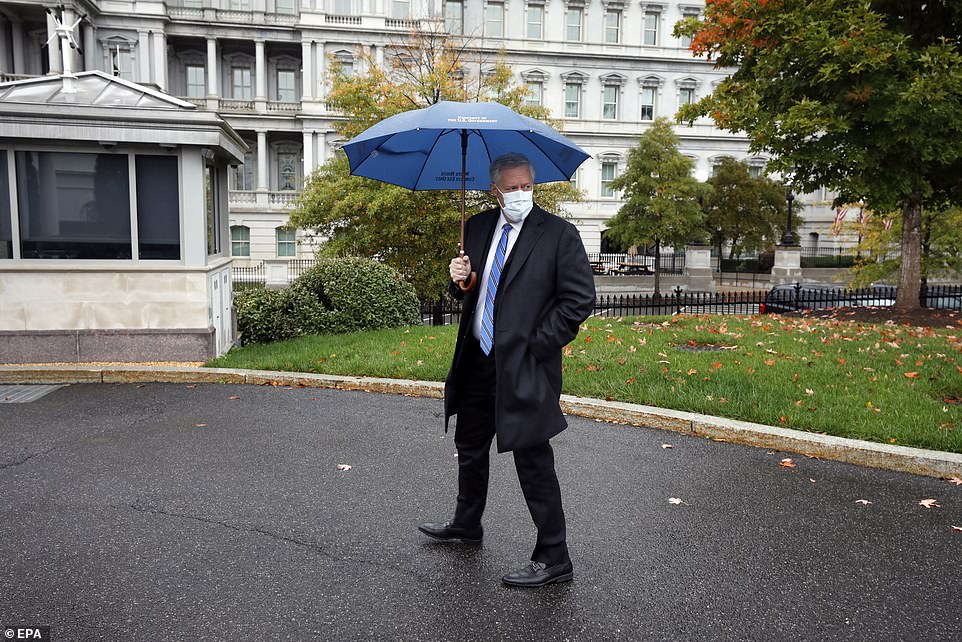 While speaking briefly to reporters on the White House driveway, Meadows said, ‘He (Pence) was cleared by the doctors to travel’

He said Pence was considered an ‘essential employee’ that therefore was exempt from Centers for Disease Control guidelines.

Trump and Pence are both on the road, with Pence campaigning in North Carolina – one of several states Trump carried in 2016 that is now in jeopardy.

Pence’s office said he tested negative for COVID-19 Sunday, even as Meadows refused to provide details on precisely how many aides are infected. He said contact tracing was underway, although several figures during the outbreak at the superspreader event for Judge Amy Coney Barrett said contact tracing did not occur following that outbreak.

Short, along with a senior political adviser and three other members of the vice president’s staff have tested positive for coronavirus.

Short’s diagnosis was first reported on Saturday night by Bloomberg – the same outlet that broke the news of Hope Hicks’ infection on September 29.

Pence’s office later confirmed Short’s diagnosis – with the fact that the White House did not announce the news raising eyebrows.

On Saturday night the New York Times reported that two people briefed on the matter said that the White House chief of staff, Mark Meadows, had sought to keep news of the outbreak from becoming public.

A wild card is how Trump’s trip will play for Collins in Maine. Trump attacked her on Twitter earlier this month. ‘There is a nasty rumor out there that @SenatorCollins of Maine will not be supporting our great United States Supreme Court Nominee,’ Trump tweeted.

‘Well, she didn’t support Healthcare or my opening up 5000 square miles of Ocean to Maine, so why should this be any different. Not worth the work!’ Trump added.