Mark Royden, 47, has been jailed for four years (pictured in January)

A hammer-wielding thief who attempted an extraordinary smash-and-grab on Salisbury Cathedral’s Magna Carta has been jailed for four years.

Mark Royden, 47, tried to steal the 800-year-old ‘priceless’ document yet failed to break through the toughened glass box.

With his carefully-plotted heist scuppered, the bungling thief sought to flee but was chased down and tackled by onlookers, despite him brandishing his hammer menacingly.

In his police interview, Royden, from Canterbury, Kent, insisted that he tried to snatch the Magna Carta to prove it was a fake.

But at trial he was convicted of attempted theft and criminal damage, for which he will serve four years behind bars following today’s sentencing at Salisbury Crown Court.

It could also today be revealed that Royden has 23 previous convictions for 51 offences – the majority of which are theft but some include criminal damage- and has been handed jail terms in the past.

Yet his attempted raid of the Cathedral on October 25, 2018 was branded a ‘gross escalation’ of his prior crimes. 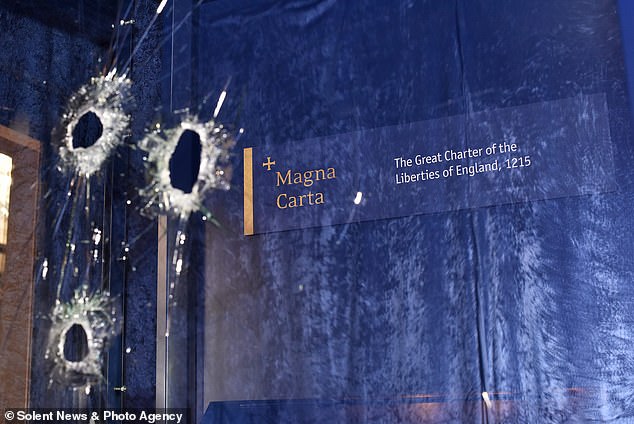 Mark Royden, 47, tried to steal the 800-year-old ‘priceless’ document yet failed to break through the toughened glass box 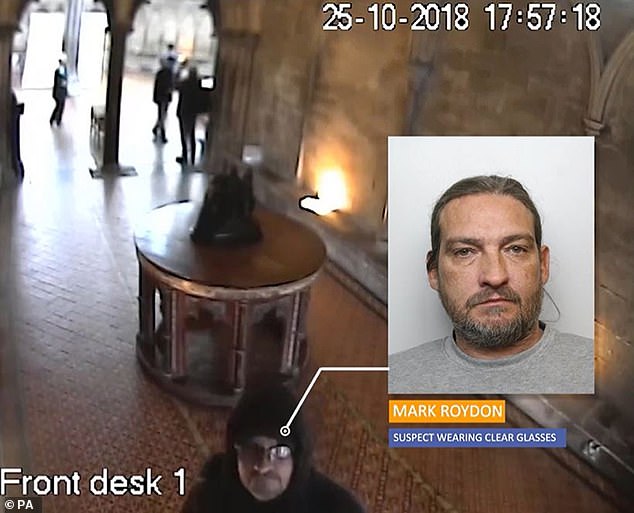 Screengrab from CCTV footage issued by Wiltshire Police of Mark Royden in the hall of Salisbury Cathedral on October 25, 2018

Sentencing Royden today, Judge Richard Parkes QC said: ‘The Magna Carta is a document of huge importance to our country.

‘It is widely acknowledged as the basis for many of our rights including a trial by jury.

‘We are fortunate, no thanks to him that there was no damage to the Magna Carta. This is a story of a few good people acting alertly and bravely.’

He recommended Matt Delcambre and Gary Price, who helped prevent the theft, receive a ‘Sheriff’s Award’ from Major General Ashley Truluck of £1,000 and £500 respectively.

Before attempting to snatch the artefact, Royden had scoped out the Cathedral, wearing gloves, goggles and a hoodie while identifying security cameras and entrances and exists.

And moments ahead of taking a hammer to the glass box, he set off the fire alarm to cause maximum panic to distract from the attempted theft.

Describing Royden’s bid to snatch the Magna Carta, prosecutor Rob Welling had told the hearing: ‘There may well never be an answer to what he was to do when he had it but he took significant steps to get it.’ 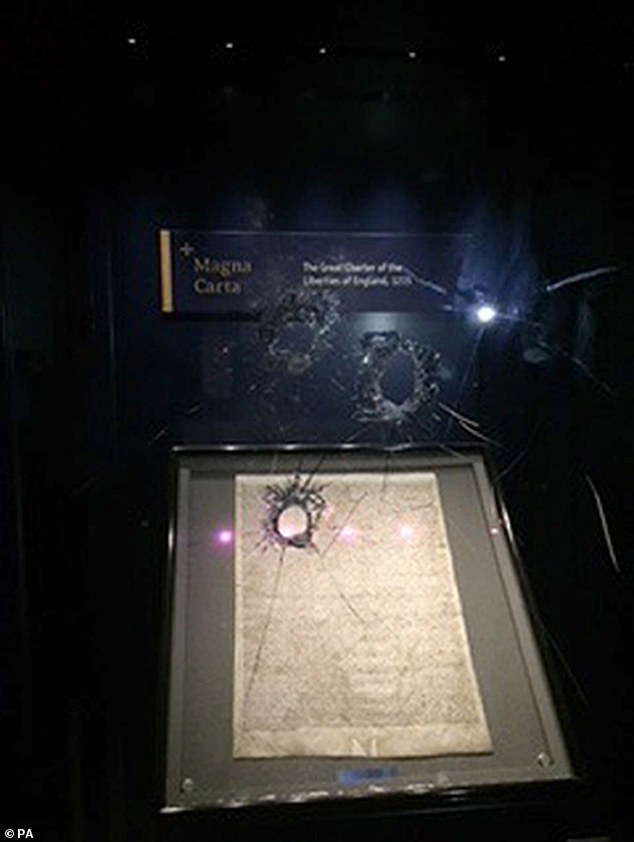 And moments ahead of taking a hammer to the glass box, he set off the fire alarm to cause maximum panic to distract from the attempted theft

Nicholas Cotter, defending, revealed Royden has served jail terms in the past and is a ‘man with difficulties’, adding that attempting to steal the Magna Carta was a ‘gross escalation’ from his previous crimes.

Mr Cotter told the court: ‘It was tragic comedy watching the CCTV and seeing his face frown up at the camera.

‘It is tragic comedy that someone is seen walking through a heritage sight and clearly frightening people.’

The Magna Carta at Salisbury, signed by King John in 1215, is a historic human rights treaty and is the best preserved of only four surviving original examples in the world – and thought to be worth as much as £20million.

It is a world famous artefact which attracts tourists from all over the globe – and now the damaged glass which protected it is even on display at the cathedral.

Matt Delcambre, an American tourist, and Gary Price, clerk of works at the cathedral, tackled Royden to the ground in the works yard after the defendant tried to snatch the Magna Carta from the Chapter House.

As he fled and was restrained, Royden threatened Mr Delcambre with his hammer, told people to ‘f*** off’ and also exclaimed he ‘would’ve got a medal for what he done’ before telling people he ‘could have done more damage with a samurai sword’.

Royden later suggested he had ‘doubts over the authenticity of the Magna Carta’.

He told officers: ‘You cannot talk to me about the Holy Grail. If you find a bag on the floor which says ‘cocaine’ on it, you would have to test it forensically.

‘As for your Holy Grail, you would need a carbon test and a trace element test.’

During his trial, he unsuccessfully argued he was ‘in the wrong place at the wrong time’ and had therefore become the ‘wrong man to be arrested’.

Royden, of Canterbury, Kent, was sentenced to four years in prison for attempted theft, and two years for criminal damage. The sentences are to run concurrently.