Thierry Henry admits start to life at Monaco has been tough

‘We are not in a situation that allows us to laugh’: Thierry Henry admits start to life at Monaco has been tough as he prepares for first Champions League encounter against Club Brugge

Thierry Henry has admitted that Monaco are in a difficult moment and hopes Wednesday’s Champions League encounter against Club Brugge can act as a tide-turner.

Henry’s long-awaited first game as a manager ended in a 2-1 defeat at Strasbourg on Saturday, with Monaco’s night marred by goalkeeping errors, a sending-off and injuries.

The result leaves Les Monegasques, who finished second last season, 19th in Ligue 1 after 10 games. They also sit bottom of Group A after losing both of their opening two Champions League games.

And Henry is looking at Wednesday’s game as an opportunity for his team to regain some confidence.

‘We are not in a situation that allows us to laugh but we work in humility, respect and joy,’ he told the club’s website.

‘We produced a game in Strasbourg but that did not turn in our favour with the injury of Falcao and the red card of Grandsir. We seek a victory to get more confidence. We are here to work.

‘Club Brugge is a team that fights from beginning to end. They defend together, they attack together. We will try to block them. After Strasbourg it’s good to play again quickly. The Champions League is a dream, we must take this competition as a chance to regain confidence.’ 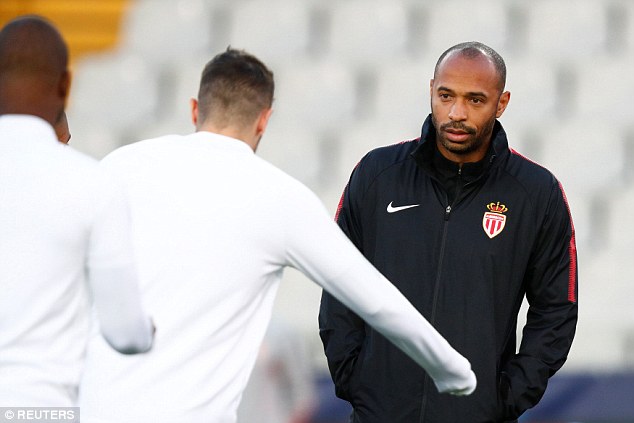