After a slow start, Copa America 2019 in Brazil has finally heated up after a pulsating round of final group-stage matches.

As we advance to the knockout phases, it’s do-or-die time for eight hopefuls aiming to be South American kings.

Here, Sportsmail has broken down the main things for you to look out for during the quarter-finals.

Crowds have woken up…and are coming out in force

Low attendances and a lack of enthusiasm from locals have been the main criticisms hurled at the Copa America thus far.

On Saturday, however, a 42,000 near-capacity crowd roared Brazil on to a 5-0 win over Peru in Sao Paulo while, on Monday, a record 57,000 punters turned up in the Maracana to watch Chile take on Uruguay.

The travelling hordes from neighbouring countries have begun setting up bases in Brazilian cities to get behind their countrymen, and expect their fanatic passion unique to this part of the world to spill from the streets and into the stadiums as the business end of the 2019 Copa America approaches.

Chile’s clash with Colombia is already sold out, and the host’s match against Paraguay is heading the same way.

In a format familiar to Copa Libertadores fans, any quarter final match tied after 90 minutes will go directly to penalties.

Extra time will be reintroduced in the semi-finals and final, but for Chile the prospect of an early shoot-out holds no fear.

Denying Lionel Messi’s Argentina the crown from the spot on consecutive occasions in 2015 and 2016, the reigning champions will face England’s Russia 2018 shoot-out victims Colombia at the Arena Corinthians. 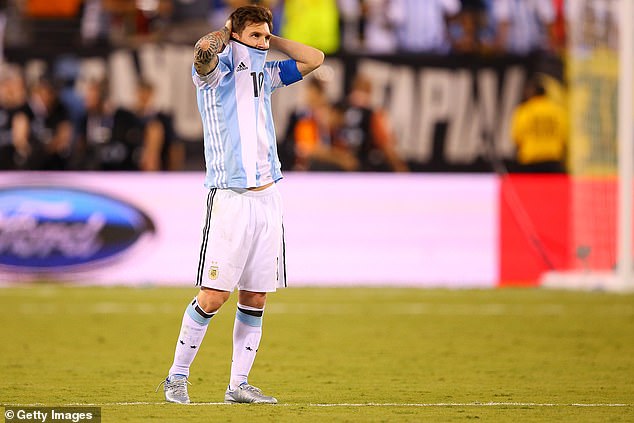 Defences will be hard to break down

While Argentina and Peru’s back lines have left a lot to be desired at times, their main rivals in Brazil, Colombia and Uruguay boast some of world football’s greatest centre back pairings and have racked up clean sheets with ease.

Even other outfits such as Venezuela especially have put on tight defensive displays. Goals may be tough to come by. 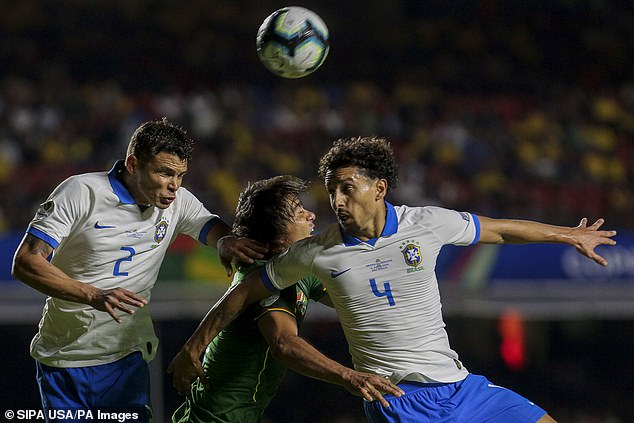 VAR will leave its mark

Just as it is proving at the Women’s World Cups this year, VAR has been particularly problematic at the Copa America.

In addition to Brazil being denied a breakthrough goal three times via the system against Venezuela, there have also been dubious, game-changing penalties awarded — as with that seen in Edinson Cavani’s favour against Japan.

Excruciatingly long waits for decisions are another factor, and across the 18 games thus far, there have already been 17 interventions and 15 decisions reversed.

In circumstances where the stakes are so high, VAR is destined to come into focus during the quarter-finals. 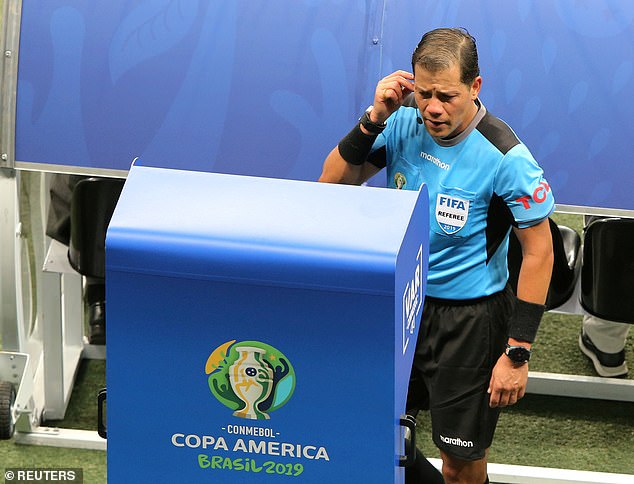 Copa America has proven problematic during the tournament, with lengthy delays

Masters of the dark arts on show

As the pressure intensifies and the stakes rise, expect some of the sport’s biggest tricksters to employ their full repertoire of dark arts mastery when trying to gain an advantage.

If you thought you had seen it all when Luis Suarez appealed for a penalty to be given against Chile ‘keeper Gabriel Arias on Monday – then demanding Gonzalo Jara be sent for an early bath after kicking a chicken-masked pitch invader – think again. 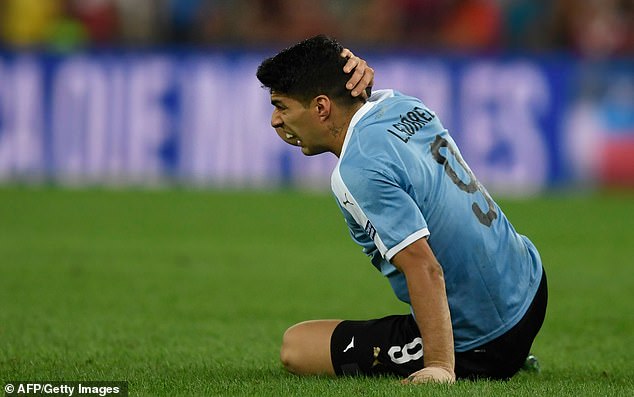 Luis Suarez has already shown the lengths he’ll go to to get an advantage, and others will too

Another quarter-final without Casemiro for Brazil

Outstanding at the weekend when netting for the first ever international strike, Casemiro also picked up a yellow against Peru and will miss Brazil’s showdown with Paraguay at the Arena do Gremio.

Their opponents don’t pack the same punch as Belgium – who sent Tite’s men packing in Kazan last summer – but the anxiety caused by the Real Madrid enforcer yet again missing a key fixture at this stage of a major competition casts a shadow over the Selecao.

Much to the relief of many who feared Fernandinho – the own goal-scoring scapegoat of the 2-1 loss to the Belgians – would step in, Casemiro is to be replaced by Napoli’s powerful box to box midfielder Allan.

As an aside, it is also worth noting that Brazil were knocked out on penalties by the Paraguayans in 2011 – when they missed all four of their attempts – and again in 2015.

Argentina must avenge their most shameful recent loss

Guaranteeing their progress with a 2-0 win, Argentina improved against Qatar last time out but will need to be even better when facing Venezuela.

No longer the continent’s punching bag, the defensively-sound Venezuelans kept clean sheets against Peru and Brazil in 0-0 stalemates while beating Bolivia 3-1.

Coincidentally, this is the same scoreline that Rafael Dudamel’s talented young squad beat the Argentinians by in a friendly in March.

To set up a potential semi-final with eternal rivals Brazil in the Mineirao, an embarrassing defeat for the 14-times winners must be avenged by Messi and Co. 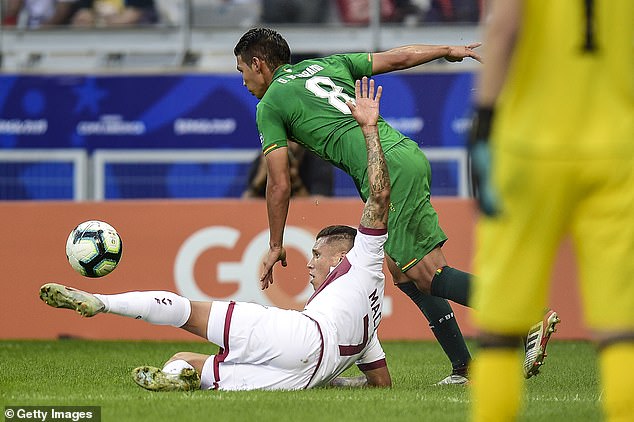 Best team to face holders in the pick of the ties

After being beaten by England at the World Cup, the Colombians have come on leaps and bounds under Carlos Quieroz and have taken maximum points from their Group B fixtures without conceding a single goal.

On Friday they face Chile in Sao Paulo, meaning that either thein-form side at the competition or the back-to-back champions will be sent home.

With James Rodriguez and Alexis Sanchez both in revitalised form, this is by far the most attractive tie the quarter-finals have to offer. No wonder it’s already sold out.

Peru given another roll of the dice

Despite being hammered by Brazil and doing their goal difference no favours, Peru still managed to stay alive at the Copa America by finishing third in Group A.

Leaking five against a Neymar-less Brazil however is a major concern, and this cannot happen again when trying to keep Edinson Cavani and Luis Suarez at bay.

Netting on six occasions in eight appearances, the Barcelona striker — known as El Pistolero — has proved a thorn in the Peruvians’ side throughout his illustrious international career. 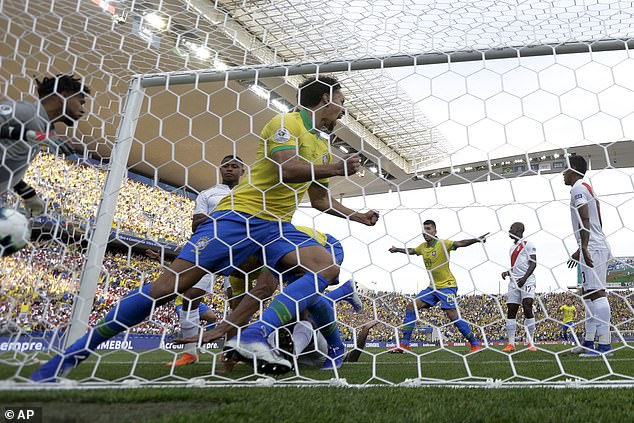