This Crete retreat will whip you into shape!

Exhausted and frazzled, I was looking forward to a lazy week. My two daughters, Marina, 13, and Sofia, ten, had other plans.

‘Come on, it’s time for Aqua Fit,’ announced Sofia on day one at our swish hotel in Crete, barely ten minutes after I had plonked myself down on a sun lounger.

Sure enough, I was dragged into the vast swimming pool to join 20 or so women and children, and a handful of reluctant looking chaps, to do star jumps as music boomed from a loudspeaker.

Lap of luxury: The swish Cavo Spada Resort and Spa offers a range of exercise classes including Aqua Fit

Nicklas, our Adonis of a Swedish instructor, shouted: ‘You’re not going to complain it’s too easy today, are you?’ Fat chance, but I was struggling to keep up with women of a certain age.

We were staying at Cavo Spada Resort and Spa, a 40-minute drive from Chania airport in the North West of Greece’s largest island, where it’s delightfully warm for the October half term.

The 150-room beachside hotel — which has been fully renovated — has panoramic views of Cape Spada, where a naval battle was won by the Allies in World War II.

In addition to Nicklas, there were three other Swedish fitness instructors. They led runs or power walks before breakfast, arranged volleyball matches, spinning classes or, for the ambitious, high-intensity training. All free of charge.

I had never been to a yoga class. The girls and I joined the 9am session, where enthusiastic Naemi urged us to ‘feel the sea breeze’.

Crete’s Caves of Matala were a favourite Sixties hippie-hangout for the likes of Bob Dylan, Cat Stevens and Joni Mitchell.

I was too busy trying not to fall over as I drew my left leg up to my thigh in the Tree Pose.

Evenings could be energetic, too. One night we were entertained by traditional Cretan dancers, performing routines that involved men dressed like Scout masters in brown trousers and black boots, leaping into the air and slapping their feet.

They encouraged us to join them in the only Hellenic dance most of us knew, Zorba the Greek.

Happily, the resort is just as enjoyable for those who prefer sunbeds to circuit training and is perfect for children of all ages, with a range of kids’ clubs. 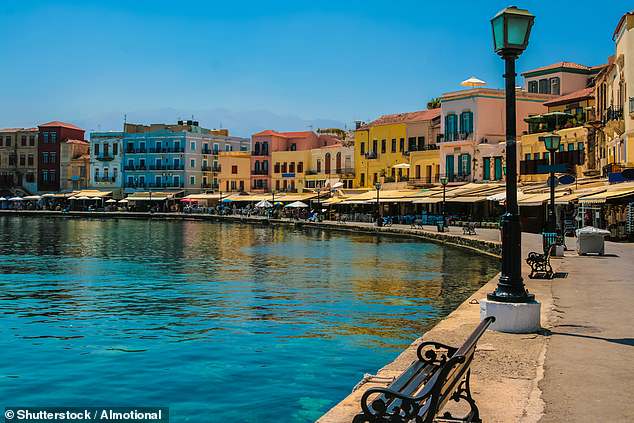 The city of Chania on the island of Crete, pictured, which has a 14th-century Venetian harbour with one of the world’s oldest lighthouses

The sea is a two-minute stroll, a quiet beach bordered by pine trees. Bring jelly shoes, though, as the beach is pebbly.

There’s a spa with a mind-boggling range of treatments, and among the less strenuous activities are cookery lessons, where Sifis, a handsome Greek chef with a salt-and-pepper beard, taught us how to fry a sizzling prawn Saganaki, enriched with a shot or three of Ouzo.

There was so much to do that we ventured out only once, to Chania, half an hour away (€3 on the bus or €30 in a taxi). We sauntered down to the 14th century Venetian harbour with one of the world’s oldest lighthouses.

‘This is so Instagrammable,’ Marina declared.

For those not familiar with teenage social media habits, that’s high praise indeed.