‘A cat can’t lead a blind person or alert to fits’: This Morning viewers hit back at autistic man, 51, who is suing Sainsbury’s for banning his ‘assistance cat’

This Morning viewers today engaged in an online debate with an autistic man who is suing Sainsbury’s for banning his ‘assistance cat’.

Ian Fenn, 51, from Tooting, who was diagnosed with autism two years ago, said on This Morning on Tuesday that Chloe the rescue cat sits on his shoulders and stops him from feeling ‘overwhelmed’ and ‘anxious’.

However outraged viewers took to Twitter to argue a cat can’t be considered as an assistance animal, with one person saying a ‘cat can’t lead a blind person or alert to fits.’

Web designer Ian was asked to leave a branch of the supermarket in south London in March because of his feline friend.

Sainsbury’s, which welcomes assistance dogs, argues that cats pose a food hygiene risk, but has asked its environmental health team to try to find a solution.

Ian is taking the supermarket giant to court to argue his case which could set a new legal precedent.

The Equality Act 2010 puts a duty on employers to make reasonable adjustments to the workplace or its practices to ensure disabled people are not at a substantial disadvantage. 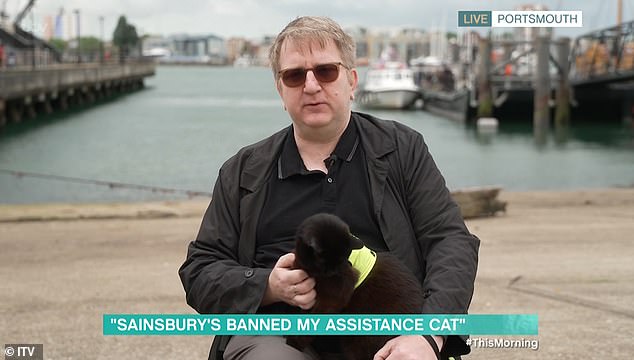 This Morning viewers were outraged after Ian Fenn, 51, from Tooting, who was diagnosed with autism two years ago, sued Sainsbury’s for banning his ‘assistance rescue cat’ Chloe

One viewer wrote: ‘To stop people taking the mick with assistance animals. A cat can’t lead a blind person, a cat not trained can’t alert to fits etc. he makes a mockery of those of us that have all of the appropriate training for guide dogs.

She continued: ‘Please give me all of the appropriate proof of the cat being trained. Assistance animals go through months sometimes years of rigorous training to be a guide dog or medical assistance dog… if this cat hasn’t been trained then it doesn’t qualify with the laws. There’s legit laws.

Using his cat account @chloe_blackcat Ian replied: ‘I do have proof of training. And I offered it to Sainsbury’s. They refused to consider it.’ 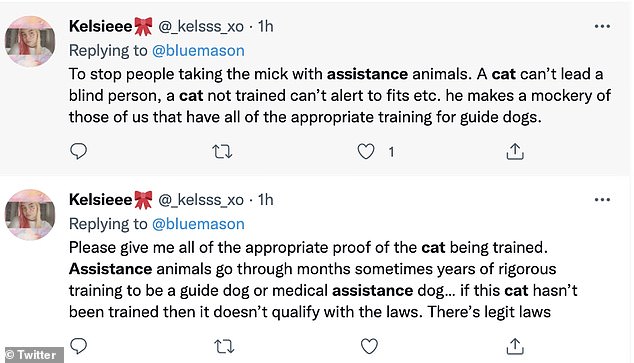 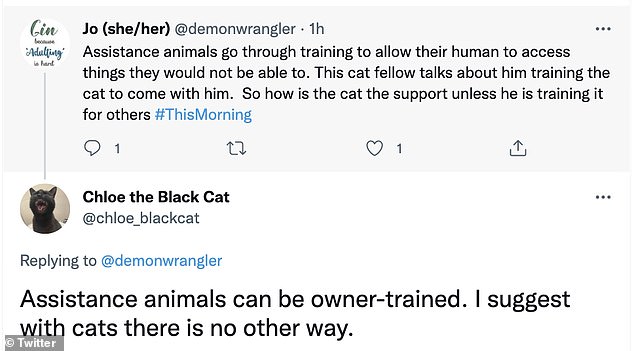 Another person said: ‘Assistance animals go through training to allow their human to access things they would not be able to.

‘This cat fellow talks about him training the cat to come with him. So how is the cat the support unless he is training it for others #ThisMorning’

Another viewer pointed out: ‘Is it the same training that all the other animals go through? I’m sorry but your cat is what’s called an emotional support cat, it doesn’t alert to fits or to diabetic issues, doesn’t guide you as a blind person, it’s there because you “don’t do well” talking to people.

Ian argued that his cat does much of what an autism assistant dog does.

He said: ‘I’m sorry if you do not understand autism. Chloe does much of what an autism assistance dog does. Your tone suggests you’re not interested in learning.’

When some people questioned about customers with cat allergies, Ian replied: ‘Chloe is treated to prevent human allergies. Sainsbury’s allow assistance dogs and dog allergies are a marginally bigger issue than cat allergies, according to the latest data.’

Ian took to Chloe’s Twitter profile to explain: ‘Having a hidden disability means having to constantly provide other humans with explanations. It also means some of those humans will tell you that you would have got what you were entitled to if you had asked nicely.’