The flight routes you HAVE to bag a window seat on: From the Grand Canyon to the Alps, pilots reveal their favourite scenic journeys (and some incredible cockpit snaps from them)

They say the journey can be the best bit of the holiday.

And these pictures prove the point.

They’ve all been taken by pilots from Thomas Cook, who voted for the flights that they think are the best for awe-inspiring views on take-off, landing or mid-flight.

The recommendations include Manchester to Enfidha Hammamet Airport in Tunisia, which offers stunning vistas over The Alps, and London Stansted to Skiathos, which wraps in unbeatable views of both the Croatian coastline and the Greek islands dotted around in the Aegean and Ionian seas.

First Officer Victoria McCarthy said: ‘As pilots, we are lucky to have the best office window in the world, so when we take our travellers on holiday, we try to use the PA as much as we can to let them know what they can actually see out of the window – not just the routing information.

‘It might be an incredible view of Venice, or the Alps. I never take it for granted, so it’s important to me that everyone enjoys the whole flying experience.’ Scroll down to find out which routes you’ll definitely want to bag a window seat on…

One of the best ways to get a stunning view of the white peaks of the Alps is to catch a flight from Manchester Airport to Tunisia. According to pilot Jason Ramsey, an early morning flight is best, although any flight in daylight hours should be fine 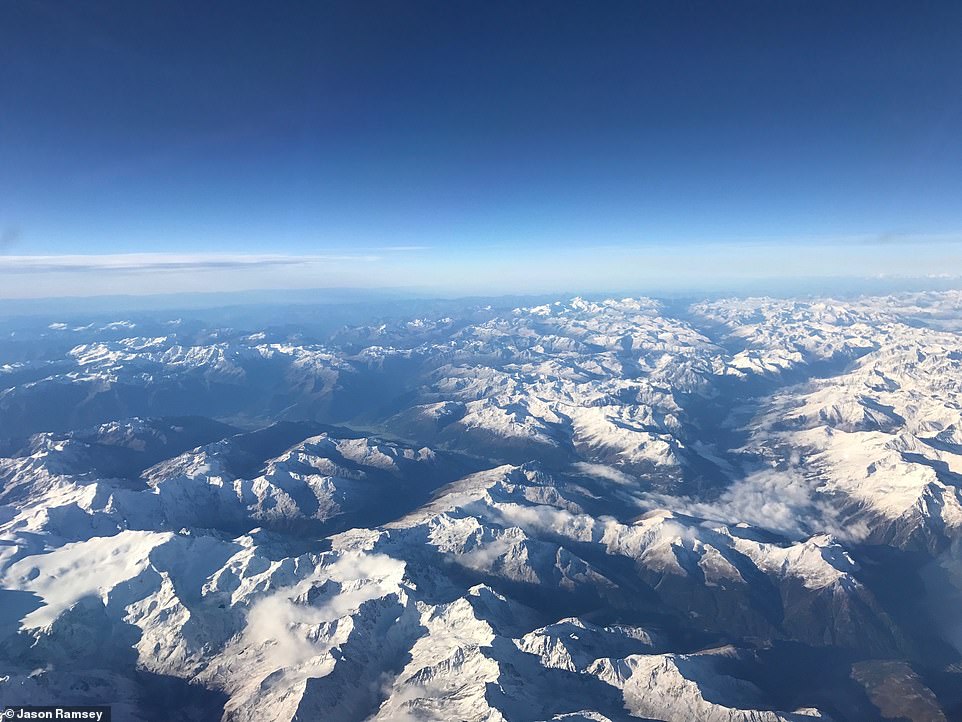 Ramsey says that the left-hand side of the plane is best on the way out of Manchester and, following the same logic, the right-hand side best on the return for optimum views of the Alps. He added: ‘If you’re lucky or eagle-eyed, you may even be able to make out Mont Blanc, Europe’s highest mountain’ 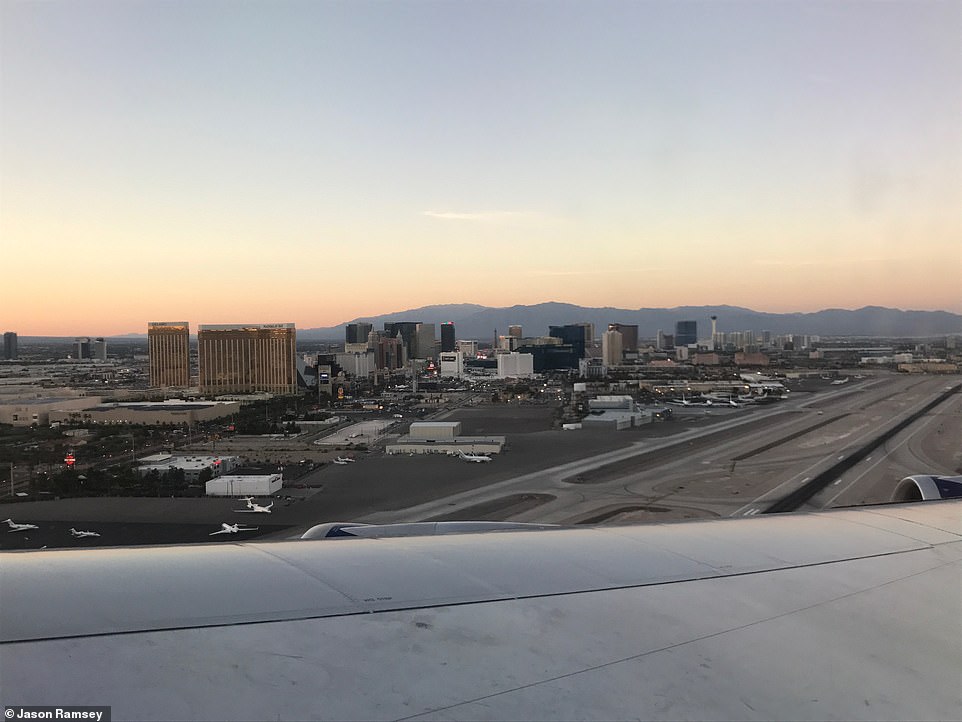 A firm-favourite route with Thomas Cook Airlines’ pilots for views is from Manchester Airport to Las Vegas, because the Las Vegas Strip and its bright neon lights hove into view on the approach 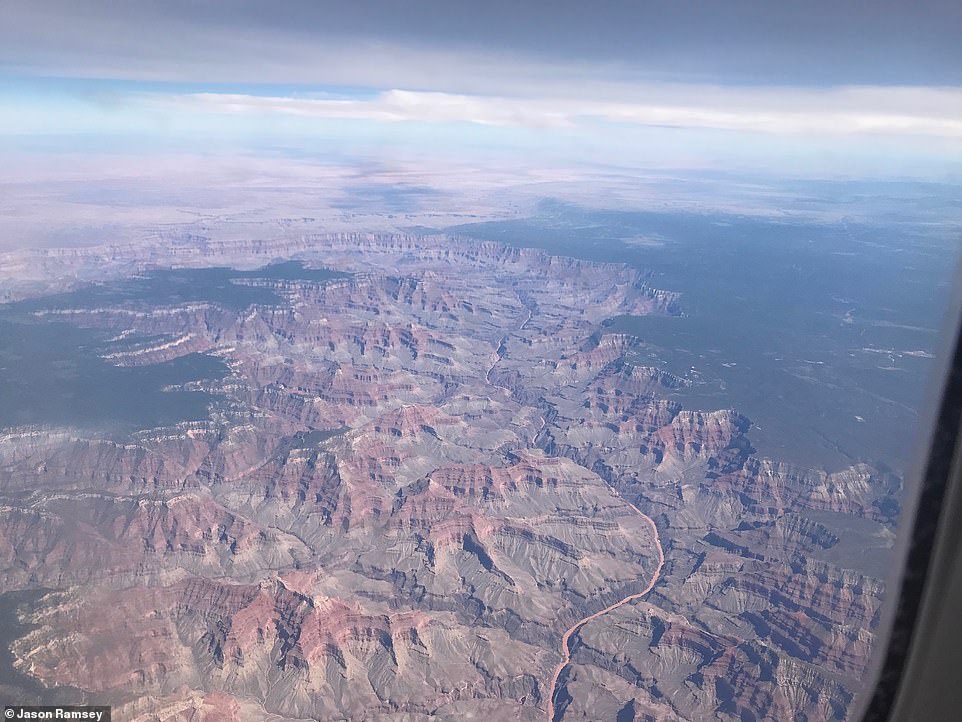 As well as seeing The Strip, passengers on the Manchester to Las Vegas route are also treated to incredible views of Grand Canyon National Park. Pilot Dave Crichton says passengers can take in the scenery either flying into or out of Las Vegas and from either side of the aircraft 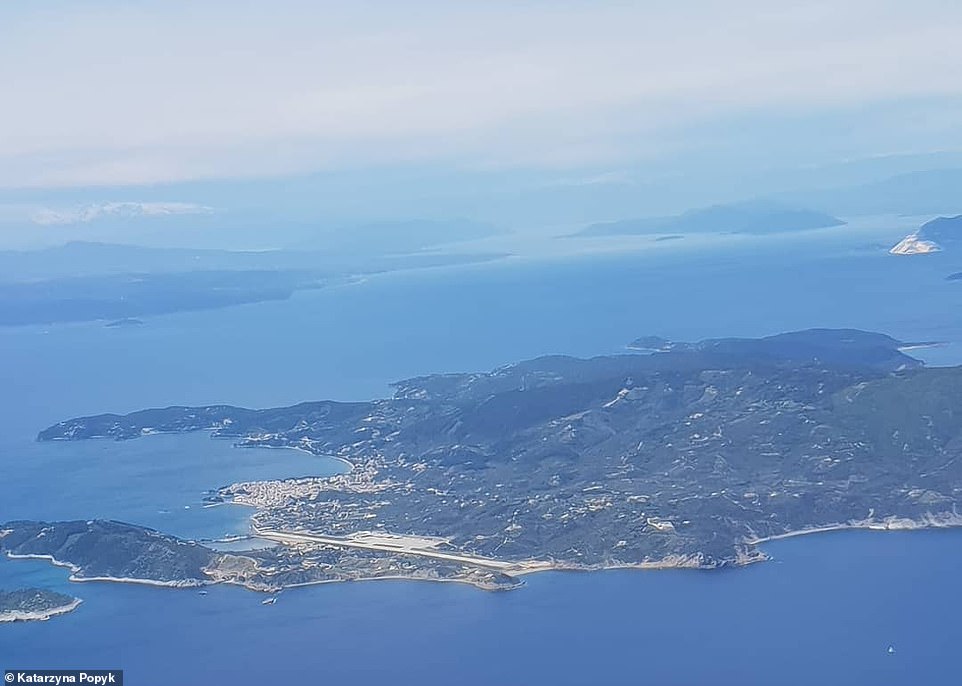 According to Thomas Cook Airlines’ pilots, taking an early morning flight from Stansted to Skiathos means passengers will see the Alps, Croatia’s coastline and the incredible Greek islands scattered throughout the Aegean and Ionian seas. Pilot Victoria McCarthy said: ‘Coming into land over the Greek Islands is my favourite. Not just the view but the fact everything is happening at once, and all coming together. Landing is the most exciting part for the pilot.’ Pictured is the island of Skiathos 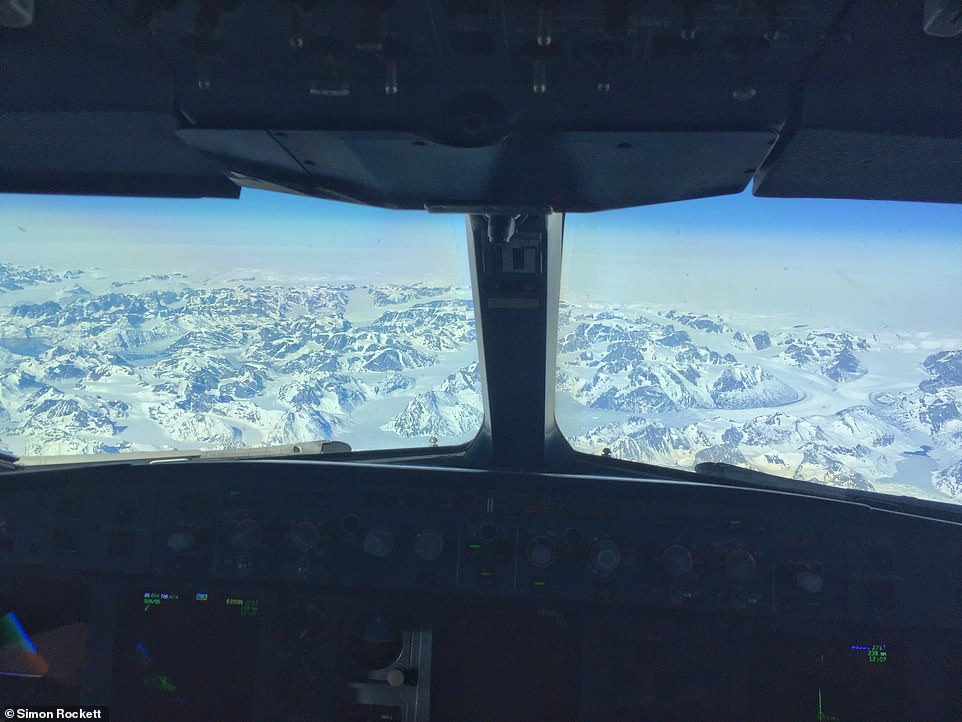 Most of Greenland is covered by a sheet of bright white ice but according to Thomas Cook Airlines’ pilots, the fringes of the  island have more colour, meaning it can be made out from the windows of passing planes. On a clear day, the fjords cutting into the coastline and glaciers rising out of the water are sometimes visible 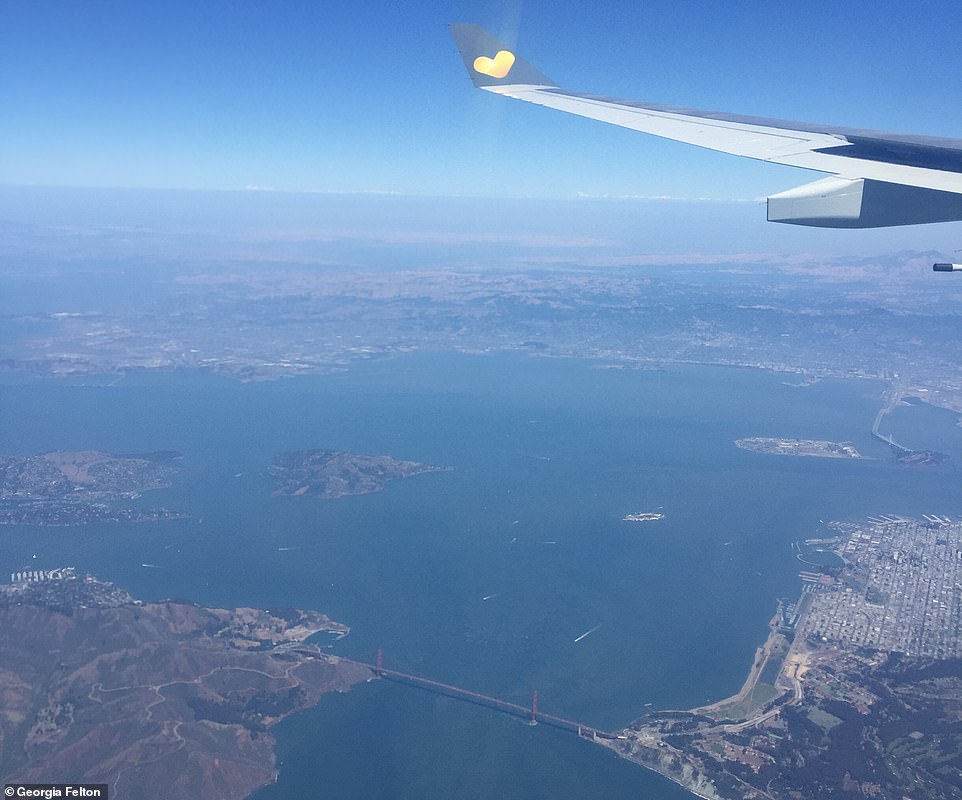 Pilot Jason Ramsey says the iconic New York skyline is a sight that takes some beating – especially at night. As a bonus, he adds that it doesn’t matter which side of the aircraft you are sitting on during the approach to the Big Apple, as both guarantee splendid views 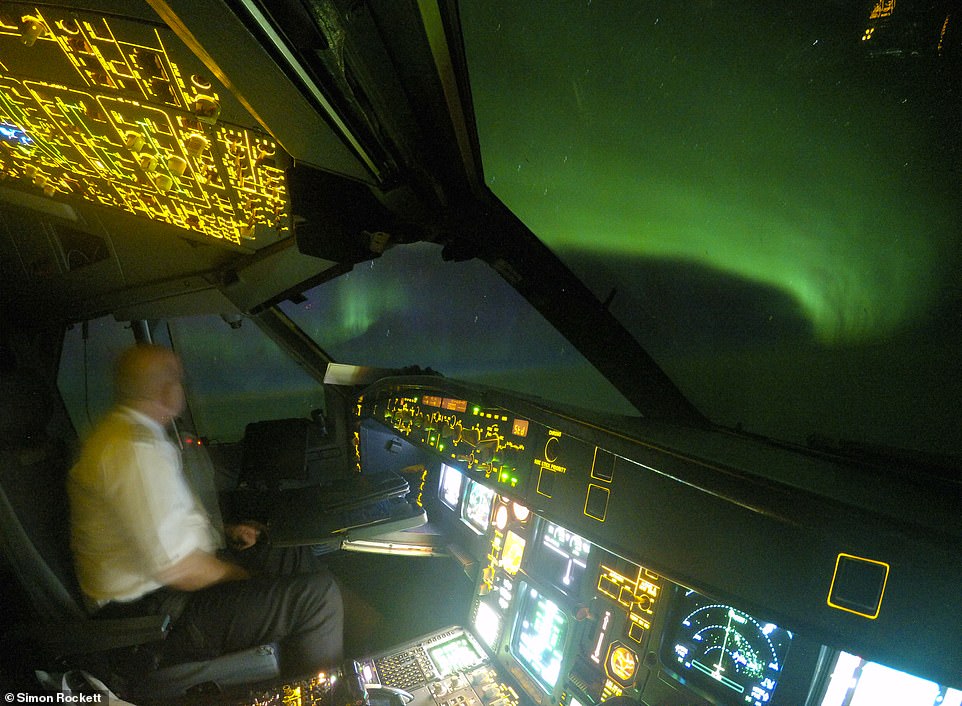 Passengers flying from London Stansted to Oslo at night are sometimes lucky enough to see an aerial view of the Northern Lights. Pilot Simon Rockett recently caught this fantastic view of the Aurora Borealis from the flight deck 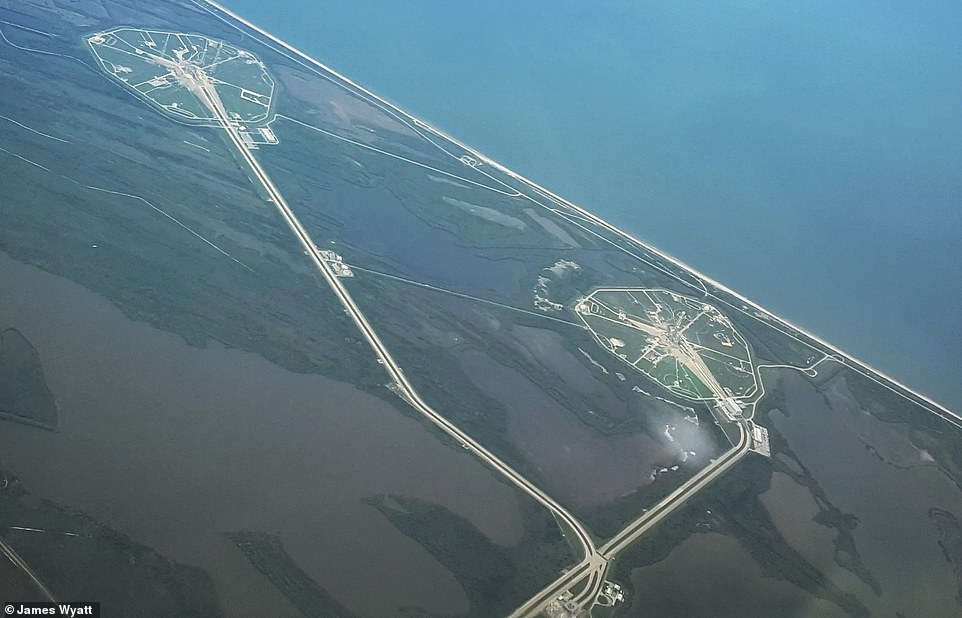 On the flight from Orlando International to London Gatwick, the plane flies directly over the Kennedy Space Center in Cape Canaveral. Pilots say passengers wanting to catch a view should ideally be on the left-hand side of the aircraft