Widely thought of as Meghan’s BFF – and unofficial stylist – Jessica Mulroney is a clear front-runner, although her US location means she’d be a godparent from afar.

The American stylist, a mother-of-three married to Canadian TV host Ben Mulroney, is so close to the Duchess that her four-year-old daughter, Ivy, was a flower girl at the royal wedding.

Her seven-year-old brothers John and Brian had the honour of being page boys.

The 39-year-old, who divides her time between Toronto and New York, where she works for Good Morning America as a fashion contributor, even has photos of the royal wedding in her home, with the stylish black-and-white snaps revealed in a video she posted last year.

Among those closest to the Duke and Duchess of Sussex who could be named godparents of their first child, is Meghan’s best friend and unofficial stylist Jessica Mulroney (pictured)

Despite being predominately based in New York, fashion designer Misha has maintained a close friendship with the Duchess.

She was the creative mind behind the t-shirt the Duchess of Sussex wore for her first public outing with the Prince at the Invictus Games in Toronto in September 2017, and was at one point thought to be the matchmaker behind their royal romance.

The pair also go way back; prior to joining the royal family Meghan enjoyed regular holidays with Misha and her best male friend Markus Anderson. 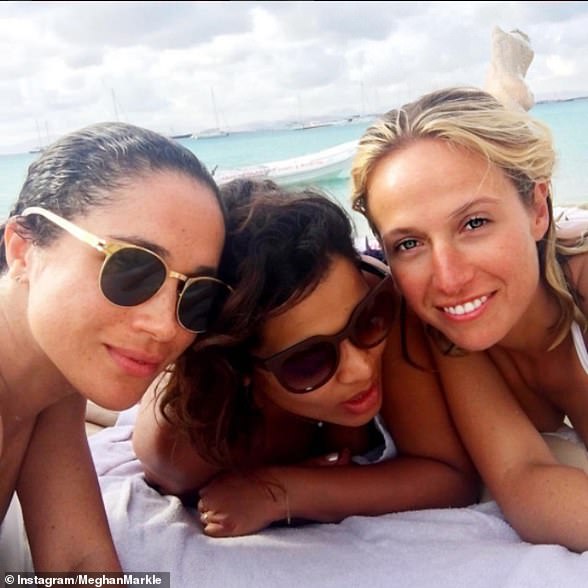 Misha Nonoo (pictured on holiday with Benita Litt and Meghan) has maintained her close friendship with Meghan since she married Prince Harry, despite being predominately based in New York

If Meghan decides a reciprocal godparenting arrangement might be best, then she may well look to the mother of her own godchildren.

Benita Litt, mother to Remi and Rylan Litt, was spotted close to Meghan’s mother Doria at the royal wedding with the pair clearly delighted to be representing the Duchess’s side of the family.

A former entertainment lawyer, high-flying Benita has previously been on holiday with the royal – and if you needed any further proof of their solid friendship, the pair also spent Christmas 2016 together. 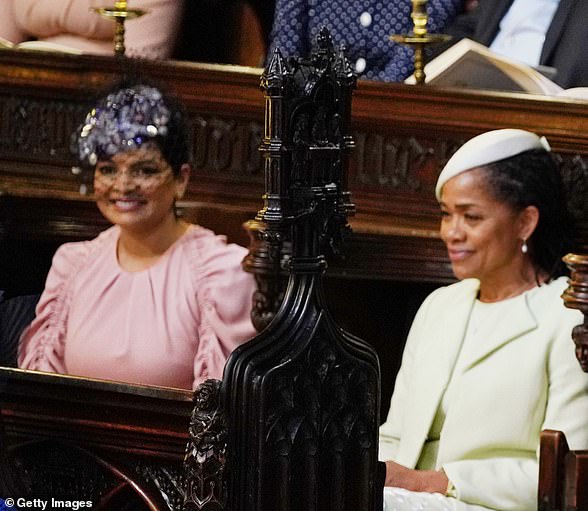 Keeper of some of the Duchess’ oldest secrets, Lindsay Roth is a fellow alumni from Northwestern University in Illinois, where the pair bonded in an English literature class studying Toni Morrison’s works.

Now a successful TV producer and author, Lindsay has already bestowed a role on Meghan, choosing her to serve as her maid of honour at her wedding in 2016. 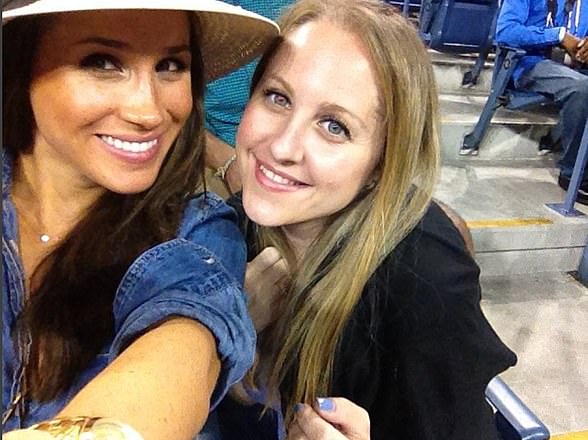 Tennis icon Serena Williams has remained close friends with Meghan since the pair first met in 2010 at the Super Bowl in Miami, Florida.

Meghan previously wrote about their friendship on her lifestyle blog, The Tig, saying the pair had found an instant affection.

‘We hit it off immediately,’ she said. ‘Taking pictures, laughing through the flag football game we were both playing in, and chatting not about tennis or acting, but about all the good old fashioned girly stuff.’

The sportswoman, 37, was one of the pals involved in organising her baby shower in New York – and admitted that she’d pulled out all the stops to make it perfect for her pal.

She told Business of Fashion: ‘Planning something like that takes a lot of effort. I’m a perfectionist, so I’m like, ‘Let’s make it perfect’.’

Serena was a guest at St George’s Chapel Windsor when Meghan married Prince Harry last May, and was one of the close friends invited to their more ‘intimate’ evening do for 200 friends. 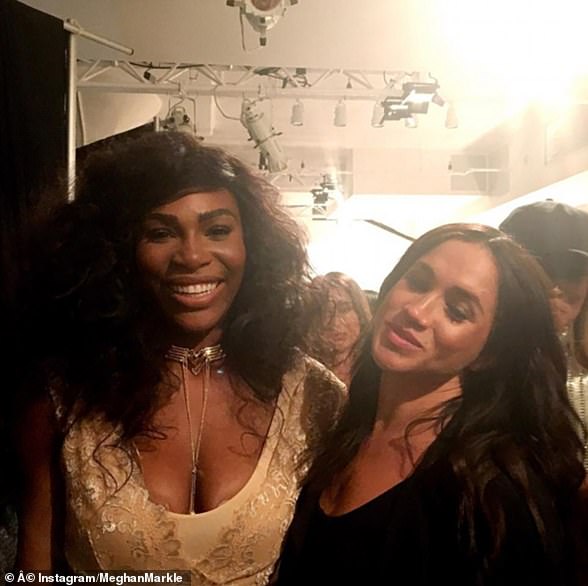 Human rights lawyer Amal Clooney, 41, and her husband George, 57, were in attendance at Prince Harry and Meghan’s wedding.

The mother of twins, who developed a friendship with the duchess during her transition to London, are connected through celebrity hair stylist Miguel Perez.

According to Elle, Meghan has been relying on Amal’s advice for coping with being in the public eye.

Amal and her husband are part of the well-heeled set of Berkshire-based celebrities who live close to Harry and Meghan’s new home at Frogmore Cottage.

Their sprawling home is just a 30-minute drive from Windsor and the couples are said to socialise regularly.

Harry and Meghan also spent a few days with the Clooneys at their 18th century Villa Oleandra in Lake Como in August 2018, relaxing by the pool and playing basketball. 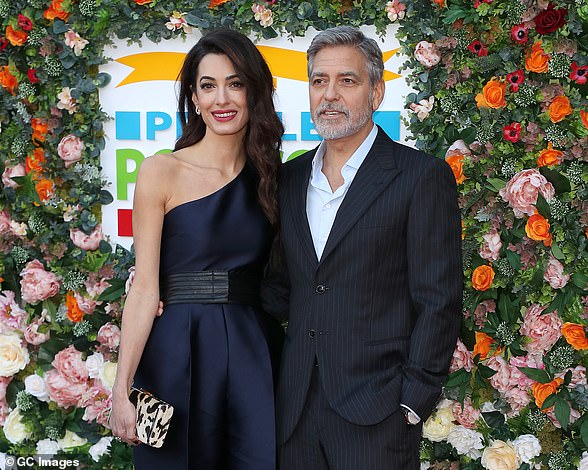 She was also a childhood friend of Harry’s and met with Meghan while working as a press relations director for Ralph Lauren.

She was seen chatting with Meghan at Wimbeldon just days before her blind date with Prince Harry in July 2016, prompting speculation that she had set the couple up.

However, it’s since been revealed that the royal matchmaker was designer Misha Nonoo. 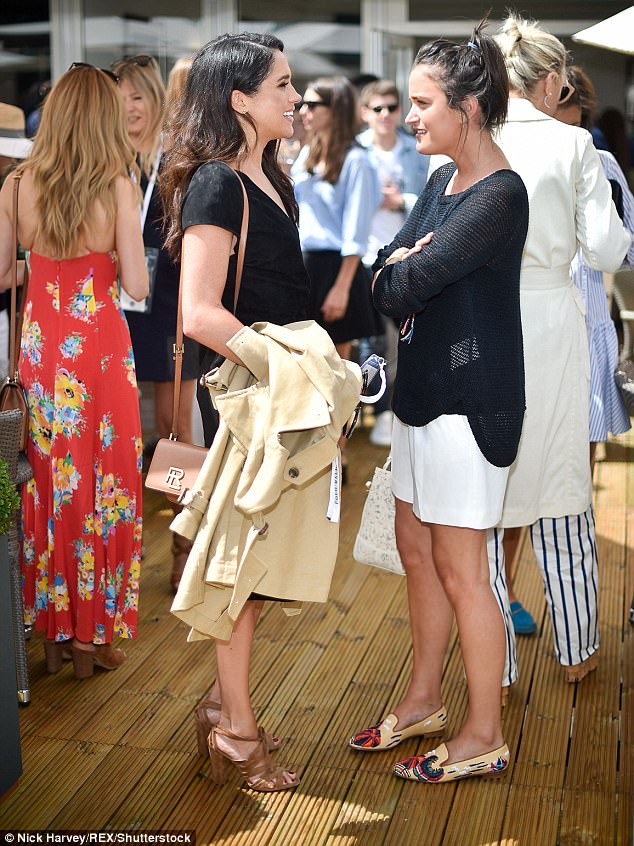 Chums: Violet met Meghan through her PR job at Ralph Lauren (pictured at The Polo Ralph Lauren VIP Suite at the 2016 Wimbledon Championships)

Meghan’s close friend Heather Dorak was not at her baby shower – presumably because she had given birth to her own child only days earlier.

The duchess developed a close friendship with Heather during the time she spent attending her Pilates classes when she was an actress in LA.

Meghan has often gushed about being inspired by Heather who was a guest at her wedding to Harry. 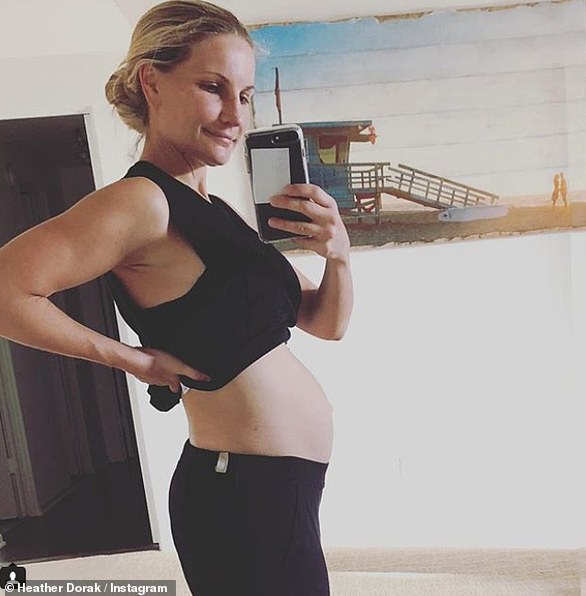 Mark Dyer has been noted as a ‘second father’ to Prince Harry throughout his upbringing and a mentor alongside the royal’s former nanny Tiggy Legge-Bourke.

Cheltenham ­College educated Dyer, known as Marko to friends, became a steadying big brother figure to the princes in the mid-Nineties when he worked as an equerry to the Prince of Wales for 18 months.

Prince Charles appointed Dyer to keep an eye on his sons, and he was brought in as a male counterpart to former royal nanny Tiggy Legge-Bourke.

During the first half term after Diana’s death, when the boys would have been with their mother, Prince Charles was committed to a five day visit to Africa.

He took Harry along and while the Prince carried out engagements, Harry went off on safari in Botswana, organised by Mark.

From then on he was a key guiding figure as Harry and William tried to come to terms with the loss of their mother.

After his spell as an employee to the Prince ended he remained a mentor to Harry.

In 2009 Mark founded the management company MDM Bars and Pubs and runs two pubs The Sand’s End and The Brown Cow, in south-west London which both became haunts of Prince Harry.

Mark’s six-year-old son Jasper, who is Prince Harry’s godson, was chosen as a page boy for the Duke and Duchess of Sussex’s wedding. 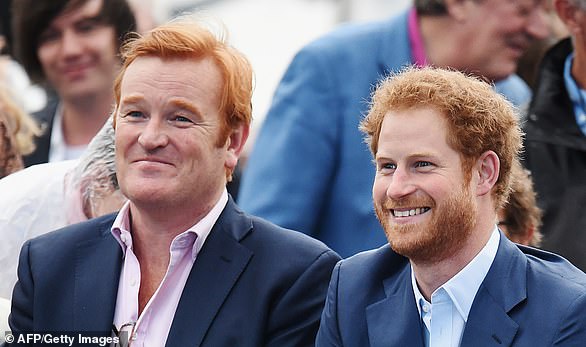 Harry has shared a close bond with his cousin Zara Tindall since childhood.

Back when Zara had a tongue piercing and Harry was known for his wild nights out, the pair were known as the ‘fun’ royal rebels.

However, their friendship has endured now they are both settled down and in their 30s.

Indeed, it’s Harry who is said to be responsible for Zara’s happy marriage to Mike Tindall after introducing the pair at Manly Wharf Hotel in Sydney in 2003, during the Rugby World Cup.

Zara and Mike chose Prince Harry to be godfather to their second daughter, Lena, the Duke and Duchess of Sussex attended her christening in March at St Nicholas Church in Cherington, Gloucestershire. 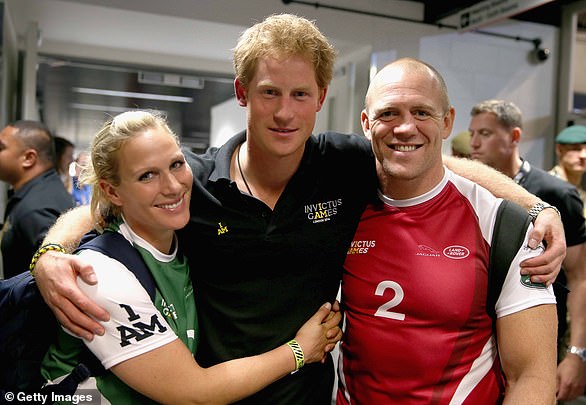 Harry is godfather to Lena Tindall, the younger daughter of his cousin Zara and Mike Tindall (pictured at the Copper Box)

Jake Warren and his wife Zoe attended the couple’s wedding, and their daughter Zalie – who is one of Prince Harry’s godchildren – was chosen to be a flower girl.

The godson of Princess Diana, Jake grew up alongside Prince Harry and has often been spotted with him at events including Ascot.

The Warren family are closely connected to the royals through horse-racing. Jake’s father John Warren is the Queen’s racing manager.

The father-and-son team run Highclere Stud in Newbury together. 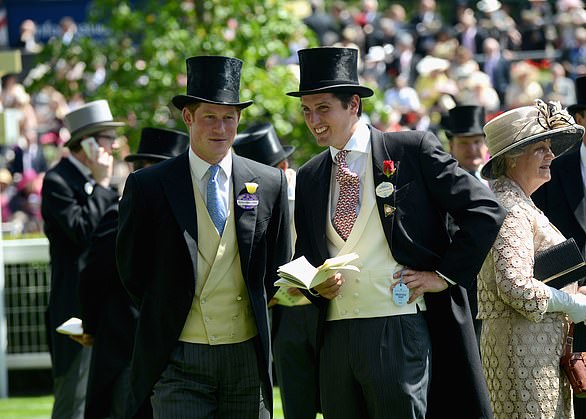 Jake Warren and his wife Zoe had their daughter Zali, who is one of Prince Harry’s godchildren, attended their wedding (Harry and Jake pictured together at Royal Ascot in 2014)

Major Nicholas van Cutsem, a major with the Household Cavalry’s Life Guards, has been a friend of Harry and William’s since childhood.

He had an important role in the 2011 wedding when he escorted William and Kate along the procession route in London in a 1902 State Landau after their wedding at Westminster Abbey.

The Duke of Sussex chose three-year-old Florence, the daughter of Nicholas and his wife Alice Van Cutsem, as a flower girl for his wedding to Meghan.

Prince Harry, who has known Nicholas and Alice for several years, is Florence’s godfather.

The Duke of Sussex chose three-year-old Florence, the daughter of Nicholas and Alice Van Cutsem (pictured in 2009), as a flower girl for his wedding to Meghan

A constant by the princes’ side while they were growing up, Tiggy has remained close to both the royals over the years, and met Meghan before they married.

The Duke of Sussex is godfather to Tiggy’s son Tom Pettifer, who was pictured with Tiggy at the royal wedding.

The Duke of Sussex is godfather to his former nanny’s son Tom Pettifer (pictured with Tiggy). His mother Tiggy Pettifer who was a personal assistant to Prince Harry throughout his childhood

Charlie Van Straubenzee became a close friend to Prince Harry and Prince William during their time at Ludgrove Prep School in Berkshire, and was chosen to be an usher at Harry’s wedding.

The Duke and Duchess of Sussex attended Charlie’s wedding in Surrey just months after their own ceremony.

The Windsors and van Straubenzees have known each other since they were at Prep school together and are close friends.

Harry has visited the family home in Cornwall almost every summer since he was a child. 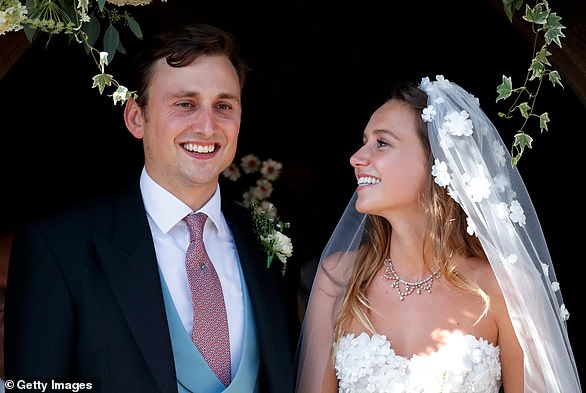 Tom attended Eton with Harry and co-owns a race horse with him called Usain Colt.

He later became known for being by Harry’s side whenever he got into scrapes, such as his infamous trip to Las Vegas in 2012, when the prince was photographed naked during a game of ‘strip billiards’.

But he’s been leading a more settled life since marrying flame-haired literary agent the Hon Lara Hughes-Young in Jamaica in 2017.

Harry and Meghan flew to Jamaica to attend Tom’s wedding, where the Prince was an usher.

Tom was a guest at the royal wedding in May 2018, and reportedly helped Prince William write a speech. 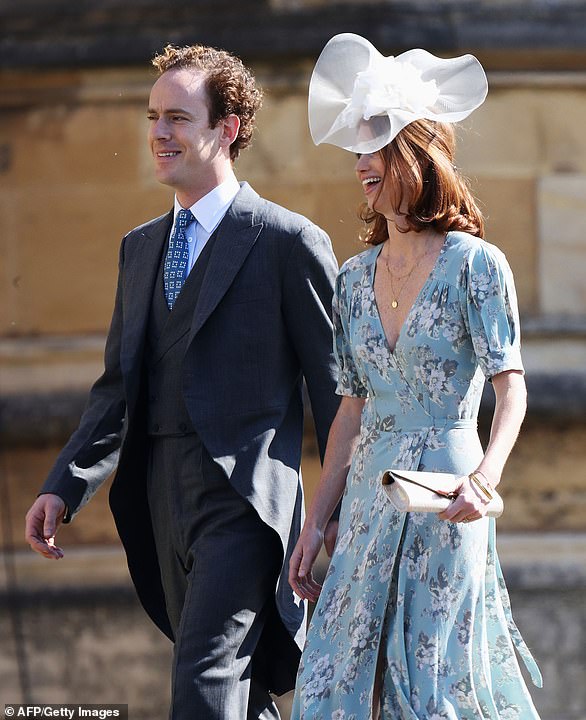