NEW ORLEANS (AP) – With a playoff berth at stake, the Saints found ways to capitalize on the mere presence of hobbled star receiver Michael Thomas.

New Orleans had been working on ways to exploit the attention opposing defenses pay to the sure-handed, 1,000-yard receiver, so Thomas figured he could still help the team despite his sore hamstring, which had left him officially listed as questionable for Sunday’s 23-13 victory over Atlanta.

“I had my hamstring issue, but all week I knew that was going to be a key play,” Thomas said. “That was one of the reasons I played, for situations like that.”

The play came to fruition in the last minute of the first half, a few plays after Marshon Lattimore’s unusual interception of Falcons quarterback Matt Ryan.

Ginn sprinted behind the Falcons’ cornerback Desmond Trufant and the Atlanta secondary couldn’t recover because safety Ricardo Allen had shaded toward Thomas to help cover him. Brees’ downfield throw hit Ginn in stride and he raced to the end zone for a 54-yard score that widened New Orleans’ lead to 13-0.

Now in his second NFL season, Thomas said he’d caught passes running the same rout he ran on Ginn’s touchdown – and out of virtually the same formation – during his three previous games against Atlanta, the most recent about two weeks ago.

Coach Sean Payton was hoping to plant a false sense of recognition in defensive backs’ minds, and it worked, Thomas said.

“He thought he saw it, but he really didn’t see it,” Thomas said of Allen. “He bit the cheese.”

Thomas was able to run well enough to make a few catches as well – four, in fact, for 66 yards.

Some other story lines from the Saints’ victory over the Falcons:

SELF DESTRUCTING: While the Falcons can still win a wild-card spot by beating Carolina in Week 17, they’ll have to clean up costly mistakes first .

Atlanta committed 10 penalties for 91 yards, went 2 of 13 on third downs, committed two turnovers and twice came away without points from inside the Saints 2-yard line – once on Devonta Freeman’s fumble and once on Freeman’s stuffed fourth-and-goal run. Even Lattimore’s interception came on a pass Marvin Hall could have caught, although it was high. Instead, the tipped ball landed on Lattimore’s backside as he lay face down, and he was able to reach back and grab it.

“I don’t know that it’s lack of poise or whatever, but whatever the reason for the penalties, we’ve got to figure that out,” Ryan said. “When you come into an environment like this and you’re playing a very good opponent, it’s critical to stay in front of the chains. You can’t make mistakes. We made too many.”

The Saints expect big plays from former first-round pick Cameron Jordan and got them with his two sacks. But there were several less-heralded and less-experienced players who came through.

HOME WRECKER: Falcons’ linebacker Deion Jones, who grew up in New Orleans, continues to have uncanny success against his hometown team. The second-year pro out of LSU intercepted Brees for the third time in four career games against New Orleans’ all-time leading QB and former Super Bowl MVP (when Jones was in 10th grade). The first two interceptions were crucial in Falcons wins. His latest, coming off a deflection, involved a little more luck. Still, he returned it 41 yards to the Saints 2 and it might have changed the game if not for Freeman’s ensuing fumble.

“I always want to beat them. It’s like a rival for me,” Jones said of the Saints. “I’ve got family that’s still kind of Saints fans and I just want to prove them wrong.”

BETTER BACKFIELD: Saints rookie running back Alvin Kamara missed most of these teams’ previous meeting Dec. 7 because of a concussion on the opening series. He was back and hoping to tip the balance.

Kamara accounted for 90 yards from scrimmage on 12 rushes and seven receptions.

“It felt like revenge,” Kamara said. “It felt good.”

Kamara’s availability lighted the load on Mark Ingram, who broke free in the third quarter for a 26-yard TD .

Kamara and Ingram now each have 12 TDs and more than 1,400 yards from scrimmage. 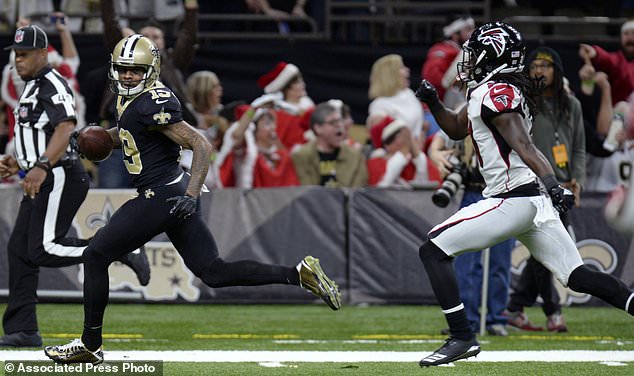 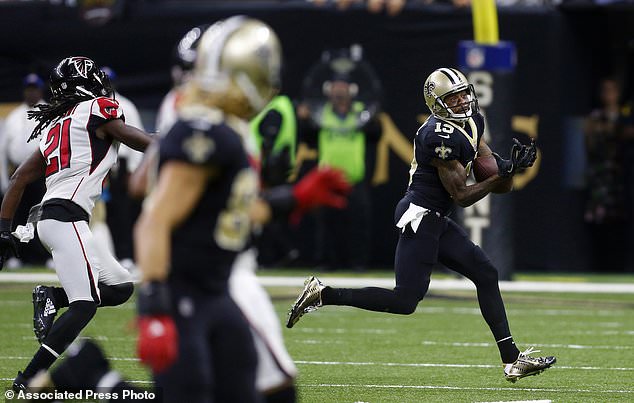 Atlanta Falcons wide receiver Andre Roberts (19) pulls in a touchdown reception in the first half of an NFL football game against the Atlanta Falcons in New Orleans, Sunday, Dec. 24, 2017. (AP Photo/Butch Dill) 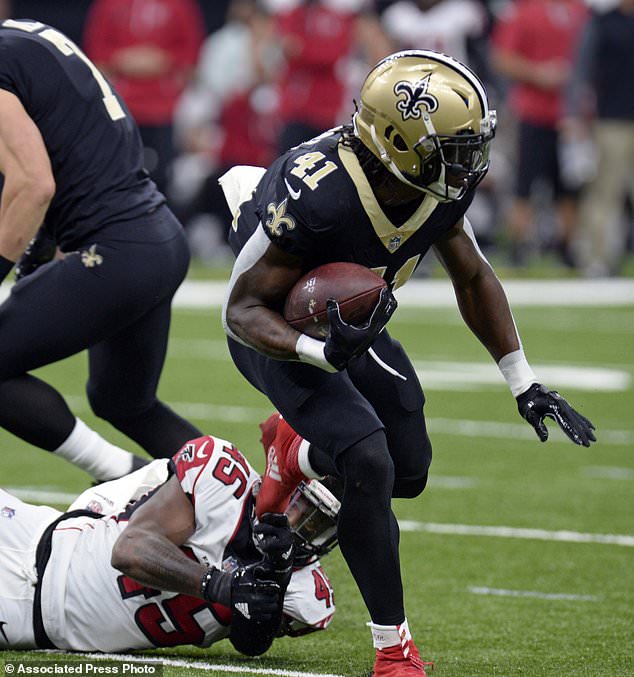