Thousands of inked-up body art fans descended on Sydney for the Rites of Passage tattoo festival on the weekend.

More than 250 tattoo artists around the world gave attendees new ink in hundreds of booths where businesses also sold other tattoo-related products.

The 10,000 patrons also watched 14 tattoo competitions over October 27-29, while nine women competed in the Miss Rites of Passage contest.

The event has been held in Melbourne for the past five years and added a Sydney leg for the first time this year, taking over the Royal Hall of Industries in Moore Park.

Organisers said the event was built on the core value of family, and allowing people to be themselves.

‘Forget all ego and self-righteousness, and bring it back to what the meaning of ‘tattooing’ means for each and every one of us,’ they said.

‘It is an opportunity to share our own story, to wear our journey with pride and to connect to all like-minded people about an art form that has evolved long since the times of outlaw sailors.

‘Tattoos are recognised around the world and they are here to stay (well, one would hope so, otherwise you got ripped off).’

One of 250 artists at the Rites of Passage tattoo festival in Sydney on Sunday works on a customer, and has significant ink of his own including on his eyeballs 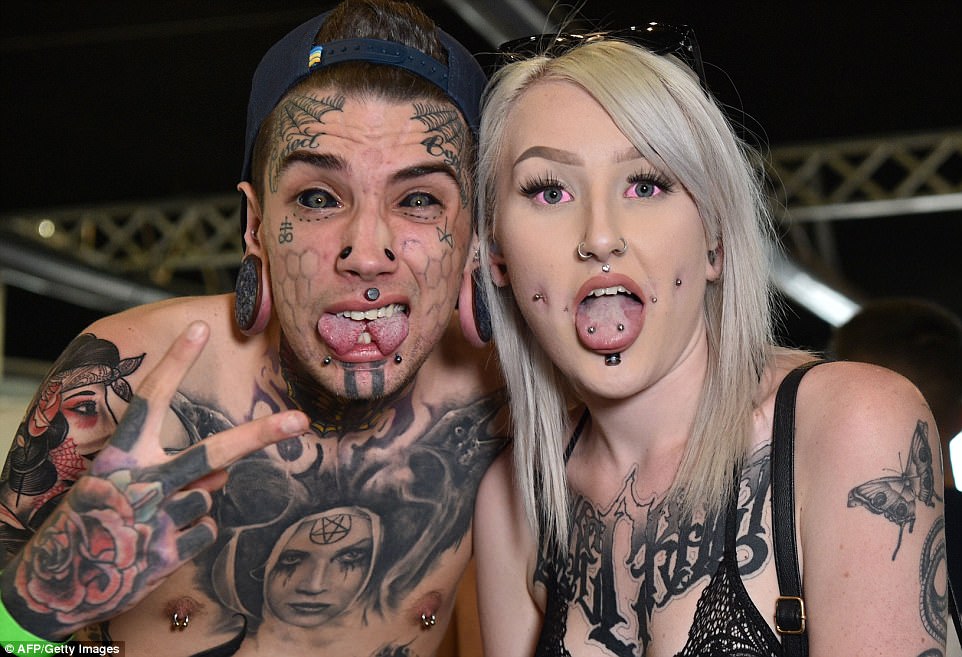 A couple show off their body art including tattooed eyeballs, numerous piercings, and a forked tongue 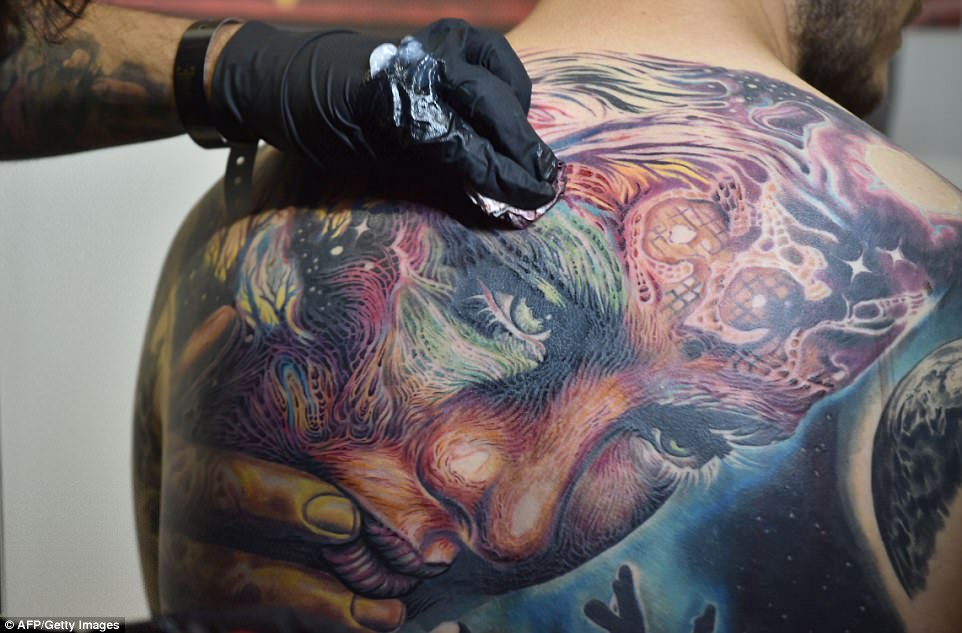 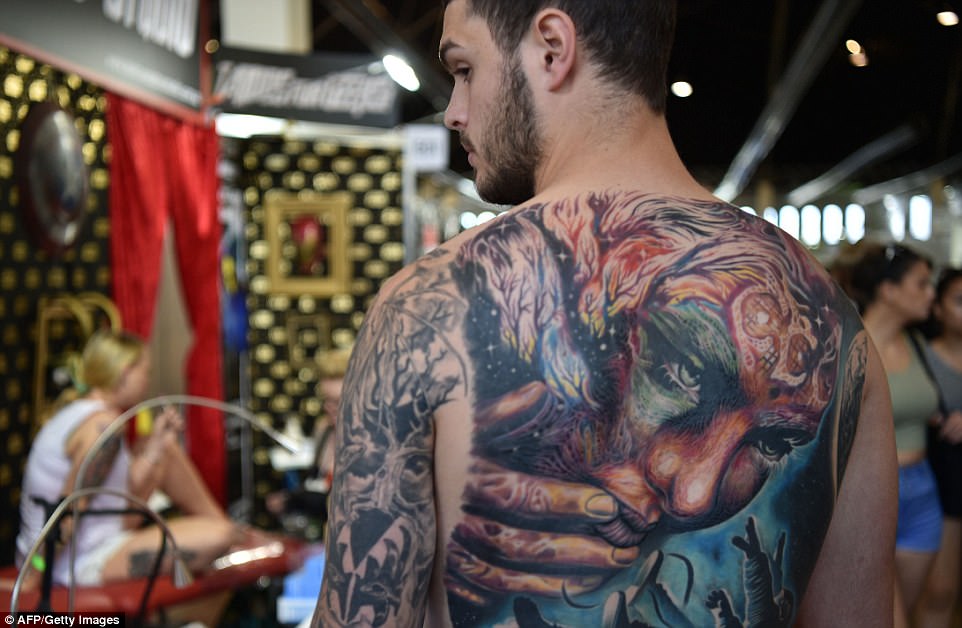 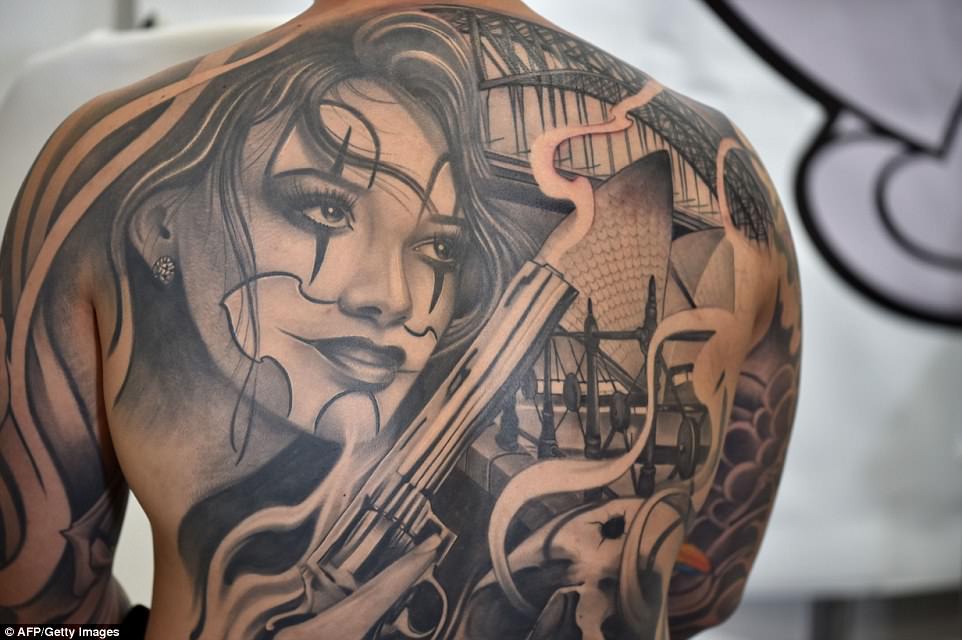 This back tattoo features and woman, a smoking revolver, and a view of the Sydney Harbour Bridge and Opera House 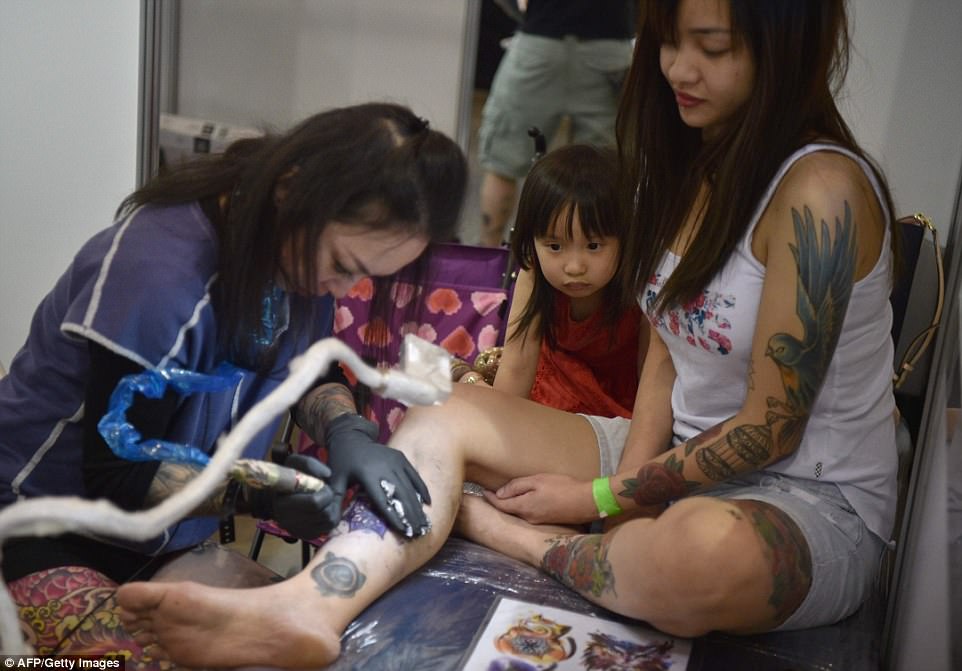 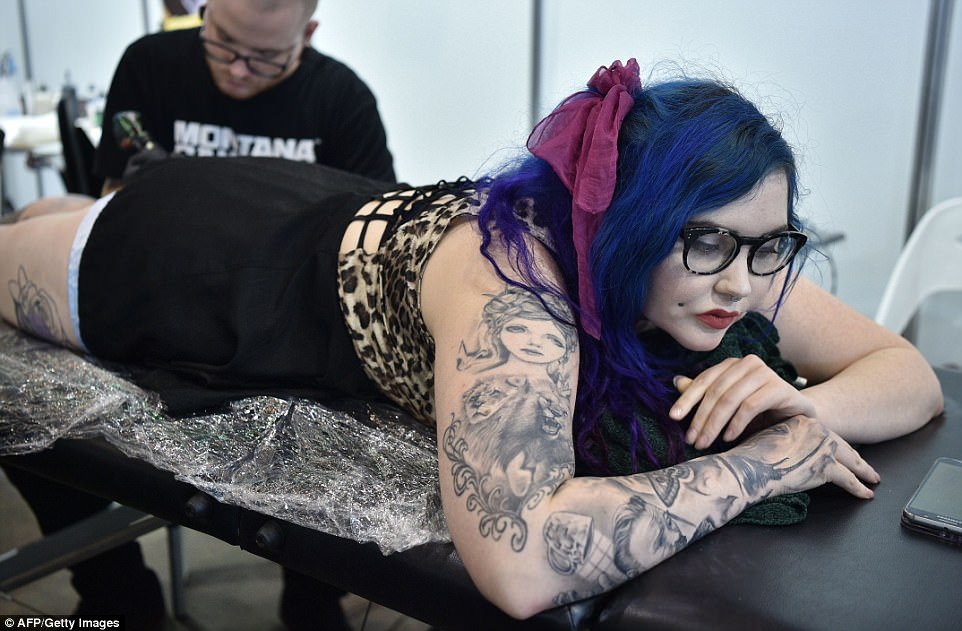 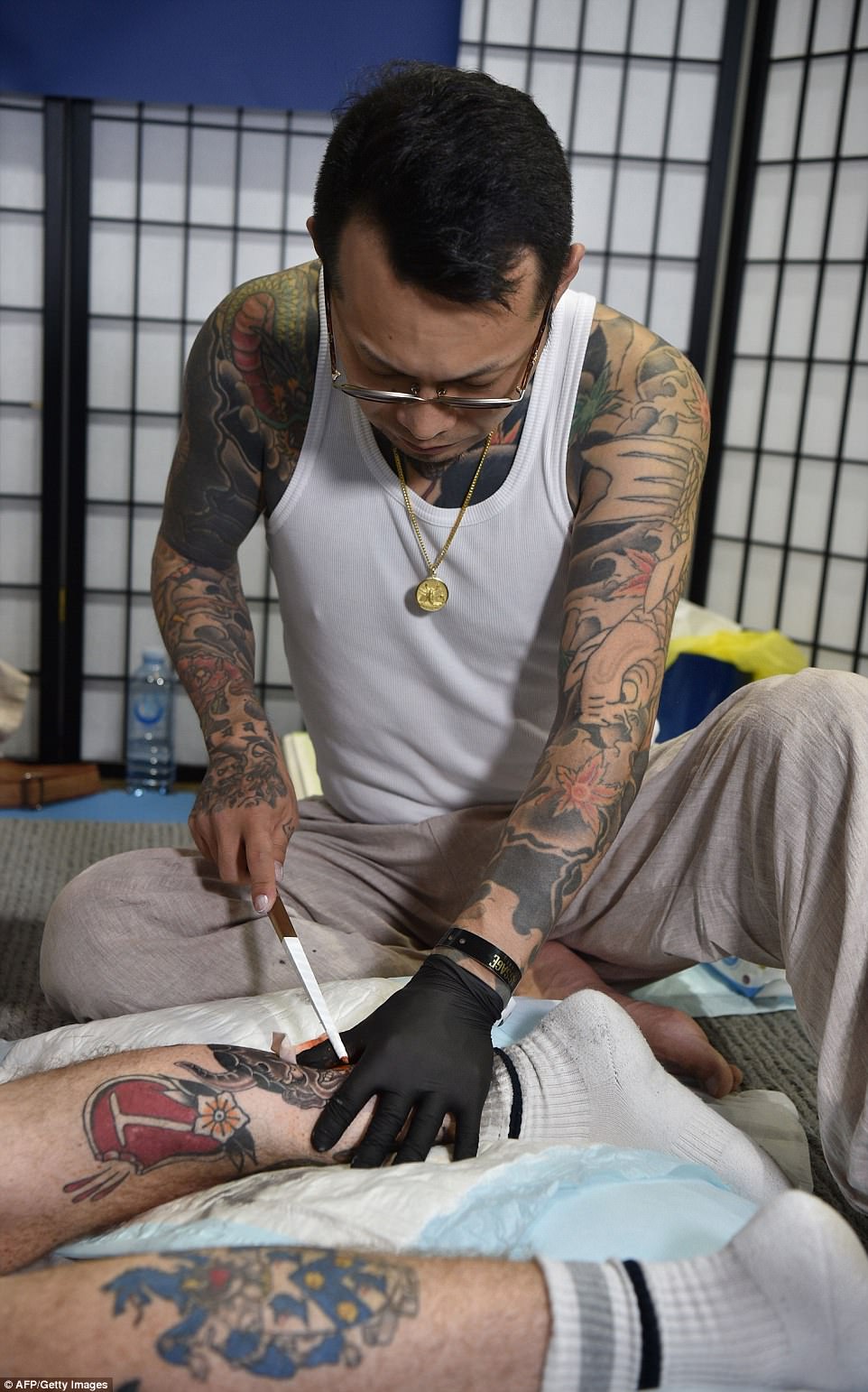 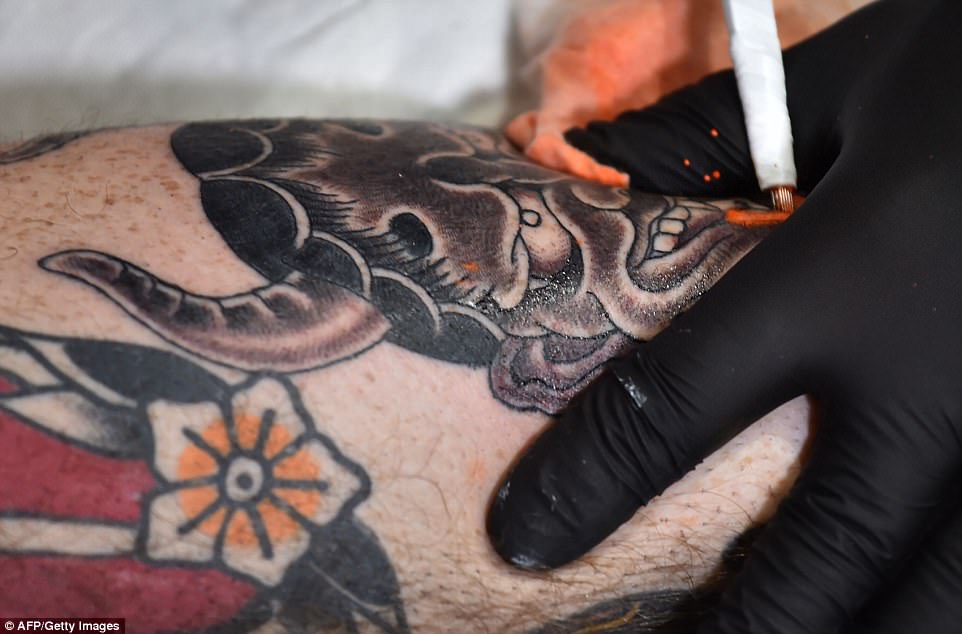 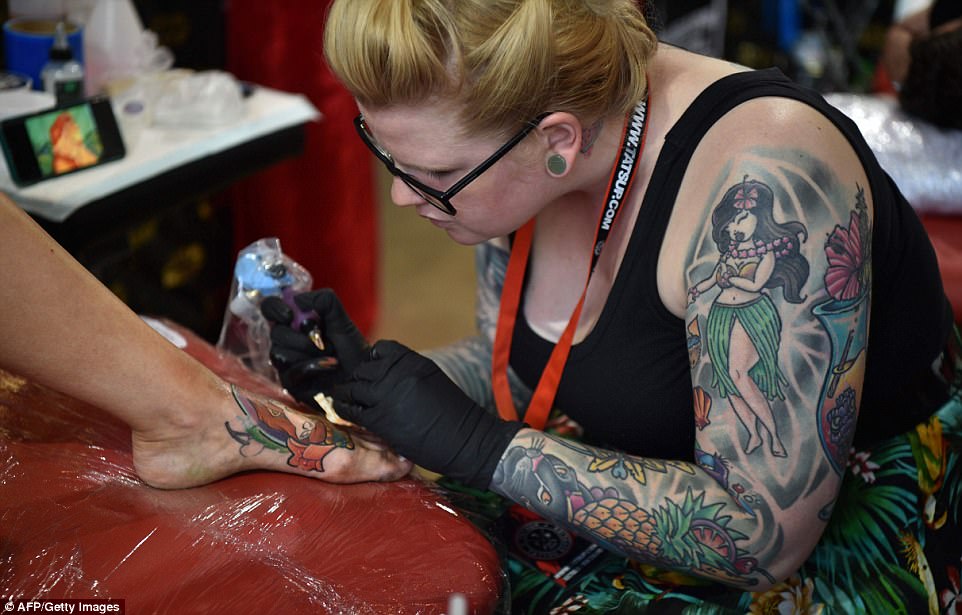 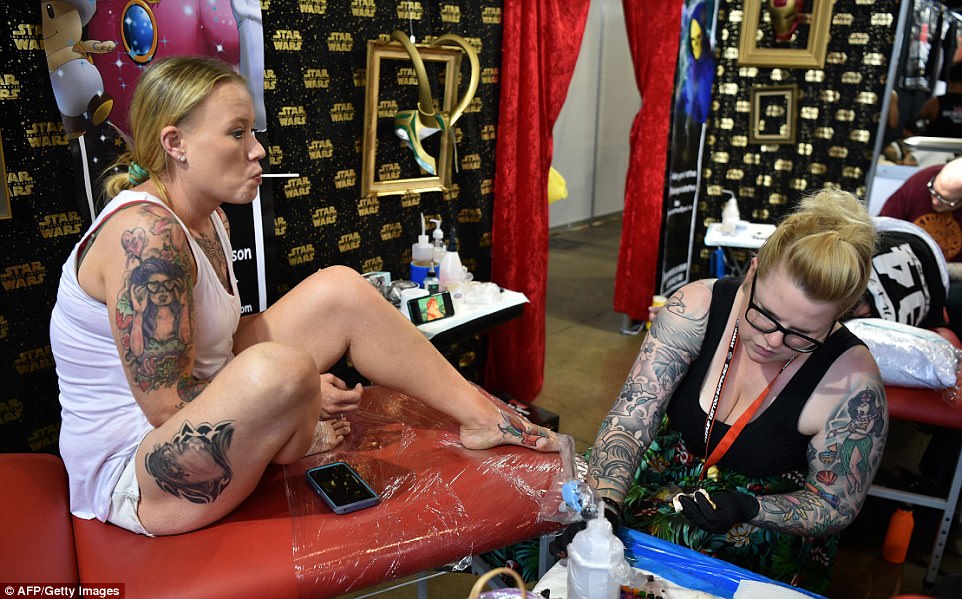 The customer is one of 10,000 who headed for the Royal Hall of Industries in Moore Park for the three-day festival on October 27-29 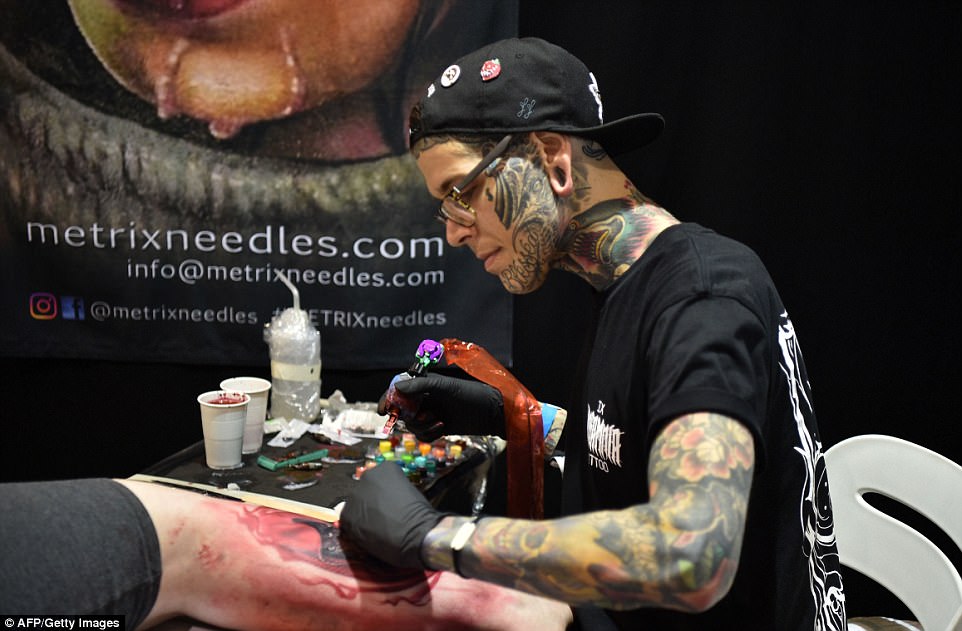 Another artist who has tattoos across his arms, neck and face works on another design 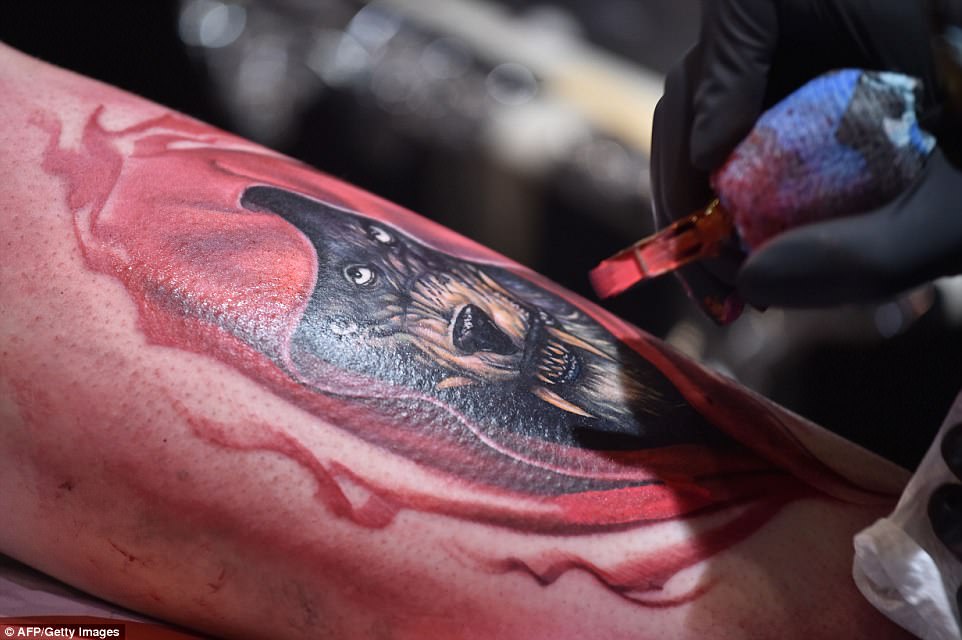 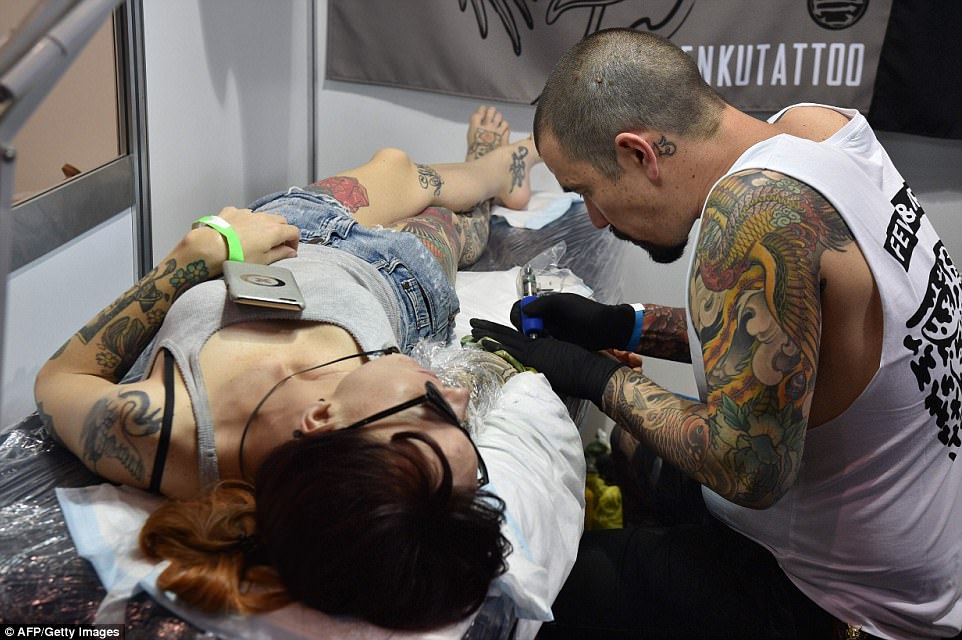 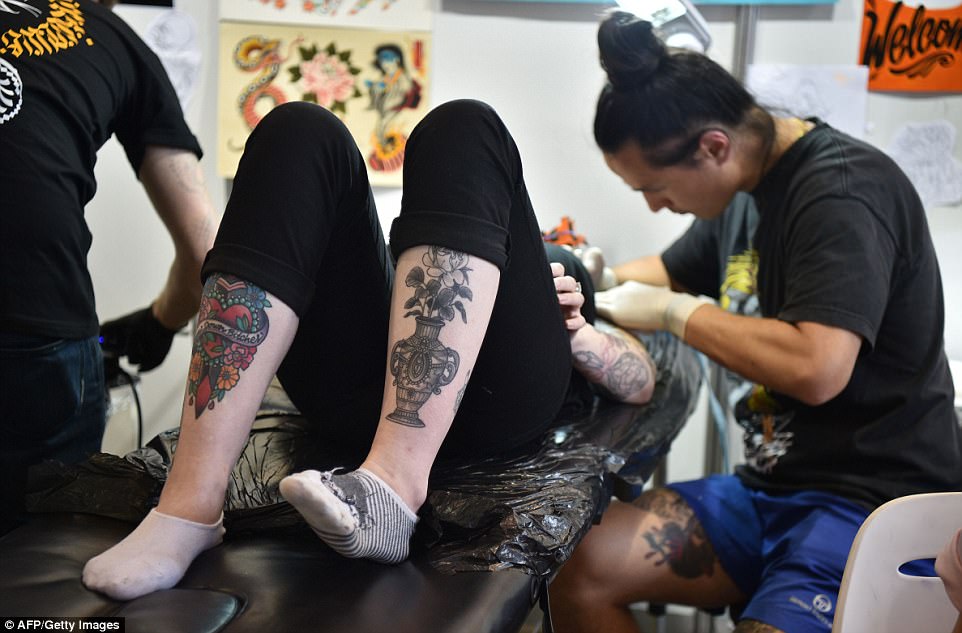 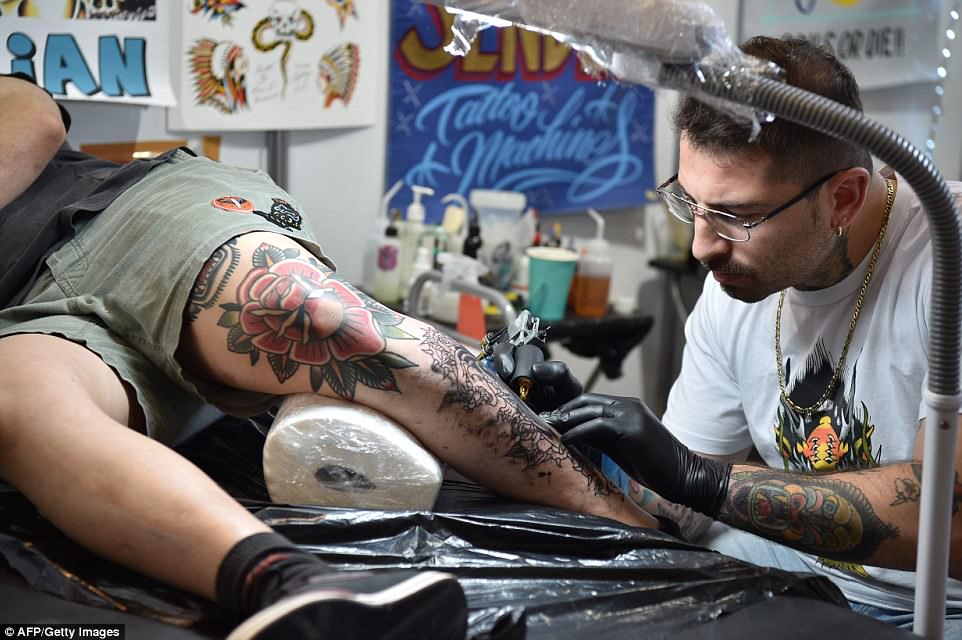 Organisers said the event was built on the core value of family, and allowing people to be themselves 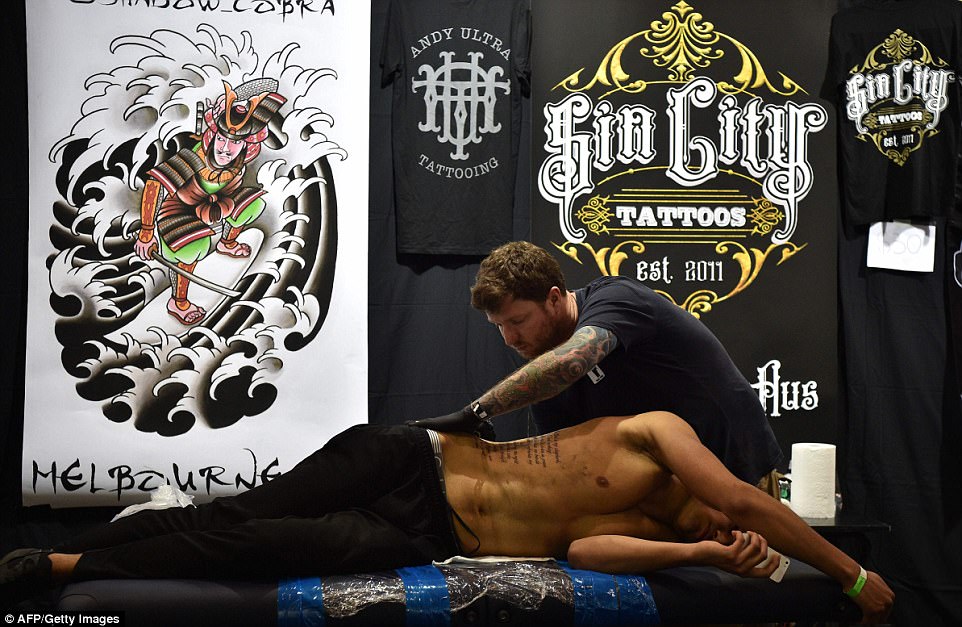 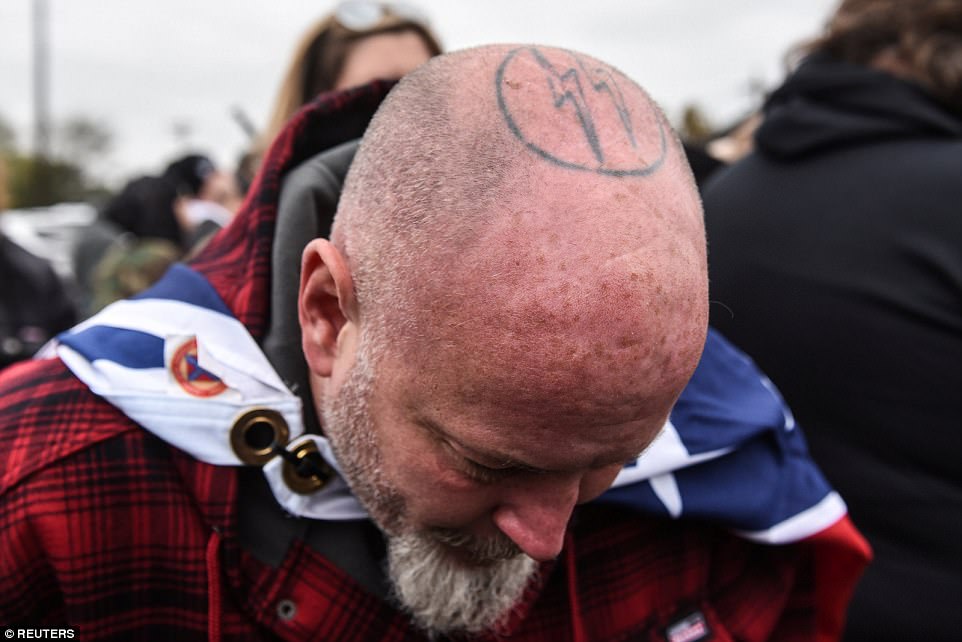 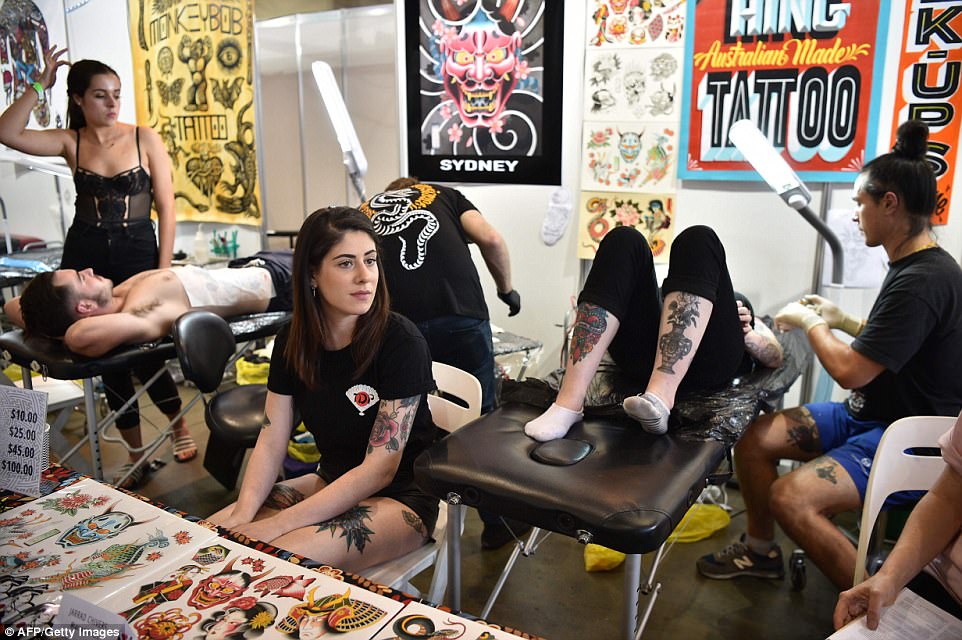 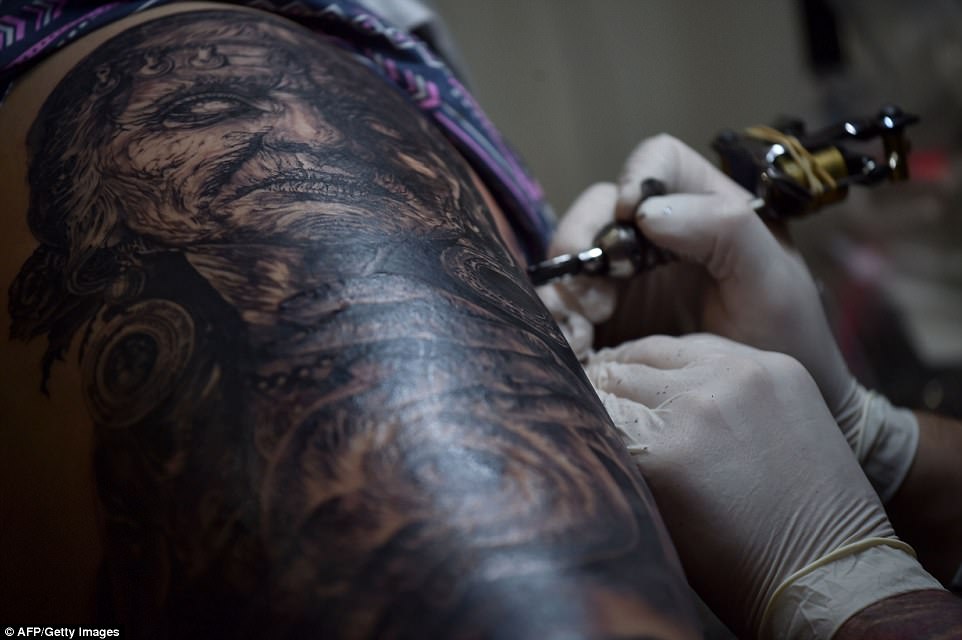