By Carol Davis For The Mail On Sunday

A tiny titanium ‘clothes peg’ could save thousands of Britons with a common heart condition from an early grave.

The implant – the size of a 2p coin – is now available to NHS patients suffering from heart valve disease, in which the valves that control the flow of blood through the heart function poorly and may leak.

The operation is minimally invasive, slashing the time required in theatre from 12 hours to just three, so it is suitable even for those unfit for open-heart surgery.

About 1.5 million Britons over 65 have heart valve disease and this number is set to double by 2046. Most commonly, patients experience problems with the mitral valve that supplies blood to the heat’s main pumping chamber.

Provided that patients are otherwise in good health, they can undergo surgery to repair a leak. But many are not fit for the operation, so their health deteriorates rapidly. Studies show that about half of patients with severe mitral valve disease who are too sick to undergo valve repair surgery will die within two years.

The new Mitraclip implant works by ‘clipping’ the two flaps of the mitral valve back together, stabilising it and improving blood flow to and from the heart. NHS watchdogs have now recommended Mitraclip for all appropriate patients following the results of a major US trial.

The study found it halved the number of patients admitted to hospital for heart problems, as well as the number of deaths two years after treatment.

The mitral valve lies between the left atrium and the left ventricle – the main pumping chamber of the heart – and assures passage of oxygen-rich blood in the right direction.

The valve has two flaps that open as blood is pushed through them. They then close, stopping the blood flowing backwards.

However, when the valve becomes damaged, oxygenated blood can start slipping back into the atrium instead of being pumped around the body. Complications include exhaustion, breathlessness and an increased risk of heart failure.

Such issues can be caused by genetic heart defects or damage following a heart attack.

While lifestyle changes can reduce the pressure on the heart, about 5,000 patients need surgery to repair the valve each year.

This usually involves a 12-hour invasive operation, which carries a risk of death for those with severe heart disease.

But now doctors can implant Mitraclip within three hours under a general anaesthetic, with patients able to return home the same day.

First, a small cut is made in the thigh to access a vein, through which a catheter is fed. This is threaded up to reach the right atrium of the heart.

A second tube with an attached needle is then pushed through the catheter. The needle punctures the membrane that separates the left and right chambers of the heart in order to access the mitral valve.

Next, the Mitraclip – attached to a wire – is threaded through the catheter and into the mitral valve. The clip holds the central part of the two flaps of the valve together, restoring function. Oxygenated blood can now flow through the valve without leaking.

Ross Sevens, 79, a retired dental technician from Leeds, was one of the first patients to be implanted with a Mitraclip.

Tests confirmed a leaking mitral valve but, due to an existing lung condition, doctors ruled him unfit for open-heart surgery to repair it. Instead, he saw Dr Blackman and underwent the Mitraclip operation in January 2018.

‘Everything is so much easier,’ he says. ‘I can walk upstairs and to the corner shop without any breathlessness, and if I do have to pause I recover much faster. And I’ll be back on the golf course using a buggy once the weather warms up.’

Try this: with Mariam Al-Roubi

The bridge… for a pain-free lower back

If you are suffering with a bad back, there are a few gentle exercises you can do at home which can help recovery and prevent further episodes of pain. 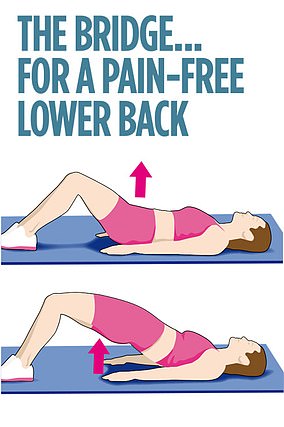 It is key to work the smaller muscles in the back, to which we often pay little attention. But these support both the bigger muscles and the neighbouring bones.

This week, I’ll focus on a lower-back exercise – and next week, the upper back.

1. Lie on your back with feet hip-width apart.

2. Engage the core and squeeze the buttock muscles, then lift the hips until the shoulder and knees are in line with each other.

4. Lower the hips to the floor and un-tense.