Thousands of men with advanced prostate cancer are expected to benefit from a radical radiotherapy treatment shown to extend life expectancy.

It uses radioactive molecules which act like a ‘guided missile’ to find and kill the cancer cells.

Results of the first major trial of the Lu-PSMA-617 therapy found it extends the life of men with advanced cancer by an average of four months. The findings were presented at the American Society of Clinical Oncology conference.

The radiotherapy targets a protein on the surface of the cancer cells called PSMA, blasting it with a radioactive isotope called Lutetium-177.

The trial involved 831 patients and was led by an international group including the Institute of Cancer Research in London.

Men who received the Lu-PSMA-617 therapy were found to be 38 per cent less likely to die than those receiving standard care over the 21-month trial follow-up period.

They also stayed healthier for longer, surviving on average for 8.7 months before their cancer got worse, compared with only 3.4 months for men on standard care. 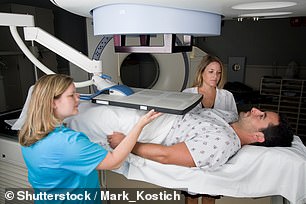 The ‘seek and destroy’ radiotherapy is the most promising development in prostate cancer for more than 15 years.

The therapy would initially be available for up to 5,000 men a year with advanced prostate cancer, when the cancer has spread to other parts of the body.

This could potentially help cure the cancer before it spreads, researchers hope.

Scientists are also trialling it on patients at an earlier stage of the disease, potentially opening it up to thousands more men.