George Osborne (pictured) was at the school in the 1980s. Other so-called Old Paulines who attended the school during the period under review include historian Dan Snow.

A Major inquiry is looking at allegations of child abuse dating back 60 years at one of Britain’s most famous private schools.

Investigators have written to thousands of old boys of St Paul’s – where alumni include ex-Chancellor George Osborne and TV veteran John Simpson – in the search for victims and witnesses.

The letters were sent out by officials at the Richmond Safeguarding Children Board in South-West London after it began a Serious Case Review into ‘what abuse children suffered’ at the school in Barnes.

It asked former pupils to come forward in person or by telephone. The ‘period under review’ is 1960 to the present day.

The £36,000-a-year school has been plagued by revelations of misconduct by staff in the past few years following a police investigation into abuse in the area called Operation Winthorpe.

Earlier this year former rowing coach Patrick Marshall became the fifth member of staff to be convicted for abuse since 2013 when he was jailed for 18 years for sexually abusing pupils.

Up until now, the only confirmed cases of child abuse at the school date from 1974 to 1992 and later incidents in 2003 to 2005. But the review aims to cover time outside these periods as The Mail on Sunday understands some allegations of abuse date back over 50 years.

Conducted by independent experts, Serious Case Reviews are often reserved for situations where children have died or been subjected to serious abuse and neglect and are intended to prevent future incidents occurring. It is uncommon for such a wide ranging review to take place. 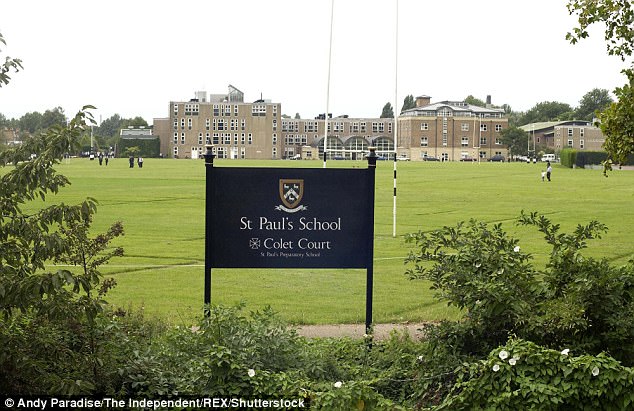 A spokesman for St Paul’s said: ‘The matters which came to light during Operation Winthorpe were deeply shocking and saddening’

Mr Osborne was at the school in the 1980s. Other so-called Old Paulines who attended the school during the period under review include historian Dan Snow.

A spokesman for St Paul’s said: ‘The matters which came to light during Operation Winthorpe were deeply shocking and saddening.

‘They represented serious violations of trust and the values which the school holds dear.

‘The school is fully supportive of the Serious Case Review into inter-agency working, following the formal closure of the police investigation. Our first and foremost priority is to keep children safe, and to establish and disseminate the wider lessons to be learned, and welcome the opportunity to contribute to the review.’

Deborah Lightfoot, independent chairman of Richmond’s Local Safeguarding Children Board, said: ‘Over the past few years, there have been a number of police investigations and subsequent prosecutions regarding historic abuse allegations at St Paul’s.

‘The Local Safeguarding Children Board has therefore decided to conduct a full Serious Case Review. This will involve reviewing procedures, documentation and carrying out interviews with the school and other local partner organisations to consider whether there are any lessons to be learned and to ensure that all children and young people are safe from harm in the future.

‘It is expected that the review will take approximately 12 months. A report with findings and recommendations will be published at the end. The school is co-operating fully with the review.’