TSB is in the midst of another banking meltdown today with salaries failing to make it into thousands of accounts on pay day in a week where it was already humiliated for an IT failure that hit 2million customers in 2018.

The high street lender has been forced to offer people emergency cash after payments into customer accounts failed to materialise.

TSB said a ‘small number’ of customers – believed to be in the thousands – failed to receive salaries and cheques and they have been told that the cash should show up in accounts by this afternoon.

Customers needing emergency cash can contact the bank, by going into branches or over the phone.

This week bosses were lambasted and accused of lacking basic common sense in a damning report on an IT meltdown that left two million customers locked out of their accounts last year.

People with missing payments today have said they will now leave TSB – and some claimed that instead of being offered emergency cash they were urged to ‘borrow’ from family and friends to pay their bills.

A TSB spokesman said: ‘Some payments into TSB accounts have been delayed overnight and we are working to process these as soon as possible today.

‘We apologise for the inconvenience this has caused and will ensure customers are not left out of pocket.

‘If TSB customers need emergency cash or have any questions they can visit us in branch or contact us via the number on the back of their card.

‘Customers can still use their cards to make payments or withdraw cash.’

This week a much-anticipated multi-million pound report from City law firm Slaughter and May was published and said TSB rushed its transition to a new technology platform and failed to test the system properly. 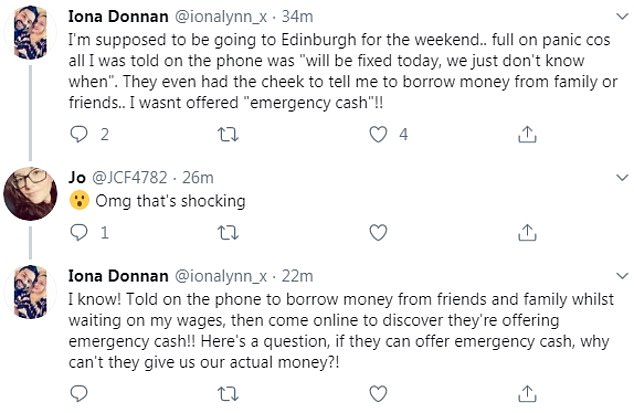 In extraordinary scenes chairman Richard Meddings was accused of the issuing a ‘hollow’ apology because he refused to accept all the findings in a report they had asked for. 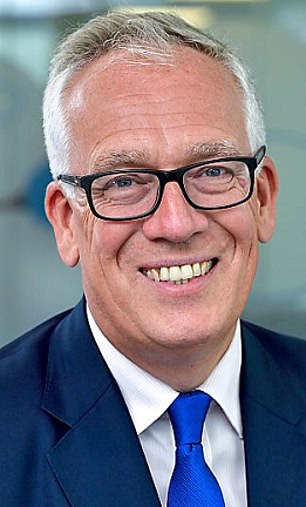 Slaughter and May said the updated online banking platform went live on 22 April 2018, chaos descended on TSB and its five million customers.

Mr Meddings said said the report did not ‘paint the full picture’.

Around two million were shut out of their bank account for weeks, and on the first day were forced to wait an average of 90 minutes to speak to an adviser on the phone.

Several services were also unavailable in branches as the bank was rocked to its core, and some account-holders claimed to be able to access other customers’ details.

By the second week, TSB – which is owned by Spain’s Banco Sabadell – had received more than 33,000 complaints and opportunistic fraudsters began targeting confused customers.

Slaughter and May’s report has now slammed the bank’s actions in the years leading up to the technology switch, and criticised the communication between its board and the executives who led the programme.

There were still more than 2,000 defects with the system when it went live, but the board – first led by Will Samuel and then Richard Meddings from February 2018 – were only told about 800 of these.

On top of that, Slaughter and May added, the board asked a number of questions about the plan to update IT systems but ‘there were certain additional, common sense challenges that we might have expected the TSB board to raise with the executive’.

These included how the switching programme was set to meet its tight deadline when some parts of its were seven months behind, whether the reasons for the delays had been addressed, and what evidence there was to suggest that the testing of the new IT platform would pick up pace.

Mr Meddings has refuted many of the report’s findings, claiming that the catastrophic failure was down to the design of two data centres. 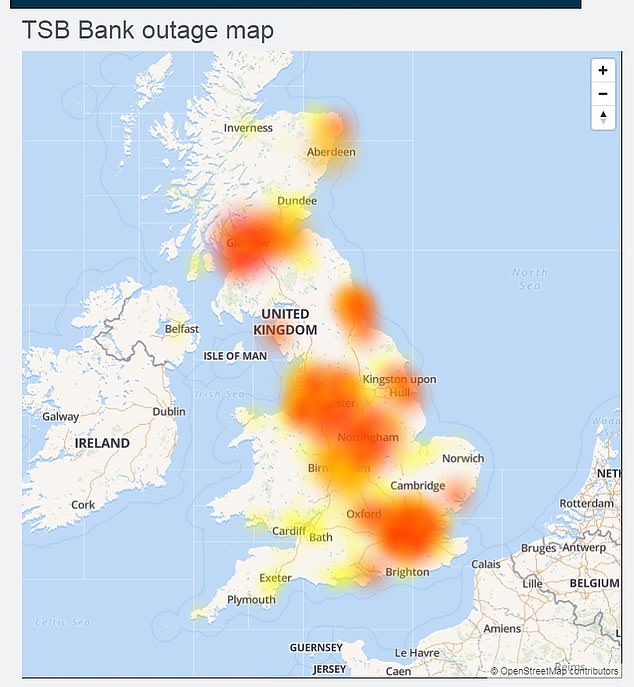 These should have been identical, but in fact were not. This was never discovered in testing, Slaughter and May’s report found, because only one of the data centres was actually put through a trial run before the launch.

Mr Meddings said: ‘There are areas where we disagree [with Slaughter and May].’ He claimed that the law firm outlined a number of potential problems, but gave no weight as to which ones had actually caused the meltdown.

When questioned on whether there had been a communication breakdown between the board and other staff, Mr Meddings added: ‘I don’t think that’s wholly fair. It was a very complex programme and actually there was a very good framework around it.

‘I think the thing that we missed, that was the primary cause of the issues, was inconsistent configuration of the two data centres.’ The scandal cost TSB around 80,000 customers who switched to another bank, and around £366million to cover the fall-out.

Approximately £130million of this went towards compensating customers, while the 260-page Slaughter and May review cost £21million.

The law firm suggested that TSB’s plans to update its technology had been doomed from the start.

As soon as Sabadell bought the bank in 2015 for £1.7billion, it declared the new platform would go live in November 2017.

Slaughter and May called this timetable ‘ambitious and unrealistic’, even after it was pushed back to the first quarter of 2018.

Testing of the new system’s functions took 17 months, much longer than anticipated, and problems were thrown up faster than the bank’s technology experts could fix them.

Later testing, designed to check whether the platform could cope with TSB’s customer numbers, was squeezed into a much shorter timespan than hoped.

Chief executive Paul Pester was forced out of the bank five months later following a disastrous appearance in front of the Treasury Select Committee.

But in a statement, he insisted that he had been kept in the dark about much of the testing and tried to shift the blame back onto Sabadell’s technology arm Sabis.

He said: ‘If these findings are right, Sabis rolled the dice by running tests on only one of TSB’s two new data centres and this decision was kept from me and the rest of the TSB board.

‘The report explains that this made it impossible for the TSB board to anticipate the serious problems experienced by many customers who could not access their accounts.’ TSB is now attempting to rebuild its reputation under the leadership of chief executive Debbie Crosby.

But City watchdog the Financial Conduct Authority and the Bank of England’s regulator are both still investigating the lender.

The crisis erupted after TSB attempted to shift its technology systems from those run by Lloyds Bank, its former owner, to a new platform created by Sabadell.

TSB had originally been planning to use Lloyds’ systems until 2024, but the fee it was paying to Lloyds was set to be ramped up from 2017.