A small fashion label has caused a stir on TikTok by promoting a revealing dress deemed to be the ‘perfect’ outfit to wear at a funeral.

British brand ‘EdgyLittlePieces’ posted a TikTok video of a woman promoting the dress, but the attire was quickly slammed as ‘inappropriate’ and ‘disgusting’ by appalled viewers.

‘So many people have been asking me for funeral fits,’ the woman said while wearing the skimpy outfit, adding: ‘Look no further, we think [the dress] is actually perfect.’ 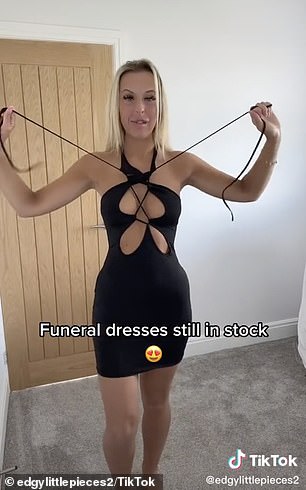 TikTokers have slammed a small clothing label over an ‘inappropriate’ funeral dress. In a video a young woman says the revealing black attire is ‘perfect’ for funerals

The tight black dress features a front crisscross design showing off the woman’s cleavage and figure.

The outfit looks like what a woman would wear to a nightclub and never to a funeral.

The shocking design left hundreds speechless with many sharing exactly what they thought in the comments.

‘Are you joking??’ one person wrote, another blatantly shut her down and said: ‘Girl no just no.’

One man said: ‘Are you mad? As a funeral service operator you would be judged. How dare you go dressed up like some street walker to a funeral.’

In a second video the woman demonstrated how the dress can be tightened using the front shoelace straps.

‘You can tighten it up to make it super modest for the funeral, then loosen it back down for the after party,’ she said.

Though not much changed and it still showed off some skin.

She also said the outfit is the brand’s ‘best seller’ and they needed to bring in more stock to keep up with demand.

Many on TikTok didn’t believe this and continued to criticise the small business for selling the dress.