Thousands take to streets of Pamplona to protest against rape verdicts

Tens of thousands of Spaniards took to the streets of Pamplona in the north of the country on Saturday to protest against the acquittal of five men accused of gang raping an 18-year-old woman at the city’s bull-running festival.

Demonstrators have filled streets across the country since the court ruling on Thursday, leading Spain’s conservative government to say it will consider changing rape laws.

The men were acquitted of sexual assault, which includes rape, and sentenced to nine years for the lesser offence of sexual abuse.

In Pamplona itself, police said that ‘between 32,000 and 35,000 people’ took part in a demonstration on Saturday, rallying under the slogan ‘it’s not sexual abuse, it’s rape’. 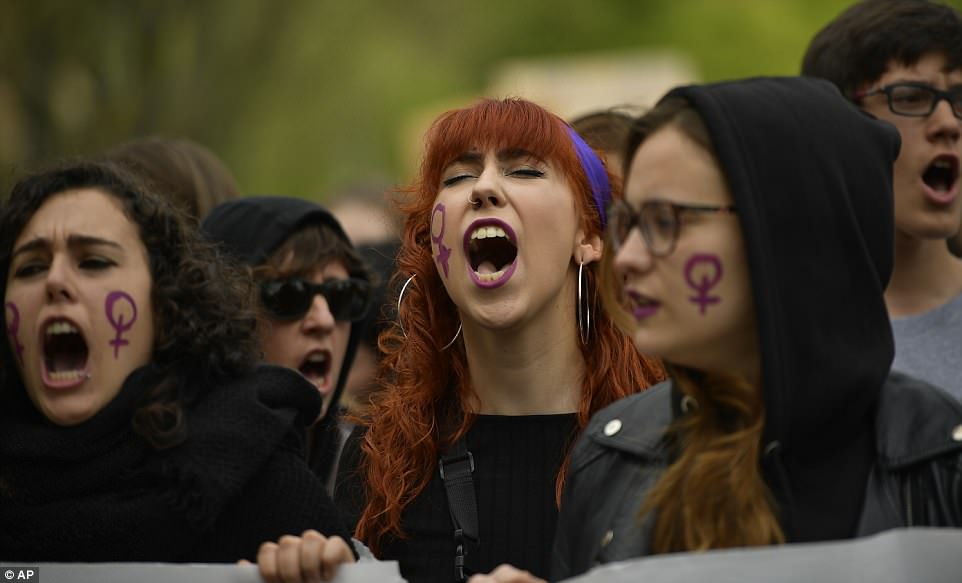 Women shout slogans and hold up a sign during a protest against sexual abuse in Pamplona, northern Spain, today 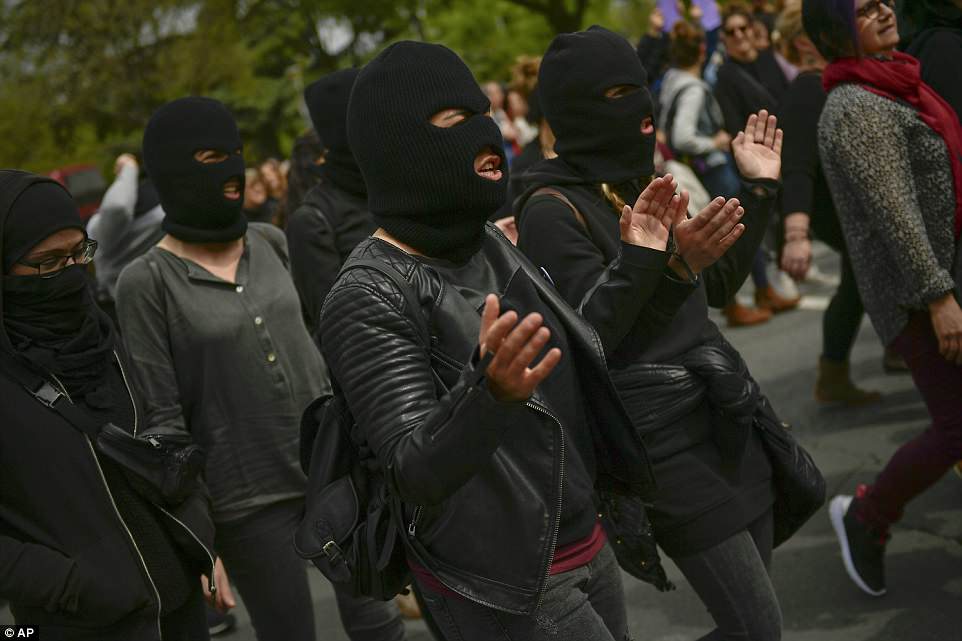 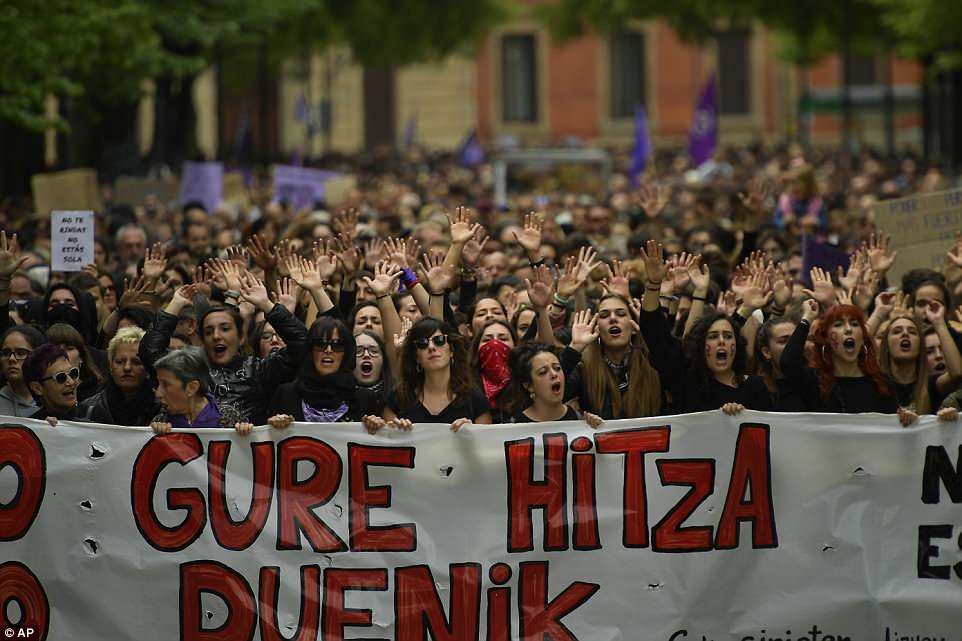 Women hold up a sign and raise their hands during the protest today. The sign reads ‘Our Word’ in the Basque language

The protest passed off without incident, a police spokesman said.

It marks the third day of protests.

Ana Botin, the influential head of Santander, one of Spain’s biggest banks, tweeted that the ruling was ‘a step back for women’s security’ while former judge Manuela Carmena, now Madrid mayor, said it ‘does not meet women’s demand for justice.’

The men, aged 27 to 29, had been accused of raping the woman at the entrance to an apartment building in Pamplona on July 7, 2016, at the start of the week-long San Fermin festival, which draws tens of thousands of visitors.

The five, all from the southern city of Seville, filmed the incident with their smartphones and then bragged about it on a WhatsApp messaging group where they referred to themselves as ‘La Manada’, or ‘The Pack’ in English.

An online petition calling for the disqualification of the judges who passed the sentence gathered more than 1.2 million signatures by Saturday.

The issue also hogged the headlines of newspapers all around the country and an order of Carmelite nuns added their voices to the wave of condemnation of the court judgement.

Under Spain’s criminal code, evidence of violence or intimidation must exist for the offence of rape to be proved. 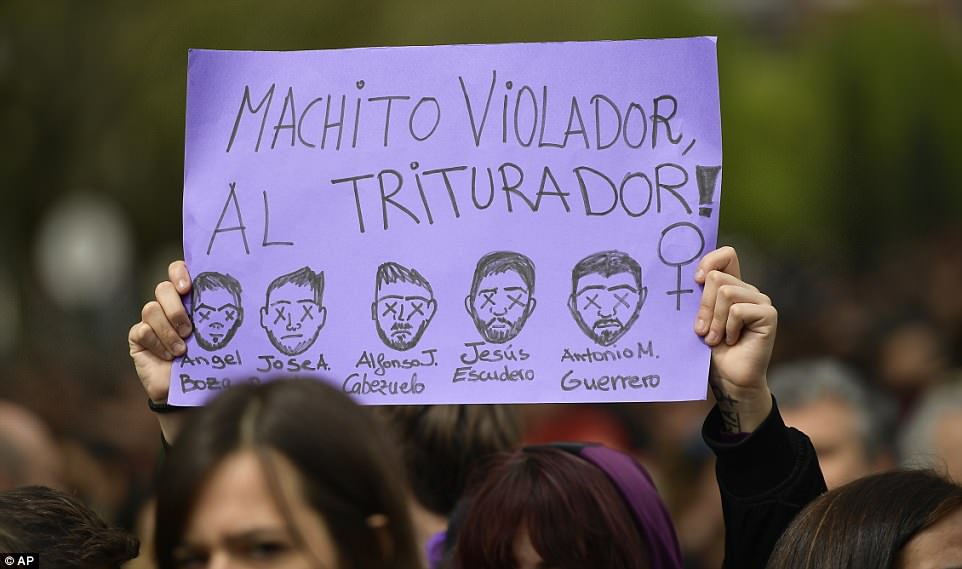 A protester holds up pictures of five men sentenced for sexual abuse. The sign reads: ‘Male violator to the crusher’ 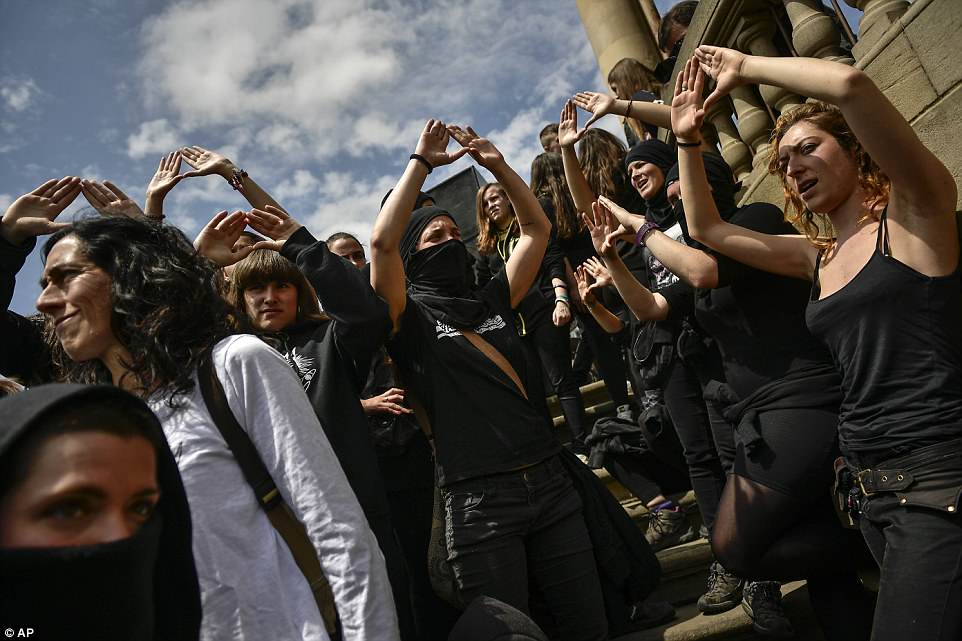 Protestors hold a banner that reads, in Basque: ‘There is no one to judge our word. It is not abuse, it is aggression’ 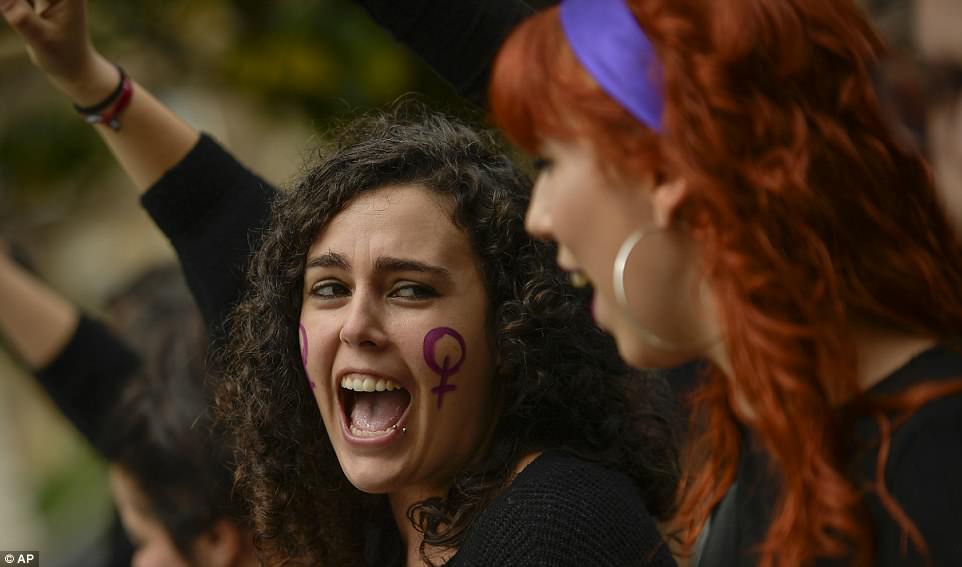 Women hold up their hands as they shout slogans during a protest in Pamplona, northern Spain 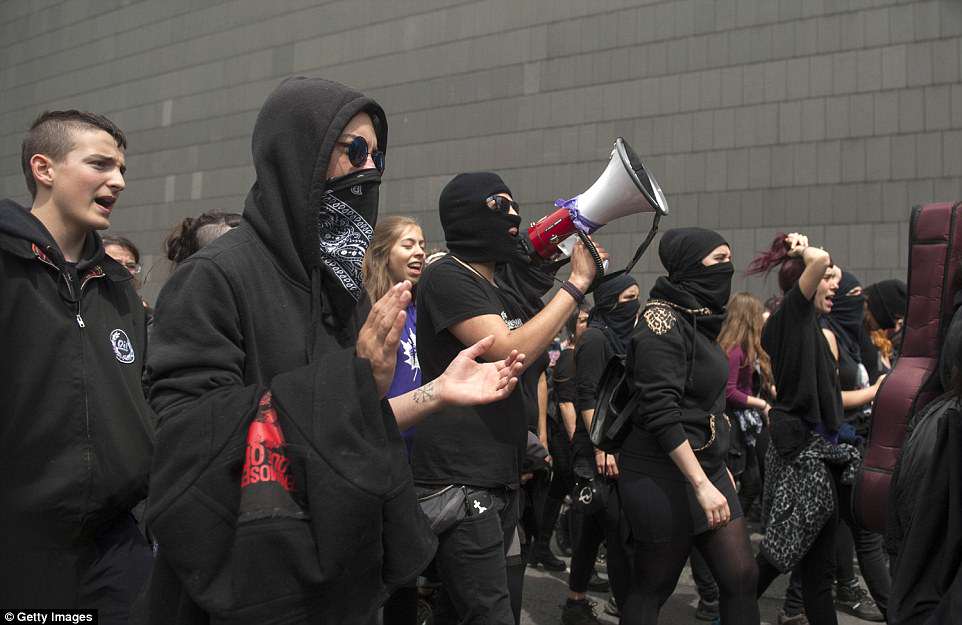 But that was a legal nuance that was ‘not always easy to establish,’ top-selling daily El Pais wrote in an editorial.

It ‘leads to the painful question of just how much a person needs to fight to avoid being raped without risking getting killed, and still get recognised as a victim of a serious attack against sexual freedom while ensuring that the perpetrators do not enjoy impunity,’ the newspaper said.

In their ruling, the judges said that ‘it is indisputable that the plaintiff suddenly found herself in a narrow and hidden place, surrounded by five older, thick-bodied males who left her overwhelmed and unresponsive.

‘The videos show the plaintiff surrounded and stuck against the wall by two of the accused… she has an absent grimace, and keeps her eyes closed,’ they added.

On Thursday, large crowds of mainly women had marched in cities across Spain, including Madrid and Barcelona, following the court sentencing. In the northern city of Santander protesters blocked roads, public television TVE reported.

Then on Friday, thousands of people demonstrated outside the Pamplona court where the judgement was made. 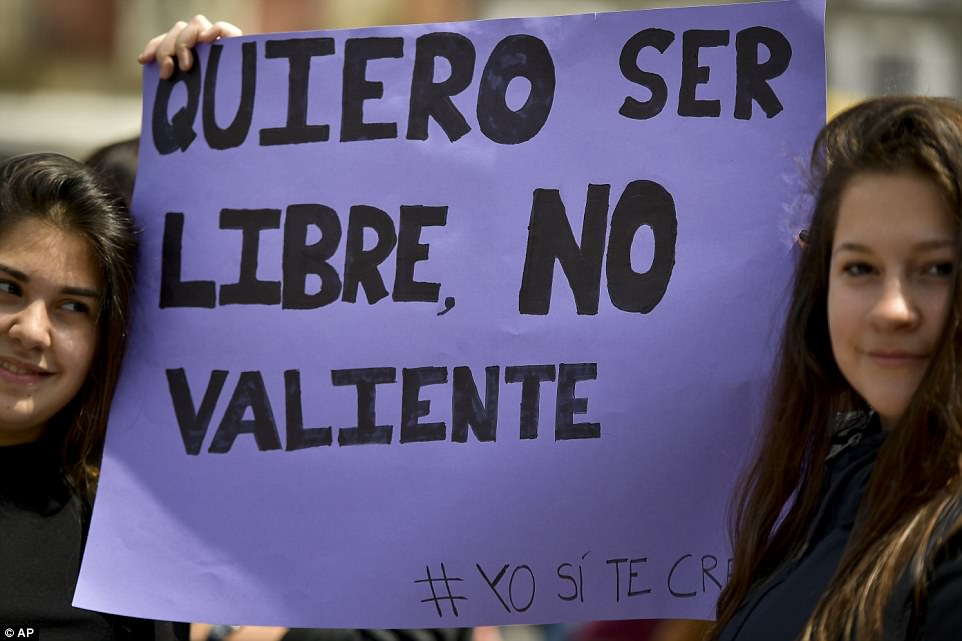 Women hold up sign reading ‘I want to be Free, no Brave’ during a protest against sexual abuse in Pamplona, northern Spain 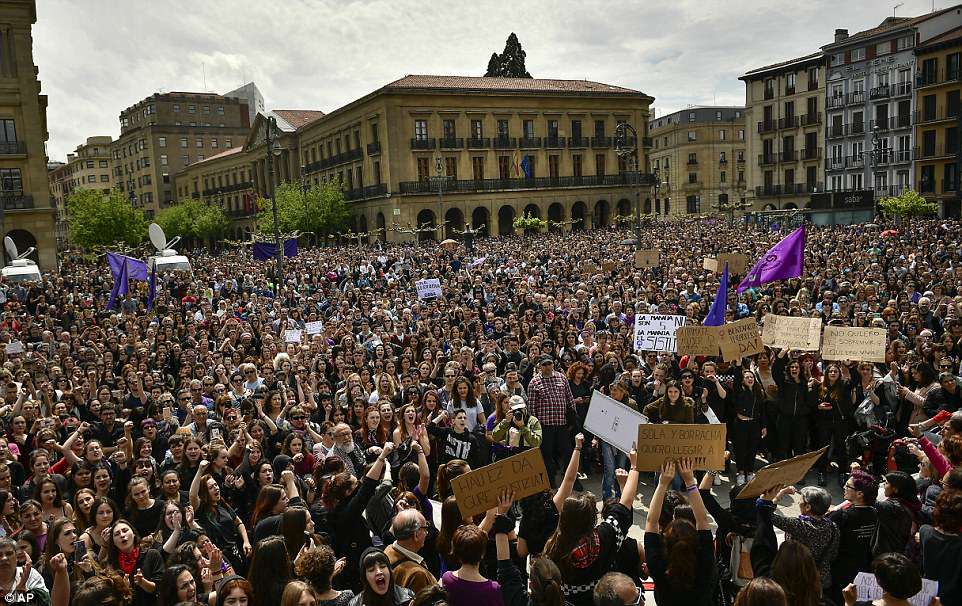 Thousands of people crowd at Plaza del Castillo square during a protest in Pamplona, northern Spain 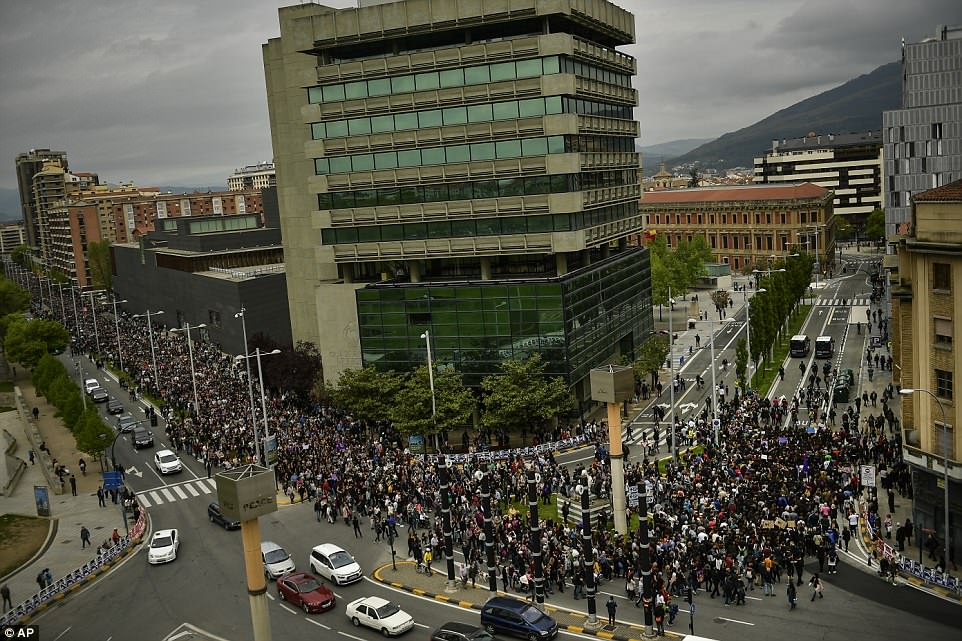 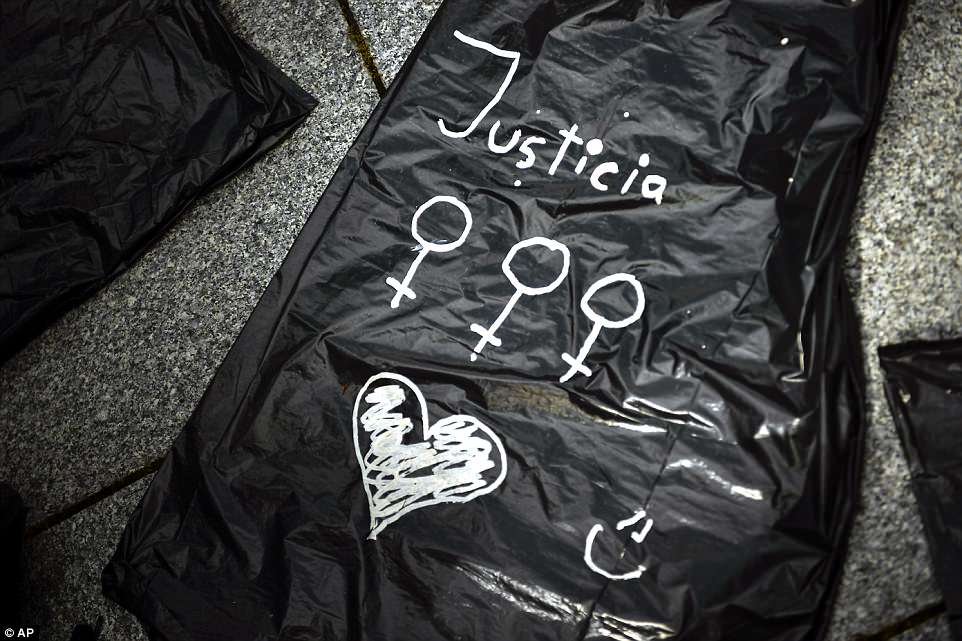 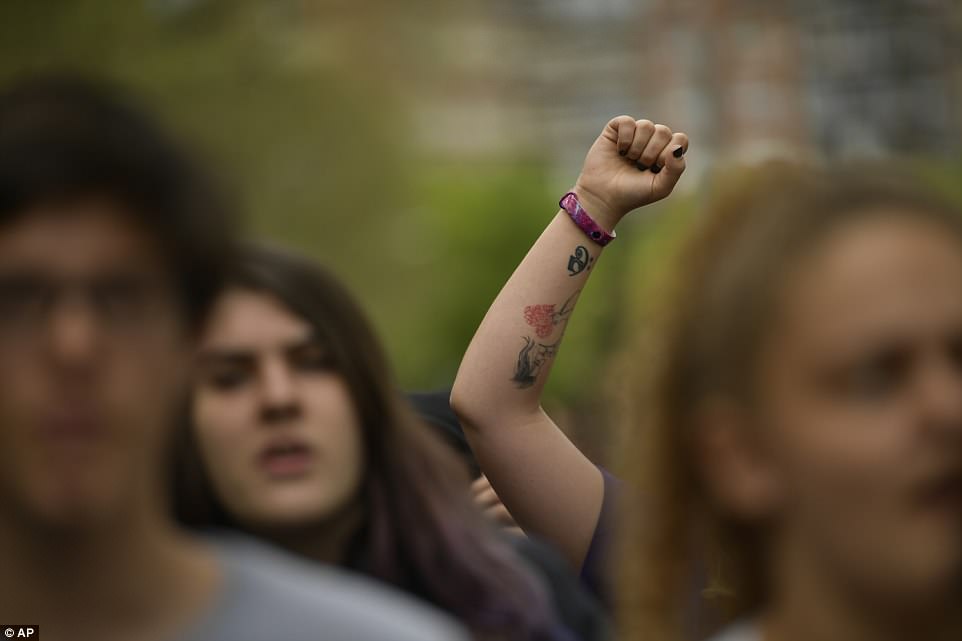 A woman holds up her arm during a protest against sexual abuse in Pamplona, northern Spain

And a community of 16 Carmelite nuns in the Hondarribia monastery in the Basque country condemned the court ruling on Facebook.

‘We live cloistered away, wearing a habit that reaches down to our ankles, we don’t go out in the evening, we don’t go to parties, we don’t drink alcohol and we’ve undertaken a vow of chastity,’ the nuns said.

‘And because that’s our free choice, we will defend with all the means at our disposal … the right of all woman to FREELY do the opposite, without them being judged, raped, threatened, killed or humiliated,’ they wrote.

State prosecutors said they would appeal the ruling.

‘It’s the product of a patriarchal and macho culture,’ she added.

The case was cited in signs carried by many women during massive demonstrations held in cities across Spain to mark International Women’s Day in March, which were among the largest in Europe.