Three for; Three against; As nine Bank of England chiefs prepare for crucial vote: It’s up to you Guys… three men who hold the key to rate rise

Three Bank of England chiefs can today be identified as the ‘swing voters’ who will decide whether interest rates rise this week.

Analysis by The Mail on Sunday found the Bank’s three deputy governors – Sir Jon Cunliffe, Sir Dave Ramsden and Ben Broadbent – are set to hold the balance of power on the nine-person panel that sets rates.

The Monetary Policy Committee will meet on Thursday in a knife-edge vote on whether to increase the Bank of England base rate from a record low of 0.1 per cent, potentially to 0.25 per cent. Rates will rise if a majority votes in favour – that is five or more members of the committee.

According to two leading economic forecasters, three MPC members are highly likely to vote in favour of a rate rise.

David ‘Danny’ Blanchflower, who himself was a Bank of England rate-setter from 2006 to 2009, and independent economist Dilip Shah both said that Bank Governor Andrew Bailey, chief economist Huw Pill and external member Michael Saunders are more likely than not to support a rise.

On the other side of the committee, Blanchflower and Shah said external MPC members Jonathan Haskel, Catherine Mann and Silvana Tenreyro – who are not employed directly by the Bank – are likely to vote against a rise.

That leaves the three deputy governors as the power brokers at Thursday’s crunch meeting. The experts, however, are at odds over which way the three men will vote.

Blanchflower, now an economics professor at both Dartmouth University, New Hampshire, and Stirling University in Scotland, predicts that all three will vote to hold rates at 0.1 per cent. He forecasts a 6-3 vote against a rate rise.

But Shah – who has worked in the public and private sectors and has twice won the Economic Research Council’s forecasting competition The Clash of the Titans – predicts all the deputies will vote in favour of a rise. His prediction for this week’s MPC meeting is the mirror-image of Blanchflower’s: a 6-3 vote to increase rates.

Shah said there were signs the five full-time Bank employees on the MPC, plus Saunders, would start a tightening cycle taking the base rate to between 1 and 1.5 per cent by the end of 2022. He added: ‘From the majority of Bank of England speeches, it seems clear they have admitted they are behind the curve on inflation and will correct course.’

Think-tanks were also divided on which way the decision would go.

Douglas McWilliams, deputy chairman of the Centre for Economics and Business Research, said: ‘The market has priced in a rise to 0.25 per cent, but I think it’s more likely the MPC will go for a 0.4 percentage point rise to 0.5 per cent. Last week’s Budget plans will make no sense if we still have high inflation in 2023.’

Erik Britton, managing director at Fathom Consulting, disagreed, saying: ‘I would take the other side of the bet, and suggest the MPC will not hike materially this year.’

He added: ‘If it did, I’d guess they would reverse course. These inflationary pressures are temporary.’ 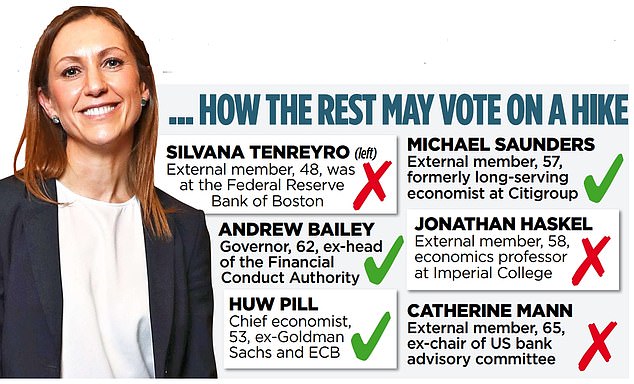 Most MPC meetings see a majority for maintaining rates at their current level. However, rising inflation – and Rishi Sunak’s £150billion spending splurge last week – may well have changed opinions. The Chancellor has admitted that rising inflation is a threat to his plans.

In July, Broadbent, 56, who worked at Goldman Sachs before joining the Bank, said he believed that inflation was temporary, suggesting that a rate rise may not be necessary. He said: ‘I’m not convinced that the current inflation in retail goods prices should mean higher inflation 18 to 24 months ahead.’

Sir Dave Ramsden, 57, indicated in July that he gave ‘more weight’ on the idea that inflation was picking up, while in May, Sir John Cunliffe, 68, said he would wait for ‘clear evidence’ that the time was right for rate rises.

Both knights of the realm are former Treasury officials.