The lawsuit said that the experiences of the three workers ‘are particularly egregious examples of the serious harm that occurs when a corporation fails to take responsibility for the discriminatory conduct of its managers and thus permits an environment of pervasive and intentional racial discrimination to take hold at one of its corporate owned and operated restaurants.’

Three workers at this McDonald’s in Lakeland, Florida, filed a federal civil rights lawsuit claiming they witnesses racist remarks and experience retaliation from their manager

Among their claims are that they heard the manager – who was not named – make racist comments regarding both black employees and restaurant workers and that she curtailed black workers’ hours after being confronted about her words, the Tampa Bay Times reported.

‘She treats black employees more harshly,’ Booker said during the video news conference about the lawsuit, ‘and says hateful things about black people that made me feel like crying.’

The lawsuit claimed that the manager at their McDonald’s in Lakeland, Florida, gave black workers bad performance reviews and gave them cleaning tasks that were not part of their job.

The lawsuit noted that the manager began working at the McDonald’s location in fall 2019, while the trio’s lawyer, Peter Helwig, said that the manager’s attitude towards her black employees became more aggressive over the past few months, but began in 2019. 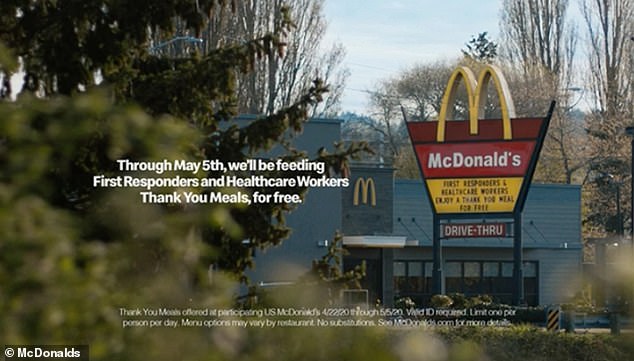 Among the lawsuit claims was that during the essential workers ‘Thank You Meal’ promotion, the manager made black frontline workers show job ID, but didn’t do that for white workers

The manager’s ethnicity was not mentioned in the lawsuit, but it was said that she is not black.

The lawsuit listed a few examples of racist remarks overhead by the black employee in recent months.

The employees claimed that during the ‘Thank You Meals’ promotion McDonald’s ran from April 22 to May 5, offering a free meal for essential workers  during the height of the coronavirus pandemic, the manager asked black customers to show proof of frontline employment.

The manager allegedly didn’t require any ID checking for white essential workers, however.

Scott said, during a video news conference, that when a black customer asked for grape jelly and ketchup to be included in their breakfast order, the manager said, ‘it’s always Black people who want free stuff.’

The manager also said at the time that black people are ‘aggressive and trying to fight’ and added that ‘all they want to do is smoke weed.’

According to the lawsuit, Scott said that when she went to speak to the manager about those statements, the manager apologized for offending her.

She also allegedly said to Scott, ‘you know what I say is true.’

Moody, who works as a cook at the McDonald’s restaurant, said that on one occasion he had asked for help at the grill because the orders were beginning to stack up during peak hours.

He said that he was sent home for the rest of his shift, without pay, after being told that he was unable to do his job.

The three workers who filed the lawsuit said that the manager had cut their working hours in half, although non-black employees were still working nearly 40 hours a week.

They claimed that the manager told them that the work hour reduction was due to coronavirus, but they said that the location is actively seeking new hires.

‘I’m a mother, raising my children on just $9.25 an hour,’ Scott said, according to the Tampa Bay Times.

‘When my hours were cut, it didn’t just affect the size of my wallet, it put my livelihood and my children’s well-being in jeopardy. I can’t afford to lose pay or work, and now I’ve had to cut back on how much I eat to make sure there’s enough for my kids.’

Scott said that she had to take on a second job after her hours were cut.

The workers said that they experienced retaliation from the manager after they presented a petition to management on Juneteenth, the anniversary of slaves’ emancipation in the US.

The petition stated that ‘Employees who are treated unfairly aren’t allowed to achieve workplace success to their fullest potential.’

It also said: ‘Allowing workplace unfairness to continue sends the message to employees that this type of behavior is acceptable. We demand management takes steps to keep all employees feeling respected and treated as equals while building a positive work environment.’

According to the three workers, they were told to leave the restaurant.

Scott said that she was told to scrub garbage cans at a later time, while Moody said that he was given a low performance review which derailed his chances at getting a promotion.

Both Scott and Moody said that their efforts to address the situation with human resources at the corporate level failed.

Moody said he was told that the store was profitable and therefore the manager would stay put. He said that he was told he could transfer to a different McDonald’s location.

Scott, meanwhile, claims that she was told by a human resources worker that the manager wasn’t racist because the HR person knew her outside of work.

This isn’t the first case filed against McDonald’s for alleged racism this year.

Two black McDonald’s executives in Chicago claimed that the company had passed them over for promotions and then demoted them in a January lawsuit.

They claimed that racists comments had stopped them from rising up the corporate ladder.

This January lawsuit, the new lawsuit in Florida claimed, indicated that McDonald’s has a problem with systemic racism.

‘If McDonald’s believed that Black lives mattered then it’s time to make our restaurant safe for Black workers and customers,’ Scott said during the news conference.

McDonald’s is one of the major American corporations that has publicly thrown its support behind the Black Lives Matter campaign, creating a 60-second ad memorializing black people who were killed by police or fatally shot while unarmed in early June.

The fast food giant also said it was donating $1million to racial justice organizations the National Urban League and the NAACP, according to Business Insider.