Three ‘British’ men stabbed in 6am brawl on Magaluf beach

Three men have reportedly been stabbed after an early-morning mass brawl broke out on the party destination Magaluf on Mallorca.

All three men are believed to be British tourists aged between 20 and 30, with the alleged attacker also reportedly a British man.

The fight broke out in the popular Punta Ballena district of Magaluf at around 6.15am on Tuesday morning.

Fight: The three men injured in the fight are believed to be British tourists aged between 20 and 30. Pictured is a street in Magaluf at an unrelated date

The nationality of the men has not yet been confirmed but one Spanish newspaper, reports police are hunting for the alleged attacker, stating that he is British.

Police were called to the scene but the crowd had already dispersed. They were then told about three men lying injured on the beach.

Witnesses have told the police the fight was ‘violent’ and they believe at least one of the three men injured was ‘on the opposing side’ as they saw him exchanging threats with another of the trio. 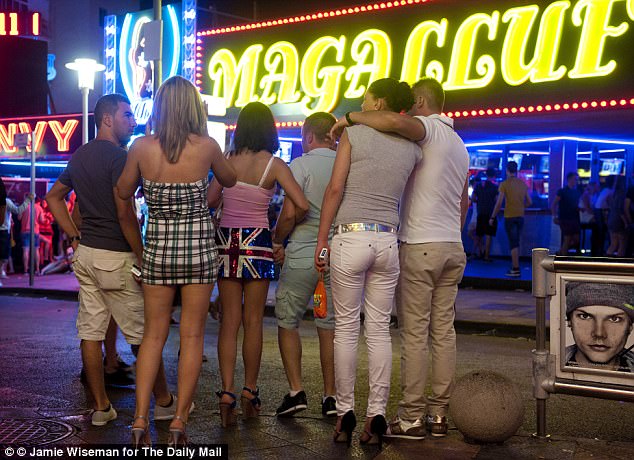 Police are searching for the attacker, who is also reportedly a British man. Pictured are tourists in Magaluf at an unrelated date

The man most seriously injured is reported to be 28 years old, and stabbed in the stomach.

The other two were also injured, at least one of them, aged 20, having been stabbed as well. They were also taken to hospital.

Police believe other people might have been injured in the fight but managed to get away before the emergency services arrived.