By Ryan Fahey For Mailonline and Pa

Three clinics have been rapped for misleading pregnant women by exaggerating the effectiveness of Down’s Syndrome blood tests.

My Baby Company, The Birth Company and Ultrasound Direct charge up to £650 for the test.

All three claimed it was 99 per cent accurate – but the Advertising Standards Authority said evidence shows only 82 per cent of babies given a ‘positive’ result would be born with Down’s.

An undated handout image issued by the Advertising Standards Authority shows an advert for prenatal testing services by The Birth Company, which has been banned for using misleading statistics about its accuracy

The ASA banned the misleading claims, warning the clinics had failed to spell out the risk of false positives which could lead to considerable distress.

In relation to all three firms, the ASA said: ‘Because consumers were likely to understand from the ad that the detection rate signified the likelihood that the foetus would have the relevant condition in the event of a ‘positive result’, when that was not the case, we concluded that the ad was misleading.’

One of the websites, mybabycompany.co.uk, seen in April 2019, promoted its test under the heading ‘Sensitivity’, stating that it was reliable even at a low fetal fraction – the term given to the proportion of DNA belonging to the placenta found in the mother’s blood.

Findings by the ASA concluded that the 99 per cent advertised by the company was misleading and that the figure was actually between 59 and 99 per cent.

The agency also found that the results would require further invasive tests to confirm whether the foetus had Down’s syndrome.

The Birth Company, which listed the figures ’99 per cent’ for Down’s syndrome and ‘93.8 per cent’ for Patau’s syndrome, said data on its website related to the detection rate and the false positive rate of its Harmony Test. 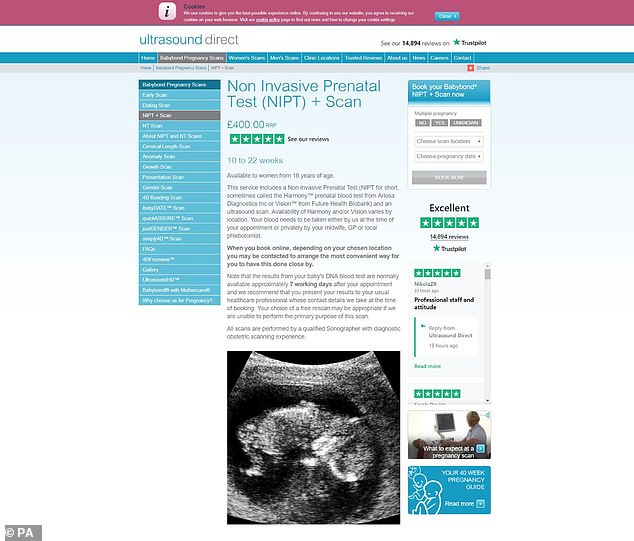 My Baby Company, The Birth Company and Ultrasound Direct (pictured) charge up to £650 for the test 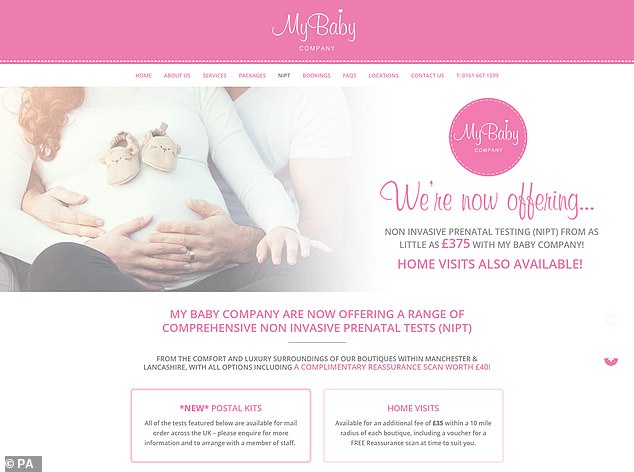 It said the Harmony Test had a Positive Predictive Value of 80.9 per cent, which represented the proportion of patients given a high probability result who go on to have the condition confirmed in the foetus, but explained that this was not included in the ad as it varied from patient to patient.

The ASA said: ‘We understood that a systematic review of the performance of non-invasive prenatal testing in general found that it had a Positive Predictive Value (PPV) of 82 per cent for Down’s syndrome, 37 per cent for Edwards’ syndrome and 49 per cent for Patau’s syndrome, meaning out of all the foetuses with ‘positive’ results, 82 per cent would ultimately have Down’s syndrome, as opposed to the 99 per cent detection rate figure that consumers would understand from the ad.’

Ultrasound Direct said its test detected more than 99 per cent of Down’s syndrome cases, and provided a report which showed that it identified 107 out of 108 cases.

The ASA said consumers would interpret the claim to mean that there was a 99 per cent chance that a foetus would ultimately have Down’s syndrome following a positive result.

However it found that the figure did not give any insight into the proportion of positive results where the foetus would ultimately not have Down’s syndrome.

In relation to all three firms, the ASA said: ‘Because consumers were likely to understand from the ad that the detection rate signified the likelihood that the foetus would have the relevant condition in the event of a ‘positive result’, when that was not the case, we concluded that the ad was misleading.’