Three men charged in rape and kidnap of Minnesota teen

Safe return: The Missing Minnesota teen was found alive on September 5, after she swam across a lake to freedom

Three men were charged in Minnesota Thursday with kidnapping and false imprisonment of a 15-year-old girl who managed to escape and swim across a lake to her safety.

Thomas Jay Barker, 32, Joshua Lee Holby, 31, and Steven Michael Samuel Powers, 20, have all been charged with kidnapping and falsely imprisoning a girl from Alexandria.

Powers and Barker were also charged with first-degree criminal sexual conduct of the girl, who said that she was held captive for 29 days and repeatedly raped and beaten.

The young woman, who police are hailing for her bravery, also said the men attempted to drown her on a number of occasions. The horrific details of the alleged crime have been released in a criminal complaint filed in Douglas County on Thursday.

Barker, who is believed to be the ringleader of the trio, has cerebral palsy and has admitted to using methamphetamine. He is also the father of one of the victim’s close friends, court documents reveal.

DailyMail.com is not naming the 15-year-old girl or showing her face because she is now believed to be the victim of multiple sexual assaults.

All three suspects made their first court appearance on Thursday afternoon and had bail set at $2million for Powers and Baker and $1.5million or Holby, with no conditions.

They will all appear in court again on September 18.

Court documents outline the horrific crimes they were each accused of after the 15-year-old helped police track down the suspects.

The teen was home alone around 10.30pm August 9 when Thomas Barker, who was the father of one of her friends, knocked on the door, according to the criminal complaint.

She told police that Barker told her his son needed help and asked her to come with him to try and speak with his son.  Trusting him, the teen agreed and didn’t bring her phone with her, she said.

Barker then allegedly drove the victim to his mobile home about nine miles down the road. 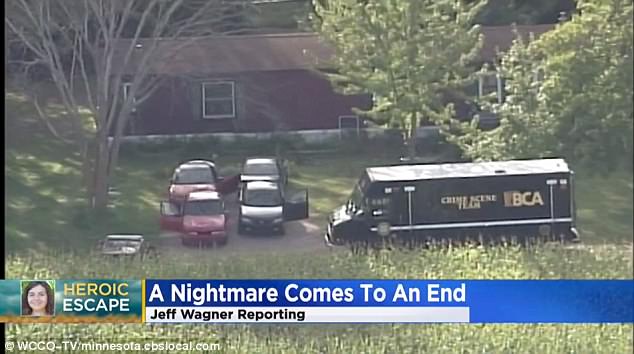 The girl had been taken to this home in Carlos, Minnesota, after her abduction a month ago and locked in a closet for the majority of the time

Once inside Barker, who is physically impaired with cerebral palsy restrained her with zip ties, held a gun to her head and threatened to kill her, and then raped her, she told police.

Within three hours of first leaving her home her mother reported her missing.

For the majority of the 29 days she was in captivity, the teen said she was locked in a closet in Barker’s bedroom, given Taco Bell meals and other fast food and water, and assaulted repeatedly.

On at least one occasion, she said Barker put her in the bathtub and ‘that he tried to drown her,’ and that she fought against him. Eventually he gave up, she said.

In a separate incident she said Holby and Barker put her in a duffel bag in the bathtub. She said that because of her small 110lb frame, she managed to stick her head out of a hole in the bag to see and breathe.

And on another day she said a rope or cord of some sort was placed around her neck and she was told to stand on a bucket.

‘She stated that Holby then forced her off the bucket and she described a period in which she could not breathe,’ the court document reads.

About two weeks into her abduction Powers came to the house and was told not to go into Barker’s room when he and Holby left the residence, according to the complaint.

But curiosity got the best of him and he went in and found her locked in the closet, but didn’t free her or call the cops, the complaint says.

In the closet, she told police she had a television set and a fan, and food and water were brought to her by her captors.

On August 30, the girl alleges that a police deputy came and knocked on the door of the mobile home where she was being kept to look into a report of stolen property. No one answered the door, and all three men sat inside the home silently.

Since then that home has been searched by police – who found a pair of women’s underwear, rope and a hypodermic needle, the court documents read.

No one answered the door, and after the men told her to get into a duffel bag, loaded her in the back of a truck before driving 30 miles away to a different home which they broke into using a screwdriver. 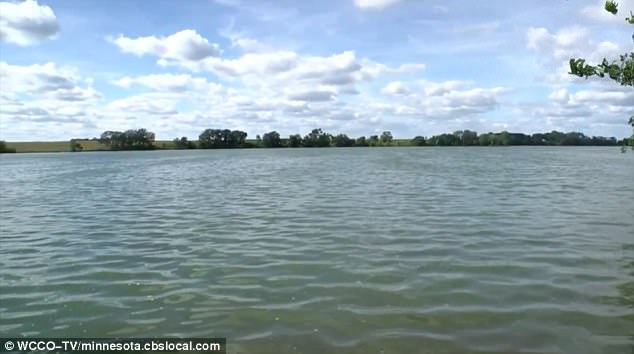 Swimming for her life: After the girl escaped on Tuesday, she swam across a portion of Thompson Lake (pictured)

That home in Barrett, Minnesota, the teen said, is where she was able to make her escape on Tuesday September 5 when the men left to get pizza and she was left completely alone for the first time since being taken.

She told police that she knocked on neighboring door and then swam across part of Thompson Lake lake, losing her pants and shoes in the process, before running through a field and flagging down a farmer for help.

Because she’d been reported missing for nearly a month, the farmer immediately recognized the soaking wet girl.

While she was sitting in the Good Samaritan’s car, awaiting police to arrive, she spotted Steven Powers drive by and alerted the man, who helped police track down that suspect.

The teen later assisted police in locating the other two men, and all three were taken into custody.

The Alexandria Police Department announced on its Facebook page that the girl, who had been missing since August 8, had been located about 40 miles from her home in Alexandria.

Barker told police that he used methamphetamine and alcohol, but denied knowing who the victim is or ever picking her up, according to the complaint.

He also told police that Powers had been with the girl sexually, but that he hadn’t. Barker refused to answer more questions, according to the complaint.

According to Chief Wyffels, none of the suspects said why they targeted the 15-year-old. 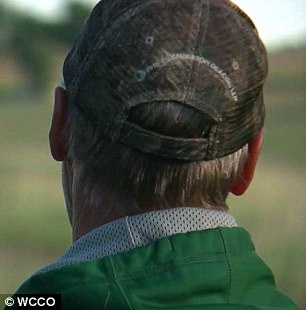 Good Samaritan: This Grant County farmer encountered the missing teen near his home Tuesday and offered to drive her to safety

Following her rescue, the 15-year-old was taken to Douglas County Hospital to be treated for ‘minor injuries’ and has since been reunited with her family.

The farmer who helped the teenage girl spoke to the station WCCO on the condition of anonymity, saying that he happened to be next to his house in Grant County on Tuesday because he forgot something at home and left work to retrieve it.

He was getting ready to head back to work when he spotted something in the grass behind the property, which turned out to be a girl. He says he recognized her at once as the missing teen from news reports and offered to take her to safety.

‘It was just a great feeling,’ said the Good Samaritan, who has three daughters of his own. ‘[I told her] “just get in the pickup, we’re going to help you now.”’

He added, ‘It was like somebody shined a big beam of light on me yesterday for some reason and, I don’t know, I was kind of on a high all day long yesterday.’ 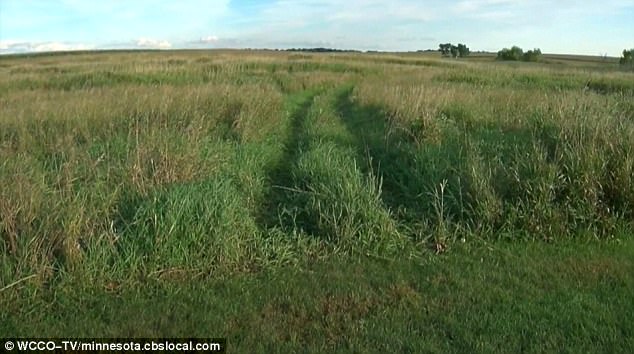 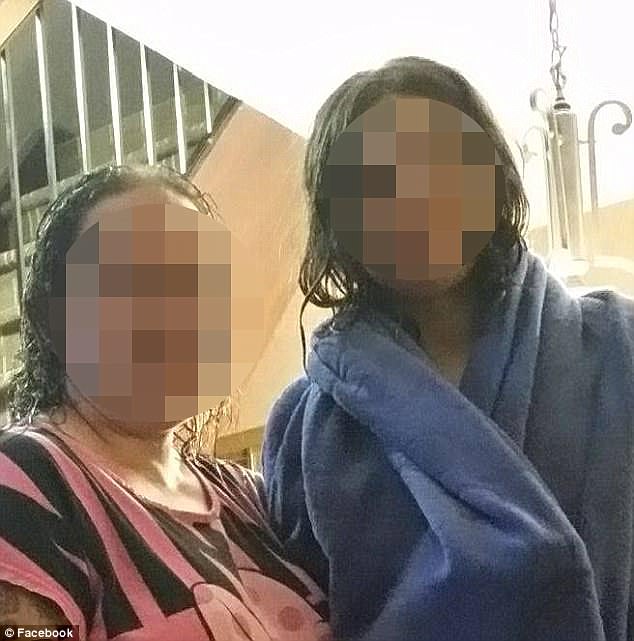 Brave: A 15-year-old Minnesota girl is pictured with her mother on Tuesday, shortly after she escaped from three men who had been keeping her captive for a month

The girl’s safe return came a day after an anonymous donor added $5,000 to a $2,000 reward for information leading to her safe return.

On Tuesday evening, her mother shared a photo taken after she was reunited with her daughter.

It shows the 15-year-old wrapped in a blue blanket, standing next to her mother with a slight smile on her face.

The mom also posted an update on a Facebook group dedicated to finding her daughter, saying that the 15-year-old has been found and is safe.

‘Please be respectful I will not be answering any messages or calls and do not post rumors (the girl) and I will not tolerate that,’ she wrote.

In a follow-up post, the parent thanked law enforcement officials for staying on top of the missing person case and even working on their days off to help bring her daughter home.

The mother reiterated her request for privacy, writing that their family had been apart for four weeks and need their space.

‘God answers prayers!’ she said. ‘I am so damn proud of her [victim] and so happy to have her home safe with us. Thank you all so much.’

Police are now trying to identify the specific cornfields through which the suspects drove with the kidnapped girl. They are also hoping to locate her missing shoes and pants, which were lost as she swam across the lake for help.