A three-month-old baby boy in India is battling for his life after surgery to correct a rare condition which has seen his head grow to an extreme size.

Ankit Minj, dubbed an ‘alien’ by cruel strangers, suffers from a rare condition called hydrocephalus – a build-up of fluid inside his skull which can be deadly.

Described as an ‘extreme case’, his large head weighs 5.5lbs (2.5kg) and is 27 inches in circumference because of the excess fluid.

Doctors have been able to insert a shunt into his brain to remove some of the CSF fluid and stop further damage to his brain.

However, his ‘helpless’ parents, who live in the Latehar district, in Jharkhand, eastern India, fear that he will die regardless.

Ankit Minj, dubbed an ‘alien’ by cruel strangers, suffers from a rare condition called hydrocephalus – a build-up of fluid inside his skull which can be deadly

His mother Anjali, 25, and father Anil, 29, went to several doctors for help – but they couldn’t afford the surgery that was recommended.

They eventually took Ankit to the Rajendra Institute of Medical Sciences (RIMS) in Ranchi, approximately 124 miles (200km) from their home.

Surgeons at the government-run hospital performed the first part of the operation on December 24 – four days after he was admitted.

Dr Anil Kumar, head of neurosurgery, at RIMS, said: ‘He has come to us very late which is why his head has grown to such a large size.

‘We have inserted a shunt into his brain to stop further damage to the brain.

‘The chances of his skull reducing to a normal size is not very positive but we can stop any further damage with the help of a shunt.

‘This shunt will relieve pressure on the brain caused by fluid accumulation. We cannot say if he’s out of danger yet.

‘We would need to see him regularly to check if the shunt is working properly and there’s no infection.’ 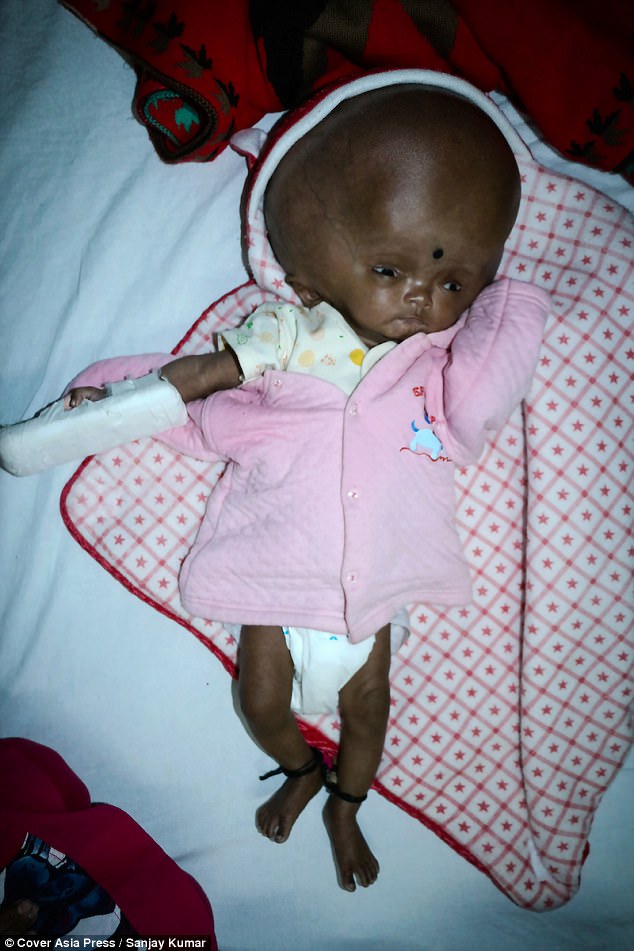 Described as an ‘extreme case’, his large head weighs 5.5lbs (2.5kg) and is 27 inches in circumference because of the excess fluid 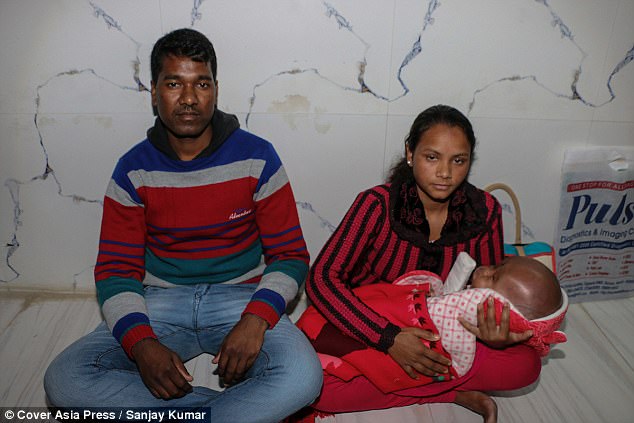 Doctors have been able to insert a shunt into his brain to remove some of the CSF fluid and stop further damage to his brain (pictured with his mother Anjali, 25, and father Anil, 29)

Ankit, who weighs 15lbs (7kg), is currently in hospital recovering with his parents by his side.

Policeman Anil said: ‘We have been told his skull will slowly get smaller. But I still fear for his life. He is so small, I wish I could do something to save his life.

Hydrocephalus is a build-up of cerebrospinal fluid in the brain.

The excess fluid leads to increased pressure on the brain which can cause damage to the brain tissue.

The main symptoms of hydrocephalus are: headache, nausea, vomiting, confusion and problems with vision (for example, blurred or double vision).

The key treatment for hydrocephalus is a shunt.

This is a thin tube implanted in the brain to drain away the excess CSF to another part of the body (often the abdominal cavity, the space around the bowel) where it can be absorbed into the bloodstream.

If left untreated, it carries the risk of long-term mental and physical disabilities as a result of permanent brain damage and can be fatal.

‘I don’t know what will happen in the future. Doctors say he’ll never be a normal child but I will keep wishing for a miracle.’

Anjali said she had no complications during pregnancy but when she gave birth Ankit was born with a larger than normal head.

She said: ‘I didn’t have an ultrasound during the pregnancy as we do not have a lot of facilities in our village.

‘But doctors said my baby was normal after touching my stomach and feeling its movements.

‘I took iron and multi vitamins throughout my pregnancy and I believed everything was fine. I was shocked to see my child when he was born.

‘I was just devastated. I had no idea about this condition but I feel terrible to see him like this.

‘I had so many dreams for my child but I do not even know what will happen to him now. He screams and cries in pain all day. We feel so helpless.’

Anjali added: ‘People show sympathy towards him and some pass weird comments but everyone just stares.

‘My son is not an alien, just another human being like others. He does not deserve to be stared at like this. I want him to be cured as soon as possible.’