The three New York City Police officers involved in the Shake Shack ‘poisoned’ milkshake scandal never actually got sick, but police exaggerated the incident and launched an investigation as the union tweeted cops are ‘under attack’.

On June 15 three officers, who were based in the Bronx but on protest duty in Lower Manhattan, ordered milkshakes from Shake Shack but found they smelled and tasted odd and they suspected they had bleach in them.

However, those officers never felt sick and threw the drinks away.

Yet the mishap escalated into a crime scene investigation where caution tape was put up, evidence was collected, and the Detective’s Endowment Association claimed the cops were ‘intentionally poisoned’.

The NYC Patrolmen’s Benevolent Association tweeted that ‘NYC police officers cannot even take a meal without coming under attack’.

The June 15 NYPD Shake Shack milkshake mishap has been revealed to be a faked scandal where the department launched an investigation and rushed the three officers involved to the hospital, even though they weren’t actually ill. A cop pictured at the Shake shack scene above 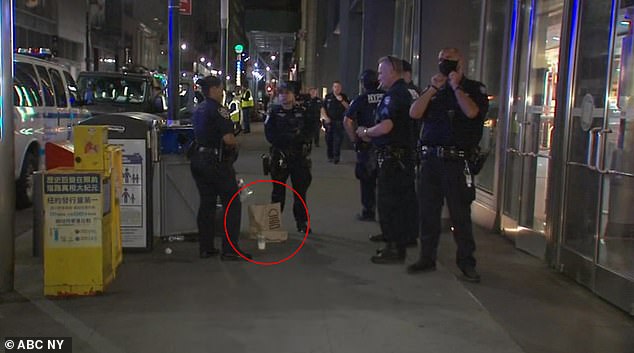 Three officers on protest duty were hospitalized after buying drinks that reportedly tasted like bleach. However, Shake Shack did not know cops had ordered those items because they ordered online and when the cops complained, they received an apology and food vouchers. Yet their supervisor still launched an investigation (cops on scene with evidence above) 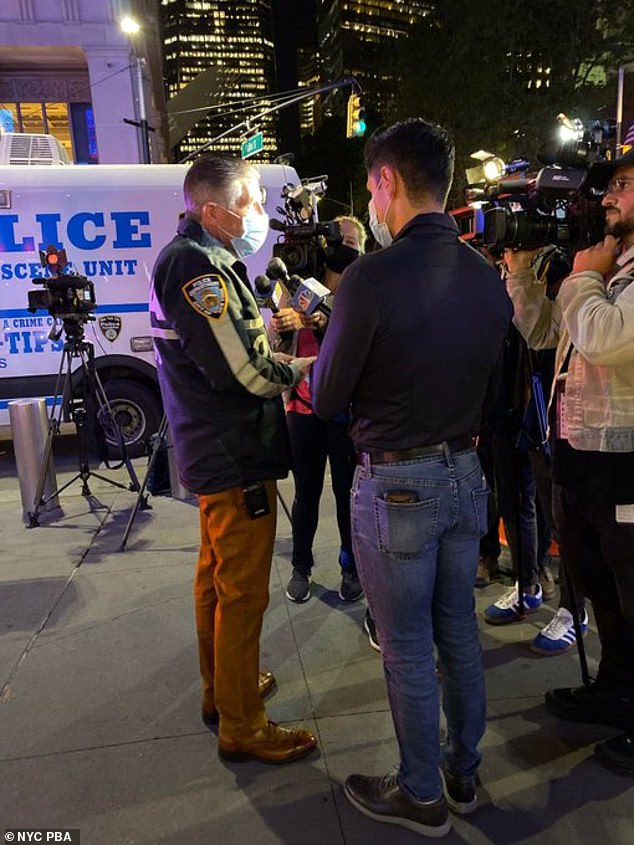 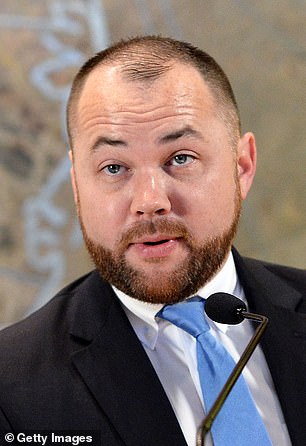 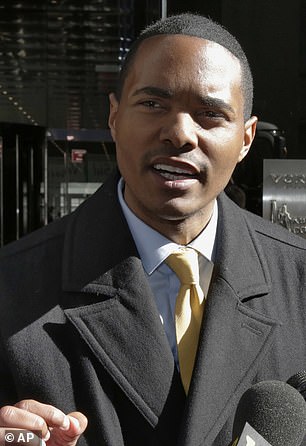 The incident took place as George Floyd protests and demonstrations decrying police brutality and racism took over the streets of the city, resulting in scuffles with officers.

More than 350 officers have been injured during ongoing protests in New York City.

However, new facts prove that the Shake Shack workers had no way of knowing their customers were police officers, because they ordered their threats via mobile app around 7.30pm and ordered three shakes across two separate orders.

A female officer purchased a strawberry shake from the restaurant on Broadway and Fulton Street and her two male colleagues grabbed cherry and vanilla drinks from the eatery.

When they tasted their drinks and found something was off, they threw them in the trash and alerted a manager, who apologized and gave them vouchers for free food or a drink, which they accepted, according to the New York Post.

But the evening took a dramatic turn when the officers reported the incident to their sergeant.

The supervisor responded by calling in the Emergency Service Unit to set up a crime scene and search for evidence by 9.20pm, about two hours after they got their orders.

The cops were rushed to Bellevue Hospital and where examined and released despite not ever feeling sick or exhibiting any symptoms.

At the same time a lietenant from the Bronx sent out an email to the unions stating that six cops ‘started throwing up after drinking beverages they got from shake shack on 200 Broadway.’ 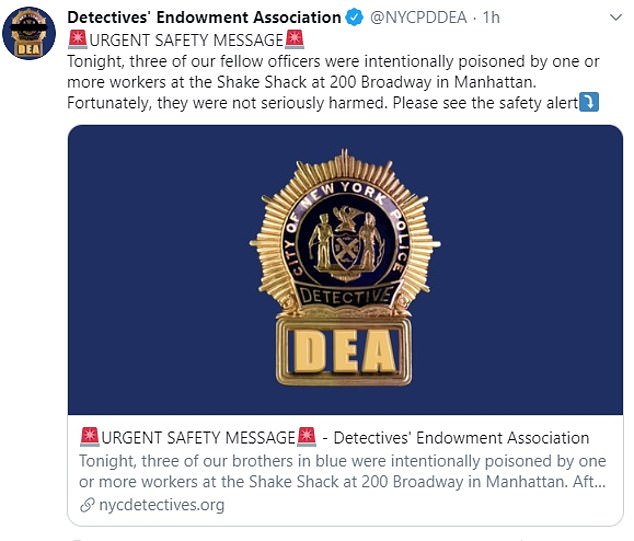 The Detective’s Endowment Association said the cops were ‘intentionally poisoned’ 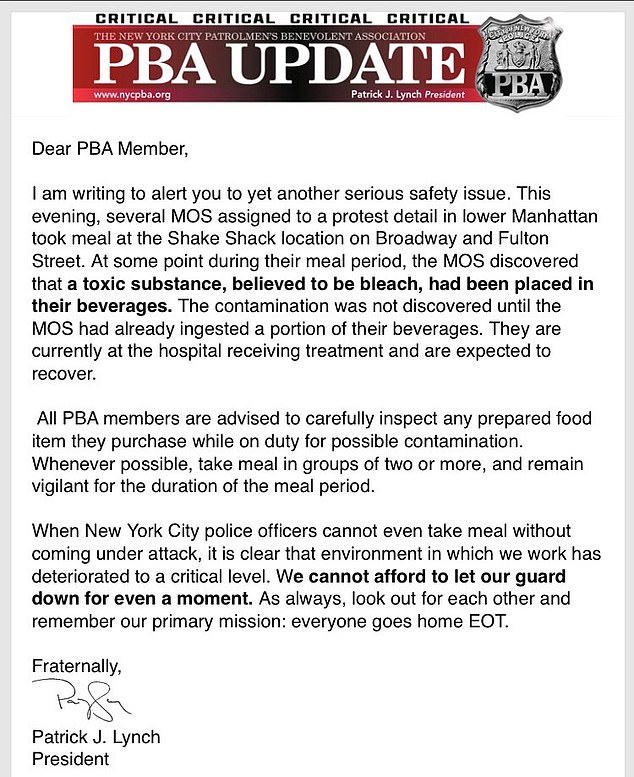 ‘When NYC police officers cannot even take meal without coming under attack, it is clear that environment in which we work has deteriorated to a critical level,’ Police Benevolent Association President Patrick Lynch tweeted following the Monday incident

Despite the escalated tensions around the drink mishap, detectives closed the case quickly after interviewing five employees and reviewing surveillance footage that showed the shakes were made normally.

The culprit was found to be residual milkstone remover, which is used to clean the milkshake machines, left inside the device.

But the incendiary messages sent out by the Detectives Endowment Association and Police Benevolent Association had already done its damage after the case was closed as #BoycottShakeShack started to trend on Twitter. 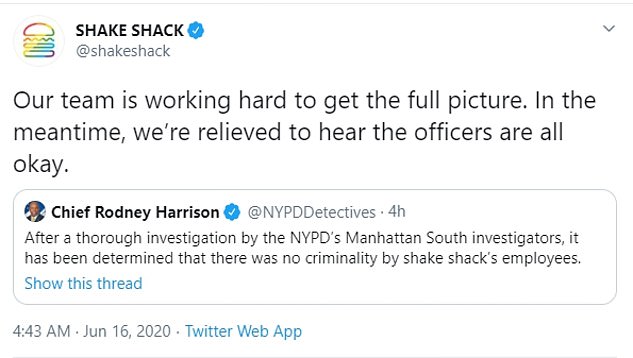 The next day Chief of Detectives Rodney Harrison clarified on Twitter that there was ‘no criminality’ in the incident.

The unions later deleted their tweets and privately blamed the lieutenant who first raised the alarm.

A review of the Shake Shack incident is also ongoing, the NYPD says.

Now New York officials are demanding a probe into the union’s exaggeration of the incident and their incendiary, misleading posts online.

The probe and incident come as the NYPD has faced major scrutiny from the public and calls for reform, which Mayor Bill de Blasio and Governor Andrew Cuomo have already jumpstarted from launching a police disciplinary database and banning police chokeholds across the state.