Three people were slashed in the early hours of Monday morning outside of the Stonewall Inn after a gay rights march descended into clashes between protesters and police on the 51st anniversary of the Stonewall Riots.

The incident happened around 2:30am near Christopher and Grove streets after the Queer Liberation March, taking place for the second year running, drew thousands to the cause after the traditional parade was called off in April.

It’s unclear what sparked the dangerous slashing, but footage taken by ABC 7 from the scene shows an altercation broke out in front of the historic bar that morning. 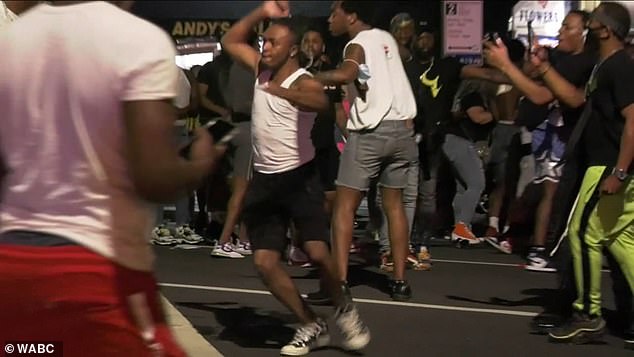 It’s unclear what caused the slashings, but footage taken from the scene showed at least three people engaged in an altercation (pictured) 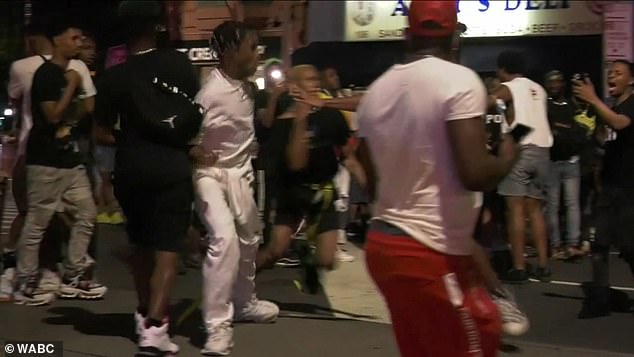 One of the slashing victims was reportedly arrested, while all three were taken to local hospitals and are in stable condition

At least three people can be seen hitting each other in an apparent scuffle. A large crowd of remaining revelers watch on as the apparent fight edged into the street.

The three victims were taken to local hospitals and are in stable condition. WCBS880 reports that one of the slashing victims was arrested.

The investigation remains ongoing. DailyMail.com has reached out to the New York Police Department for further comment.

The peaceful protest descended into chaos when police charged at activists gathered in Washington Square in Manhattan.

As two were being arrested for graffiti, protesters intervened in an attempt to free them, at which point police responded with pepper spray, multiple witnesses told Gothamist. 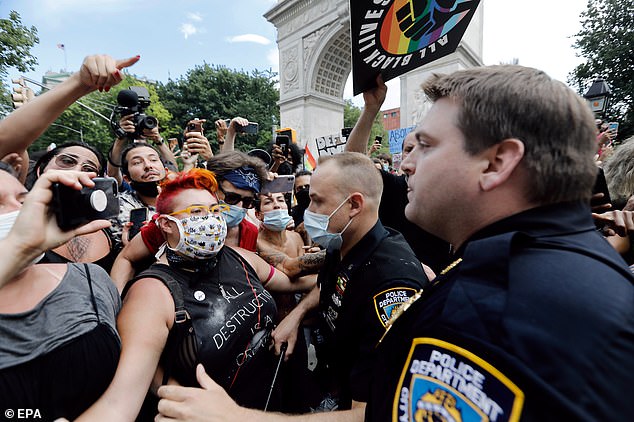 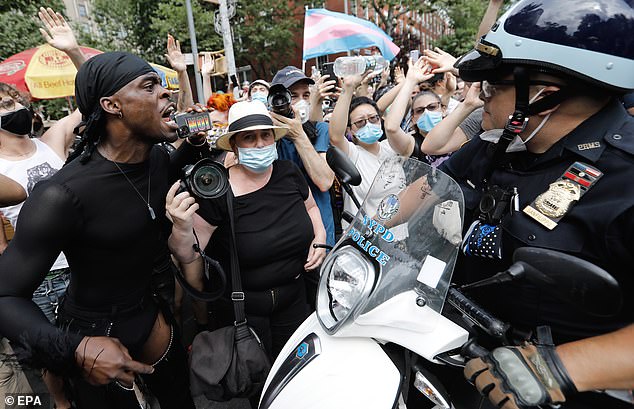 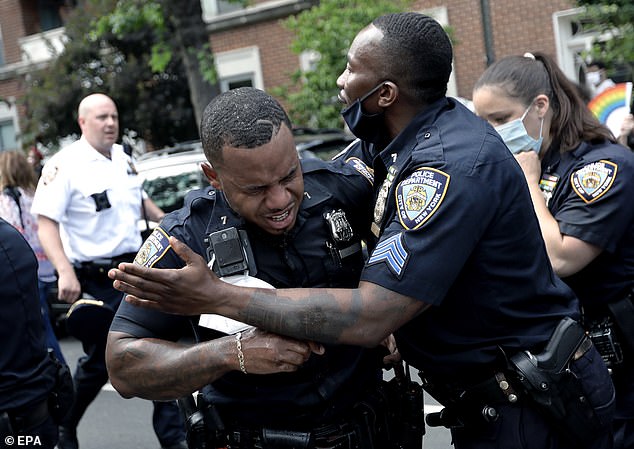 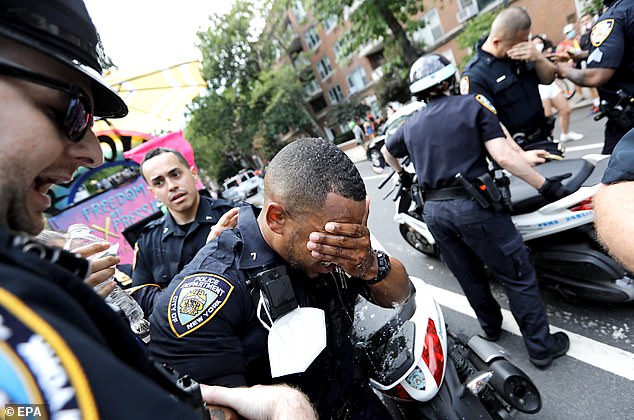 The officers doused their faces with water to get the pepper spray out of their eyes, assisted by their colleagues

A legal observer said at least four people were arrested and 10 others pepper sprayed – including someone running a fruit stand near protesters.

‘We were dancing right in front of the arch on Fifth Avenue and out of nowhere, cops started storming into the crowd,’ said Mike Perles, a 29-year-old city employee.

He told the site: ‘They pushed everyone in front of them out of the way and onto the ground. They pushed a reporter who was taking photos down and started randomly pepper spraying people.

‘I couldn’t see anyone instigating.

‘It seemed like they felt out numbered after entering a huge group and panicked and started beating people up.’

Pippa Bianco, a volunteer with NourishNYC, told Gothamist she was shoved and held down by officers while seeing three others get pepper sprayed.

‘I was totally peaceful, we all were – I was picking up food for a volunteer food station when the cops rushed into the crowd in a panic and started the violence.’

Bianco helped four others get water and medical attention after they were pepper sprayed.

She also saw a police medic pouring water into the eyes of two other cops after they accidentally got the pepper spray in their eyes.

‘The man who was arrested was crying and saying he was hurting and the cops were dragging him by his hands so his weight was against his shoulders pulling [on] the sockets,’ said Bianco. 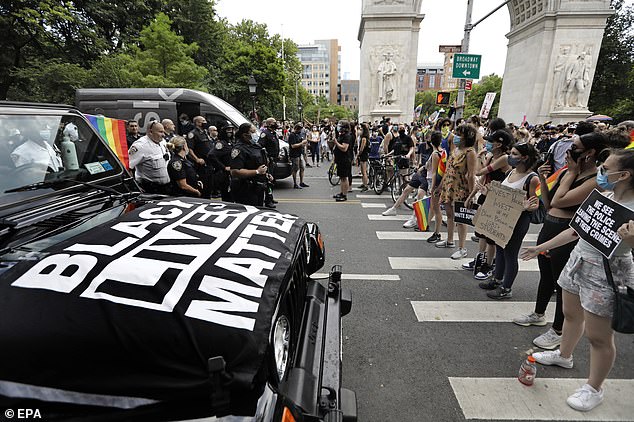 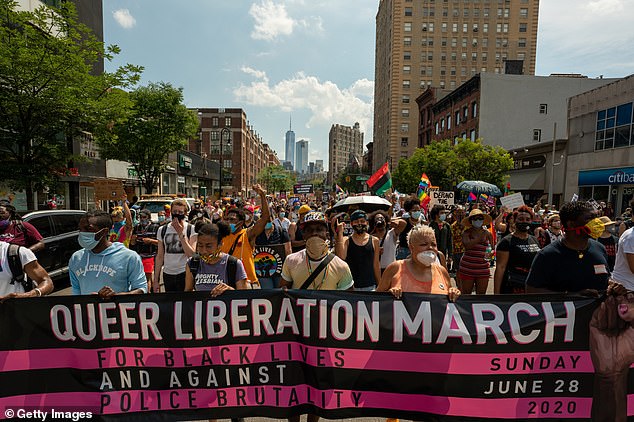 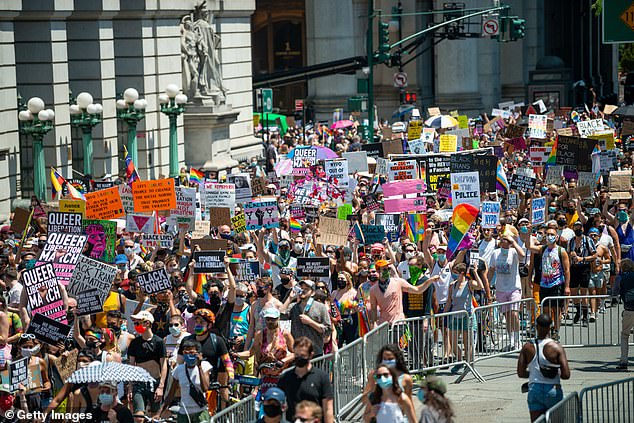 At the end of the 30-minute broadcast, he concluded: ‘I don’t know what kicked it off. But the situation was at a point where this was almost Stonewall Two.’

The Stonewall riots in 1969 saw the birth of the Pride movement.

Last year five million people joined in the festivities in New York marking the 50th anniversary of the Stonewall riots, and uniting everyone for the annual World Pride event.

‘There was an excessive amount of police once the march got here,’ Apolloa said.

‘If it wasn’t for that things wouldn’t have escalated to the point they did.’

The protest began around 1pm, and was promoted as an alternative to the traditional Pride parade.

Organizers said the Queer Liberation March was less corporate and focused on defunding NYPD, in addition to defending gay rights.

Bill de Blasio, the mayor of New York, is under pressure to shave as much as $1 billion from the City’s $6 billion policing budget. 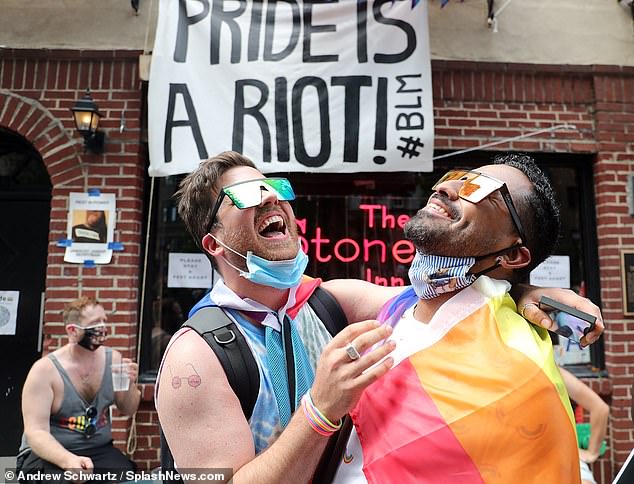 Thousands of people joined in the demonstration, which was an alternative to the traditional Pride Parade 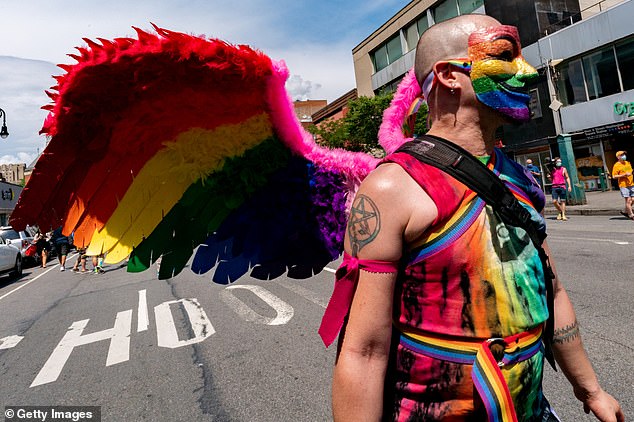 Protesters, activists and their supporters took to the streets of Manhattan on Sunday in a show of force 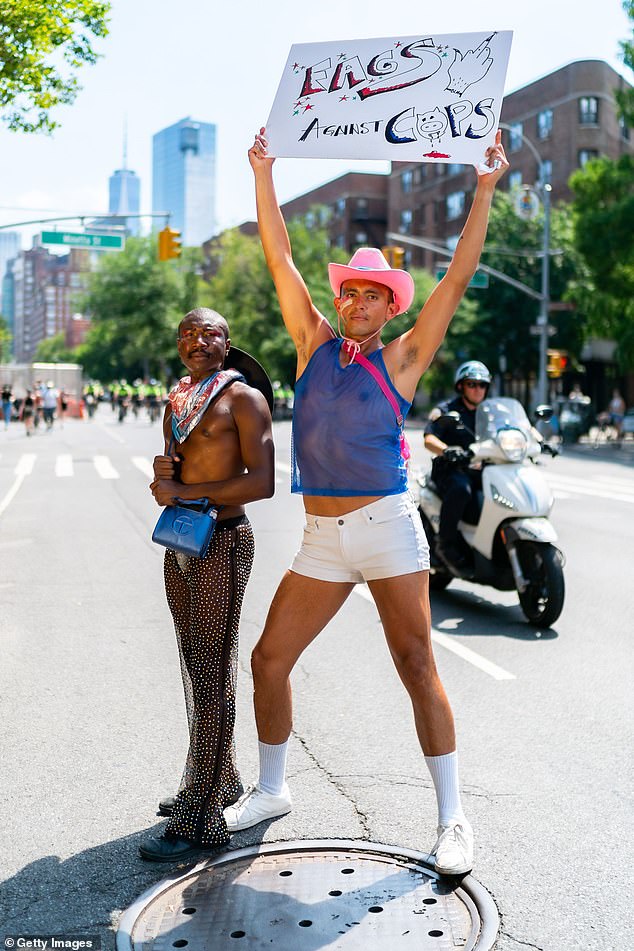 The demonstrators were calling for an end to police brutality, the defunding of the NYPD, and respect for gay rights 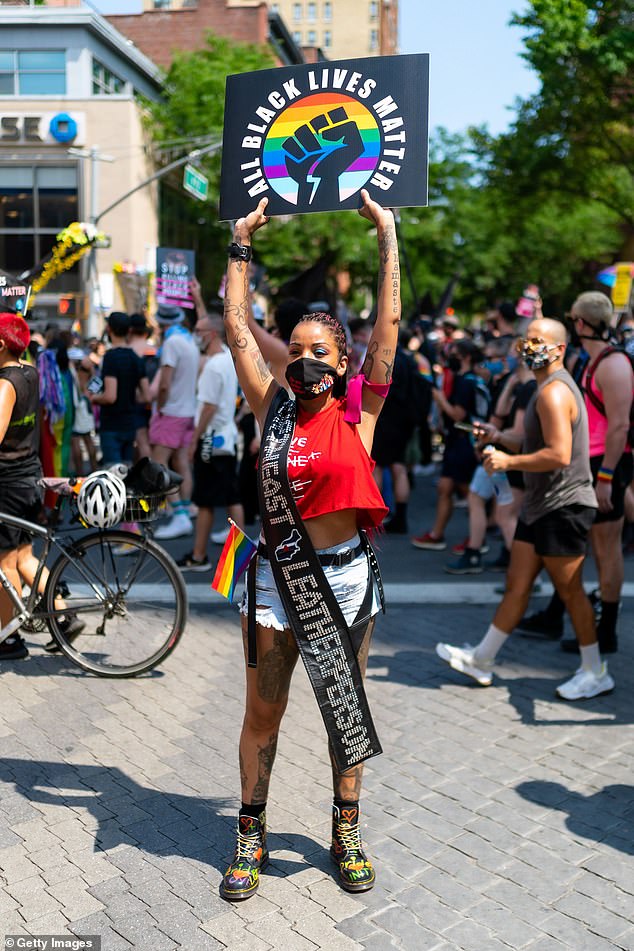 Jay Walker, one of the organizers, said: ‘We’re just standing here arm-and-arm with black folks, black trans folks, with brown folks, everybody that is under the boot of the police – not just NYPD – all over this country.’

‘One of our mottoes was ‘We’re here for queer liberation, not rainbow capitalism,” said one of the organizers, Natalie James, at a recent event.

‘They were kind of sickened by it.’

He brought up the concept of ‘pinkwashing’, in which ‘corporate bad actors’ make token gestures but fail to address root causes of discrimination.

‘A big part of our issue with the corporations is they’re not consistent in their support for us throughout the year,’ said Francesca Barjon, the group’s social-media organizer.

‘It’s about being able to profit off of us in June.’

Walker said they intended to call the protest off due to COVID-19 concerns, but reversed their decision following the killing of George Floyd in Minneapolis on May 25.

‘Stonewall was a riot, we’re not rioting,’ he told amNewYork Metro, ahead of Sunday’s event. 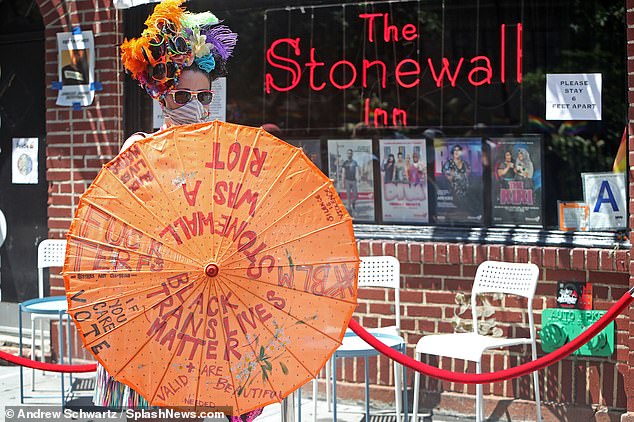 ‘We’re just standing here arm-and-arm with black folks, black trans folks, with brown folks, everybody that is under the boot of the police – not just NYPD – all over this country.

‘We had every intention of doing this again this year until Ms. ‘Rona showed up, so we canceled and went virtual.

‘Then when we all saw Mr Floyd being murdered before our eyes, we started getting out in the streets.’

The Queer Liberation March had its roots in the 2017 Pride March, which featured the  debut of the Resistance Contingent – a consortium of activist groups that formed in response to the Trump Administration.

It included groups such as Gays Against Guns, which staged a die-in, and Hoods4Justice, which formed a blockade to prevent the NYPD marching band from joining the parade, with banners reading ‘There are no queer friendly cops’ and ‘Decolonize pride.’ 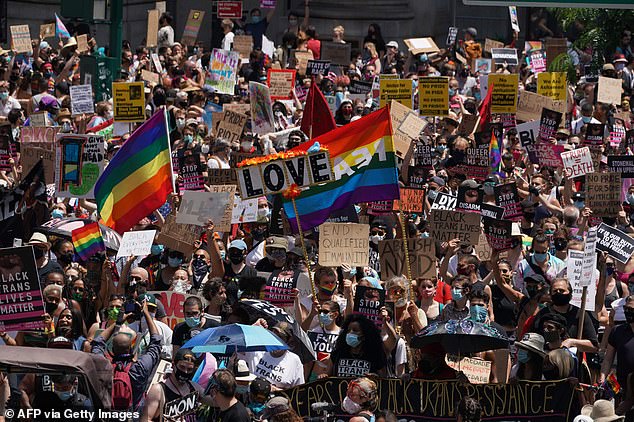 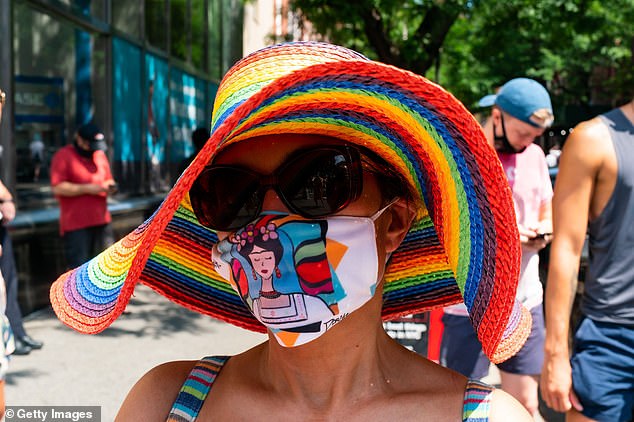 New York was not the only city to host alternative Pride parades.

In Chicago, where the official parade was canceled due to COVID, a group of LGBTQ activists and community members marched through the North Side to ‘reclaim Pride’ from corporate sponsors.

Organizers said the Sunday march and rally is about reclaiming the grassroots efforts that launched the LGBTQ movement.

Hundreds of people gathered near the CTA Belmont station in the Lakeview neighborhood at noon, and marchers made their way along the two-mile route north to Uptown.

In Minneapolis, nearly 1,000 people took to the streets to demand respect for gay rights and justice for George Floyd.

The peaceful protesters were demanding justice for Floyd, community control of police and defense of black trans people.

DJ Hooker, who organized the rally, said it was more relevant than ever.

‘We are calling this the “Pride take back,”‘ he told Kare 11. ‘We are taking back pride.

‘It is really sad times. It has been a month since George Floyd’s death and that still impacts a lot of people.’ 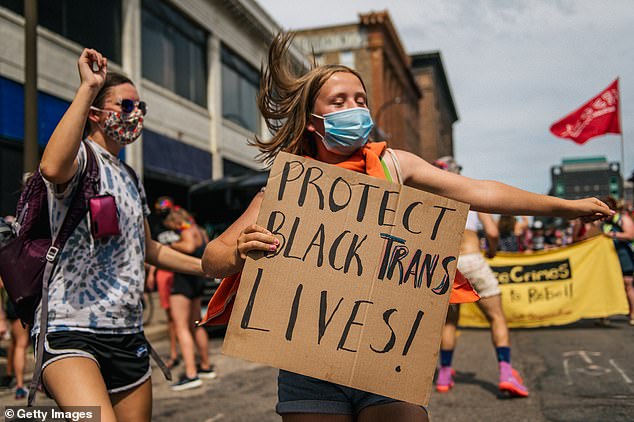 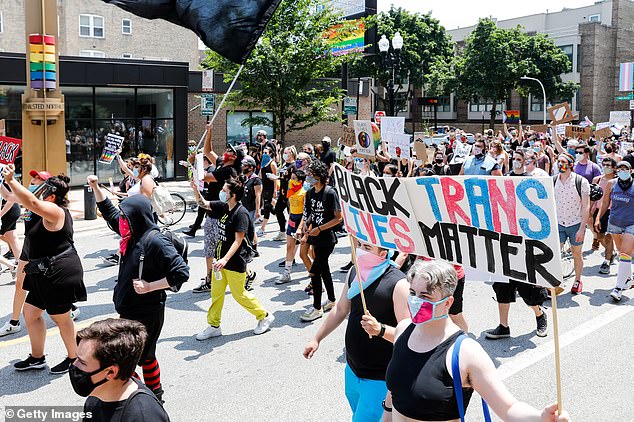 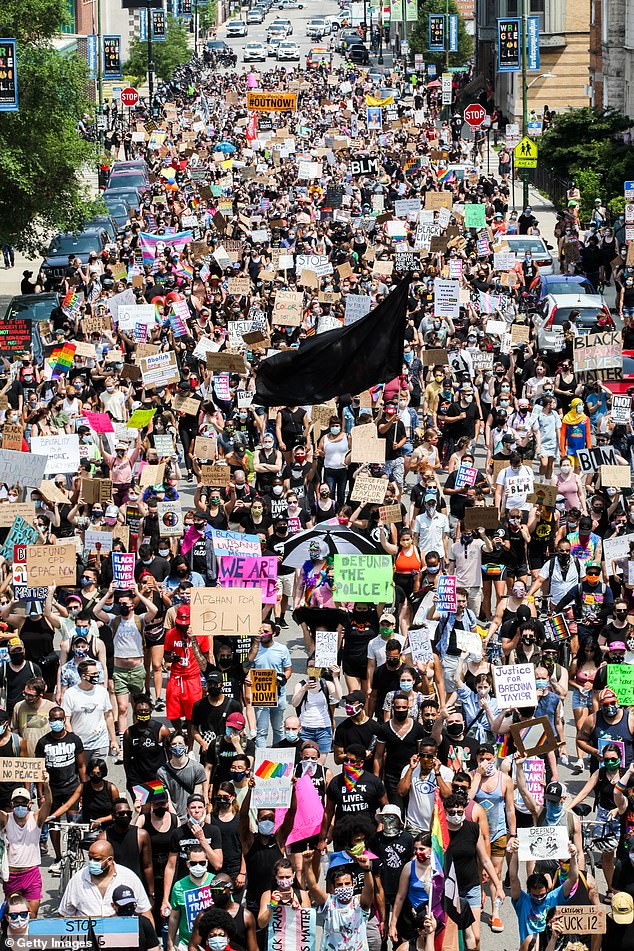 Thousands gathered in the streets for the Pride Without Prejudice march in Chicago, held on Sunday 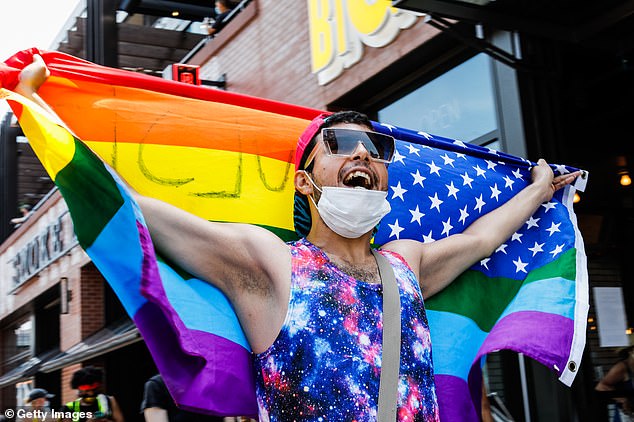 The march in Chicago drew a large crowd but was smaller than the traditional parade, with COVID keeping people at home