By Peter Lee For The Daily Mail

In 2015, I was a member of a Department of Transport committee examining the use of drones in conjunction with the Civil Aviation Authority, Ministry of Defence and the police.

We discussed what was needed to combat the rogue use of these devices and the technical challenges involved. We knew that security measures needed to be implemented right away.

Perhaps if we had been listened to, more than 1,000 flights would not have been cancelled at Gatwick this week.

The technology to stop rogue drones exists. A number of prisons now employ ‘geo-fence’ systems to stop drones illegally delivering drugs and other contraband items to inmates. It cuts their radio transmission and the device either falls to the ground or returns to its launch point.

Authorities made a three-pronged effort to bring the drone down, as Gatwick said it was confident the ‘military measures’ in place would keep passengers safe

Clearly Gatwick Airport didn’t have an effective system – which seems astonishing. And as a result, upwards of 110,000 passengers were forced to sleep on airport floors.

On Thursday night it appears our panicked security services scrambled to deploy an Israeli Drone Dome System to down the drone. Indeed, for much of yesterday, the runway was open and flights operating.

This unprecedented event – in which one of the world’s largest airports has been brought to a standstill – has exposed how woefully unprepared Britain is for dealing with trespassing drones.

Understandably, disgruntled passengers found it hard to believe that small airborne devices can wreak such havoc and seem impossible to stop – or that their operators have, so far, not been traced.

But jamming the radio signals that control a drone is not as simple as one might think. For a start, there might not be any radio control signals to jam.

A standard drone available on the high street comes with a hand-held remote control unit that allows the operator to direct it in much the same way that people have controlled model boats and planes for years.

But more advanced drones have a built-in micro-processor – a mini computer – as well. This allows a moderately skilled operator to pre-programme a flight into a drone. 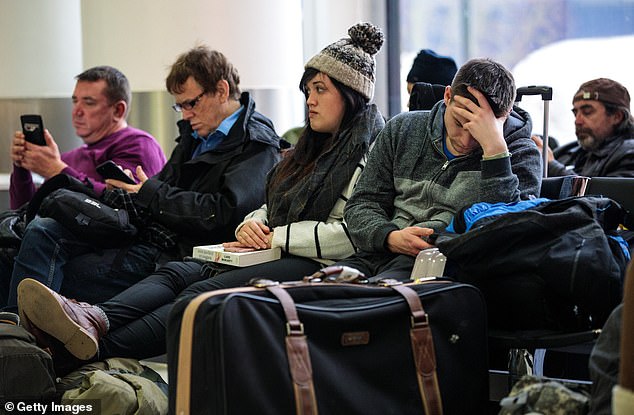 Another day of misery: Passengers wait at Gatwick’s South Terminal today, as the crisis entered a third day. The drone flew over the airport again on Friday evening, prompting another closure of the runway

A conventional remote control may be needed for take-off – although some drones can be launched through a mobile phone app. The drone would then effectively fly itself, with no radio signals between the remote and vehicle to jam.

But even in remote-control mode, jamming signals between a drone and the operator can be tricky. A drone signal is relatively ‘small’ and hard to detect against a background of tens of thousands of other signals from mobile phones, radio-links and wi-fi routers.

Without the advanced Israeli military jammer deployed, the only way the drone signal could have been jammed would have been with high-power interference. However, this could also knock out mobile phone networks and communications systems used by the police and military.

Nor could the police and military resort to less technical methods. They rightly decided against shooting down the drone. Drone flight paths can be very erratic and if the marksmen missed, there would be associated risks.

While I appreciate passenger exasperation, I understand the authorities’ reluctance to act just for the sake of being seen to do something, particularly in the absence of a pre-rehearsed contingency plan.

Which brings us to the crux of the matter – that Britain’s second biggest airport was not drone-proof in the first place.

We did not have the appropriate technology nor the political will – let alone a coherent plan. It may be three years too late but I suspect that is about to change.

Peter Lee is a drone expert at Portsmouth University