The owners of a bakery chain linked to a string of salmonella cases have been forced to temporarily close their stores.

There have been at least 15 cases of food poisoning caused by salmonella found in Vietnamese pork rolls in Adelaide over the past week.

Owner of the stores at the centre of the outbreak, Lakhina Eung, said they will close  three Angkor bakery stores to be thoroughly cleaned. Owner of the stores at the centre of the outbreak, Lakhina Eung, said they will close three Angkor bakery stores to be thoroughly cleaned

She told Yahoo News the stores will also be renovated and staff will be retrained on safe food handling.

The three stores that will close are at Springbank Plaza in Burton, Hollywood Plaza in Salisbury Downs and Blakes Crossing in Blakeview.

Ms Eung said the doors should reopen next week.

A sign posted on the door of the stores reads: ‘There has been an unexpected incident regarding out Asian meat rolls. We sincerely apologise for what has happened.

‘We have no intention of harming anyone. For those who have been affected, no words can say how bad we feel about this incident and the impact it has on any families.

‘We are working together with the council and SA health to investigate the root cause of this, and we are working toward preventing this incident from happening again.’ 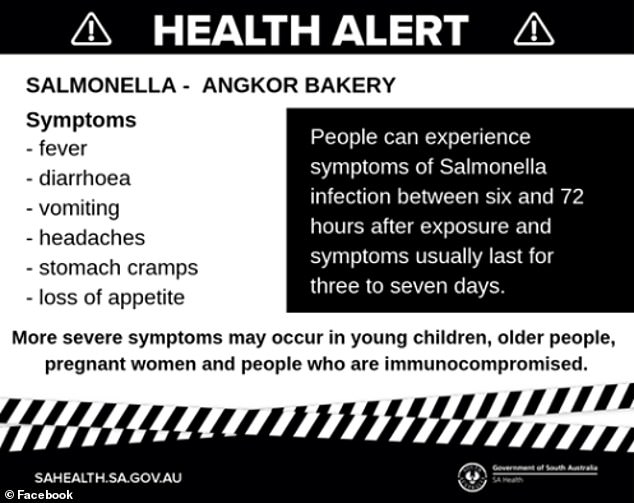 ‘The businesses complied with a council request on Tuesday to cease using these ingredients and, from today, the businesses have agreed to cease selling all Vietnamese rolls until the source has been identified,’ she said.

‘Cleaning and sanitising procedures have also been assessed and improved, and will continue to be monitored.’

Those who have come into contact with the contaminated food may experience the symptoms between six and 72 hours after exposure.

The symptoms can last for three to seven days.