Three suspects, who have been accused of shooting dead a Papa John’s manager, went home to eat the pizza they stole from him while he was out on a delivery, according to Indianapolis police.

Drake, who was a Papa John’s driver and manager, had not been scheduled to work on Monday, but he came in to help his co-workers.

Drake (pictured), who was a Papa John’s driver and manager, had not been scheduled to work on Monday, but he came in to help his co-workers

According to Fox 59, a neighbor saw Drake walk up to a vacant rental home and noticed the suspects’ car parked near her house.

She quickly jotted down its plate number.

Another witness told authorities that they saw the suspects leave the home with a rifle and a pizza bag.

Authorities were able to track the vehicle to a nearby apartment building, where the suspects were eating the pizza they had stolen from Drake.

Police said the men also confessed to shooting and killing Drake inside the complex.

Drake’s co-worker and friend Cheyenne Pryor told the Indianapolis Star that Drake was ‘a good young man, a great employee and a great manager’.

Pryor went on to say that because Drake was a manager he knew ‘he had to do what is needed from him, and if it was to fill in or stay later he would’. 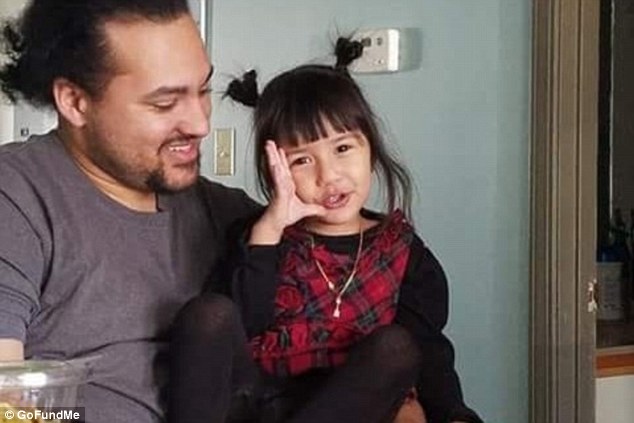 Drake’s co-worker and friend Cheyenne Pryor said Drake (left) was ‘a good young man, a great employee and a great manager’. A GoFundMe account has been set up for the Drake family

She said Drake was called in to help with delivery on the night of the shooting.

The Drake family started a GoFundMe page shortly after learning of Drake’s death.

‘We aren’t expecting the full amount, we just want to make sure we have enough to cover all his expenses including the funeral.

‘If you could, please help our family in our time of mourning so that we can provide him the best possible send off,’ the family wrote.

Papa John’s said in a statement to the Star that the company is ‘extremely saddened’ by Drake’s death.

‘Our thoughts go out to his family members, teammates and friends during this difficult time,’ a spokesman said.

The company also said that Drake’s funeral expenses will be covered under the company’s workers’ compensation policy.

Terry and Epeards face preliminary charges of murder and robbery.

Dale faces a preliminary charge of murder, according to court records.