Officials have ordered that all residents evacuate their homes following a second explosion at the TPC Group plant in Port Neches, Texas.

The first explosion went off at 1am at the petrochemical plant and has continued to burn since 1am on Wednesday, sending billowing smoke into the air.

In a video shared on Facebook, footage of the second explosion shows what appears to be fiery structural pieces shooting into the air.

As a safety precaution, county officials have asked that residents in the cities of Port Neches and Groves evacuate the area.

12 News Now reporter H. Tyler Seggerman says that as of Wednesday evening, residents living in Nederland and  in a four mile radius have been told to evacuate.

The American Red Cross had previously set up a shelter at the First Baptist Church in Nederland. 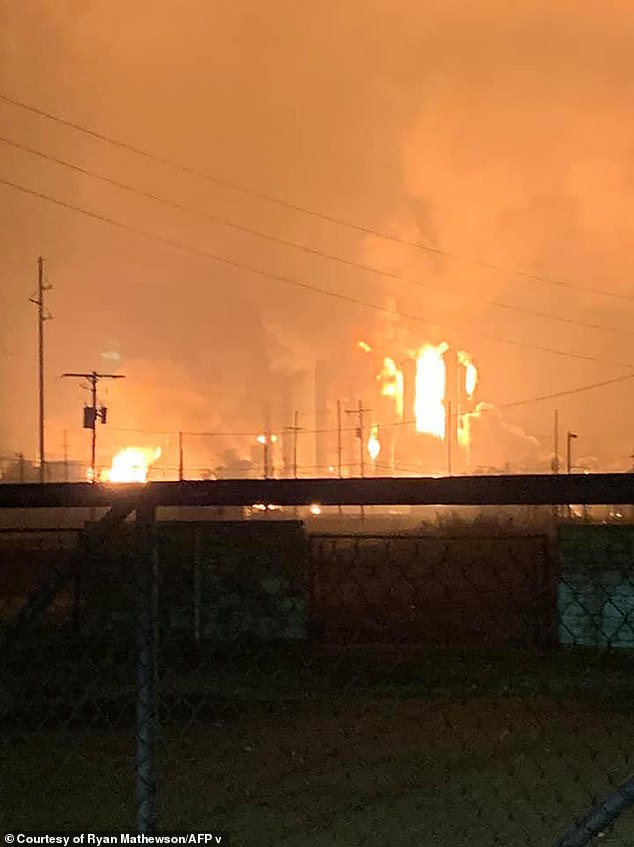 Pictured: The initial explosion at TPC Group that set off around 1am on Wednesday morning and continued to burn as emergency services workt o contain the flames 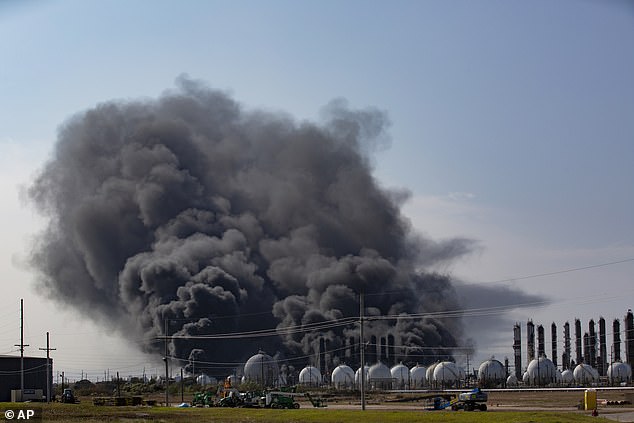 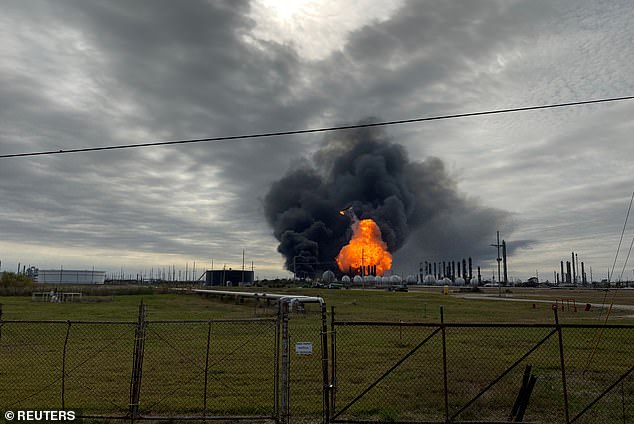 Officials have ordered residents in Port Neches, Groves and Nederlands to leave the area after a mandatory evacuation was implemented

As firefighter’s battled the blaze, locals affected by the blast were forced to clean up shattered glass and boarded up windows that were blown out throughout town. 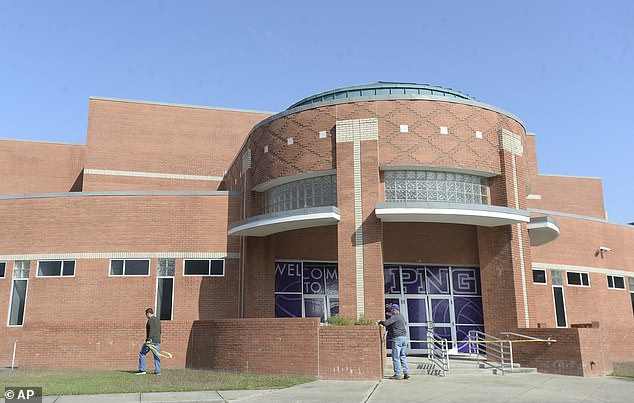 Pictured: School administrators tape off the entry way to the high school gymnasium after the force of the blast pushed in the doors 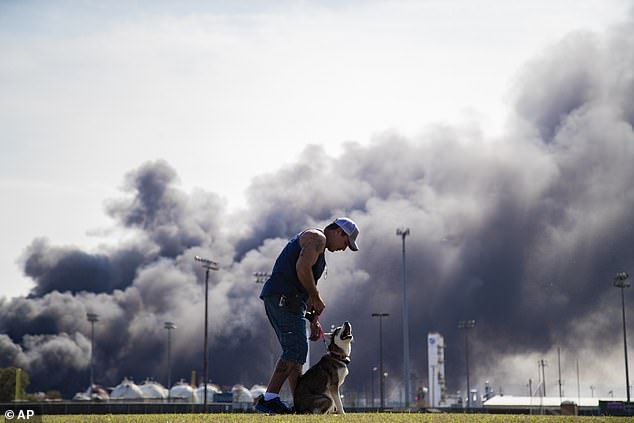 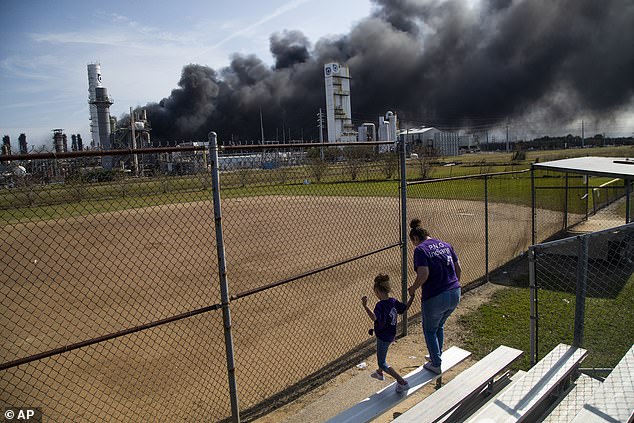 Earlier in the day, the Jefferson County Sheriff’s Office said a mandatory half-mile evacuation zone was put in place around the burning plant, and people were told to leave their homes.

From around 8am to 12pm, the Southeast Texas Alerting Network, or ‘STAN,’ released an alert calling for a shelter to be placed for all Port Arthur residents north of Highway 73.

A shelter was previously ordered for the entire city of Groves, but was lifted around 6.30am. 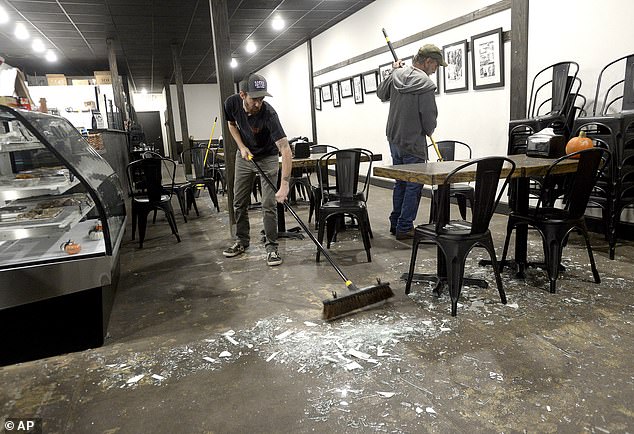 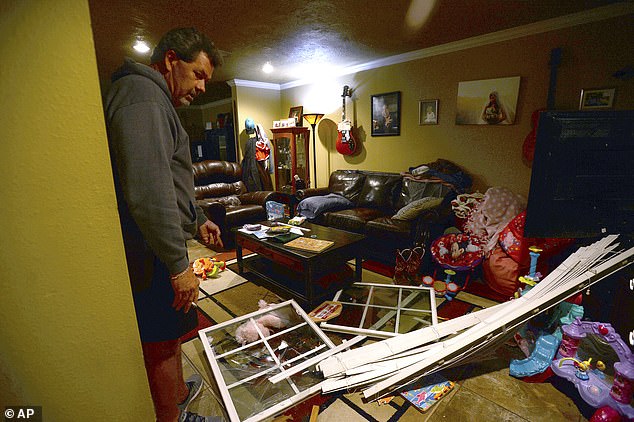 Currently, Highway 366, or Magnolia Avenue, is closed between Highway 365, or Nall Avenue, and Spur 136.

At least three people have been injured after a powerful explosion at a petrochemical plant in Port Neches, Texas, today.

The initial blast around 1am on Wednesday shook homes up to 30 miles away. 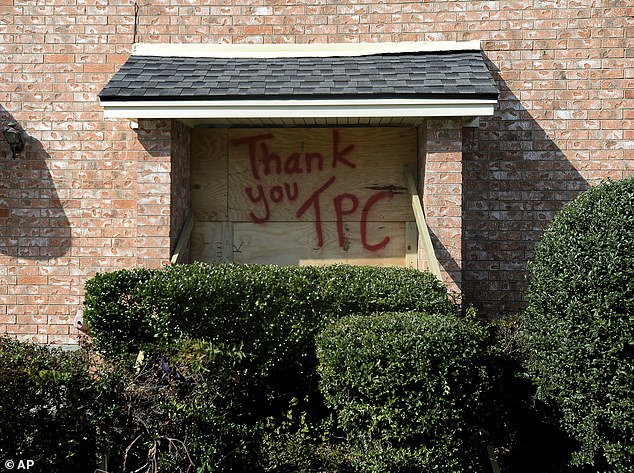 Pictured: One of the many boarded up windows found near the TPC group plant on Wednesday 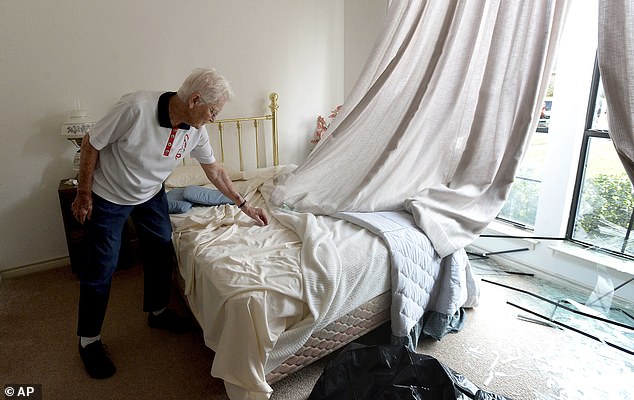 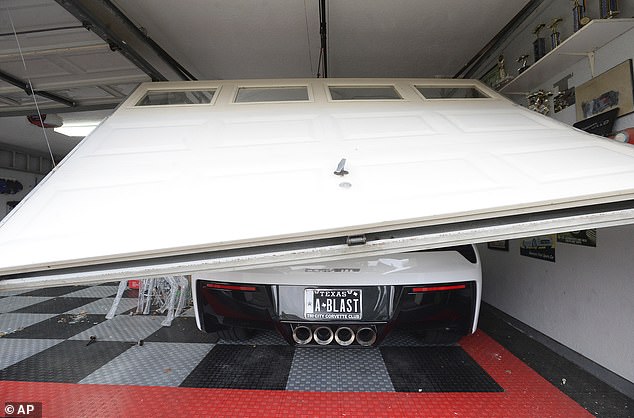 One resident’s garage door was blown back after the explosions, landing on a vehicle and leaving fallen debris behind

Crystal Holmes, Captain at the Jefferson County Sheriff’s office said they were ‘able to pull two injured employees out’ and take them to local hospitals.

A third person also received minor injuries, though Jefferson County Judge Jeff Branick said there were no fatalities, calling it ‘a miracle’.

Of the three injured, one was transported by a helicopter for burn wounds and one has suffered a broken arm. 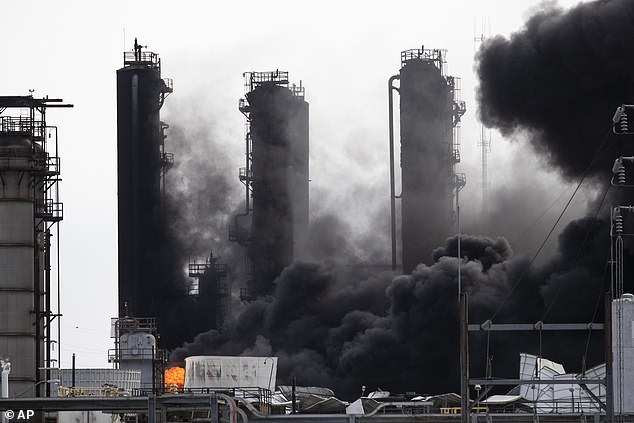 Pictured: Photos of the TPC group plant after two explosions went off 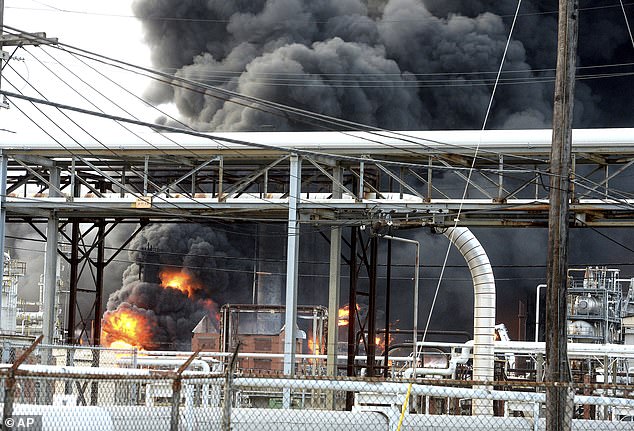 Troy Monk, director of health safety and security for TPC Group, told CNN that officials are focused on containing the fire and keeping nearby storage tanks cool.

Next, officials will shift towards extinguishing the fire and then investigating the cause.

‘Fire crews continue to battle the blaze. Right now it’s contained and not going anywhere but it’s not under control,’ Crystal Holmes said. 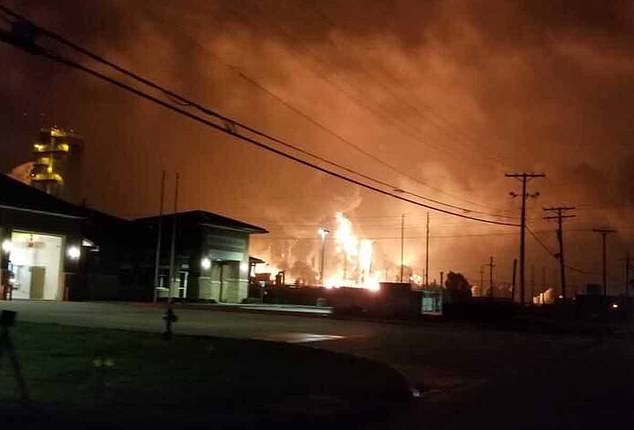 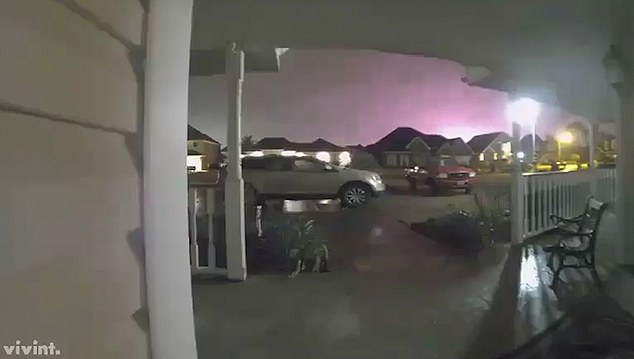 Local businesses had walls and windows blasted aside by the force of the explosion, which was captured on nearby home CCTV systems 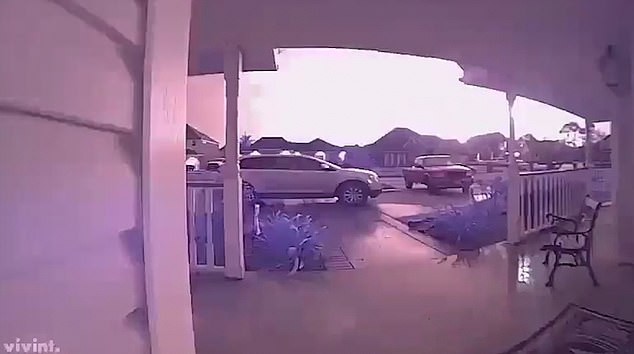 People living up to 30 miles away reported feeling the blast, while those living in nearby Port Arthur and Bridge City said the explosion felt ‘like a bomb’

Hilda Lorena, who uploaded footage of the burning plant to Twitter, wrote: ‘[It] felt like a big bomb had hit. Shook the whole apartment, praying everyone is OK.’

Meanwhile Omar Hamza, who lives 15 miles from the site of the blast, uploaded photos that showed the windows of his apartment had been blown out by the shockwave and his garage doors had buckled inwards.

Ryan Mathewson, who lives roughly two minutes from the plant, told AFP: ‘We woke up to glass all over us and parts of the ceiling caved in, (and) doors blown in.’

The 25-year-old said he and his family were ‘shook up and scared’ following the blast.

Local reporter Jillian Fertig uploaded images of a street of shops just feet away from the blast where walls had been knocked down by the force of the explosion. 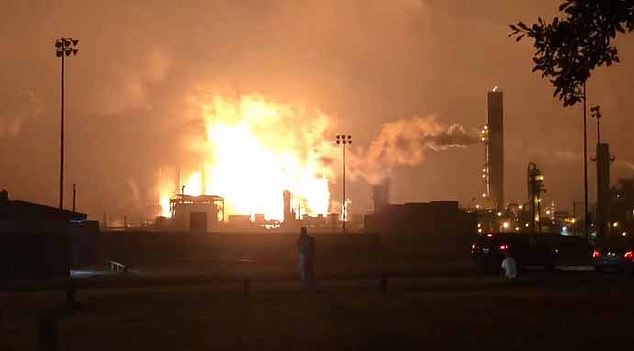 Sources said the initial blast was followed by several smaller ones, with firefighters now on scene trying to prevent further explosions 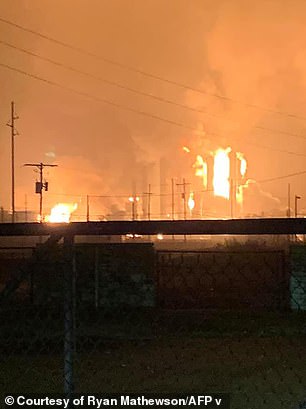 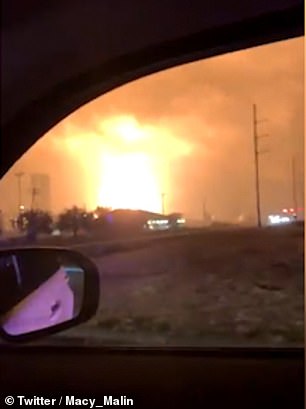 TPC Group, which operates the plant, said the explosion happened in a ‘processing unit’, but could not give an explanation as to why it blew up

The explosion was so large it also showed up as a hot spot on local weather radar, while the National Weather Service picked up the smoke plume via satellite.

TPC Group, which operates the plant, said the explosion happened in what it said was a ‘processing unit’ at around 1am local time (0700 GMT).

‘The event is ongoing, but will be brought under control as quickly and safely as possible.

‘At this time, personnel at the site have been evacuated. We have accounted for all site personnel and three personnel have sustained injuries and are being treated.

‘Right now our focus is on protecting the safety of responders and the public, and minimizing any impact to the environment.’

The Port Neches plant is around 85 miles (135 kilometers) from Houston.

More than 200 people work at the facility, according to TPC Group’s company website.

The facility produces butadiene, a flammable gas used in the production of synthetic rubber, and other petrochemicals such as butane.

A shelter for those forced from their homes has been opened at a church in Nederland, local media said.