A Pennsylvania mother was shocked to get a call from her three-year-old daughter’s preschool notifying her that the little girl had smuggled her pet fish into class – inside her suppy cup.

Lauren Scanlan’s daughter Peyton loves her fish, named Mermaid, ‘so much’ – so last week, she took it along to preschool in the only portable tank she had.

The swimming stowaway went undetected by both mom and teacher until snack time, when the teacher noticed something inside Peyton’s cup and rang Lauren up to let her know.

Lauren Scanlan was shocked after her three-year-old daughter, Peyton, brought her pet fish to school in her sippy cup, and revealed that she drank from it before her teacher noticed

Lauren clearly found the humor in the situation and texted her cousin Connor Hughes, who shared a screenshot of their conversation to Twitter.

It quickly went viral, gaining more than 300,000 impressions since it was posted earlier this week.

‘Got a call from Peyton’s school today that apparently she smuggled her fish from home and brought it to school in her sippy cup,’ the first message from Lauren read.

When Connor asked Lauren if the fish had survived, she replied, ‘Yup… [it’s] alive. She apparently scooped it out of the tank, put it in her sippy cup and went to school.’

The little girl even drank from the water before her teachers realized that there was a live animal swimming around in it. 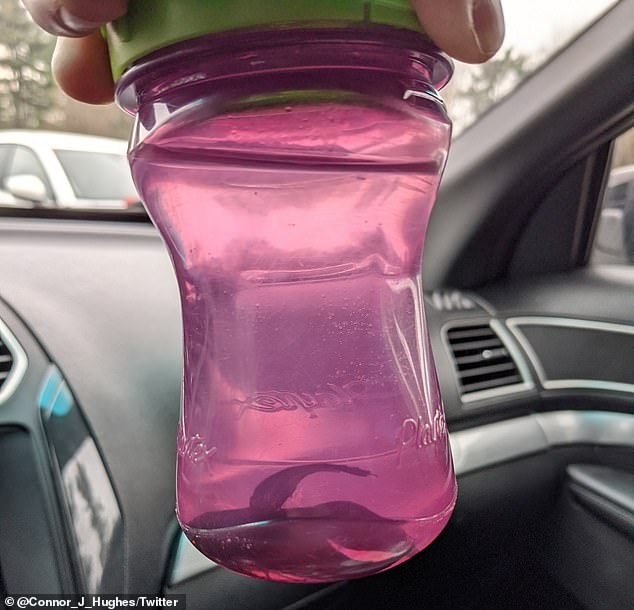 True love: Later, Lauren asked Peyton why she decided to bring the fish to school, and she told her mom it was because she simply ‘loves’ her pet ‘so much’

‘At snack time, she drank it and the teacher noticed something in it,’ Lauren continued in the text messages. ‘She forgot it was in there.’

Connor and his wife, Brieanne, recently got married and are considering having kids themselves – but this message may have changed their minds.

‘Having recently gotten married, @BrieHughes3 and I have started the discussion on having children,’ Connor captioned the screenshots. ‘I received this text message from my cousin today and I’m not sure we’re ready.’

Lauren also opened up about the moment to Today Parents, saying she was ‘mortified’ by the whole thing.

‘The director [of Peyton’s school] called, wanting to know if I knew that Peyton had brought her fish to school in her sippy cup,’ she told them with a laugh. 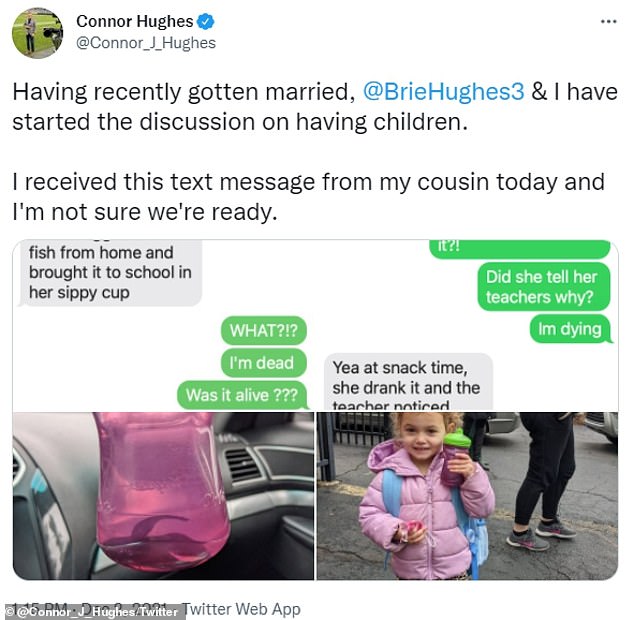 Lauren texted her cousin Connor Hughes about it. He shared a screenshot of their conversation to Twitter, and he quickly went viral for it 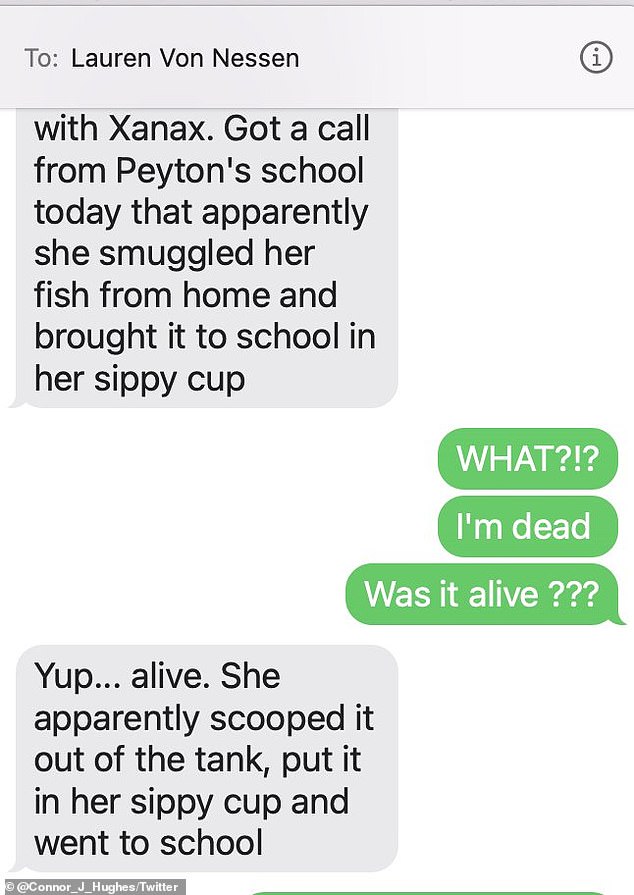 Lauren was completely baffled when her young daughter, Peyton’s school called to let her know that the toddler had smuggled in her pet via her sippy cup

‘I said no, I had no idea that Peyton had brought her fish in a sippy cup. I was mortified. I didn’t know what to say.’

Sher explained that earlier that morning, Peyton acted very suspiciously while she was feeding the fish, telling her mom not to come over to where she was doing it – but it didn’t occur to Lauren that she had put it in her cup.

She saw that her daughter had spilled some of the fish food on the ground, and thought that was why she was acting like she had done something wrong.

‘I told her it’s okay, that I would clean up, and then I didn’t think anything of it,’ she continued. ‘Peyton put her water in her backpack and we went to school.’ 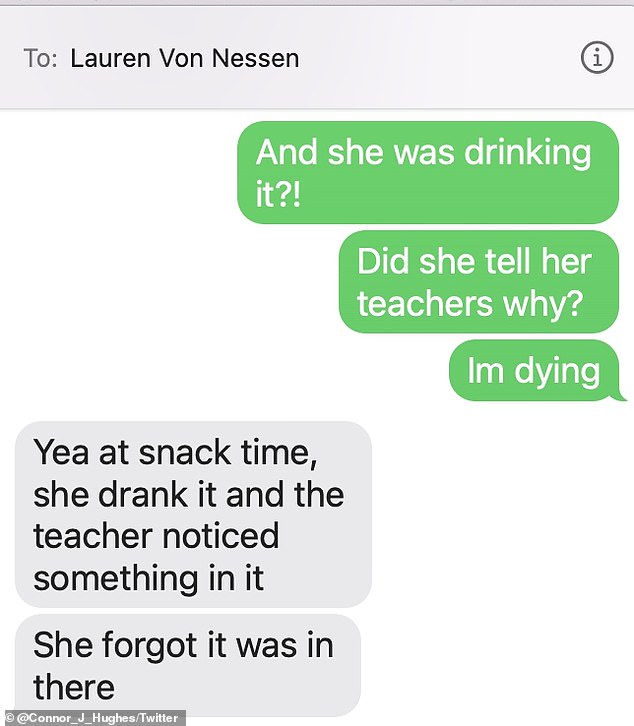 Want to know the worst part? The little girl actually drank from the water before her teachers realized that there was a live animal swimming around in it

Later, she asked the three-year-old why she decided to bring the fish to school, and she told her it was because she simply ‘loves Mermaid so much.’

‘She was a very good caregiver, and before she closed the sippy cup lid she did put food in it. So I can’t even be mad at her – she was a good pet owner,’ Lauren added.

She made sure to talk to her daughter about what is and what isn’t appropriate to bring to school.

She concluded: ‘I will be checking to make sure all of our pets are in their proper habitat before my kids go to school.’

Meanwhile, Connor, who lives in New Jersey, told the outlet that he and his wife were ‘crying laughing’ over the message from his cousin – but joked that it did cure their own ‘baby fever.

And if they do have children, he added, they will make sure their fish tank is ‘sealed shut.’