A three-year-old girl suffered a stroke after the chickenpox virus narrowed the blood vessels in her brain.

Lottie Evans was staying at a caravan park in Abersoch, North Wales, with her family on July 26, 2016 when she became clumsy, irritable and unable to walk.

After being rushed to Ysbyty Gwynedd hospital in Bangor, doctors initially diagnosed her with Bell’s palsy – temporary facial paralysis – before tests revealed her blood supply had been cut off to part of her brain.

Medics warned the youngster would unlikely ever walk or talk again, but further tests at Alder Hey Children’s Hospital in Liverpool two weeks later revealed she was well on her way to recovery.

Now five years old, Lottie – of Warrington – is like any other little girl despite enduring a second stroke.

Lottie Evans suffered a stroke on holiday triggered by the chickenpox. Pictured at just three years old in hospital after the ordeal, this caused Lottie to develop paralysis down the right side of her face, with doctors fearing she would never walk or talk again 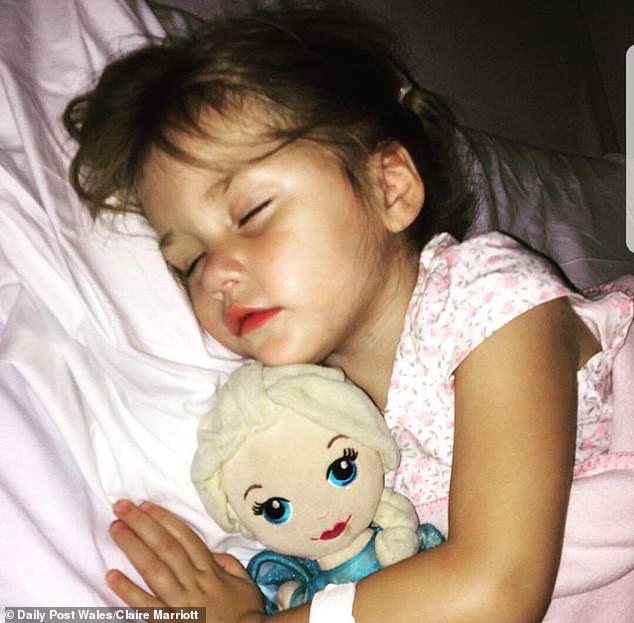 Pictured in hospital, Lottie’s parents assumed she was just tired when she became irritable and clumsy while at a caravan park in North Wales. She had chickenpox three months earlier

While on holiday, Lottie’s parents became concerned when they noticed their daughter was being unusually quiet and dropped four drinks.

The youngster – who had chickenpox three months earlier – also refused to eat and kept sliding off chairs onto the floor.

Thinking she was just tired, her parents put her in her buggy to sleep. But when she woke, Lottie kept falling over and could not even speak.

CAN CHICKENPOX CAUSE STROKE?

Stroke has been reported as a ‘rare’ side effect of chickenpox.

Dr Tina Tan, professor of pediatrics at Northwestern University, told Today: ‘Basically, the chickenpox virus infects the large blood vessels in the brain and causes inflammation in them.

‘The blood vessels can scar and that can decrease blood supply to the brain, which can lead to stroke.’

Studies have shown children are most at risk six months after they first become infected with the chickenpox virus.

This can leave youngsters with permanent disabilities, including paralysis or seizures, depending on which blood vessels are involved, Dr Tan said.

Other scary complications can include the blistering skin rash shingles, meningitis, pneumonia and dehydration if pox lesions develop around the mouth.

Despite her symptoms, Lottie’s parents still did not think it was anything serious and only took her to hospital on the recommendation of a paramedic who was away with them.

The couple made the hour journey to Bangor while their daughter was vomiting in the car.

Once there, they were told Lottie likely had Bell’s palsy, with the youngster then having two CT scans to confirm the diagnosis.

But it was a student nurse who happened to be in the room that mentioned she may have suffered a stroke.

Her parents worse fears were then realised when a scan confirmed the diagnosis.

Lottie’s mother Claire Marriott said: ‘At the time we didn’t think it was a stroke because most people don’t think children can have strokes.

‘We asked if she would recover and they told us that she probably wouldn’t, which was devastating.

‘Lottie could not walk or speak and had lost the use of the whole of her right side.

‘We were told the doctors had only ever known about one case where the person fully recovered.’ 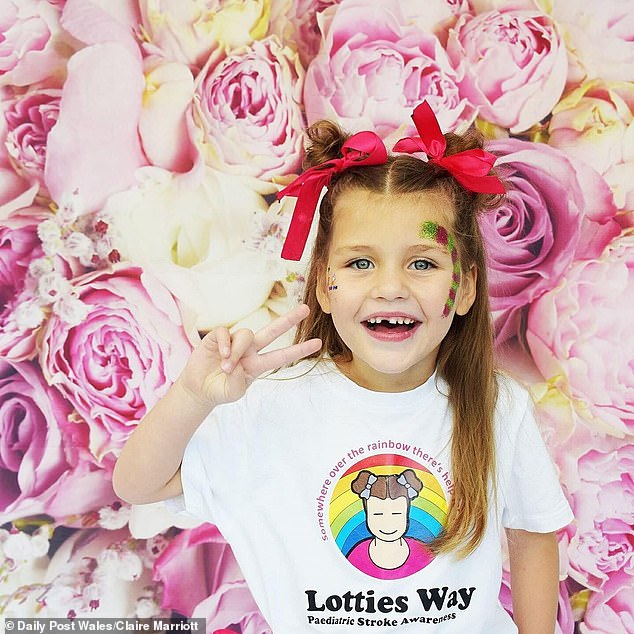 Now five years old, Lottie defied the doctors who said she would unlikely ever recover. Just two weeks after the ordeal, tests revealed the youngster was doing well. Although she still has slight facial paralysis and struggles to speak, her parents are confident her future is bright

The following day, Lottie was transferred to Alder Hey Children’s Hospital, where she stayed for two weeks.

Against all the odds, her parents were then told the youngster was likely to make a full recovery in just another 14 days.

‘At that point, we were given a ray of light,’ Ms Marriott said.

‘Doctors believe the stroke was caused by chickenpox, which had narrowed an artery in Lottie’s neck when she had the virus three months earlier.’

Five out of every 100,000 children has a stroke in the UK every year. Research has shown chickenpox can increase the risk of the condition in youngsters.

The virus behind chickenpox is thought to cause blood vessels in the head to narrow, according to the Stroke Association

Despite all these efforts, she still suffers from facial paralysis and struggles to speak but is gradually improving.

A routine MRI scan in January last year even revealed the youngster had suffered a second stroke but with no long-lasting effects.

She now takes an aspirin every day to reduce the risk of another episode. 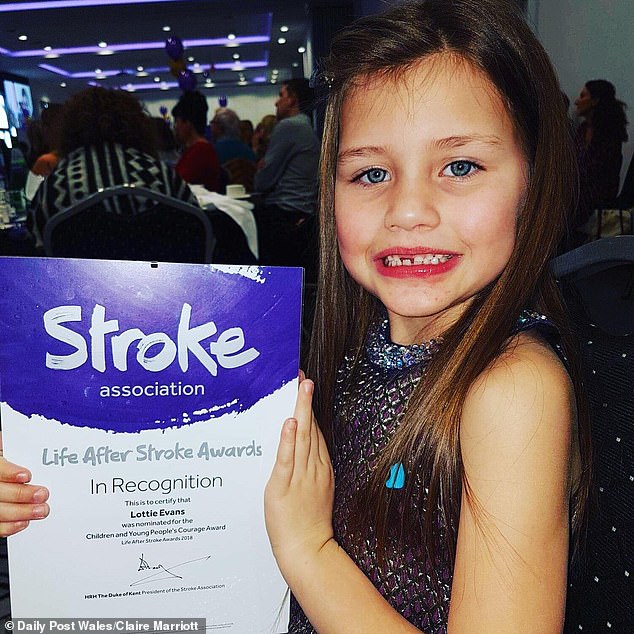 Lottie was nominated for a Life After Stroke Award last month. She is pictured at the ceremony

To raise awareness of the condition in children, Lottie’s parents have set up their own charity – Lottie’s Way.

‘Despite everything we consider ourselves blessed, many parents don’t get to take their children home from hospital after a paediatric stroke and tragically around the world stroke is one of the top ten causes of death in children,’ Ms Marriott said.

‘As a parent and being faced with uncertainty of what the future will hold and many questions I turned to Google for some support – what I found is there is no UK support groups for children and so I found myself with many questions unanswered.

‘I would like to get Lottie’s story out to give other parents the hope that although a child suffers a paediatric stroke, there is sometimes a positive outcome in the hope we can give another parent who goes through what we have a bit of support.’

Last month, Lottie was commended for her courage after being nominated for a Life After Stroke Award.

‘Our regional event highlights the tremendous courage people like Lottie have shown in rebuilding their lives after a stroke, or in helping others to do the same.’