Thrifty bride reveals she saved $15,000 on her wedding day by growing her own flowers

An eco-conscious bride from Canada who grew all her own wedding flowers claims she saved a staggering $15,000 on her big day.

Emma Tamlin, 29, and her 30-year-old from Ontario was concerned about pollution caused by the global flower market (not to mention the cost of wedding flowers following the pandemic) ahead of their wedding, and decided to solve the problem with some seeds, a little patience and plenty of nurturing.

By the wedding day in August 2022, Emma’s bridesmaids went to the garden on the bride and groom’s farm in Kawartha Lakes to cut flowers for their posies, while more flowers were used in table displays.

Eco-conscious bride Emma Tamlin, 29, and her husband Chris, 30 (pictured on their wedding day) from Ontario, Canada, decided to save on wedding costs and reduce their carbon footprint by growing their own flowers for their wedding day

Looking back on her cost-saving wedding hack, Emma said: ‘I had never grown anything before and generally thought of myself as someone who would never be able to.’

However, she explained a test run of growing flowers, helped by her mother Sharon, 58, and father Paul, 60, helped her gain the skills to grow on a larger scale so the flowers were ready for the big day.

Emma, a co-founder of an urban agriculture company, added: ‘I’ve grown up on this farm and moved there when I was nine, I always said I wanted to get married there – I never dreamed of growing my own flowers.’ 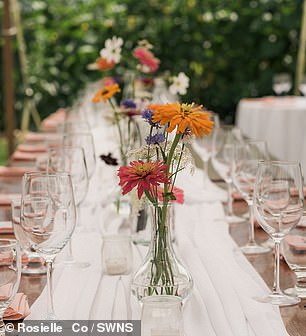 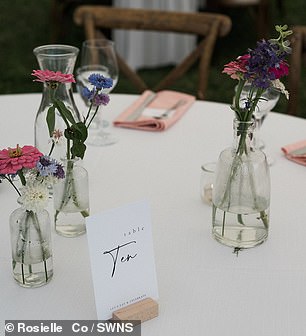 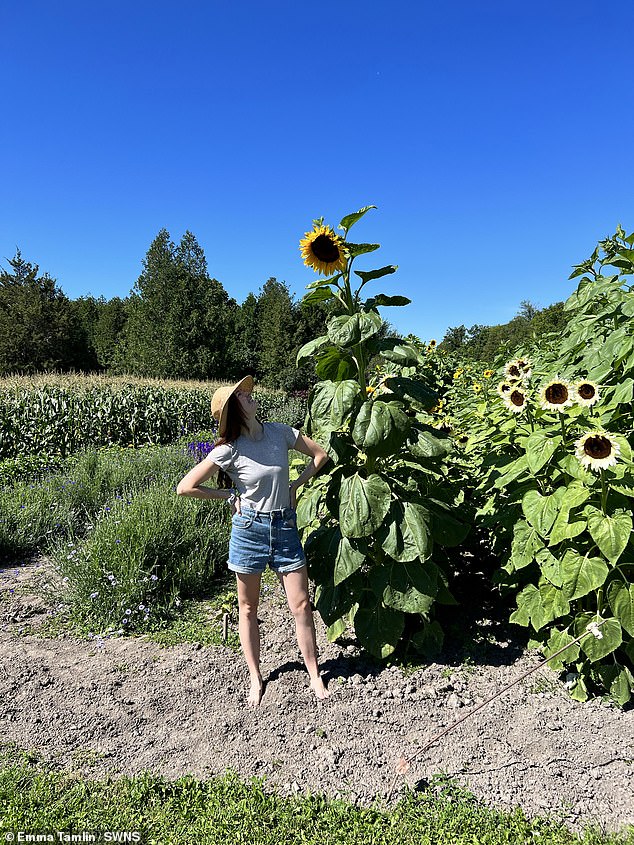 Emma (pictured) grew enormous sunflower plants on the farm’s land, which bridesmaids carried while walking down the aisle

However she added the year before the wedding, she and Sharon planted seeds which they ‘didn’t pay much attention to’ – until they started successfully growing.

After the trial run, the family decided they would grow their own wedding flowers and Sharon made a plan of action.

Ahead of the wedding in August, the family planted seedlings indoors in trays in March, which were planted into the earth on the farm in May.

‘We started seeing blooms on the first week of August,’ Emma said. ‘We weren’t sure they would last so kept pruning them.

‘Some things we didn’t get right – some sunflowers bloomed earlier than others, some plants grew too well and didn’t last until the wedding.’

Mother-of-the-bride Sharon was fundamental in the process and spent hours hand watering and weeding around the plants whilst her husband, Paul, ploughed the ground. 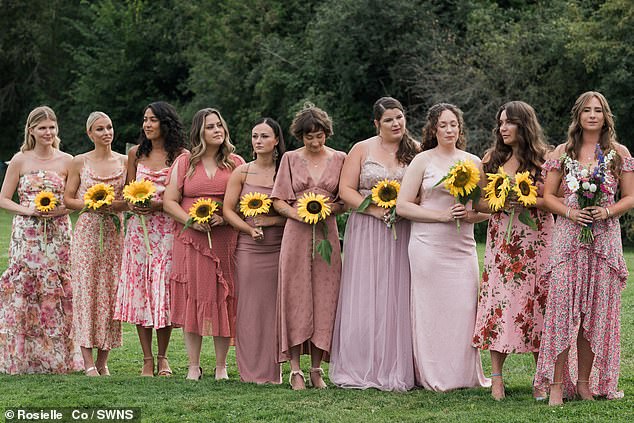 Miraculously, the garden was in bloom in time for the wedding and the bridal party picked and created their own bouquets the morning Emma walked down the aisle.

‘My bridesmaids and I made all the bouquets on the morning of the wedding,’ Emma said.

‘It took an hour to cut and two hours to make the vases.

‘It was an incredible feeling to make my own bouquet and to put it all together.’

The bride’s beautiful bouquet was made up of zinnias, cosmos, bachelor buttons and mallow, while the bridesmaids each carried a sunflower.

To lessen her environmental impact further, the bride didn’t buy any new decorations and recycled used yoghurt pots to use as candle holders.

‘We tried to have as little waste as possible, we used reusable cups and plates and I went round Toronto collecting used “Petit Pot” containers to use them as candle holders – they were the perfect size for a tea light,’ added Emma. 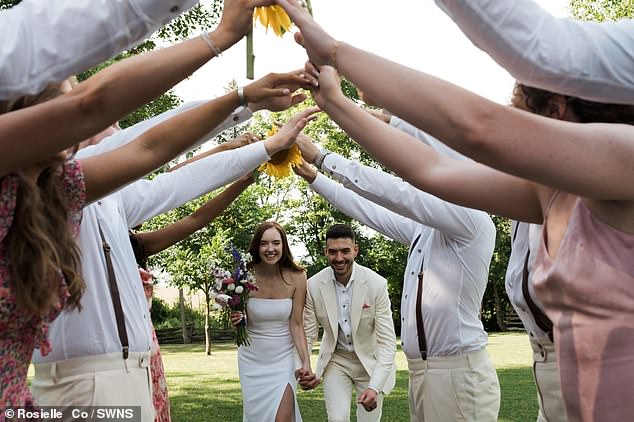 Emma and Chris (pictured on their wedding day) were concerned about the pollution caused by the global flower market, as well as the cost of wedding flowers 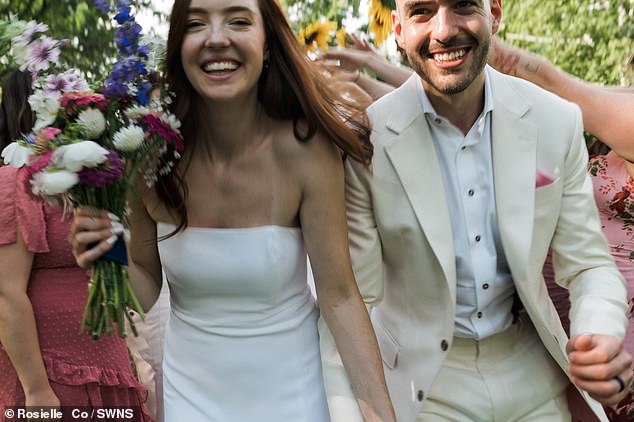 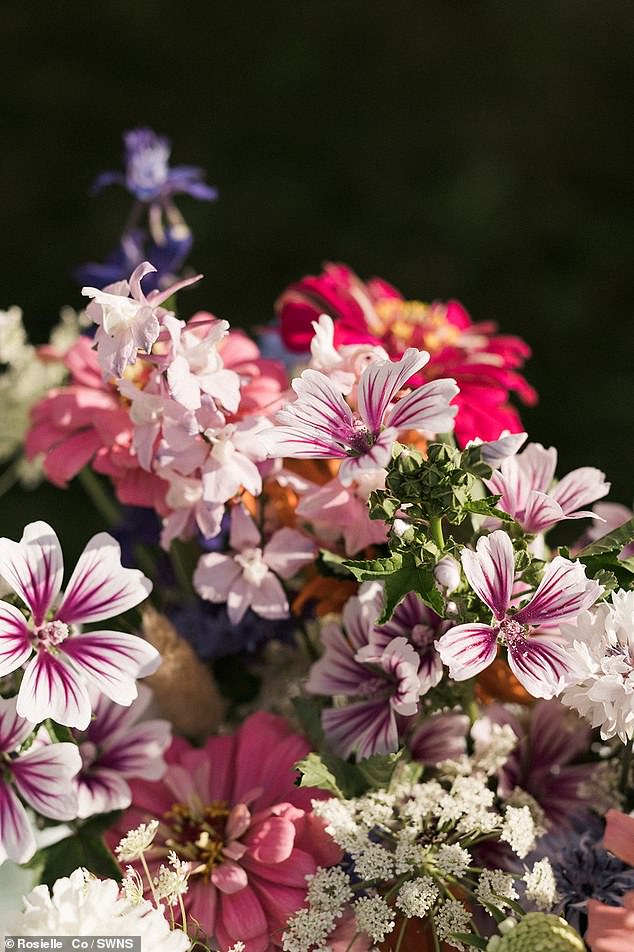 The eco-conscious bride opted to buy decorations of Facebook marketplace and bought her wedding dress from a sustainable Canadian brand.

She didn’t enforce a strict dress code on her bridesmaids – simply asking them to choose a pink dress.

‘It was an eco-friendly tactic as I didn’t want them to buy a new dress or to buy a dress they’d never wear again,’ Emma said.

‘Some bought them second-hand, and some have re-worn them multiple times.’

She said: ‘I know people who budget around $10k to $15k Canadian dollars for flowers and the seeds I bought cost between $400 and $500 – alongside the added cost of fertilizer and water.’

Despite saving a lot of money, the whole process took a lot of time and effort from the family, but it paid off in the end.

‘It was a lot more stress and my mum felt a sense of responsibility for everything, and it was a huge undertaking – but in the end it was so stunning and I’m so thankful to my parents,’ Emma said.

‘I’m so happy people want to do it themselves and they definitely can, of course it is more challenging in the city.

‘We used a space between 5,000 and 10,000 square feet but we didn’t use all the flowers and we wanted to have a lush garden for photos.

‘You could do it on a smaller scale and luckily we didn’t have any weather disasters.

‘We want to do it again to see if it was a fluke.’