A thrifty food blogger has revealed how kitchen novices can learn to love cooking in just four weeks – all for under £5 a day.

Amy Sheppard, from Cornwall, has launched her 30 Days To Love Cooking challenge, in a bid to inspire reluctant cooks and others who feel stuck in a rut when it comes to rustling up in meals in the kitchen.

She has designed a four-week meal plan, complete with delicious yet easy to cook recipes including chorizo carbonara and teriyaki chicken noodles.

And all the meals featured can be cooked on a budget, with the ingredients for week one costing just £35 in total, based on feeding four people.

Amy Sheppard, from Cornwall, has launched 30 Days To Love Cooking challenge, in a bid to inspire novices in the kitchen and those who feel stuck in a rut 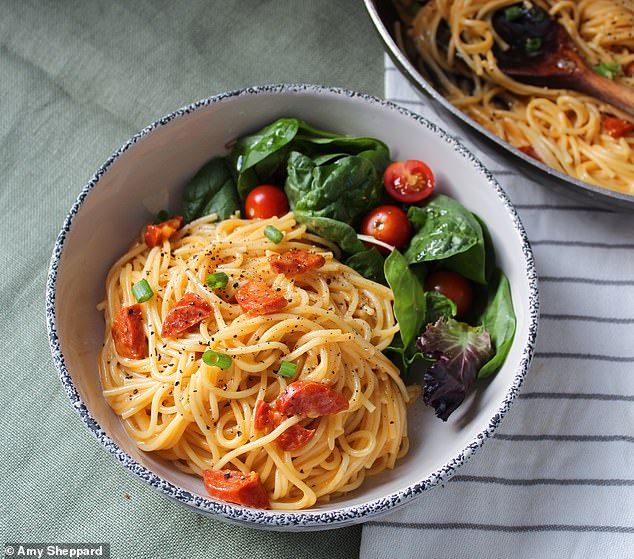 Recipes featured in the meal plan include Amy’s chorizo carbonara (above), which costs £2.39 to make four portions

Speaking to FEMAIL about why she decided to star the challenge, Amy explained how she herself had become stuck in a rut when it came to cooking.

‘After writing two cookbooks and despite cooking being what I do for a living, I fell out of love with cooking,’ she said.

‘Making dinner every night became just another job that needed doing, another chore. I felt like I was stuck in a cooking rut, making the same give  dinners on repeat, week after week. I wanted to get my kitchen mojo back!

‘I went through all of my recipes – and came up with some new ones – and found the ones that made me want to cook. 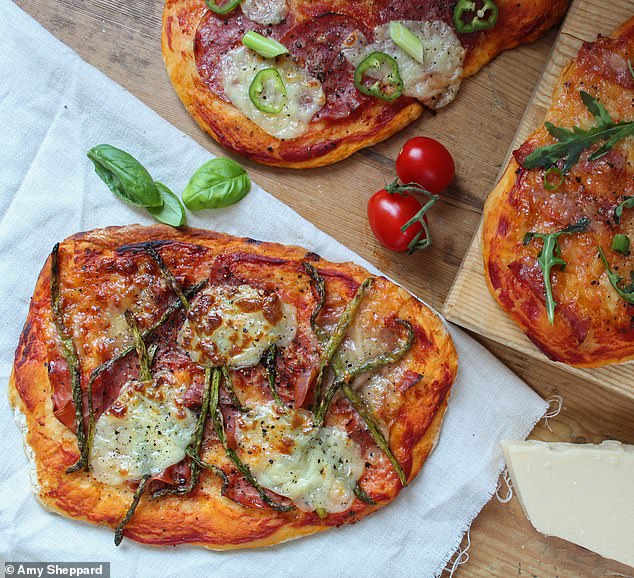 Amy’s no yeast pizza (pictured above) is also featured in her week one meal plan. It costs just over £3 to make four  portions 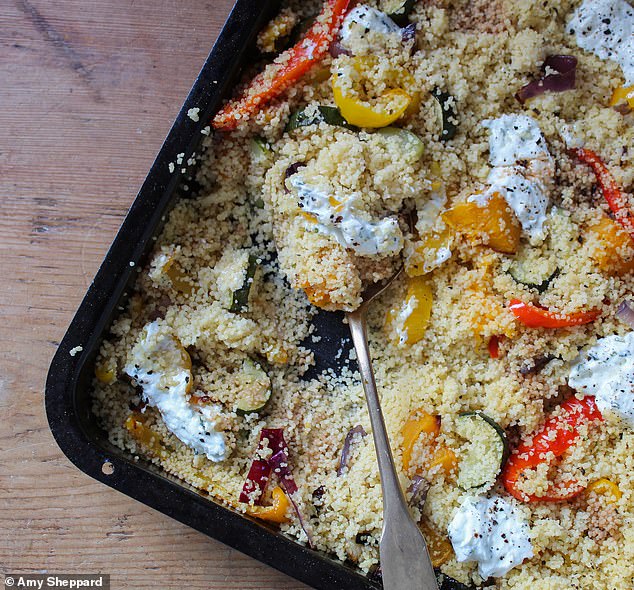 ‘Happy, stress-free food that I actually wanted to make. So I worked on the recipes and came up with four weekly meal plans.’

Amy, who wrote the The Savvy Shopper’s Cookbook, also gave her advice for those who aren’t very confident in the kitchen.

‘Keep it simple; the meals in this challenge are all quick and simple with straight forward instructions,’ she explained.

‘If you’re new to cooking or getting back into it, arm yourself with some easy recipes that won’t stress you. Pasta dishes, one pan meals and casseroles are all a good place to start.’

She added that planning meals, including prepping extra meals in advance, can also be helpful.

If you like a stir fry in your house, but you usually buy a packet or jar of sauce – this one’s for you! This recipe will show you that you don’t need many ingredients to pack loads of flavour into a meal. If you put the chicken in the fridge to marinate in the morning, you can get dinner on the table in under 20 minutes when you get home!

Swaps: If you’re not a fan of noodles, serve it with rice. Swap the broccoli for baby corn and the mangetout for green beans. Swap the chicken for skinless, boneless salmon steaks if you prefer.

Timesavers: Marinate the chicken in the morning and place it covered in the fridge. 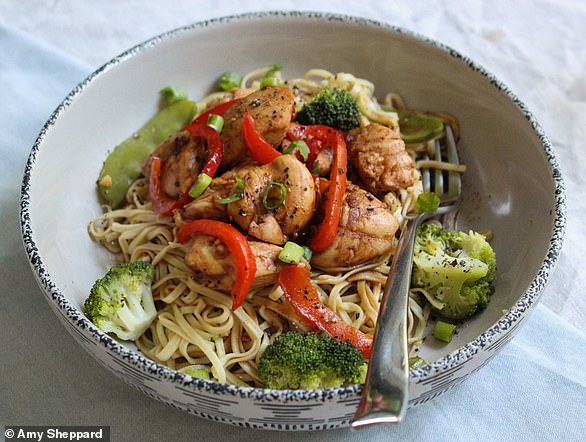 For the stir fry:

· A small head of broccoli cut into florets

· A large handful of mangetout

1. Mix all the marinade ingredients together in a bowl. Put the chicken in the bowl and cover in cling film. Place the bowl in the fridge for at least 2 hours.

2. Place the broccoli, onion, red pepper and marinated chicken (keep the bowl of marinade) in a large non-stick pan or wok. Drizzle in a little oil and fry on a low heat for 10 minutes, stirring regularly.

3. Pour over the remaining sauce and fry for a further 5 minutes, until the sauce has reduced a little.

4. In the meantime, place the noodles in a saucepan with the mangetout and a little salt.

5. Cover in boiling water. Bring to the boil and simmer for 5 minutes.

6. Drain the noodles and mangetout and divide between 4 bowls.

7. Check the chicken and veg is cooked through and serve the stir fry on the noodles.

‘Trying to scramble together a dinner from few ingredients, is not the route to happy cooking,’ Amy explained.

‘Plan weekly and use your planner to write your shopping list. It will save your time, money and sanity!

‘Prep food ahead wherever you can and make extras to freeze and eat on busy nights.’

Amy also warned newbies in the kitchen to not give up if things don’t go to plan.

‘Don’t give up. We all have kitchen disasters or nights where nobody appreciates what we’ve cooked. Write it off, don’t dwell on it, and don’t cook it again,’ she said.

To sign up for the free 30 Days To Love Cooking challenge, which begins on September 24, go to www.instagram.com/amysheppardfood