Thrifty man gives drab kitchen table a herringbone makeover for FREE with old vinyl tiles – and it looks so expensive!

A thrifty man has revealed how he saved himself hundreds by giving his drab kitchen table a trendy herringbone makeover for free.

Adam Bacon, 37, from Hailsham, East Sussex, explained how he recently had some time off from his job as a floor-layer and wanted to channel his energy into something creative.

Fed up with his black kitchen table, Adam decided to experiment with some leftover vinyl he had to achieve the look of a pricey herringbone alternative – which can cost up to £1,000 to buy new.

He told Latest Deals: ‘Our breakfast table was plain black, so I decided to give it an upgrade. I was inspired by the floor designs I have done at work, and so I came up with an idea for the table.

What Adam’s kitchen table looked like beforehand. The floor-layer wanted to channel his energy into something creative when he was recently off work

‘I wanted to give it the herringbone effect, with a black border and a [wooden-effect] trim around the outside.’

In order to achieve the luxury look, Adam used the vinyl tiles from a previous job through work – that would have cost £90.

Following the faux-grain, he then cut the vinyl into strips and laid it out in a herringbone-style pattern.

He continued: ‘The first step is finding the centre of the table, then working out how to arrange the pattern. Once it has all been laid out, take half of the tiles away and glue the table. Then, place them back and repeat the process on the other side.’ 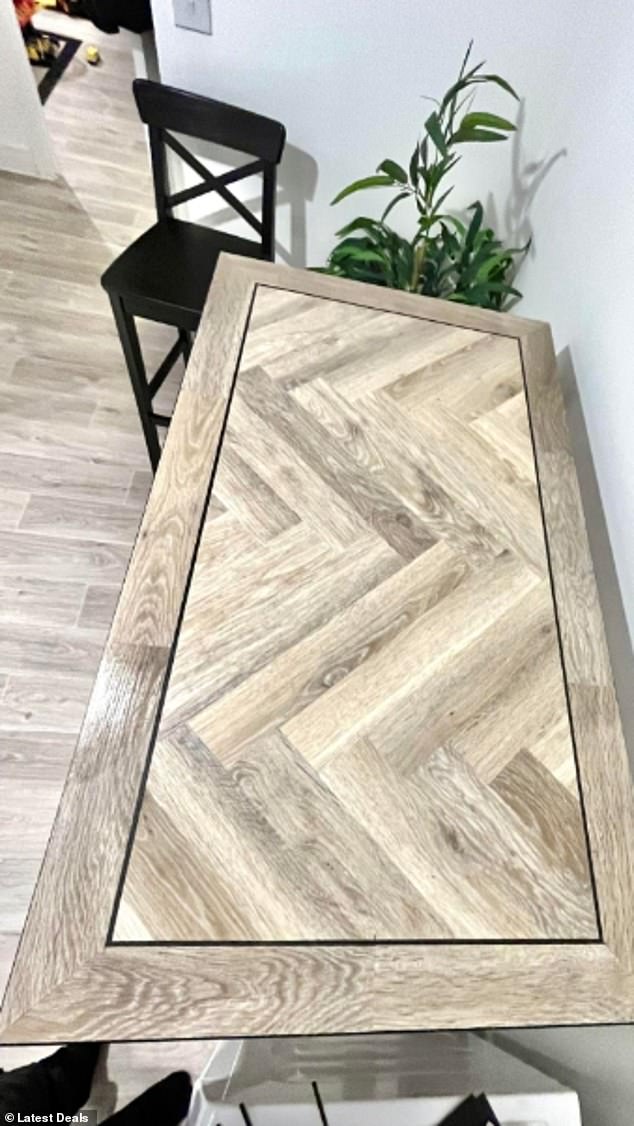 What the table looked like afterwards. Adam used the Karndean tiles from Hailsham Carpet Warehouse 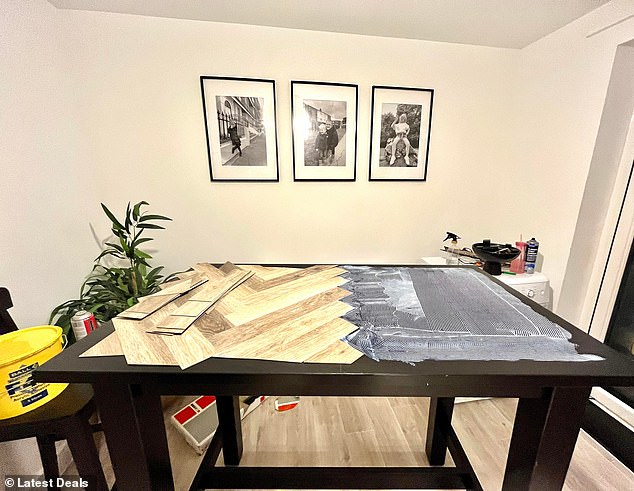 During the process. Adam glued the wooden-effect vinyl strips in a herringbone-style pattern before then repeating the process on the other side

Next, Adam then created a matching wooden-effect border around the outside using the leftover vinyl strips.

He continued: ‘Then I repeated the process. I enjoyed the job overall, but it was different as I am used to working on floors and this was higher up. Also, it was a much smaller surface area than I am used to.

‘I think if I was to do this again, I would invest in some nice gold trims around the sides, then fit the tiles against it. I think that would look very premium. I am very happy with the result and now the table has a luxury feel to it for a fraction of the cost.’

Tom Church, the co-founder of Latest Deals, said: ‘Even for those who aren’t lucky enough to pick up supplies for free from their workplace, Adam said they would have cost £90. That’s much cheaper than buying a brand-new herringbone table – I looked online and saw prices between £300 and over £1000! 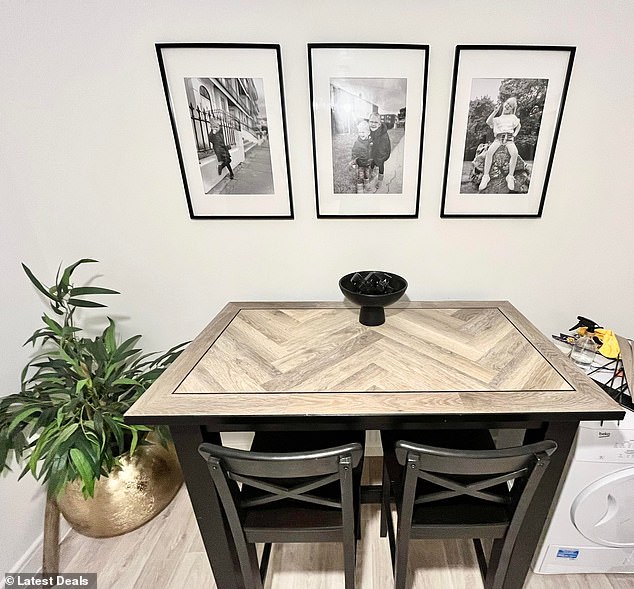 ‘‘Using luxury floor tiles is a great way to create a long-lasting and durable makeover, and I’m sure plenty of people will be inspired to use them on their tables after reading Adam’s story.

‘Luxury floor tiles, or LVT for short, make use of 3D imaging technology to replicate high-end styles such as marble, limestone, slate – or herringbone, in Adam’s case.

‘It’s a great way to upcycle your floors – or tables! – without spending £100s on a professional upgrade. It looks just as good, too!’

‘When you’re installing herringbone flooring, there are two types – LVT ‘click’ and LVT ‘glue down’. It looks like Adam has gone with the glue down method here, which can be a little more difficult as it’s more intricate. However, it isn’t impossible if you are willing to put in the time and patience.

‘Some key considerations are ensuring the surface area has been properly cleaned before you start work and also that you select the correct adhesive for your project.’