It’s no wonder the EmDrive has come to be known as the ‘impossible engine’ – such a device would be able to generate thrust without using a propellant, giving it potential to revolutionize space travel.

But, as it seems to defy the laws of physics, scientists haven’t quite managed to bring the concept to fruition.

While some researchers have claimed to make headway in the last few years, including a team from NASA and another from China, the experiments have been plagued by inconsistencies and results that can’t be explained.

Now, physicists from Germany have put the concept to the test as well, and their findings suggest the real explanation for the phenomena observed in prior studies may be far more mundane than expected. 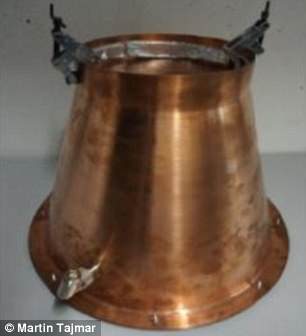 Physicists from Germany have now put the impossible engine concept to the test as well. The researchers built their own prototype devices to replicate the two thrusters – and, they uncovered a few issues

According to the new paper, interactions with Earth’s magnetic field may be responsible for the thrust observed in the controversial experiments.

In the study, presented this week at the Aeronautics and Astronautics Association of France’s Space Propulsion, researchers from Technische Universität Dresden discuss their ‘SpaceDrive Project,’ which aims to explore both the EmDrive and the Mach-Effect Thruster.

These are the two most prominent candidates in the race to develop the impossible engine.

‘The first concept uses microwaves in a truncated cone-shaped cavity that is claimed to produce thrust,’ the authors explain in the paper.

‘Although it is not clear on which theoretical basis this can work, several experimental tests have been reported in the literature, which warrants a closer examination.

‘The second concept is believed to generate mass fluctuations in a piezo-crystal stack that creates non-zero time-average thrusts.’

The researchers built their own prototype devices to replicate the two thrusters – and, they uncovered a few issues.

With the EmDrive, the team found that changing the direction of the thrust had no effect on the level of the thrust.

This was even the case when these changes should have resulted in zero thrust, they note.

WHAT IS THE EMDRIVE?

The concept of an EmDrive engine is relatively simple. It provides thrust to a spacecraft by bouncing microwaves around in a closed container.

Solar energy provides the electricity to power the microwaves, which means that no propellant is needed.

The implications for this could be huge. For instance, current satellites could be half the size they are today without the need to carry fuel. 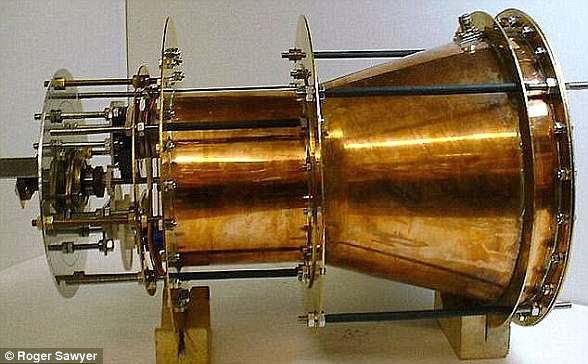 It’s no wonder the EmDrive has come to be known as the ‘impossible engine’ – such a device would be able to generate thrust without using a propellant, giving it potential to revolutionize space travel. A prototype is pictured

Its allegedly fuel-free nature also means the drive may directly contradict the law of conservation of momentum.

‘This clearly indicates that the “thrust” is not coming from the EmDrive but from some electromagnetic interaction,’ the researchers wrote.

‘Although we used twisted or coaxial cables as much as possible, some magnetic fields will eventually leak through our cables and connectors.’

With the Mach-Effect thruster, they noted similar effects, again indicating there ‘must be some electromagnetic interaction or thermally induced center of mass shift that is making any real thrust value.’

Though they may not bring us any closer to actually achieving the ‘impossible engine’ just yet, the findings could help future experiments weed out errors that have not previously been accounted for.

‘First measurement campaigns were carried out with both thruster models reaching thrust/thrust-to-power levels comparable to claimed values,’ the authors wrote.

‘However, we found that e.g. magnetic interaction from twisted-pair cables and amplifiers with the Earth’s magnetic field can be a significant error source for EMDrives.’