An A-level student celebrating her 18th birthday was glassed in the face by a thug after she was caught in the crossfire of a bar brawl.

Jess Coleman was left with a gaping wound in her forehead when she was attacked just 20 minutes after arriving at Five Bar in Huddersfield, West Yorkshire.

A thug, who has still not been caught, walked in off the street and attacked another man who was with two women nearby on Sunday night.

He then lifted a glass from an overhead rack at the bar and launched it across the room, but it missed his intended victim – and hit Jess in the face. 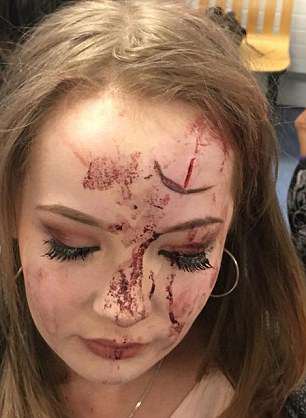 Jess Coleman (left) was left with a gaping wound in her forehead (right) when she was attacked just 20 minutes after arriving at Five Bar in Huddersfield, West Yorkshire

She said: ‘One of the women threw a drink and it splashed me so I grabbed a napkin from the bar and looked down to clean it off my arm.

‘Then I could tell a glass hit my head. I think I was just in his path.

‘I looked down again and saw the blood pouring down. I couldn’t see out my left eye because there was so much blood.

‘I fainted. I think it was from the shock.

‘The bouncer picked me up and took me upstairs to a first aider.’ 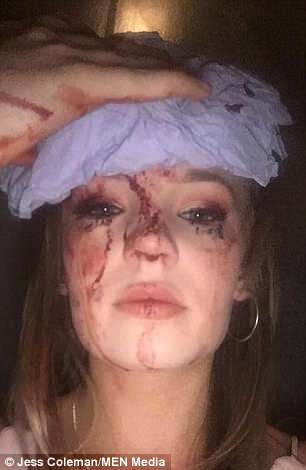 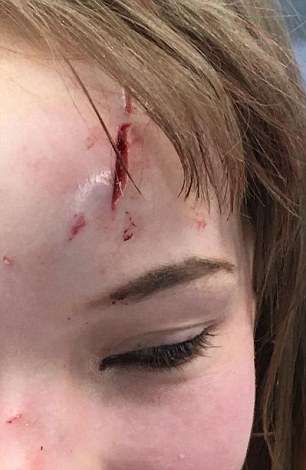 Miss Coleman, pictured moments after the attack (left) was left with the gaping wound (right) after she was glassed in Five Bar in Huddersfield 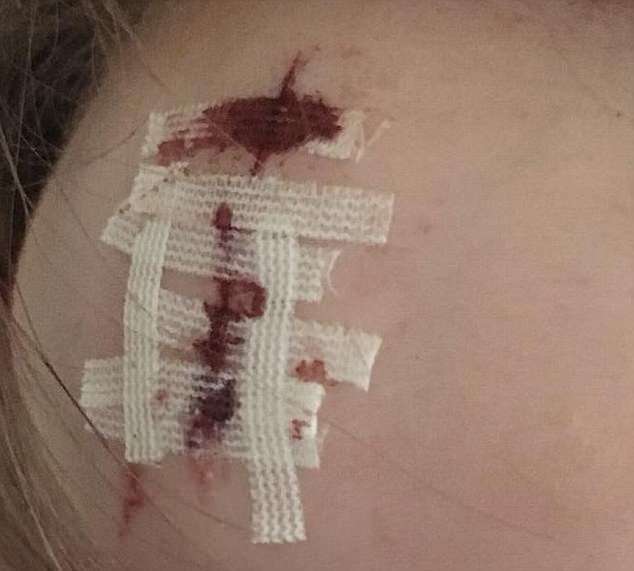 Miss Coleman, from Liversedge, West Yorkshire, had travelled into town with two of her friends and visited two bars before heading to Five Bar.

She said she had little to drink and is lucky she has a good memory of the incident.

The student at Mirfield Free, in Mirfield, West Yorkshire, who is in the middle of doing her A Level exams, said: ‘If I hadn’t looked down at my arm to dry it off, it could have been my eye or the back of my head [that was hit] and it could have killed me.’

A bouncer took her upstairs where she received first aid and emergency services were called.

But the ambulances were too busy and her parents had to come to the bar and take her to hospital, where the cut was glued.

Miss Coleman, who is due to start studying an events management degree at Leeds Beckett University in September, said: ‘I think the bar staff should have [tackled the fight] sooner when it was getting rowdy, but I think they handled the situation with me well.

‘The bouncer should have taken him outside, rather than further in towards the bar which was nearer the glasses.’

The suspect was described as black, around six feet tall and wearing a white shirt.

Miss Coleman’s sister Becky posted an appeal to identify him on Facebook and it was shared more than 800 times.

She said: ‘It’s not what I wanted when I’d just turned 18 and has knocked my confidence a bit.

‘I’m not a violent person, I never even argue – it’s annoying that the nicest people get the worst of it.

‘He needs to realise that his actions can hurt people other than just those he tries to hurt.

The incident happened at about 11.30pm – just half an hour after the bar switches to serving drinks in plastic glasses.

A spokesperson for Five Bar said: ‘We have done everything right that we could have done and we’re devastated, but it’s just the nature of the beast.

‘The incident was captured on five HD cameras and we’ve handed all the CCTV to the police.’

West Yorkshire Police confirmed there is an ongoing investigation, but were unable to provide further details.